Based on the wildly popular webcomic, One of Those Days chronicles the life and love of Yehuda and Maya Devir as they take on the minutiae of marriage, the ups and downs of daily life, and the paradigm shift of new parenthood.

“Bursting with life . . . We get to know them through one-panel installments as though they’ve walked straight into the room, introduced themselves, and moved in.”—Kate Beaton, #1 New York Times bestselling author of Hark! A Vagrant

Yehuda and Maya Devir began illustrating their life in comics when they moved into their first apartment together in Tel Aviv as newlyweds. In the years since, One of Those Days has become one of the biggest webcomics on the Internet, with millions of followers around the world. Yehuda Devir grew up on superhero comic books, and the Devirs’ visual style is downright kinetic and bursting with life.

In this collection—the first time that the Devirs’ comics have been compiled in one volume—they share stories that are heartwarming, hilarious, and universally recognizable. So even for those who don’t feel like pulling out an assault rifle to wage war on a kitchen cockroach, the Devirs’ challenges and triumphs are instantly familiar to anyone who’s had one of those days.

An excerpt from One of Those Days


To tell you the truth, One of Those Days wasn’t planned at all. It began as a few illustrations we made to show our daily lives in the style of a superhero comic. They were meant to be a personal blog, or Yehuda’s blog, to be exact, where he described what it was like to live with Maya. And, as an art director, Maya couldn’t resist overseeing character design and joined the team immediately.

We quickly realized that these comics could have power and impact when we created an illustration where we share a boiling-hot shower—perfection to Maya’s taste, while Yehuda is burning alive. That illustration went viral on social media, with millions of shares on different pages. And so we focused our energy on creating more, and One of Those Days was born.

The ability to share our private life in front of the whole world has not come easily to us. In the comics, we reveal a lot of non-photogenic moments and real struggles that we face on a daily basis, such as the difficulty we had getting pregnant. Maybe One of Those Days started from a naïve place in which we didn’t understand the exposure potential of social media. But we started to grow more comfortable with it when we saw the power it can hold and the happiness it can bring to readers.

This book is a collection of all of those relatable everyday-life moments from marriage and parenthood. We hope you can find yourself in them. 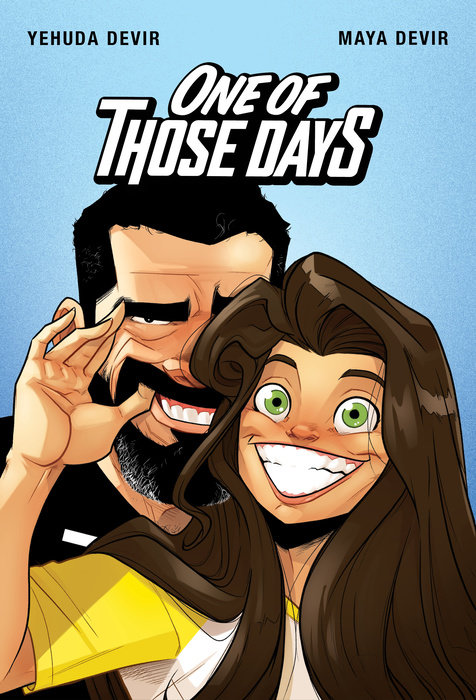