Plant-Powered Recipes for Fueling and Feeling Your Best

More than 100 delicious, nourishing, and mostly plant-based recipes for peak athletic performance, from the triathlete and nutrition coach behind the popular Running on Veggies blog

After finishing treatment for stage III Hodgkin's lymphoma at the age of fifteen, Lottie Bildirici fell in love with running and completely transformed her lifestyle with a mindful approach to eating and exercise. As an Adidas nutrition coach, she has led teams around the globe to healthier mindsets by leveraging their diets for enhanced performance. In her first book, she shares these recipes and tips to help fellow athletes eat well, feel well, and live life to its fullest potential.

In addition to Bildirici's recipes, Running on Veggies also features recipes contributed by world-class athletes including Kara Goucher, Colleen Quigley, Emma Coburn, and many more. With pre-run and recovery recipes, a two-week peak performance plan, and supplemental sidebars throughout, it's designed to be inclusive of all levels of athletic performance, from novice to expert.

Running on Veggies is the guide athletes and the rest of us need to fuel up and kickstart a lifetime of healthy habits, one delicious meal at a time.

An excerpt from Running on Veggies


My earliest childhood memories take place in the kitchen. It was the central hub of my home, and it was where I often joined my mother and grandmother, who seemed to be perpetually immersed in cooking and conversation. My family is famous for its legacy of preparing, cooking, and serving others. This legacy has been passed down from generation to generation.

I grew up listening to tales of my grandmother Lottie. It is tradition in my family to name your children after your parents. My grandmother was not fond of her name and convinced my mother’s sisters not to name their daughters after her. But my mom stuck to tradition, and although I have a handful of female cousins, I’m the only Lottie. I love being her namesake, and I think the fact that I’m the only other Lottie is no accident. I’m fairly certain I inherited more than her name. She was known for feeding the mailman every day when he delivered mail, and she would show up to her doctors’ appointments with fresh baked blueberry muffins. My journey toward making health, fitness, and nutrition my life’s work didn’t begin with that legacy, however.

In 2008, when I was fourteen years old, I was diagnosed with Stage III Hodgkin’s Lymphoma. I was a freshman in high school with few cares beyond friends, relationships, homework, and hobbies. The day was routine, like every other before it. I reached my hand up to remove my necklace when I noticed a bump on my neck. My parents’ immediate alarm scared me, and it wasn’t long before we found ourselves in front of the doctor who dropped the news into our laps: I had cancer. And in that moment, I went from high school freshman to cancer patient.

I knew the hospital hallways like the back of my hands: the vending machines, that one ugly painting they refused to take down, the room where they’d pump me full of chemo. My skin hollowed, my hair fell out. Eyebrows. Eyelashes. I felt like I was losing my identity. I wish I could say the nausea was the worst of it, but it was only a small part. Like all teenagers, I was desperate to fit in. But I couldn’t. My new normal was me trying to forget the alienating feeling of being sick and different in a world where conformity is king. By tenth grade, I had successfully pushed aside the psychological pain, wrapped it up, and locked it in a box in the attic of my mind so it couldn’t hurt me anymore—or so I thought.

I had succeeded (for the most part) in ignoring those painful months, but senior year of high school brought those memories back to light. A group of people from my neighborhood were going to Disney World to run a half-marathon and raise money for a community cancer center that had helped my family and me when I was going through treatment. It was the perfect opportunity to give back and also to give myself permission to speak a bit more openly about my experience. I had never run before, although I had always been athletic. I didn’t even know what it meant to run a 5K. As I did with all things in my life, I jumped in headfirst and put my all into the training. If I was going to do this race, I wanted to be prepared. After a few months of training, I showed up to that start line overflowing with emotions. I was a survivor, a warrior, a giver . . . and now, a runner. My story seemed to come full circle in that moment, and I finally felt healed—body and soul. Running that race was the first time I felt in control of my life again. On that starting line, I felt powerful, in control of my life, like I hadn’t before cancer. It was a jumping-off point.

After that race, I began to do some real thinking about what was going on in my body. Did I eat the right thing before the race? Was there a way to shave time off my best? Could I make a small change that might help me recover more quickly?

Unlike my battle with cancer, this was something I could control. I could control my input and output, make sure my body was getting what it needed, and account for every nutritional deficit. After being pumped full of drugs and heavy chemotherapy treatments, I felt like my body needed a reset.

I fell in love with athletic competition after Disney and went on to compete in multiple distance races. I got faster and faster, breathed better, reveled in the burn of muscle and the sharp exhales on otherwise quiet trails. Having researched food heavily and realizing its importance, I started creating healthier diets for myself. There were “healthy” foods and “unhealthy” foods. But it wasn’t just enough to limit or portion control the unhealthy foods—I had to eliminate them altogether.

You may know where this is going, but I sure didn’t at the time. Soon enough, it wasn’t just about eliminating those “unhealthy” foods but a genuine fear I developed when it came to those foods. I became food obsessed, a slave to my own phobia, terrified of upsetting the perfect utopia palace that was my body, my temple. I lost sight of the larger picture. I pored over ingredients, assessed macros, measured my servings, and weighed my portions. I barely blinked when my period stopped; hey, if all the best serious athletes also stopped menstruating, didn’t that mean I was a serious athlete too? The purer I became, the more my body deteriorated. Eventually, as a lifesaving measure, my body chose to rebel.

Looking back, what strikes me is not that I injured myself but that I was more upset about not being able to run than the seemingly spontaneous breakage of my body.

I was angry, frustrated, and disappointed. In trying to take control of my body after cancer, I had stepped over the psychological line between health consciousness and an eating disorder. My daily functioning had been taken over by the obsession and I found myself losing control once more. After my fourth stress fracture in four years, I finally realized that I needed to make a decided effort to reverse my so-called health obsession and begin my healing anew.

It took significant effort, but I soon began to associate food not as healthy and unhealthy options but rather as fuel. Restrictive eating became intuitive eating. The journey was not by any means easy—I suffered a few setbacks—but my recovery was steady and inevitable. As during that first race, I was determined to make it to the other side, emerge with a healthy body and mind.

Unfortunately, amenorrhea, eating disorders, and pathological relationships with food are all too common among female athletes. Throughout my own journey, I had connected with many people and found community within our struggles and triumphs. Education and support were critical for me, and I wanted to create a platform where the mutual learning and encouragement could continue.

That’s how Running on Veggies was born. It represented a shared mission: healing through food, running stronger, cycling faster, and preventing injury. I belonged. I have helped some of the best athletes in the world achieve their nutritional and athletic goals in the last decade. I even began sharing my cancer story—one I’d been so adamant in hiding and locking away in my effort to fit in and return to normalcy. Cancer happened to me; it didn’t define me. Looking back, I really wish I’d had a role model when my world was shattered, one who faced adversity head-on, who exemplified courage and strength, who wasn’t afraid to own their story. That’s why on the ten-year anniversary of my diagnosis, I competed in an Ironman triathlon—2.4-mile swim, 112-mile bike, and 26.2-mile run—not just to prove to myself and others I could do it but also as a platform to share my story openly and proudly.

My Ironman training helped solidify my theory of food as fuel, and I learned (through trial and error) how I could satisfy and propel my body forward efficiently. It was as much a nutrition game as it was an endurance challenge. I focused on recovery, making sure I was fueling with foods that would allow me to be ready for the next day’s workout. Working full time and training for an Ironman was intense. I was up before dawn most days, but I managed to take good care of myself. I didn’t always get a full eight hours of sleep in, but nothing could stop me from tackling this challenge. I learned I had to choose myself day after day, and part of my growth and healing was proving to myself that I could accomplish amazing things while being smart about my dietary choices.

After months of training and juggling an overwhelming schedule, the day of the triathlon finally arrived. Yes, my feet were tired and my muscles were screaming, but above all I felt an overwhelming sense of relief and pride—pride that my body was healthy and strong enough to keep going, put one foot in front of the other, push myself that much further. I finished and earned a spot in the Ironman World Championship in Kona, but ultimately I realized I had another calling. Although I still enjoy distance running, long bike rides, and a casual 5:00 a.m. swim, I wanted to focus on giving back. I wanted to inspire others to recognize the strength in themselves, to admire the beauty of strength and stamina. That is why I wrote this book.

Lottie Bildirici is an athlete, blogger, recipe developer, and Adidas nutrition coach. Certified by The Institute for Integrative Nutrition, she is a professional Holistic Health Coach. Her website and blog, Running on Veggies, reaches hundreds of thousands of followers every day, sharing delicious recipes and tips for what and how to eat to reach peak physical performance. She is known for teaching athletes how to leverage their diets to enhance their training, working with such organizations as Rapha and Enve, as well as running groups like Adidas Running, Nike Run Club, and more.

Plant-Powered Recipes for Fueling and Feeling Your Best 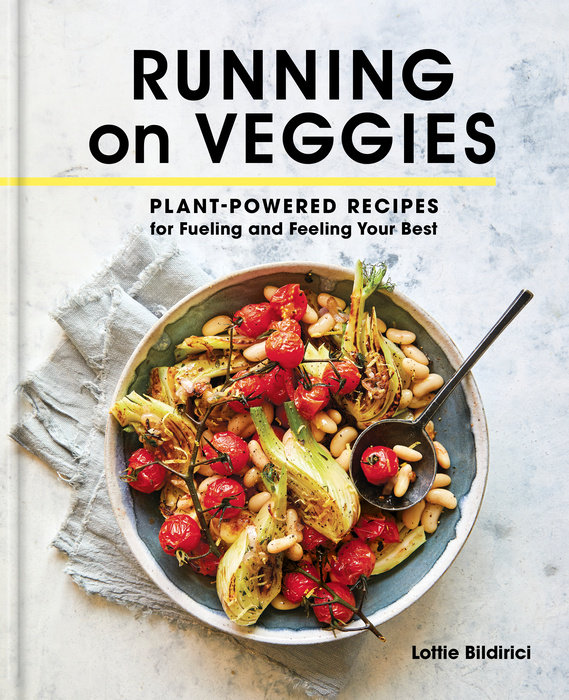