A Yogi's Guide to Crafting Your Destiny

NEW YORK TIMES, USA TODAY, and PUBLISHERS WEEKLY BESTSELLER
“Full of valuable insights to guide you.”—WILL SMITH
“Thoughtful and life-affirming . . . a must-read.”—TONY ROBBINS
“This book will put you back in charge of your own life.”—TOM BRADY

A new perspective on the overused and misunderstood concept of “karma” that offers the key to happiness and enlightenment, from the world-renowned spiritual master Sadhguru.

What is karma? Most people understand karma as a balance sheet of good and bad deeds, virtues and sins. The mechanism that decrees that we cannot evade the consequences of our own actions. In reality, karma has nothing to do with reward and punishment. Karma simply means action: your action, your responsibility. It isn’t some external system of crime and punishment, but an internal cycle generated by you. Accumulation of karma is determined only by your intention and the way you respond to what is happening to you. Over time, it’s possible to become ensnared by your own unconscious patterns of behavior.

In Karma, Sadhguru seeks to put you back in the driver’s seat, turning you from a terror-struck passenger to a confident driver navigating the course of your own destiny. By living consciously and fully inhabiting each moment, you can free yourself from the cycle. Karma is an exploration and a manual, restoring our understanding of karma to its original potential for freedom and empowerment instead of a source of entanglement. Through Sadhguru’s teachings, you will learn how to live intelligently and joyfully in a challenging world.

An excerpt from Karma

Sutra #1 Karma is about becoming the source of one’s own creation. In shifting responsibility from heaven to oneself, one becomes the very maker of one’s destiny.

In the Driver’s Seat

Once the pope went to the United States. His schedule was a busy one, with engagements in various cities. One day, he happened to be in Louisiana in a chauffeur-­driven stretch limo—­the vehicle that demonstrates the quintessentially American ability to stretch a limousine to its limits.

The pope was excited because he had never driven a car like this. He told the chauffeur, “I would like to drive.”

How could the chauffeur refuse the pope? He said, “Of course, Holy Father.”

So the pope took the wheel and the chauffeur took the backseat. The pope started enjoying the car and his foot got heavy on the gas pedal. He hit ninety and then a hundred miles an hour. He did not realize how fast he was going.

Now, the Louisiana police, known to be sticklers when it comes to speed breaking, swung into action. When the pope in the zooming limo saw the flashing light behind him, he pulled over to the shoulder of the road.

The cop got out and, carefully, with his hand on his gun, slowly approached the car. He looked in. He saw it was the pope himself driving! He peered into the back seat and saw somebody else sitting there.

He went back to his car, took out the radio, and called the police chief. He said, “Captain, I’ve got a real big fish.”

“No, somebody much bigger than that.”

“Sweet Jesus, have you got Al Capone?”

“Oh no, somebody much, much bigger.”

“What, you think you’ve got the president of the United States of America himself?”

“No, somebody far bigger than that!”

“Come on, who the hell can be bigger than the president of the United States? What have you got on your hands?”

The cop replied, “I don’t know, but he’s got the pope as his chauffeur!”

And that brings us to the crux of the matter: most people don’t have a clue who is driving their car!

Look around you. Ask yourself how many people you know are living with any real understanding of the crazy locomotive called life. Most people are passive pawns in the ride, clueless about how the machinery works, the source of its octane, how to manage its direction or its velocity, or, above all, who their chauffeur is. They talk of free will, liberty, and independence. But they have little or no control over their lives. Their destiny is something they create unconsciously.

Welcome to karma, a dimension that puts you squarely back where you belong, where you were meant to belong all along: in the driver’s seat.

With that we come to the central question of this book: What is karma?

Unfortunately, most people have understood action in terms of good and bad deeds. They see karma as a balance sheet of merits and demerits, virtues and sins. A life audit of sorts. To others, it is a ledger maintained by some divine chartered accountant who assigns some people to celestial bliss and consigns others to a nether world or into the maw of some recycling machine that spews them back into this world to suffer some more.

This is not merely false and absurd. It is tragic.

This notion has created generations of puzzled and fearful human beings who use the term indiscriminately, without a clue of what it means. It has spawned a brand of fatalism that has paralyzed vast segments of people and has been used to validate social injustices and political tyrannies of various kinds. It has also led to much spurious philosophizing and empty academic debate and has, of course, boosted the fortune-­telling industry!

Let us shatter the first myth.

Karma simply means we have created the blueprint for our lives. It means we are the makers of our own fate. When we say “This is my karma,” we are actually saying “I am responsible for my life.”

Karma is about becoming the source of one’s own creation. In shifting responsibility from heaven to oneself, one becomes the very maker of one’s destiny.

Karma is the natural basis of all existence. It is not a law that is imposed from above. It does not allow us to outsource our responsibility anywhere else; it does not allow us to blame our parents, our teachers, our countries, our politicians, our gods, or our fates. It makes each one of us squarely responsible for our own destinies and, above all, the nature of our experience of life.

So the only relevant question here is, Are you ready for karma?

Are you ready to hear about a dimension that is so empowering that it tells you that you are fully capable of taking the reins of your life into your own hands?

If not, read no further.

If you are willing, and if you are curious to find out more about how this mechanism works, this book could be your key. All you need to do after this is to fire up your engine and set off on your new life journey. Once you are at the wheel, your experience of the ride will never be the same again.

It is important to remember one thing, however. Karma is not a doctrine. You do not get any brownie points for subscribing to it. You do not get any negative marks for disbelieving it. Karma is not a creed, a scripture, an ideology, a philosophy, or a theory. It is simply the way things are. It is an existential mechanism. Like the sun, it operates whether you acknowledge it or not, whether you pay obeisance to it or ignore it. It is not looking for a fan club.

It simply turns you from a white-­knuckled, terror-­struck passenger in the backseat into a confident driver, in charge of the wheel, joyfully navigating the course of your own destiny.

To turn driver instead of passenger, however, you need to start by knowing a few basic rules about how the karmic mechanism works.

Instead, karma is action on three levels: body, mind, and ­energy. Whatever you do on these three levels leaves a certain residue or impact upon you.

What does this mean?

It is quite simple. Your five senses are collecting data from the outside world every moment of your life. You are literally being bombarded with stimuli at every instant. Over time, this enormous volume of sense impressions begins to assume a certain distinctive pattern within you. This pattern slowly shapes itself into behavioral tendencies. A cluster of tendencies hardens over time into what you call your personality, or what you claim to be your true nature.

It works in the reverse as well: Your mind shapes the way you experience the world around you. This becomes your karma—­an orientation to life that you have created for yourself in relative unawareness. You are not aware of how these tendencies develop. But what you consider to be “myself” is just an accumulation of habits, predispositions, and tendencies you have acquired over time without being conscious of the process.

Take a simple example. Some people may have been joyful children but are now unhappy adults. There may have been life events that triggered that unhappiness. But in most cases, people have no clue how and when they acquired this persona. If they had created their personality consciously, they would have crafted themselves quite differently. But somewhere along the way, by following the diktats of their unexamined reactions and tendencies, chronic unhappiness became their defining characteristic.

In other words, karma is like old software that you have written for yourself unconsciously.

And, of course, you’re updating it on a daily basis!

Sadhguru Jaggi Vasudev is a yogi, a mystic, and the founder of Isha, an all-volunteer organization engaged in large-scale humanitarian and environmental projects. He has spoken at the World Economic Forum, the United Nations, Stanford University, Columbia University, Harvard University, Wharton, and many other institutions.

A Yogi's Guide to Crafting Your Destiny 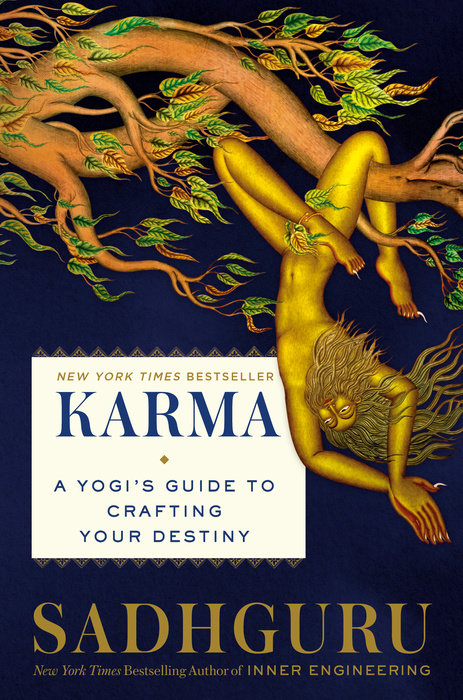