In a hypnotic tale of sisterhood, first love, and hauntings, a wedding in a small English village stirs up unsettling magic and forces a troubled family’s secrets out into the open.

“This beautifully written modern ghost story is an enchanting place to get lost.”—Danielle Trussoni, The New York Times Book Review

Lucia and her sisters grew up on the edge of Mockbeggar Woods. They knew it well—its danger, but also its beauty. As a lonely teenager, Kate was drawn to these sisters, who were unlike anyone she’d ever met. But when they brought her into the woods, something dark was awakened, and Kate has never been able to escape the terrible truth of what happened there.

Chloe has been planning her dream wedding for months. She has the dress, the flowers, and the perfect venue: Small Angels, a charming old church set alongside dense, green woods in the village that her fiancé, Sam, and his sister, Kate, grew up in. But days before the ceremony, Chloe starts to learn of unsettling stories about Small Angels and Mockbeggar Woods. And worse, she begins to see, smell, and hear things that couldn’t possibly be real.

Now, Kate is returning home for the first time in years—for Sam and Chloe’s wedding. But the woods are stirring again, and Kate must reconnect with Lucia, her first love, to protect Chloe, the village, and herself. An unforgettable novel about the memories that hold us back and those that show us the way forward, this is storytelling at its most magical. Enter Small Angels, if you dare.

An excerpt from Small Angels


It was Hag Night. The wedding guests—reluctant to part as stags and hens—gathered instead at the Albatross, the village’s only pub. They came in laughing, throwing the door wide open and letting in a smell of late summer, of warm earth and dying grass.

At the heart of the group were the engaged couple, Sam Unthank and Chloe Day, whose happiness that evening had a glow like candlelight. Drinkers smiled on them from afar, and the waitress brought them complimentary cheese and olives.

Tonight’s singer sat near the fireplace, a half-full glass at his elbow, his head bent over his guitar as if confiding something important. Still his voice reached every corner and curious alcove of the ancient pub. It was an old song—the Albatross made a specialty of old music—a story of long exile, lucky meeting, lovers reunited.

Most of the drinkers knew the tune well enough to hum along, chiming in for the chorus. Elizabeth Daunt, the village librarian, joined in without looking up from her book or setting down her gin and tonic. Even John Pauncefoot, the pub landlord—usually too shy to take part—sang a note or two, in a voice of surprising beauty.

Chloe—one of the few in the Albatross who had grown up outside the village—glanced at her bridesmaids (whose off-duty clothes somehow looked quite striking here, though they would have turned no heads in London). Her expression said, what did I tell you? She had promised they would find the village like this. There were so many quaint, lovely moments waiting to surprise a visitor. It was like tripping backward in time.

Brian Last joined them so adroitly that nobody noticed him setting his half-pint and packet of salt and vinegar crisps down on the table. As the song ended he turned to Chloe—who was radiant, ready to be feted, a bride already though the wedding was a week away—and said,

“You’re getting married this Saturday, I hear.”

“I mean that place up by the woods. St. Michael and All Angels. Big name for a little church. People mostly just call it Small Angels.”

“That’s quite pretty,” Chloe said. “If I’d known, I’d have put it on the invitations.”

Her praise, though well-meant, seemed to infect Brian with gloom.

“Cake ordered by this time, I suppose?” he said. “Wine bought? Guests invited?”

“Ages ago. You have to be organized, you know, planning a wedding. I finished my first to-do list eighteen months ago yesterday.”

Chloe waited for congratulations—on the wedding, if not the list—but there were none. Brian took a sip of beer and ate three crisps—all ominousness, all grim thought. The laughter of a minute ago smoked out and vanished.

“Good luck to you, then,” he said at last. “I suppose you know what you’re doing.”

“What are we doing?”

“No.” Chloe glanced at Sam—a local, unlike herself. “Nobody’s said a word. What’s wrong with our church?”

But he was too late to save the evening. There was no distracting Brian when he had a tale to tell.

Brian was a local historian, a curator of gossip. He had run the post office for several decades, carefully noting the address of every letter he franked. He lived alone with a Jack Russell named John Aubrey and a freezer full of meals that his wife had cooked for him before her death—neatly labeled lasagnes and shepherd’s pies on ice. The dog loved him and they were rarely seen apart. Tonight it lay quietly at Brian’s feet, watching as he spoke. Besides Chloe, it was the only creature in the Albatross to listen willingly.

They did listen, though. The wedding guests listened, and the rest of the pub listened too, letting conversations lapse. John Pauncefoot leaned against the bar, concentrating with a resigned air. Elizabeth Daunt set down her book and sighed, but did not depart. A family of diners fell silent, the children twisting in their seats to stare, ignoring their mother’s frown. The waitress set down her tray of dirty glasses and listened openly.

Brian had an earnest gaze, thin, restless hands that seemed made for dramatic gestures, and a long acquaintance with the acoustics of the Albatross. The singer by the fireplace—seeing that he had lost his audience for the time being—put his guitar to bed in its case and took his half-hour break.

“The thing is, Small Angels doesn’t rightly belong to the village at all,” Brian began. “It belongs to the Gonnes. Much good it did them.”

“Do you have to do this now, Brian?” Sam said. “We’re meant to be celebrating, and this is morbid stuff.”

“I don’t mind,” said Chloe. Snug in the Albatross, in her circle of well-wishers, in her happy love affair, she was ready for a gloomy romance—something grim howling outside to make the warmth and bright warmer and brighter. Sam said nothing further, and Brian continued:

“So, there’s a house out beyond the village. White walls, sitting by itself in the middle of nowhere—Blanch Farm. The Gonnes lived there for over a century.The family name changed from time to time, of course, but it was always the same people underneath. Ten years ago, there was a whole pack of them there.

“Selina—the old lady—was boss of the clan. I went to school with her husband, Paul. Not a bad sort. Quiet, mind you. Talked like words tasted bad. He and Selina had four granddaughters to bring up, and I never envied them that little task. You’d see those girls wandering the fields at all hours like they didn’t have a home to go to.

“Maybe they’d have picked up better ways if they’d gone to school, but they never stirred from Blanch Farm. People used to say that the old lady didn’t want to spend on the bus fare. Somebody should have stepped in, but no one liked to upset Selina.

“They were strange people. The thing was, they lived much too close to Mockbeggar Woods.” He turned to Chloe. “You’ve seen Mockbeggar, I suppose?”

“Just from outside,” Chloe said. “It’s near the church”—smiling, she tried out the newly discovered name—“near Small Angels. Isn’t it? I wanted to go in and explore but Sam said we couldn’t.”

“I should think not,” Brian said, frowning. “Nobody with any sense goes into those woods.”

Chloe looked around the Albatross, expecting a contradiction. But no one spoke. Sam had picked up the candle on the table and was tipping it so that the liquid wax threatened to drown the light.

“Only the Gonnes ever walked in Mockbeggar,” continued Brian. “People used to say it was just them and the dead.”

A sigh from Brian’s audience. Here was the meat of it at last.

“So this is a ghost story?” Chloe said, pleased and surprised.

“I don’t claim that part’s true, mind. I wouldn’t say that. All I know for sure is what the tradition is, and what I’ve seen and heard for myself.”

He looked around the Albatross. “They’d rather I didn’t tell you this stuff now. They listen, don’t they, though? Can’t help themselves. Because the thing is, we all knew that there was something going on. That’s where Small Angels comes in.

“The Gonnes were at Small Angels all the time, back in their day. It’s just up the fields from Blanch Farm, practically on their doorstep. God knows what they used to do there, but that church is more used to strange goings-on than it is to weddings, you can be sure of that. They kept the church key—had it for generations. The old lady used to wear it on her wrist.”

“This must be hers, then,” Chloe said. She took the key from her handbag and held it up so Brian and her guests could see. It was a gorgeous thing—dark metal, weighty. “They gave me it when I’d paid the deposit. Isn’t it pretty?”

Brian looked as if he wanted to ask to hold the key but didn’t quite dare.

Lauren Owen is the author of The Quick and Small Angels. She studied at St. Hilda’s College Oxford, and holds an MA in Victorian literature from Leeds University and an MA in creative writing from the University of East Anglia, where she was awarded the Curtis Brown Prize. 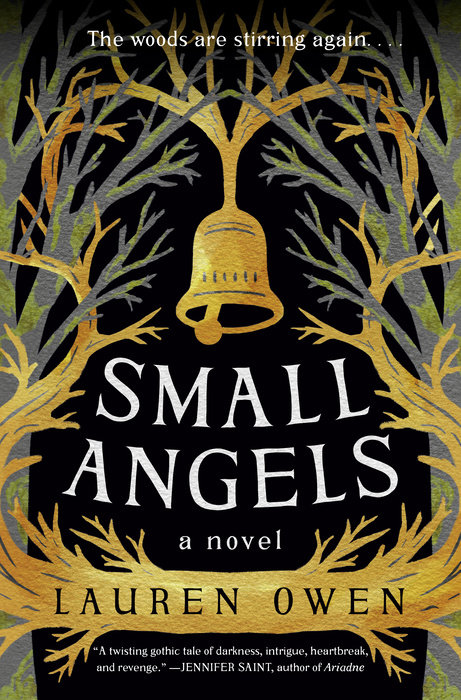