Step into the universe of Frank Herbert’s Dune, one of the greatest science fiction novels of all time.

Before Paul Atreides became Muad’Dib, the dynamic leader who unified the wild Fremen on the desert planet known as Dune . . .

Before the evil Baron Harkonnen overthrew House Atreides and sent Paul and his mother, Jessica, fleeing into the deadly wasteland of sand . . .

Before the secrets of the spice and the sandworms were discovered . . .

The tale of young Leto Atreides learning to become a ruler in the shadow of his great father. The tale of Baron Vladimir Harkonnen, ruthless tyrant who becomes a pawn of Bene Gesserit breeding schemes. The tale of Pardot Kynes, ambitious planetologist dispatched to the sands of Arrakis to understand the origins of the spice melange, the most valuable substance in the known universe. And the tale of Crown Prince Shaddam Corrino, whose lust for power leads him to plot the assassination of his own father and to create a plan that will replace the spice and disrupt the Imperium forever . . .

Dune: House Atreides begins the epic worldwide bestselling trilogy that tells of the generation before Dune and sows the seeds of great heroes, vile enemies, and terrible tyrants.

An excerpt from Dune: House Atreides

Lean and muscular, Baron Vladimir Harkonnen hunched forward next to the ornithopter pilot. He peered with spider-black eyes through the pitted windowplaz, smelling the ever-present grit and sand.

As the armored 'thopter flew high overhead, the white sun of Arrakis dazzled against unrelenting sands. The sweeping vista of dunes sizzling in the day's heat made his retinas burn. The landscape and sky were bleached of color. Nothing soothed the human eye.

The Baron wished he could be back in the industrialized warmth and civilized complexity of Giedi Prime, the central world of House Harkonnen. Even stuck here, he had better things to do back at the local family headquarters in the city of Carthag, other diversions to suit his demanding tastes.

But the spice harvesting must take precedence. Always. Especially a huge strike such as the one his spotters had reported.

In the cramped cockpit, the Baron lounged with well-postured confidence, ignoring the buffet and sway of air currents. The 'thopter's mechanical wings beat rhythmically like a wasp's. The dark leather of his chestpiece fit tightly over well-toned pectorals. In his mid-forties, he had rakish good looks; his reddish gold hair had been cut and styled to exacting specifications, enhancing his distinctive widow's peak. The Baron's skin was smooth, his cheekbones high and well sculpted. Sinewy muscles stood out along his neck and jaw, ready to contort his face into a scowl or a hard smile, depending on circumstances.

"How much farther?" He looked sideways at the pilot, who had been showing signs of nervousness.

"The site is in the deep desert, m'Lord Baron. All indications are that this is one of the richest concentrations of spice ever excavated."

The flying craft shuddered on thermals as they passed over an outcropping of black lava rock. The pilot swallowed hard, focusing on the ornithopter's controls.

The Baron relaxed into his seat and quelled his impatience. He was glad the new hoard was far from prying eyes, away from Imperial or CHOAM corporate officials who might keep troublesome records. Doddering old Emperor Elrood IX didn't need to know every damned thing about Harkonnen spice production on Arrakis. Through carefully edited reports and doctored accounting journals, not to mention bribes, the Baron told the off-planet overseers only what he wanted them to know.

He swiped a strong hand across the sheen of sweat on his upper lip, then adjusted the 'thopter's environment controls to make the cockpit cooler, the air more moist.

The pilot, uncomfortable at having such an important and volatile passenger in his care, nudged the engines to increase speed. He checked the console's map projection again, studied outlines of the desert terrain that spread as far as they could see.

Having examined the cartographic projections himself, the Baron had been displeased by their lack of detail. How could anyone expect to find his way across this desert scab of a world? How could a planet so vital to the economic stability of the Imperium remain basically uncharted? Yet another failing of his weak younger demibrother, Abulurd.

But Abulurd was gone, and the Baron was in charge. Now that Arrakis is mine, I'll put everything in order. Upon returning to Carthag, he would set people to work drawing up new surveys and maps, if the damned Fremen didn't kill the explorers again or ruin the cartography points.

For forty years, this desert world had been the quasi-fief of House Harkonnen, a political appointment granted by the Emperor, with the blessing of the commercial powerhouse CHOAM—the Combine Honnete Ober Advancer Mercantiles. Though grim and unpleasant, Arrakis was one of the most important jewels in the Imperial crown because of the precious substance it provided.

However, upon the death of the Baron's father, Dmitri Harkonnen, the old Emperor had, through some mental deficiency, granted the seat of power to the softhearted Abulurd, who had managed to decimate spice production in a mere seven years. Profits plunged, and he lost control to smugglers and sabotage. In disgrace, the fool had been yanked from his position and sent off without official title to Lankiveil, where even he could do little damage to the self-sustaining whale-fur activities there.

Immediately upon being granted the governorship, Baron Vladimir Harkonnen had set out to turn Arrakis around. He would make his own mark, erase the legacy of mistakes and bad judgment.

In all the Imperium, Arrakis—a hellhole that some might consider a punishment rather than a reward—was the only known source of the spice melange, a substance worth far more than any precious metal. Here on this parched world, it was worth even more than its weight in water.

Without spice, efficient space travel would be impossible . . . and without space travel, the Imperium itself would fall. Spice prolonged life, protected health, and added a vigor to existence. The Baron, a moderate user himself, greatly appreciated the way it made him feel. Of course, the spice melange was also ferociously addictive, which kept the price high . . .

The armored 'thopter flew over a seared mountain range that looked like a broken jawbone filled with rotted teeth. Up ahead the Baron could see a dust cloud extending like an anvil into the sky.

"Those are the harvesting operations, m'Lord Baron."

Hawklike attack 'thopters grew from black dots in the monochrome sky and swooped toward them. The communicator pinged, and the pilot sent back an identification signal. The paid defenders—mercenaries with orders to keep out unwelcome observers—circled away and took up protective positions in the sky.

So long as House Harkonnen maintained the illusion of progress and profits, the Spacing Guild didn't need to know about every particular spice find. Nor did the Emperor, nor CHOAM. The Baron would keep the melange for himself and add it to his huge stockpiles.

After Abulurd's years of bumbling, if the Baron accomplished even half of what he was capable of, CHOAM and the Imperium would see a vast improvement. If he kept them happy, they wouldn't notice his substantial skim, would never suspect his secret spice stashes. A dangerous stratagem if discovered . . . but the Baron had ways of dealing with prying eyes.

As they approached the plume of dust, he took out a pair of binoculars and focused the oil lenses. The magnification permitted him to see the spice factory at work. With its giant treads and enormous cargo capacity, the mechanical monstrosity was incredibly expensive—and worth every solari expended to maintain it. Its excavators kicked up cinnamon-red dust, gray sand, and flint chips as they dug down, scooping up the surface of the desert, sifting for aromatic spice.

Mobile ground units ranged across the open sand in the vicinity of the factory, dipping probes beneath the surface, scraping samples, mapping the extent of the buried spice vein. Overhead, heavier machinery borne by jumbo ornithopters circled, waiting. Peripherally, spotter craft cruised up and down the sands with alert watchers searching for the telltale ripples of wormsign. One of the great sandworms of Arrakis could swallow their entire operation whole.

"M'Lord Baron," the pilot said and handed the communicator wand over to him, "the captain of the work crew wishes to speak with you."

"This is your Baron." He touched his ear to listen to the pickup. "Give me an update. How much have you found?"

Below on the sands, the crew captain answered, his voice gruff, his manner annoyingly unimpressed with the importance of the man to whom he was speaking. "Ten years working spice crews, and this deposit's beyond anything I've ever seen. Trouble is, it's buried deep. Normally, you know, we find the spice exposed by the elements. This time it's densely concentrated, but . . . "

The Baron waited for only a moment. "Yes, what is it?"

"Something strange going on here, sir. Chemically, I mean. We've got carbon dioxide leaking from below, some sort of a bubble beneath us. The harvester's digging through outer layers of sand to get at the spice, but there's also water vapor."

"Water vapor!" Such a thing was unheard-of on Arrakis, where the moisture content of the air was nearly unmeasurable, even on the best of days.

"Could have stumbled on an ancient aquifer, sir. Maybe buried under a cap of rock."

The Baron had never imagined finding running water beneath the surface of Arrakis. Quickly he considered the possibilities of exploiting a free-flowing water resource by selling it to the populace. That was sure to upset the existing water merchants, who had grown too swollen with self-importance anyway.

His basso voice rumbled. "Do you think it's contaminating the spice somehow?"

"Not able to say, sir," said the crew captain. "Spice is strange stuff, but I've never seen a pocket like this before. It doesn't seem . . . right somehow."

The Baron looked over at the 'thopter pilot. "Contact the spotters. See if they've picked up any wormsign yet."

"No wormsign, m'Lord," the pilot said, scanning the reply. The Baron noticed sparkles of sweat on the man's forehead.

Kevin J. Anderson is the author of the Star Wars: Jedi Academy trilogy, the Star Wars novel, Darksaber, and the comic series The Sith War for Dark Horse comics and the science fiction novel Blindfold. He has edited several Star Wars anthologies, including Tales From The Mos Eisley Cantina. He is a New York Times bestselling author and lives in California with his wife, Rebecca Moesta. 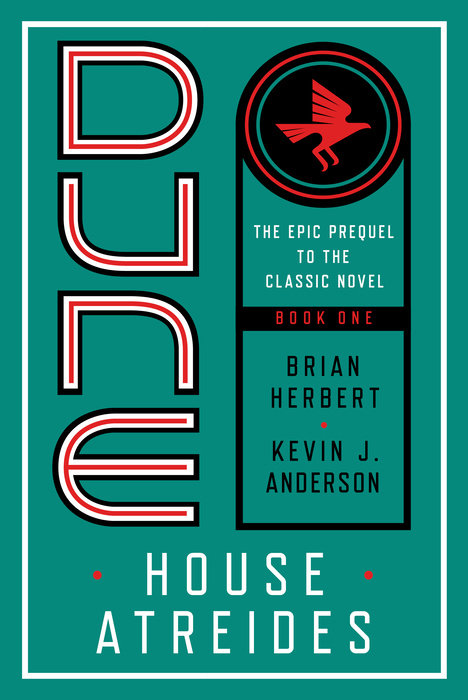