“A thrilling read . . . I could not have loved it more.”—LISA JEWELL
“Emma Makepeace is a worthy heir to the James Bond mantle.”—JAMES PATTERSON

In this “high-octane spy thriller in the Ian Fleming mold” (CrimeReads), a British spy has twelve hours to deliver her asset across London after Russia hacks the city’s security cameras. Can she make it without being spotted . . . or killed?

ONE OF THE BEST BOOKS OF THE YEAR: PopSugar, CrimeReads, Library Journal

Nothing about Emma Makepeace is real. Not even her name.

A newly minted secret agent, Emma's barely graduated from basic training when she gets the call for her first major assignment. Eager to serve her country and prove her worth, she dives in headfirst.

Emma must covertly travel across one of the world’s most watched cities to bring the reluctant—and handsome—son of Russian dissidents into protective custody, so long as the assassins from the Motherland don’t find him first. With London’s famous Ring of Steel hacked by the Russian government, the two must cross the city without being seen by the hundreds of thousands of CCTV cameras that document every inch of the city’s streets, alleys, and gutters.

Buses, subways, cars, and trains are out of the question. Traveling on foot, and operating without phones or bank cards that could reveal their location or identity, they have twelve hours to make it to safety. This will take all of Emma’s skills of disguise and subterfuge. But when Emma’s handler goes dark, there’s no one left to trust. And just one wrong move will get them both killed.

An excerpt from Alias Emma

The sun was setting over one of the most expensive streets in the world when the assassins arrived.

The CCTV camera on the central London corner recorded long blades of golden light stretched out across limestone walls as two men walked down the exclusive avenue. As if invisible, they passed unnoticed by a nanny pushing a buggy, and a trio of well-exercised women, thin as wraiths, chattering as they ambled to the gym.

It was a bright autumn day, but the men kept their heads tilted down so no camera recorded their features as they slipped out of the shadows and approached a six-story building where the last apartment sold went for £14 million. The camera above the door captured one of them standing guard, his face turned away, while the other bent over the handle. After a few seconds, the door opened.

In another city there might have been a doorman, or a security guard, but residents in this neighborhood never liked to be observed going about their business. The most prized buildings had long been the kind where you can walk from the front door to your flat without seeing a soul. This was one of those. Bypassing the art deco cage elevator, with its modern security camera, the men climbed the red-carpeted stairs without being challenged.

All the way to the top floor.

Outside, Knightsbridge went about its elegant business. A scarlet Lamborghini rumbled by with a panther’s purr, pausing at a red light. A delivery truck idled behind it, the driver leaning his elbow against the open window, ogling the car’s voluptuous lines. The three women reached the corner and waited for the signal to cross. The noise of the traffic passing on the cross street must have hidden the sounds of struggle from the building behind them because no one looked up as a body plummeted from the window of the top-floor apartment. It fell from the sky with strange grace, a white dressing gown fluttering in the air like wings, before it slammed into the top of the idling van, striking it with such force the vehicle rocked on its wheels. The air was split by an agonized screech of bending metal and crushed bone.

Later, none of the women could remember how they reacted, but footage from a CCTV camera showed them crying out, reaching instinctively for each other’s hands as they scrambled away from the carnage.

In the ensuing chaos—cars stopping, the truck driver and the Lamborghini owner emerging bewildered from their vehicles, talking and gesticulating, the women sobbing and pointing, the nanny pausing to look back—no one noticed two men step out of the pale-stone building and close the door behind them before walking swiftly in the opposite direction, heads tilted slightly down.

The job was done.

The T-shirt shop smelled overpoweringly of patchouli oil. Perched on a stool near the cash register, Emma wondered if she’d ever get the musky, sweet scent of it out of her clothes.

“Put these in that corner.” Raven held out an armful of hand-made signs and tilted his head toward the back of the shop, beyond the stacks of T-shirts with peaceful slogans, beaded necklaces, and carved wooden symbols.

“Sure thing.” Emma jumped to her feet and bounded over. There were about fifteen signs, the paint barely dry. They swung as she walked to the back of the small shop, sending random words flashing in vivid red, green, and blue: emergency, danger, strike.

It was after closing time but Raven had asked her to stay late and help him get ready for the protest march planned for the weekend. A shaggy-haired political zealot, Raven managed this north London shop and spent the rest of his time organizing a left-wing protest group. He was thirty-three years old but looked younger because of the hair and the tattoos. His birth name was David Lees but he’d changed it legally eight years ago to the more memorable “Raven Hawkhurst.” In action on the streets he was the protest equivalent of a lightweight boxer, small and relentless, jabbing black-and-red anarchy flags at riot police, his thin face disguised behind a checkered scarf. In person, he was resentful and paranoid—convinced the government was after him.

Which, to be fair, they were.

It had taken weeks working undercover for Emma to make her way into his inner circle, and even longer to get close enough to earn his trust. Almost as soon as she’d done it, though, she’d decided he wasn’t ever going to pose any real danger. He wasn’t smart enough or organized enough to bring about the revolution of his dreams. He liked the drama and distraction of a punch-up with the cops, but he was no terrorist.

She’d told her bosses as much more than once but they’d overruled her, insisting she stay and dig deeper. The group’s online fundraising received a surprising amount of money funneled through a number of sources, but originating in Russia. And so here she was, stacking protest signs in a fug of patchouli.

Setting the signs down, she turned back. “It sounds like the march’ll be massive on Saturday.” In character, she gave her voice a flat-edged northern accent. Raven believed she was an activist from Manchester.

He barked a bitter laugh. “You know how many people live in this city?” He didn’t wait for her to answer. “Fourteen million. You get ten thousand at a protest? That’s not success. That’s abject failure.” Grabbing the remaining signs, he lugged them to the back without waiting for her to help. “People want to drive their SUVs to their kids’ private schools and think they’ll save the environment by not using plastic straws.”

He was always morose the day before a march. Emma left him to rant and headed back to finish her work with the cans of paint as he warmed to his topic. He’d got as far as “They’ll care when we take their mansions away” when her phone vibrated.

She pulled it from her pocket and glanced at the screen. It held only one word: “Home.”

“Raven,” she said, raising her voice to break through his familiar liturgy. “I’ve got to take this call. Be right back.”

There was an indignant pause, and then she heard him mutter, “Oh, typical.”

She hurried out onto the pavement, hitting answer as soon as the door closed. “This is Makepeace 1075.”

An unfamiliar female voice said, “Hello, Emma. I’ve got a message from home. Are you safe to take it now?”

Emma looked up and down the quiet street—there was no one nearby. “Now is fine.”

“The message follows: ‘Your mother is ill. She needs you urgently.’ Do you need me to repeat?”

Emma’s heart began to race, but she kept her voice cool. “Got it. Thanks.”

When she ran back into the shop, Raven was at the front, gathering the last of the paint.

“I’m really sorry, I have to go home. There’s an emergency.” Emma raced behind the cash register to grab her bag.

Exuding silent condemnation, he fixed her with a beady look.

“That was my mum,” she explained, giving her voice a worried tone. “She’s ill, and there’s nobody else to look after her. I’ve got to go.”

“Oh, fine.” He gestured at the shop with an arm that had the words “NO JUSTICE” tattooed from wrist to elbow. “And I’ll just do all this myself, I guess?”

Deliberately misunderstanding him, she cast him a grateful smile. “That’d be fab. You’re a star. See you later.”

She hurried through the door, his words floating after her: “It was sarcasm.”

By then, though, she was already running toward Camden High Street, her biker boots clunking hard on the pavement.

She couldn’t care less about Raven right now. She was being called in.

It took her just over thirty minutes to get to Westminster at full steam. There was no time to change out of her Climate Panic T-shirt, or to remove the torn jeans or blue hair extensions. Her appearance raised a few eyebrows on tweedy Rochester Row as she raced from the tube station, crossing against the traffic lights, but she was in too much of a hurry to care.

On a quiet street built along a scimitar curve, she stopped in front of a narrow brick building. Nothing about it stood out. It looked exactly like the other neat, four-story offices. Above the nondescript entrance, a plain blue-and-white sign read The Vernon Institute.

Emma let herself in and hurried across the empty Georgian front hall to where a set of opaque black glass doors blocked access to the rest of the building. Unlike the front entrance, these doors were modern and bulletproof. A gleaming device was mounted on the wall to one side. Leaning forward, she stared at her own iris reflected in dark glass, as three lights blinked. The first was red, the second amber, the third green. When the third light appeared, the lock released with an audible click. She pushed the door open. On the other side was a busy office building.

A woman at the front desk glanced up from her work and said, “He’s upstairs.”

When Emma reached the first floor, she found Ripley on the landing, hands in the pockets of his suit trousers, his long, complicated face impassive.

“Got here as fast as I could,” Emma told him breathlessly. “What’s wrong?”

Ava Glass is a pseudonym for a former crime reporter and civil servant. Her time working for the government introduced her to the world of spies, and she's been fascinated by them ever since. She lives and writes in the south of England. 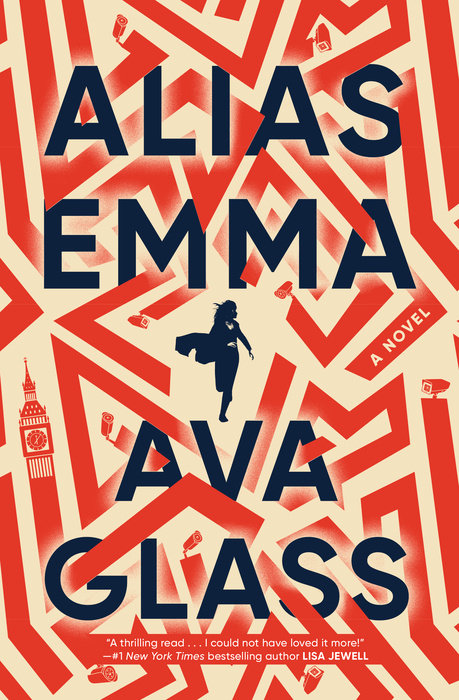