A Memoir in Pieces

An enlightening and deliciously witty collection of essays on Blackness, faith, pop culture, and the challenges—and rewards—of finding one’s way in the world, from a BuzzFeed editor and podcast host.

“A memoir that is immense in its desire to give . . . a rich offering of image, of music, of place.”—Hanif Abdurraqib, author of A Little Devil in America: Notes in Praise of Black Performance

ONE OF THE MOST ANTICIPATED BOOKS OF 2022—The Millions

At twelve years old, Elamin Abdelmahmoud emigrates with his family from his native Sudan to Kingston, Ontario, arguably one of the most homogenous cities in North America. At the airport, he’s handed his Blackness like a passport, and realizes that he needs to learn what this identity means in a new country.

Like all teens, Abdelmahmoud spent his adolescence trying to figure out who he was, but he had to do it while learning to balance a new racial identity and all the false assumptions that came with it. Abdelmahmoud learned to fit in, and eventually became “every liberal white dad’s favorite person in the room.” But after many years spent trying on different personalities, he now must face the parts of himself he’s kept suppressed all this time. He asks, “What happens when those identities stage a jailbreak?”

In his debut collection of essays, Abdelmahmoud gives full voice to each and every one of these conflicting selves. Whether reflecting on how The O.C. taught him about falling in love, why watching wrestling allowed him to reinvent himself, or what it was like being a Muslim teen in the aftermath of 9/11, Abdelmahmoud explores how our experiences and our environments help us in the continuing task of defining who we truly are.

With the perfect balance of relatable humor and intellectual ferocity, Son of Elsewhere confronts what we know about ourselves, and most important, what we’re still learning.

An excerpt from Son of Elsewhere

It took two stopovers and nineteen hours of total flying time for me to become Black.

I left Khartoum as a popular and charming (and modest) preteen, and I landed in Canada with two new identities: immigrant, and Black.

When the friendly customs agent stamped my passport and said, “Welcome to Canada,” he left out the “also, you’re Black now, figure it out” part. In retrospect, it would’ve been immensely helpful. Having lived twelve years as a not Black person—which is to say, a person entirely unconcerned with his skin colour—you can imagine it was a jarring transition to make.

Without an instruction manual, I was left to my own devices to figure this whole race thing out. And luckily, I had one thing going for me: the place I had just moved to was one of the whitest cities in Canada. This was going to be great.

Let me tell you some of the boring shit that made my eyes glaze over in history class when I was in Sudan. In the early nineteenth century, Muhammad Ali Pasha, an Albanian Ottoman military commander, was sent by the mighty empire to wrestle Egypt from the grip of French occupation under Napoleon. When Muhammad Ali succeeded, he was made Wali, or viceroy, of the Ottoman empire’s newly acquired plaything.

Not satisfied with Egypt’s resources and gold, the Wali commanded his son to lead troops into Nubia. As it turned out, plundering is mighty easy when you have an advanced army, so the joyride continued. The Ottoman troops rolled on south and seized the province of Kordofan. Where shall we go from here? they wondered. Eh, how about east? Why not! East it was, to take the Sultanate of Sennar, which surrendered without a fight.

Conflict forges identity, though, and the Ottoman audacity managed to unite disparate tribes that had little reason to unite before. Their union was the birth of modern Sudan, though it took its time gestating: in 1881, sixty years after the Ottoman troops invaded, the Mahdist Revolution exploded in Kordofan.

The revolt was named after the Mahdi, an inspiring religious leader who became its rallying point. An army of farmers and merchants and tribesmen, now under a relatively coherent collective identity, said, You know what, enough of this. And Kordofan inspired the other regions to join in the fight.

These regular people, armed with swords and spears and sticks, began a revolution against the occupiers. It concluded in 1883 with victory for the Mahdists, and Sudan became the first (and only) colonized African nation to expel a colonial army by force.

One tiny hiccup: by the time the Mahdists won, Egypt was a de facto protectorate of the British empire. Which meant Sudan had just de facto handed an asskicking to the mightiest army in the world. And empires de facto don’t like that very much.

The British took a deep breath, gathered their wits, and in 1899 retook Sudan and demolished the Mahdist state. Then they established a new framework, whereby Britain and Egypt would rule Sudan together.

The population of Kingston, Ontario, is estimated to be about 85 per cent white, which is another way of saying it’s like holy shit white. Kingston is so white, way too many people say things like “my Black friend.” Kingston is so white (how! white! is it!), it has a town crier who is not only one of its most recognizable faces, he also won a title at the world championship of town criers. Lots of Kingstonians know this fact. They will tell it to you at parties.

All of this is to say: Kingston is not the easiest place to settle as a new immigrant. It’s not exactly a gentle introduction to a new land. It’s for good reason that most new immigrants to Canada find themselves in a major metropolis—a Toronto or a Montreal or a Vancouver or (if you must) an Edmonton. The idea is, when you have more people who look like you, it’s easier to recognize how a place can become home. By contrast, in Kingston the whiteness was overwhelming.

When we arrived in Kingston, Baba made a point of introducing us to the other Sudanese families. All in all, there were eleven families, a small constellation of people who looked like me and could speak like me and were, too, constantly aware that we were far from what we considered home.

I related to the parents better: their Arabic was still instinctive. I could talk to Sudanese parents in Kingston like we were running into each other in Khartoum. They had a muscle memory for the belly laughs and the keifaks and the way Sudanese greetings go on and on and on.

The Sudanese kids, welcoming as they were, tried their best to swish the Arabic words in their mouths. Their parents had told them to take it easy on me, so they collectively pooled all the words they knew and brought them to me as an offering. But I could tell that even though their parents had spoken Arabic to them their whole lives, and their homes were decorated with heirlooms of Sudan, they wore their Sudanese identity like a sweater that didn’t quite fit. They identified with something else.

That something else, as it turned out, was Blackness. I found this out when I visited a cousin living in Toronto. She was effortlessly cool, and had arrived in Canada four years before I did. “I don’t know why your Baba chose Kingston for your family,” she said. “Over here, we’re Black. And being Black in Canada is way harder in a place like your city. You’ll see.”

The words over here, we’re Black rang around my head. Before I could ask the million questions that swirled in my brain (Wait, what do you mean we’re Black? Does it come with rights and responsibilities? Do I get a card?), she handed me two cds: The Miseducation of Lauryn Hill and Illmatic. “You won’t be around a lot of Black people,” she told me. “But hip hop can help you connect to them.

“And if you want people to think you’re cool, get a hat with a Chinese word on it. Also, your pants are too tight.” The turning point of the war between Mahdist Sudan and the British troops was the Battle of Atbara in April 1898, when Herbert Kitchener’s army defeated 15,000 Sudanese soldiers. The vanquished unit’s commander, Emir Mahmud Ahmad, was captured and taken to Kitchener in shackles.

The scene was painted by Godfrey Douglas Giles, who often captured military scenes for the British Army. In the foreground, one of the conquered dervishes lies dead. Far in the distance, smoke fills the horizon. A stoic Ahmad is depicted holding his head high as Kitchener scolds him.

Five months after Atbara, the Battle of Omdurman effectively put an end to the war and declared victory for the British. Kitchener lost less than 500 men in that battle, but killed 11,000.

Satisfied that Sudan was under his control, Kitchener ordered the Mahdi’s tomb blown up—so as to prevent it from becoming a gathering place for a future revolution— and the Mahdi’s bones were scattered. When word of the tomb desecration reached Queen Victoria, she wept.

It was this battle that gave Kitchener his reputation of brutality—Winston Churchill was disturbed by the killing of the wounded in Omdurman. “I am not squeamish,” Churchill wrote to his cousin, the Duke of Marlborough, “but I have seen acts of great barbarity perpetrated at Omdurman and have been thoroughly sickened of human blood.”

In 1936, the British withdrew from Egypt but kept their forces in Sudan. For more than a decade after, Egyptian governments demanded that Britain accept King Farouk as king of Egypt and Sudan, but the British refused.

It took until Egypt abolished its monarchy in 1953 for Egyptian leaders to drop their claim of sovereignty over Sudan, leaving little justification for the British to hold on to it. Gamal Abdel Nasser, the heralded Egyptian hero, was said to have thought that Sudan was too poor and would be a headache for Egypt to govern. In 1956, Sudan finally became an independent state.

In other words, it wasn’t until Sudan became a needy hassle, an albatross around the necks of its occupiers, that the country became free.

A hat with Chinese lettering wasn’t hard to find in the year 2000. It was a mainstay of the early-aughts hip hop scene, a period of time famous for a) utter corniness and b) the start of hip hop’s ascendance from subculture to the dominant mode of pop music.

So, I got the f***ing hat. I got it from the S&R Department Store, an iconic and now closed shop where you could find, basically, anything—as long as you didn’t mind navigating the inexplicably dark corners and the vague asbestos vibes. Whatever you wanted, S&R had it. I am certain they had lights, too, but somehow every spot you browsed was shrouded in shadow, which made shopping there feel like a treasure hunt.

I picked out a black hat with Chinese lettering made of metal. This hat was to be my armour: I can’t speak English yet, but yeah, I’m cool. The rest of the prescription was harder to swallow, however.

ELAMIN ABDELMAHMOUD is a culture writer for BuzzFeed News and host of CBC’s pop culture show Pop Chat. He was a founding co-host of the CBC Politics podcast Party Lines, and he is a contributor to The National’s At Issue panel. His work has appeared in Rolling Stone, the Globe and Mail, and others. When he gets a chance, he writes bad tweets.

A Memoir in Pieces 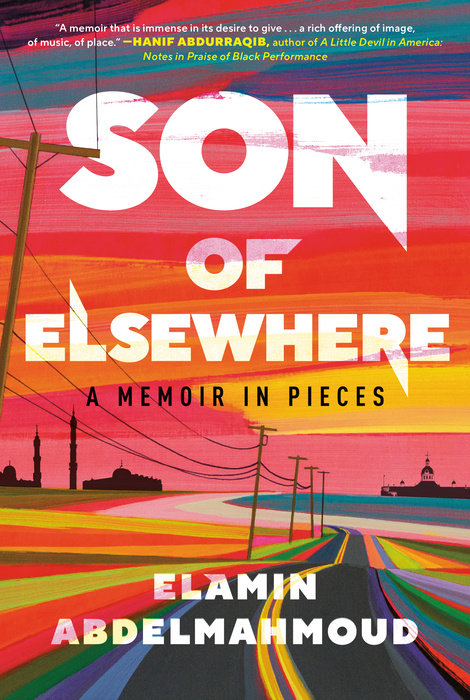