A charming bakery cookbook with 85 southern baking recipes for favorites like cookies, cakes, pies, and more to make every day delicious—from breakfast to dessert.

Nestled on Main Street among the apple orchards and rolling hills of rural Virginia, Red Truck Bakery is beloved for its small town feel and standout baked goods. Red Truck Bakery Cookbook is your one-way ticket to making these crowd-pleasing confections at home. Full of fresh flavors, a sprinkle of homespun comfort, and a generous pinch of Americana, the recipes range from Southern classics like Flaky Buttermilk Biscuits and Mom’s Walnut Chews, to local favorites like the Shenandoah Apple Cake and Appalachian Pie with Ramps and Morels. Between the keepsake recipes are charming stories of the bakery’s provenance and 75 gorgeous photographs of evocative landscapes and drool-worthy delectables. These blue-ribbon desserts and anytime snacks are sure to please!

“I like pie. That’s not a state secret… I can confirm that the Red Truck Bakery makes some darn good pie.”—President Barack Obama

John Wayne made me a tuna sandwich.

I was the nineteen-year-old art director of a weekly newspaper in Corona del Mar, California, and had an appointment with the actor’s housekeeper to return a heavy carton of framed photographs we had borrowed for a feature profile. Nearly dropping the box, I kicked the door several times with my foot as a way of knocking (hey, I was a teenager). John Wayne himself was suddenly in my face, scowling. I handed him the box of pictures, apologized, and he invited me in.

“Ya wanna tuna sandwich?” he asked.

I had just eaten but I wasn’t going to pass that up. He led me through his house on Newport Bay and we ended up in the kitchen overlooking his yacht, the Wild Goose. I watched the process closely as he toasted hearty slices of wheat bread, spreading each with mayonnaise. He made the tuna salad with a good pinch of salt to boost the flavor, adding more mayo, chopped sweet pickles, and celery. He then plopped a big mound onto a pile of lettuce. Before adding the top slice of toast, he looked right at me and smashed a fistful of potato chips into the tuna filling, commanding in his drawl, “This is why you’ll like this.”

I’ve made tuna sandwiches the same way ever since. John Wayne’s lesson sticks with me forty years later: there are no rules.

My mom wasn’t an adventurous cook but, with a family of seven to feed, she and my newspaperman dad fed us in as economical a manner as possible (pancakes for dinner seemed like a genuine treat). Bargain margarine was a staple in our fridge, and it wasn’t until I was working myself that I tasted real butter for the first time. A coworker brought in homemade banana bread and I told her it was the best thing I had ever eaten. She glowed—until she realized I was referring to the pat of butter on top of my slice. My culinary appreciation was, well, lacking.

My uncle Stan took me under his wing and set me on the path of baking. He loved to tinker in his Florida kitchen and would ship his latest breads to me in California. I took that as a challenge and reciprocated, proudly sending my own baked goods across the country. A Florida-postmarked carton would arrive a couple of weeks later with his versions of my recipes. He would mark up the original I had sent with a red pen indicating corrections he thought were needed to make the items tastier.

Whenever I flew to the Sunshine State to visit my cousins, I’d saddle up next to my uncle in his Clearwater kitchen to work with him on his latest baking project. After a spirited back-andforth over the better part of a year, we nailed a multigrain wheat bread full of golden raisins, dried cranberries, and walnuts. (Spoiler alert: you can find it on page 160.)

Early on my career path, I stayed with publishing, not bread baking or tuna sandwich making, because I caught the bug from my dad, who used to let me drop by his newspaper office after school. As he said, once you get printer’s ink in your blood, it’s there forever. I moved to the nation’s capital in 1984 when legendary editor Ben Bradlee hired me as the art director of the Washington Post’s new Sunday magazine. In addition to my daily editorial routine, I worked alongside revered Post food critic Phyllis Richman and her assistant, Tom Sietsema, packaging their weekly restaurant columns and annual dining guides.

My pal (and now spouse) Dwight McNeill joined me on weekly photography visits as we scouted the restaurants they were writing about. Over time, the Post’s special dining issues became my favorite projects to design.

As Dwight and I took trips throughout the southern United States, we searched out funky cafés, barbecue joints, groceries, and bakeries. For our compass, we kept a copy of Jane and Michael Stern’s Roadfood in the glove box. I didn’t know it then, but that guidebook helped inspire me to think about ditching a life in publishing and opening a charming little food joint.

My publishing career took me from the Washington Post to art directorships at House & Garden, Preservation, Architecture, and Smithsonian magazines; later I rejoined the Washington Post, which I’d sorely missed. I wasn’t getting any younger, though, and I figured that if I were ever going to follow my passion to launch a food business, I’d better get on board soon. I burned up my vacation hours as I immersed myself in a professional baking and cooking education. I enrolled in the Culinary Institute of America (the other CIA) in New York, training in café breads and pastries, and volunteered for the three a.m. bake for the school’s restaurants. I followed Chicago restaurateur Rick Bayless to the CIA’s program in Oaxaca, Mexico, where we cooked regional cuisine in a former convent. I even spent a week taking bread classes at King Arthur Flour’s headquarters in Norwich, Vermont. I learned much more at the prestigious L’Academie de Cuisine, a baking and cooking school just outside of Washington, DC, in classes led by Mark Ramsdell, former assistant to White House pastry chef Roland Mesnier.

In 1997, Dwight and I moved from the top floor apartment of a DC row house to our own home in Arlington County, Virginia, across the Potomac. I had grown tomatoes and peppers on our urban balcony, and was excited that our new house had a yard where I could plant a proper garden. Even though we could see the Washington Monument from our neighborhood, Arlington felt less like a city and more country-like, with a local farmer’s market—and a county fair.

Just as peaches were coming into season, I decided to enter some jam into competition at the Arlington County Fair. Mary Jones, an old friend of ours, had stopped by with a tub of crystallized ginger. I chopped a handful of her ginger; added a little cinnamon, nutmeg, and sugar to the sliced peaches; ladled my boiling jam into sterilized jars; and sealed them up. The results tasted delicious to me—sweet, well-spiced and a little zingy from the ginger—but one never knows how judges will react. I dropped off my entry, crossed my fingers, and headed to the airport for a long-planned visit to California.

Dwight called me a day later with the competition results. “Sit down for this,” he said. “You got an honorable mention.”

I yawned. “Great. A ribbon for the kitchen.”

Then he added, “You also won the theme award. And, well, first place. And, by the way, you were named Grand Champion.” The judges told him it was the crystallized ginger that swayed them. I wrote a story for the Post’s food section about my big inaugural win. After the taste of victory, there was no turning back.

A few years later, we bought a weekend getaway: a small farmhouse on a few acres in the village of Orlean, the heart of Virginia’s Piedmont hunt country one hour west of DC. I planted an orchard of peach, apple, sour cherry, and persimmon trees. Always thinking like an art director, I thought we needed an old truck on the farm, and bought a bright red 1954 Ford F-100 I found online. The seller turned out to be fashion designer Tommy Hilfiger; he’d used the restored truck on his Connecticut farm and had it shipped to me in Virginia.

I began baking breads, pies, and granola on Friday nights out at the farmhouse. The next morning, I would hop into the old red truck and deliver my goods to three rural stores: the Village Green in Orlean, Epicurious Cow in Amissville, and R.H. Ballard in Little Washington. The baking was a hit. People started showing up half an hour before the stores opened, waiting for me to pull up with the truck’s bed full of still-warm goodies, inspiring me to dub my fledging business the Red Truck Bakery. I designed a crude website and offered up my moredurable baked goods for shipping anywhere in the country. How hard could it be?

Through a crazy twist of fate, New York Times food writer Marian Burros enjoyed my fruit pies, quiche, and granola at a picnic in nearby Rappahannock County. The Red Truck Bakery led the Times story of Marian’s fifteen favorite national food purveyors in her 2007 Christmas roundup. My website went from twenty-four hits one day to 57,000 the next. Dwight took time off from work to help me pack up homemade baked goods, and the mailman scratched his head when he pulled into our driveway and saw the huge load that was waiting to head out with him.

It was time to open a real bakery. So in 2008, I left publishing behind and began my new life as a baker.

Brian Noyes is the founder of the Red Truck Bakery in Marshall, Virginia, and the author of the Red Truck Bakery Cookbook. Brian trained at the Culinary Institute of America (CIA) in Hyde Park, New York, at King Arthur Baking in Norwich, Vermont, and at L'Academie de Cuisine near Washington, D.C. While he was the art director at The Washington Post and Smithsonian magazines, Brian baked pies and breads on weekends in his Virginia Piedmont farmhouse and sold them out of an old red truck he bought from designer Tommy Hilfiger. The bakery now has two destination locations in historic buildings, ships thousands of baked goods nationwide, and has earned accolades from Oprah Winfrey, Barack Obama, and many national publications. Brian is an advisor to the Jacques Pépin Foundation and a member of the Southern Foodways Alliance and the James Beard Foundation. He has written for The Washington Post, Smithsonian, Preservation, Taste of the South, The Local Palate, and Garden & Gun. 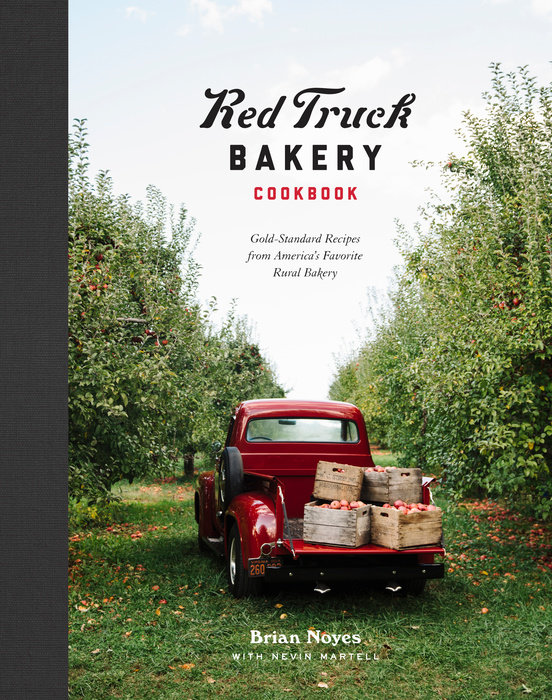