In this “urgent and enthralling reckoning with family and history” (Andrew Solomon), an American writer returns to Russia to face a past that still haunts him.

Alex Halberstadt’s quest takes him across the troubled, enigmatic land of his birth, where decades of Soviet totalitarianism shaped and fractured three generations of his family. In Ukraine, he tracks down his paternal grandfather—most likely the last living bodyguard of Joseph Stalin. He revisits Lithuania, his Jewish mother’s home, to examine the legacy of the Holocaust and the pernicious anti-Semitism that remains largely unaccounted for. And he returns to his birthplace, Moscow, where his grandmother designed homespun couture for Soviet ministers’ wives, his mother consoled dissidents at a psychiatric hospital, and his father made a dangerous living by selling black-market American records. Halberstadt also explores his own story: that of an immigrant growing up in New York, another in a line of sons separated from their fathers by the tides of politics and history.

Young Heroes of the Soviet Union is a moving investigation into the fragile boundary between history and biography. As Halberstadt revisits the sites of his family’s formative traumas, he uncovers a multigenerational transmission of fear, suffering, and rage. And he comes to realize something more: Nations, like people, possess formative traumas that penetrate into the most private recesses of their citizens’ lives.

An excerpt from Young Heroes of the Soviet Union

The plane pitched to the left and began to descend. A diorama flashed into view through a break in the cloud cover: low cabins standing in puddles of pea-­green grass, a pond and a sluiceway and some obsolete factory buildings dreaming in pastureland. Then fog rolled in from somewhere below. Sheremetyevo airport, a linoleum labyrinth lit dimly by fluorescents, was watched over by soldiers barely out of their teens who leaned languidly against the walls, assault rifles slung over their shoulders. I waited beside a church group from Michigan, half a dozen families in pristine white sneakers who joked heartily with one another, as though they were waiting out a lull at the Department of Motor Vehicles back home. Just then, their American sense of inviolability reassured me.

My case of nerves, I knew, was shared by many Soviet immigrants returning to the motherland: the worry that the gates won’t open again when it’s time to leave. The customs inspectors’ opaque, somehow familiar faces—­faces professionally immune to interpretation—­told me that liberties I hadn’t questioned the previous morning were now granted and revoked at the whim of these men, and men in other, different uniforms. In my Levi’s and windbreaker, I blended in with the church group, but I was a returning refugee, a category of traveler the customs men regarded with suspicion and possibly envy. I shifted my weight from one foot to the other and strained to pick up scraps of conversation. When my turn came, I stepped up to the window and slid my passport under the glass. The inspector, ­fiftyish with a combover, didn’t look up. When his eyes moved across the column of text that read, “Place of Birth: Russia,” the corners of his mouth widened into a foreshadowing of a grin. He stamped the passport, slid it back and, looking up at last, said, “Welcome home, Mr. Halberstadt.”

Later that afternoon, my father and I sat in his kitchen, smoking. I’d quit cigarettes in college, but I pulled on one of his Winstons, watching the smoke drift to the ceiling, where it was forming a storm cloud. My father had been smoking since he was sixteen. He was remarried and had a college-­age daughter and had never recovered completely from the heart attack he’d suffered nearly fifteen years earlier. “Why don’t you quit smoking?” I prodded. He said he would quit “when things get easier” and that he was “crazy about cigarettes.” We both knew things wouldn’t get easier and that he wasn’t going to get any less crazy, so I lit up in guilty solidarity.

My father liked a brand of vodka called Peter the Great, and on that first day in Moscow I drank enough to begin liking it, too. My father and I hadn’t seen each other in seven years. I wondered if I’d recognize him, thinking of the way some men in their late fifties begin to look elderly almost overnight. But my father looked as I remembered him, still handsome and confoundingly fit, only his temples were grayer and the lines around the eyes more pronounced.

We spent nearly the entire day talking in the kitchen, but to me our voices sounded tentative and oddly formal. Since I’d left Russia, we’d spoken occasionally over a sputtering long-­distance phone line and met a handful of times, adding up to maybe three or four weeks spent together over two and a half decades. Unlike that of most fathers and sons, our relationship hadn’t been worn into a recognizable shape by familiarity. We were closely related strangers.

To my frustration, I once again became quiet and strangely passive around my father—­a condition exacerbated by my shortage of Russian words to describe adult emotions. Well, not a shortage of words, exactly. What I lacked was the ability to put them together in ways that enabled adult modes of conversation: irony, doubt, tenderness, reserve. And so in my father’s presence I spoke less than I did otherwise and was cowed by my silence, which in turn made me feel not only mute but dumb.

He asked, as he always did, whether I’d seen any movies lately. My father liked old films enough to make them his livelihood: he dubbed classic Hollywood and European films into Russian and sold the not entirely legal VHS tapes and DVDs at a storefront in one of the newish strip malls that ringed Moscow. Sometimes he was paid—­by scrap-metal magnates and natural-­gas-­company ­lawyers—­to assemble private video collections in loose-­leaf binders with titles like “The New Wave” and “Early Hitchcock.” He had been an academic of sorts once but was a business owner now in the fledgling post-­perestroika middle class. We shared the fondness for old movies, particularly American ones, and after a few glasses of vodka he began to recite lines of film dialogue in hilariously accented English: “Whoa, take her easy there, Pilgrim.” He told me about The Band Wagon, an MGM musical from 1953. It had a dance scene he liked, filmed on a set that looked like Central Park. Halfway through, my father said, you can tell that Cyd Charisse and Fred Astaire have fallen in love, and just then his eyes looked excitable and impossibly young, the way they did when I was a child. I always liked how easily he laughed. When he did, our awkwardness and odd formality gave way to something like joy—­both unfamiliar and childishly primal—­and I could tell he felt it too. But after a moment or two, a self-­consciousness intruded and the elation was gone.

When I asked about Vassily, my father became evasive and glum, and I said nothing more until I remembered that I came to Moscow to find out about the two of them. “There isn’t much to tell,” he said, looking away. “It’s all pretty boring.” In spite of my discomfort with Russian, I knew that I had him pinned, there behind the chipboard table in his kitchen. He responded to my questions with gestures of bodily discomfort. His eyes beseeched me to change the subject, but this was important, I told him, I needed to know. He winced and lit another cigarette, chain-­smoking irritably in silence. When he spoke finally, it felt like the giving of a heavy door.

My father’s first memory of his father was watching him count money. They lived in a communal prerevolutionary apartment near the Hotel Metropol, a few steps from Red Square, alongside families of other state security officers. Vassily coaxed the bills into neat stacks and laid them gingerly into a shoe box that he kept on a high closet shelf, along with his pistol. He never quite figured out how to spend his extravagant major’s salary and lavished much of the money on clothes, for which he had a keen eye, ordering dozens of monogrammed shirts and gabardine suits from the Kremlin tailors. My grandmother Tamara designed women’s clothes for an atelier that furnished the city’s dress shops. When the two of them went out, they looked like one of the smart modern couples from the pages of Harper’s Bazaar, a magazine Tamara pried away from a colleague of Vassily’s who lived upstairs and whose job it was to monitor foreign mail. It was 1949 and my father was three or four years old.

It occurred to me that my father’s was a decidedly uncommon set of memories for someone growing up in Moscow in the late 1940s. Ninety percent of Moscow’s apartments had no heat, and nearly half had no plumbing or running water; in winter, people going out for water carried axes along with their buckets, to hack through the ice that grew around the public water pumps; workers stacked firewood brought from the countryside on street corners in piles that sometimes grew taller than a building; siblings went to school on alternate days because they shared a single pair of shoes.

But the Kremlin elite never prided itself on being egalitarian. The war was over. Vassily and Tamara went dancing, vacationed on the Black Sea. At home, my father remembered, she covered every surface with red and white carnations in cut-­crystal vases, floral bouffants that gave the room the look of a funeral parlor. They dined on caviar and smoked sturgeon sent over as part of Vassily’s rations. On New Year’s Eve—­the secular Soviet Christmas—Tamara put out porcelain bowls filled with pomegranates and oranges and decorated the tree with tinsel and crystal bells, arranging presents and sometimes a pineapple under the bottom branches. My father tore the wrapping open after supper on the thirty-­first, and after he was put to bed, the neighbors gathered around the radio console in the hallway and waited for midnight, toasting the New Year with a sparkling wine labeled Soviet Champagne. Moscow was rising from the wartime mire.

Alex Halberstadt is the author of the award-winning Lonely Avenue: The Unlikely Life and Times of Doc Pomus. His writing has appeared in The New Yorker, The New York Times Magazine, Travel + Leisure, GQ, Saveur, and The Paris Review. He is a two-time James Beard Award nominee and a recipient of fellowships from the MacDowell Colony and Yaddo. He was educated at Oberlin College and Columbia University, and works and lives in New York. 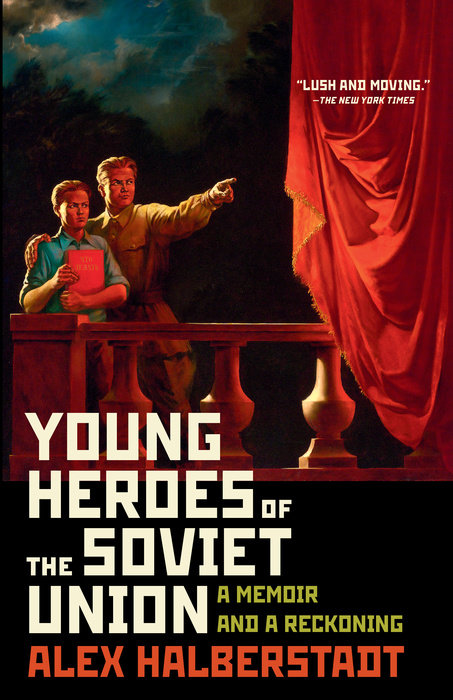