#1 NEW YORK TIMES BESTSELLER • PULITZER PRIZE FINALIST • This inspiring, exquisitely observed memoir finds hope and beauty in the face of insurmountable odds as an idealistic young neurosurgeon attempts to answer the question What makes a life worth living?

At the age of thirty-six, on the verge of completing a decade’s worth of training as a neurosurgeon, Paul Kalanithi was diagnosed with stage IV lung cancer. One day he was a doctor treating the dying, and the next he was a patient struggling to live. And just like that, the future he and his wife had imagined evaporated. When Breath Becomes Air chronicles Kalanithi’s transformation from a naïve medical student “possessed,” as he wrote, “by the question of what, given that all organisms die, makes a virtuous and meaningful life” into a neurosurgeon at Stanford working in the brain, the most critical place for human identity, and finally into a patient and new father confronting his own mortality.

What makes life worth living in the face of death? What do you do when the future, no longer a ladder toward your goals in life, flattens out into a perpetual present? What does it mean to have a child, to nurture a new life as another fades away? These are some of the questions Kalanithi wrestles with in this profoundly moving, exquisitely observed memoir.

Paul Kalanithi died in March 2015, while working on this book, yet his words live on as a guide and a gift to us all. “I began to realize that coming face to face with my own mortality, in a sense, had changed nothing and everything,” he wrote. “Seven words from Samuel Beckett began to repeat in my head: ‘I can’t go on. I’ll go on.’” When Breath Becomes Air is an unforgettable, life-affirming reflection on the challenge of facing death and on the relationship between doctor and patient, from a brilliant writer who became both.

An excerpt from When Breath Becomes Air

In Perfect Health I Begin

The hand of the Lord was upon me, and carried me out in the spirit of the Lord, and set me down in the midst of the valley which was full of bones,

And caused me to pass by them round about: and, behold, there were very many in the open valley; and, lo, they were very dry.

And he said unto me, Son of man, can these bones live?

I knew with certainty that I would never be a doctor. I stretched out in the sun, relaxing on a desert plateau just above our house. My uncle, a doctor, like so many of my relatives, had asked me earlier that day what I planned on doing for a career, now that I was heading off to college, and the question barely registered. If you had forced me to answer, I suppose I would have said a writer, but frankly, thoughts of any career at this point seemed absurd. I was leaving this small Arizona town in a few weeks, and I felt less like someone preparing to climb a career ladder than a buzzing electron about to achieve escape velocity, flinging out into a strange and sparkling universe.

I lay there in the dirt, awash in sunlight and memory, feeling the shrinking size of this town of fifteen thousand, six hundred miles from my new college dormitory at Stanford and all its promise.

I knew medicine only by its absence—­specifically, the absence of a father growing up, one who went to work before dawn and returned in the dark to a plate of reheated dinner. When I was ten, my father had moved us—­three boys, ages fourteen, ten, and eight—­from Bronxville, New York, a compact, affluent suburb just north of Manhattan, to Kingman, Arizona, in a desert valley ringed by two mountain ranges, known primarily to the outside world as a place to get gas en route to somewhere else. He was drawn by the sun, by the cost of living—­how else would he pay for his sons to attend the colleges he aspired to?—­and by the opportunity to establish a regional cardiology practice of his own. His unyielding dedication to his patients soon made him a respected member of the community. When we did see him, late at night or on weekends, he was an amalgam of sweet affections and austere diktats, hugs and kisses mixed with stony pronouncements: “It’s very easy to be number one: find the guy who is number one, and score one point higher than he does.” He had reached some compromise in his mind that fatherhood could be distilled; short, concentrated (but sincere) bursts of high intensity could equal . . . whatever it was that other fathers did. All I knew was, if that was the price of medicine, it was simply too high.

From my desert plateau, I could see our house, just beyond the city limits, at the base of the Cerbat Mountains, amid red-­rock desert speckled with mesquite, tumbleweeds, and paddle-­shaped cacti. Out here, dust devils swirled up from nothing, blurring your vision, then disappeared. Spaces stretched on, then fell away into the distance. Our two dogs, Max and Nip, never grew tired of the freedom. Every day, they’d venture forth and bring home some new desert treasure: the leg of a deer, unfinished bits of jackrabbit to eat later, the sun-­bleached skull of a horse, the jawbone of a coyote.

My friends and I loved the freedom, too, and we spent our afternoons exploring, walking, scavenging for bones and rare desert creeks. Having spent my previous years in a lightly forested suburb in the Northeast, with a tree-­lined main street and a candy store, I found the wild, windy desert alien and alluring. On my first trek alone, as a ten-­year-­old, I discovered an old irrigation grate. I pried it open with my fingers, lifted it up, and there, a few inches from my face, were three white silken webs, and in each, marching along on spindled legs, was a glistening black bulbous body, bearing in its shine the dreaded blood-­red hourglass. Near to each spider a pale, pulsating sac breathed with the imminent birth of countless more black widows. Horror let the grate crash shut. I stumbled back. The horror came in a mix of “country facts” (Nothing is more deadly than the bite of the black widow spider) and the inhuman posture and the black shine and the red hourglass. I had nightmares for years.

The desert offered a pantheon of terrors: tarantulas, wolf spiders, fiddlebacks, bark scorpions, whip scorpions, centipedes, diamondbacks, sidewinders, Mojave greens. Eventually we grew familiar, even comfortable, with these creatures. For fun, when my friends and I discovered a wolf spider’s nest, we’d drop an ant onto its outer limits and watch as its entangled escape attempts sent quivers down the silk strands, into the spider’s dark central hole, anticipating that fatal moment when the spider would burst from its hollows and seize the doomed ant in its mandibles. “Country facts” became my term for the rural cousin of the urban legend. As I first learned them, country facts granted fairy powers to desert creatures, making, say, the Gila monster no less an actual monster than the Gorgon. Only after living out in the desert for a while did we realize that some country facts, like the existence of the jackalope, had been deliberately created to confuse city folk and amuse the locals. I once spent an hour convincing a group of exchange students from Berlin that, yes, there was a particular species of coyote that lived inside cacti and could leap ten yards to attack its prey (like, well, unsuspecting Germans). Yet no one precisely knew where the truth lay amid the whirling sand; for every country fact that seemed preposterous, there was one that felt solid and true. Always check your shoes for scorpions, for example, seemed plain good sense.

When I was sixteen, I was supposed to drive my younger brother, Jeevan, to school. One morning, as usual, I was running late, and as Jeevan was standing impatiently in the foyer, yelling that he didn’t want to get detention again because of my tardiness, so could I please hurry the hell up, I raced down the stairs, threw open the front door . . . and nearly stepped on a snoozing six-­foot rattlesnake. It was another country fact that if you killed a rattlesnake on your doorstep, its mate and offspring would come and make a permanent nest there, like Grendel’s mother seeking her revenge. So Jeevan and I drew straws: the lucky one grabbed a shovel, the unlucky one a pair of thick gardening gloves and a pillowcase, and through a seriocomic dance, we managed to get the snake into the pillowcase. Then, like an Olympic hammer thrower, I hurled the whole out into the desert, with plans to retrieve the pillowcase later that afternoon, so as not to get in trouble with our mother.

Of our many childhood mysteries, chief among them was not why our father decided to bring his family to the desert town of Kingman, Arizona, which we grew to cherish, but how he ever convinced my mother to join him there. They had eloped, in love, across the world, from southern India to New York City (he a Christian, she a Hindu, their marriage was condemned on both sides, and led to years of familial rifts—­my mother’s mother never acknowledged my name, Paul, instead insisting I be called by my middle name, Sudhir) to Arizona, where my mother was forced to confront an intractable mortal fear of snakes. Even the smallest, cutest, most harmless red racer would send her screaming into the house, where she’d lock the doors and arm herself with the nearest large, sharp implement—­rake, cleaver, ax.

Paul Kalanithi was a neurosurgeon and writer. He grew up in Kingman, Arizona, and graduated from Stanford University with a BA and MA in English literature and a BA in human biology. He earned an MPhil in history and philosophy of science and medicine from the University of Cambridge and graduated cum laude from the Yale School of Medicine, where he was inducted into the Alpha Omega Alpha national medical honor society. He returned to Stanford to complete his residency training in neurological surgery and a postdoctoral fellowship in neuroscience, during which he received the American Academy of Neurological Surgery’s highest award for research. He died in March 2015. He is survived by his large, loving family, including his wife, Lucy, and their daughter, Elizabeth Acadia. 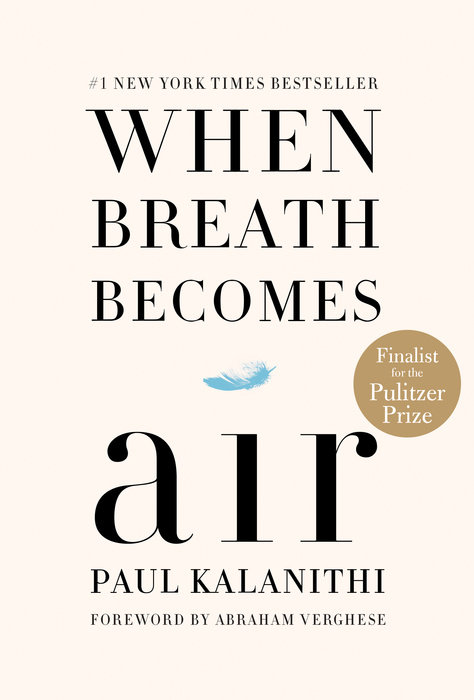