Recipes from Two Centuries of African American Cooking: A Cookbook

“A celebration of African American cuisine right now, in all of its abundance and variety.”—Tejal Rao, The New York Times

Throughout her career, Toni Tipton-Martin has shed new light on the history, breadth, and depth of African American cuisine. She’s introduced us to black cooks, some long forgotten, who established much of what’s considered to be our national cuisine. After all, if Thomas Jefferson introduced French haute cuisine to this country, who do you think actually cooked it?

In Jubilee, Tipton-Martin brings these masters into our kitchens. Through recipes and stories, we cook along with these pioneering figures, from enslaved chefs  to middle- and upper-class writers and entrepreneurs. With more than 100 recipes, from classics such as Sweet Potato Biscuits, Seafood Gumbo, Buttermilk Fried Chicken, and Pecan Pie with Bourbon to lesser-known but even more decadent dishes like Bourbon & Apple Hot Toddies, Spoon Bread, and Baked Ham Glazed with Champagne, Jubilee presents techniques, ingredients, and dishes that show the roots of African American cooking—deeply beautiful, culturally diverse, fit for celebration.

“There are precious few feelings as nice as one that comes from falling in love with a cookbook. . . . New techniques, new flavors, new narratives—everything so thrilling you want to make the recipes over and over again . . . this has been my experience with Toni Tipton-Martin’s Jubilee.”—Sam Sifton, The New York Times

“Despite their deep roots, the recipes—even the oldest ones—feel fresh and modern, a testament to the essentiality of African-American gastronomy to all of American cuisine.”—The New Yorker

“Tipton-Martin has given us the gift of a clear view of the generosity of the black hands that have flavored and shaped American cuisine for over two centuries.”—Taste

An excerpt from Jubilee

As I knelt on the cool hardwood floor in my home office, surrounded by books that span nearly two hundred years of black cooking, I realized my ancestors had left us a very special gift: a gift of freedom, culinary freedom. And like the Biblical Jubilee that marks restoration of a people through deliverance, rest, and land conservation, and like Jubilee ay celebrations marking the emancipation of enslaved Americans, our culinary Jubilee is also about liberation and resilience. Our cooking, our cooks, shall be free from caricature and stereotype. We have earned the freedom to cook with creativity and joy.

I had spent a near fortune in musty secondhand and antique bookstores, tracing the elusive history of talented, professional black cooks whose legacies have been overshadowed throughout history by the famous caricatures. You know their names—Aunt Jemima, Mammy, Uncle So-and-So—while the names of the women and men who have created so much of American cuisine have been obscured or lost. Before I knew it, I had recovered nearly 400 black cookbooks—many of them rare—dating to 1827, with themes that reflect not just Southern cooking or the soul food African Americans are known for and pigeonholed in, but immensely broad culinary interests and recipes. These books convey a wide range of technical skills and knowledge, each one written with determination and a sense of pride.

More than half of these fascinating books received new life when I wrote about them in The Jemima Code: Two Centuries of African American Cookbooks. For that annotated bibliography, I surveyed and analyzed these books, recognizing the hidden figures of their authors. These were largely self-published experts who resisted prejudice, often reclaiming classic American recipes as their own. Their writings showed me what is possible when social boundaries no longer prohibit black cooks from choosing their ingredients and tools; from traveling, cooking, eating, and celebrating their independence.

And in that moment in my office, I reflected on the wonderful foods I ate growing up in Southern California, and on the decidedly bourgeois, vegetarian, and Latin sensibilities of Mom’s cooking that permeates some of my favorite things to cook. The memories of food and family made me hungry; they also exhausted me. Let me explain.

My parents were among the professional African American migrants to leave their community in South Central Los Angeles during the early 1960s, integrating a breezy Los Angeles hillside neighborhood that had been the site of the 1932 Olympic Village. Developers promoted the area to middle-class and affluent whites as a “haven for the homeowner who wants something more than just a house, with access to the city and a haven from it.” Eventually, that sales pitch appealed to black families, too. The hamlet with panoramic views became known as the “Black Beverly Hills,” home to the black elite—doctors, lawyers, entrepreneurs, and white-collar professionals.

By the time my family found this special place, athletes like Curt Flood and entertainment industry celebrities including Nancy Wilson had settled there as well. We were “movin’ on up” just like the lyrics said in the theme song to the 1970s sitcom The Jeffersons.

Together, View Park, Baldwin, and Windsor Hills created a privileged LA oasis—similar to communities that existed nationwide, in cities like St. Louis, Mobile, Nashville, New Orleans, Cleveland, and Philadelphia. These places are rarely recognized or discussed in media, an omission of the black middle and upper classes that serves to stereotype African Americans as poor, uneducated, and possibly dangerous. This neighborhood was where we would see Berry Gordy’s family limousine roll by, or one of Ike and Tina Turner’s sons showing up on the block riding the family Great Dane, Onyx, like a pony. It was a sanctuary my friends and I took for granted during the Watts rebellion. And it was here, amid the perennial sweet scent of bright lavender jacaranda blooms on palm tree-lined streets, that my culinary sense of place was established.

My mother treated our home like an urban farm, where she nurtured our appreciation for healthy living. A duck we called Corky served as the family mascot. Fruits and vegetables filled Mom’s harvest basket—from tender lettuces, crisp cucumbers, and ruby red tomatoes to squashes and gnarly roots, plus every kind of California stone fruit, melons, a half-dozen types of citrus, apples, avocados, persimmons, blackberries, raspberries, and strawberries.

As school-age kids, we ate her fresh fruits and vegetables before heading out to trick-or-treat—a counterweight to all that sugary Halloween candy and the McDonald’s cheeseburgers handed out at Ray Charles’s home. In middle school, during long, hot summers, we balanced out junk food lunches by walking a mile to the local supermarket, pooling our allowance money, and purchasing the ingredients to make tacos with corn tortilla shells we fried ourselves.

As school-age kids, we ate her fresh fruits and vegetables before heading out to trick-or-treat—a counterweight to all that sugary Halloween candy and the McDonald’s cheeseburgers handed out at Ray Charles’s home. In middle school, during long, hot summers, we balanced out junk food lunches by walking a mile to the local supermarket, pooling our allowance money, and purchasing the ingredients to make tacos with corn tortilla shells we fried ourselves.

It is against the backdrop of a diverse culinary upbringing that I set a global table when I had a family of my own. When we sit down to eat, cast-iron abides with bone china, crystal, and damask, and iconic Southern and international dishes are served alongside one another and seem right at home. I commingle Mexican migas with flaky Southern biscuits at breakfast. Asian-style coleslaw is the side dish everyone insists I bring to the cookout. A dash of chili powder is the secret to my savory red beans, a trick I learned from my Aunt Jewel. I serve tortilla soup, crab cakes with chipotle mayonnaise, beef tenderloin with chimichurri sauce, roast turkey rubbed with chiles, Asian-spiced back ribs, and guacamole—often.

Before I wrote The Jemima Code, my family history was like a mirage. I had wonderful food memories and endowed my family with traditions centered around food, but those remembrances and practices had always made me feel isolated as a food writer. My culinary heritage—and the larger story of African American food that encompasses the middle class and the well-to-do—was lost in a world that confined the black experience to poverty, survival, and soul food.

I knew what my family and our friends and community ate, and yet, traditional written history and modern social media consistently ignored our style of cooking. Some restaurant critics mischaracterized inventive Afro-Asian fine  dining as “inauthentic.” Others panned mid- to upscale African American restaurants that didn’t serve soul food or Southern fare. Whenever I searched the Internet for mentions of food I could relate to, the few stories I encountered conflated key words such as “black California cooking,” “black middle class food,” or “African American cuisine” with the legacy of slave food. All I saw were questions like, “How do black people cook fried chicken?” or “How do you cook neck bones and cabbage?”

I wanted to scream.

For more than two hundred years, black cookbook authors have tried to tell a multifaceted story of African American food that includes, but also looks beyond, hat people call “soul food” today. I spent at least thirty of those years collecting their writings in search of nimble cooks like Freda DeKnight and the members of the Negro Culinary Arts Club of Los Angeles, who resisted tropes by publishing the recipes of middle-class black folks. I gave them back their dignity in The Jemima Code, and in turn, they set me free to tell the part of our food story that I grew up in and love.

Previously, when thinking about African American, Southern, and soul food, my angle of vision had always been through race; but discovering their lost legacy opened the view to an unexpected characteristic: class. This book broadens the African American food story. It celebrates the enslaved and the free, the working class, the middle  class, and the elite. It honors cooking with intentionality and skill, for a purpose and with pleasure. And it level sets notions of hospitality and confident cooking when resources are plentiful, as well as when they were less so. It is a culinary Jubilee!

At its core, African American cuisine reflects the blending of two distinct culinary styles. One was crafted by ingenious and industrious field hands in the slave cabin, from meager ingredients, informed by African techniques. The other signifies the lavish cooking—in the plantation kitchen or in kitchens staffed or owned by people educated formally and informally in culinary arts.

Toni Tipton-Martin is a culinary journalist and community activist and the author of the James Beard Award–winning The Jemima Code and Jubilee, named a James Beard Award winner and Book of the Year by the IACP. Toni was also recognized with the 2020 Trailblazer Award by the International Association of Culinary Professionals. Her collection of more than three hundred African American cookbooks has been exhibited at the James Beard House, and she has twice been invited to the White House to participate in First Lady Michelle Obama’s programs to raise a healthier generation of kids. She is a founding member of the Southern Foodways Alliance and Foodways Texas.

Recipes from Two Centuries of African American Cooking: A Cookbook 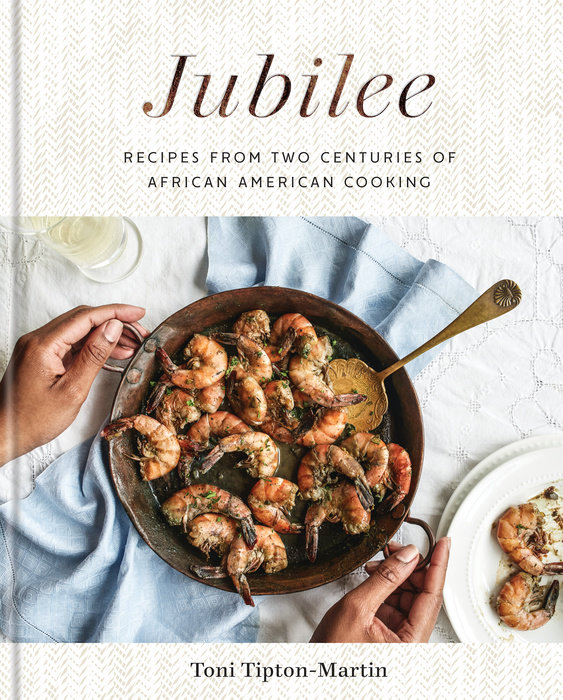