A woman must confront her sense of right and wrong when the one person she loves most is accused of an unimaginable crime. From the New York Times bestselling author of Need to Know. . . .

A strange sensation runs through me, a feeling that I don’t know this person in front of me, even though he matters more to me than anyone ever has.

Stephanie Maddox works her dream job policing power and exposing corruption within the FBI. Getting here has taken her nearly two decades of hard work, laser focus, and personal sacrifices—the most important, she fears, being a close relationship with her teenage son, Zachary. A single parent, Steph’s missed a lot of school events, birthdays, and vacations with her boy—but the truth is, she would move heaven and earth for him, including protecting him from an explosive secret in her past. It just never occurred to her that Zachary would keep secrets of his own.

One day while straightening her son’s room, Steph is shaken to discover a gun hidden in his closet. A loaded gun. Then comes a knock at her front door—a colleague on the domestic terrorism squad, who utters three devastating words: “It’s about Zachary.”

So begins a compulsively readable thriller of deception and betrayal, as Stephanie fights to clear her son’s name, only to expose a shadowy conspiracy that threatens to destroy them both—and bring a country to its knees. Packed with shocking twists and intense family drama, Keep You Close is an electrifying exploration of the shattering consequences of the love that binds—and sometimes blinds—a mother and her child.

An excerpt from Keep You Close

Nighttime’s always been my favorite time to run. I like the stillness. The quiet streets, empty sidewalks. It’s not the safest time to be out, sure. But in running gear, it’s not like I have much to steal. And as far as assault: I’m tougher than I look. Trained in defense tactics, able to hold my own. It’s the nonrandom crime that worries me more. But if someone’s coming after me, they’ll find a way to do it, regardless.

The Reflecting Pool’s off to my left, dark and glassy. Mile six of a planned ten, all under seven and a half minutes so far. A solid pace tonight, better than usual. It’s the looming storm that’s spurring me on. We’ve had a week of early spring, unseasonably warm temperatures, the kind that coax buds from bare tree branches, tulip stalks from the soil. But the weather—­it can turn on a dime here in the District, and the forecast says we’re due for one last blast of winter. Wind’s already picking up.

I pass the World War II Memorial, start up the incline to the Washington Monument. I’m in my element here. Muscles working, stretching, strengthening. Pushing myself. I’m in a light jacket, running pants that hit mid-­calf. My head’s bare, hair pulled back, tied up away from my neck. Eighties rock in my earbuds, but quietly. Soft enough that I’d hear someone approach, that I’m fully aware of my surroundings.

At the top, I catch a glimpse of the White House. Off to my left, glowing bright. Still gives me a thrill to see it, even after years in the city. A constant reminder that I’m close to the highest reaches of power. And where there’s power, there’s a need for what I do.

Past the monument now, heading down the incline, picking up speed. The Capitol dome is ahead, illuminated against the night sky.

A memory fills my mind, just for an instant. Me, in that wood-­paneled office, all those years ago. Him, standing up from behind his desk, coming toward me . . .

It’s that damned case at work that’s doing it, making me think of the past. I force my legs to work harder, push harder, move faster. Listen to the slap of my feet hitting the pavement, the staccato rhythm.

The National Mall stretches out in front of me. A straightaway, a chance to test my speed.

My legs are straining. There’s pain in my knee, but I push through. Not giving up now.

The dome looms large ahead. I see his face in my mind, once again. I can feel his hand on my arm, squeezing tight. . . .

I can’t change the past, can’t do anything about him, not without jeopardizing everything that matters. But I can do something about the future. I can stop someone else.

I glance down at my wrist. Five-­and-­a-­half-­minute mile. I can feel the smile come to my lips.

I’ve got this. Tomorrow power gets policed.

Karen Cleveland is a former CIA analyst. She has master’s degrees from Trinity College Dublin (international peace studies) and Harvard University (public policy). Cleveland lives in northern Virginia with her husband and two young sons. This is her first novel. 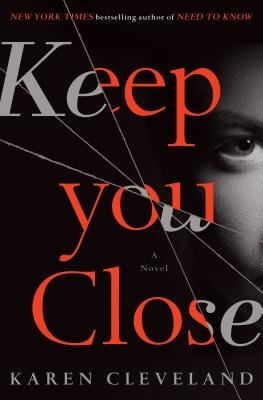