A young woman in a vaudeville sister act must learn to forge her own path after her twin runs away to Hollywood in this “elegant, immersive . . . exploration of sisterhood, identity, ambition and betrayal” (The New York Times).

Leaving was my sister’s choice. I would have to make my own.

All Harriet Szász has ever known is life onstage with her sister, Josie. As “The Sisters Sweet,” they pose as conjoined twins in a vaudeville act conceived of by their ambitious parents, who were once themselves theatrical stars. But after Josie exposes the family’s fraud and runs away to Hollywood, Harriet must learn to live out of the spotlight—and her sister’s shadow. As Josie’s star rises in California, the Szászes fall on hard times. Striving to keep her struggling family afloat, Harriet molds herself into the perfect daughter. She also tentatively forms her first relationships outside her family and begins to imagine a life for herself beyond the role of dutiful daughter that she has played for so long. Finally, Harriet must decide whether to honor her mother, her father, or the self she’s only beginning to get to know.

Full of long-simmering tensions, buried secrets, questionable saviors, and broken promises, this is a story about how much we are beholden to others and what we owe ourselves. Layered and intimate, The Sisters Sweet heralds the arrival of an accomplished new voice in fiction.

An excerpt from The Sisters Sweet

A rainy morning, late spring of 1918. Josie and I, five years old, sat together at the table in the little, muggy kitchen, pressing craters into our porridge with the backs of our spoons and watching them ooze shut again. Mama, who had warned us twice already not to play with our food, was stirring something in a pot, her hair wrapped in a red flannel cloth, a cigarette clamped between her teeth, her forehead mottled and glistening, when the door swung open and Daddy swept in, waving a pale garment high above his head. I dragged my spoon through my porridge and sighed just loudly enough for Josie to hear. Another costume.

For as long as I could remember, Daddy had been trying to convince Mama to get us into show business—the family business, he called it, when we scrambled up onto his knees and begged him for a story, and instead of a fairy tale he told us about his grandfather, the dancer, or his grandmother, who had been in a traveling show, or his parents’ puppet theater, or, best of all, the stories we wanted most but knew better than to ask for, stories that would only come when Daddy was in the mood to offer them, which depended on Mama being in the mood to give him tacit permission: stories about their glory days, when Mama was a star of the Follies, and Daddy built the sets on which she performed. (We knew Mama had had an accident, that it was the reason she used a cane, that it had ended her career and inaugurated the poverty into which we had been born, though that didn’t figure into Daddy’s lore, and I couldn’t have said how I learned any of it; the accident was a foundational fact of our lives, part of the history that belonged neither to memory nor to telling. The history that simply was.) When Daddy described relieving Mama of an unwieldy freight of roses as she came offstage, she pretended to scoff. When he told us about how she’d come on as Lady Godiva in a flesh-colored body stocking, her long yellow wig arranged to reinforce the illusion of her nudity, and three young men had actually fainted from excitement, she swatted the back of his head and said, “Oh really.” But Josie and I knew it was okay to smile. If Mama had really been angry, she would have gone silent, or retreated into one of the long baths she took to escape the rest of us. Instead, she lingered. She fussed at a potted fern. She sat and mended a blouse, only pretending not to listen.

But whenever Daddy turned the conversation to Josie and me—when he said let’s just teach them a number, see what they can do—Mama’s eyes would go cold. Absolutely not, she’d say. Over my dead body. Until one morning Mama and Josie and I heard a ruckus outside and went to the window. There was Daddy on the sidewalk beside an upright piano, a crowd at his back.

I don’t know what finally persuaded Mama: the sight of our father, sunburned and panting, arm draped over the piano as if it were a prize rhino he’d just shot down; the four men who emerged from the crowd to carry the piano up to the third floor, who laughed as they wiped the sweat from their faces, who insisted on kissing Mama’s hand and then toasting her fine specimen of a husband, who’d just moved that piano ten blocks, all by himself; his blistered feet and bloodied ankles, which she cleaned and bandaged. But the next morning, she took Josie and me to a shop on Twenty-Third Street and bought us tap shoes on credit. That afternoon, she sat down at the piano and taught us our first song. Just like that, we were an act: The Magnificent Singing Szász Twins.

Right away, Daddy started making costumes. He sewed skirts of rose tulle. He bent slim wires into the shape of butterfly wings and wrapped them in green net. He constructed denim overalls and red cotton work shirts for us to wear during choreographed trots on broomstick ponies. He dressed Josie in an ivory wedding gown and me in a shiny black tuxedo and a top hat fashioned from a scrap of black silk and some rolled-up pasteboard. Whenever he came home with another bolt of fabric Mama would scowl. She’d ask him if he’d married and murdered an heiress she didn’t know about. Sometimes he brushed her aside, sometimes he risked a fight by snapping back that the fabric had been a gift from a friend—they still had friends in the theater. But by the time he sat down at the sewing machine and fed a cotton cuff or a pleated panel of butter yellow organza under the needle, he would be grinning.

As the months wore on without a callback, let alone a job, no one blamed me, not out loud. But I could see as clearly as anyone that Josie’s voice was effortlessly sweet and true, while I had to try and try again to match the pitches Mama played on the piano. I knew that when Josie danced, her whole body seemed to float, as if carried by invisible strings, while I got stuck in the sludge of my own thoughts, trying to remember where my feet were to go next, how to hold my hands, how to keep my balance.

A year had passed, and all we had to show for our efforts was a trunk full of useless costumes. That morning, in the kitchen, I was certain nothing would come of Daddy’s latest creation, whatever it was, save a quarrel, a fact that struck in my belly with a hot, awful thud. A few nights earlier, I’d listened through the wall as Mama had begged Daddy to ask his friend Bert for some work. By then, from the glimpses I got of the lives of the other children who lived in our building and on our block, I had gleaned that normal fathers worked every day, while my father worked only occasionally. It was Mama who took in mending and laundry, Mama who sold paper fans out of a cart in Union Square, each fan printed with the name and biography of a star, while Josie and I played nearby, tethered to the cart with a length of clothesline. I knew that Josie was like Mama—it was something people always said—but in a way I couldn’t explain I sensed that I was like her too, that we worried with the same heat, while Josie and Daddy seemed hardly to worry at all.

I sighed again, a little louder this time, but Josie’s eyes were fixed on Daddy, her spoon gripped tightly in her fist. Daddy draped the costume over his arm, delicately, as if he were handling a fine French frock, though this garment, a corset-like contraption with open sides, was obviously improvised. Buckles lined both edges of the back panel, matched on the front by short belts. It took me a moment to recognize that the garment was double wide: its two neck holes were separated by a strip of canvas.

Mama tapped a little ash from her cigarette into a tin can on the narrow counter and looked at him, as if to say, “Well?”

In a single, swift motion, he stepped toward the table and lifted our bowls.

The bowls crashed into the sink.

We stood. He pushed my shoulder into Josie’s and lowered the harness over our heads, then threaded the buckles with the belts and pulled them tight, crunching our inside arms together. Josie’s eyes didn’t fall from Daddy’s face, not for a second. After he’d yoked us in, he wrapped one hand around our waists—our waist—and lifted.

The enamel tabletop was clammy against the bottoms of my feet. Daddy turned to Mama, raised his fist against his lips, and blew as if it were a trumpet: Ta-ta-ta!

“I present to you, Josephine and Harriet Szász, the Siamese Twins who will also dance and sing!”

The lid rattled softly on the pot. The shadows of raindrops twitched along the foggy window. The harness crushed my arm so tightly against my ribs that I could feel my heartbeat in my armpit. I worried Josie could feel it too, that it was communicating to her the fact of my fear. All year, she had been alert to my fear. In hallways before auditions she would sometimes pinch me from wrist to elbow, to distract me, she said, but she couldn’t do that now, any more than Mama could lean over and whisper in my ear, “Big girls don’t cry, Harriet.”

Daddy’s explanation came tumbling out: he’d been to the library, he said, and history proved his case. Chang and Eng. The Two-Headed Nightingale. The Chalkhurst Sisters. Twins were a dime a dozen, Daddy said. We were pretty girls, maybe we could carry a tune, but that didn’t make us special.

Elizabeth Weiss earned an MFA from the Iowa Writers’ Workshop, where she was a Truman Capote Fellow. Her nonfiction has been published in The New Yorker online. She has taught for the University of Iowa, the Iowa Young Writers’ Studio, and the Sackett Street Writers’ Workshop, and is a mentor for the Minnesota Prison Writing Workshop. She lives in Minneapolis with her spouse, daughter, and dog. 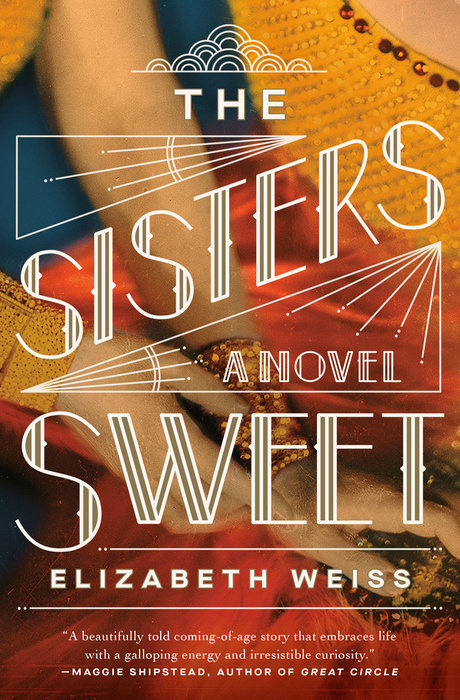