In this “deliciously incisive” (Publishers Weekly) debut, a young woman finds herself inexorably drawn to repeating the worst mistakes of her past, for readers of Marlena and Social Creature.

“An utterly taut construction, as unsettling as it is propulsive . . . McCarthy’s debut, with the acumen of the best literary fiction and the suspense of a psychological thriller, is a marvel.”—Kirkus Reviews

“Masterly, mendacious, and a total thrill ride . . . Not since a certain Mr. Ripley have I been so consumed in another's covetous desires.”—Justin Torres, bestselling author of We the Animals

At age thirty, Rose is fierce and smart, both self-aware and singularly blind to her power over others. After moving to New York, she is unexpectedly swallowed up by her past when she reunites with Lacie, the former best friend she betrayed in high school. Captivated once again by her old friend’s strange charisma, Rose convinces Lacie to let her move in, and the two fall into an intense, uneasy friendship.

While tutoring the offspring of Manhattan’s wealthy elite, Rose works on a novel she keeps secret—because it stars Lacie and details the betrayal that almost turned deadly. But the difference between fiction and fact, past and present, begins to blur, and Rose soon finds herself increasingly drawn to Lacie’s boyfriend, exerting a sexual power she barely understands she possesses, and playing a risky game that threatens to repeat the worst moments of her and Lacie’s lives.

Sharp-witted and wickedly addictive, Everyone Knows How Much I Love You is a uniquely dark entry into the canon of psychologically rich novels of friendship, compulsive behavior, and the dangerous reverberations of our actions, both large and small.

An excerpt from Everyone Knows How Much I Love You

As many times as I’ve tried I can’t go back. As many times as I’ve sat writing at my desk—­so many different desks, in so many different cities—­that exact moment on the road remains blank. What was in my mind? I’ve tried to find it. I’ve conjured. Fibbed. Faked it, and let it remain the lie in the middle of my novel, the improvisation, the patch. The caulk over the crack in my memory.

At the time everyone wanted to know what I’d been thinking, and maybe lying so often lost me access to the truth. Not the truth, but the feeling. “You just . . . overshot the curve?” my mom said. “Was there a deer?” a cop asked. “Another car?” his buddy guessed. They were so desperate to understand. To diminish what I’d done. Decipher it. “So you swerved . . .”

I did swerve. But it wasn’t a flinch. It wasn’t a mistake. There was a column of rage in me, a crackle of blue flame, clarifying. The whole problem—­as I recall—­was that Leo kept talking. Leo wouldn’t shut up. It was past one in the morning and he wouldn’t stop talking about Lacie and so I turned the wheel.

Did I simply want to scare him? That might be too generous. But even now, all these years later, trying once again to summon the moment, all I find is static.

The moment afterward I remember. The moment afterward, indelible. Before the sirens, before the ambulance, before all the flashlights and noise and shouting, there was just a quivering hush, the trickling creek, and my beautiful boy, my best friend’s boyfriend, his warm blood all over my lap.


August, and a gray sweaty shimmer lay over Bryant Park. Cops stood around looking bored. A homeless man keened. Women in pencil skirts unwrapped greasy sandwiches with quick, surgical fingers, or forked up massive bites of salad. They ate quickly, alone; they had come to enjoy being outside, in this “urban oasis,” yet their shoulders were hunched and their eyes lowered.

But who was I to judge? I, too, sat at a little green table with my shoulders hunched; I, too, tapped my cell phone and darted my eyes. Wishing I had chosen a coffee shop—­someplace normal—­though at the time Bryant Park had made sense. Lacie lived in Brooklyn; I was staying with my cousin in Queens. There was the meeting with Portia Kahn, my so-­called agent, which would bring me to Midtown anyway. And I was broke. Even four dollars for tea—specially four dollars for tea—­seemed unbearable to me. So I had suggested this glade of green where we could sit for free.

While I waited I watched a woman at a sandwich kiosk feebly disguised as an antique gazebo. She wore a loose black jumpsuit and espadrilles. She had a tote bag. Her brown curls were carelessly pulled into a messy topknot. She was not like the office drones; in fact, I could almost imagine myself, once I had settled into my New York life, dressing something like her. Up at the green-­black trees she gazed. Then she turned.

Everything slowed. My lizard brain knew her. Even from across the park I knew. That tilt of the head, the squint as she scanned the tables. I had a sudden instinct to hide. Too late—­she had spotted me, was even now rushing across the park, calling “Rose!”

Then she stopped short. We met each other’s eyes. We stared deep. We looked the way you look in a mirror when you are alone: blatant, utterly unself-­conscious. “Wow,” she murmured. “It’s been so long. It’s been forever.”

Time had sharpened her face, and it was strange to see her with a few strands of silver hair. Yet in her gray eyes, and the vexed, pointed chin, there was still Lacie.

The spell broke—­she broke it with a tentative smile—­and we embraced. Inside my arms she smelled of sweat and summer. Everything came back to me. Lacie, Lucinda Salt. Here. I shuddered.

She pulled back. “Want to sit? Do you still have some time?”

“So much time,” I said, and then regretted my honesty. I couldn’t stop looking at her. Her eyes, I thought. What drives men crazy are her eyes.

She had come back into my life in that most quintessential of contemporary ways, the email. A shy, tentative email. Twelve years it had been. Not a word since high school, and then suddenly her name on my screen. I’ve been seeing someone you know . . . Ian, apparently, had brought up my name; he had been the one to share my email address.

“I can’t believe you know Ian,” I said once we had settled ourselves at my table. I tried to keep my voice offhand.

“I can’t believe you know him.” She twisted the cap off her iced green tea and took a tiny, nervous sip. “When he was like, ‘My friend Rose is moving to town,’ I thought, I used to have a friend named Rose . . .”

Used to, so casual on her lips, startled me. I tried to match her bright tone. “So you guys are dating?”

“Apparently.” An ironic twist to her lips. “I hope you don’t mind me reaching out. It was his idea.”

In the hollow of her throat, a tendon was jumping. I felt it in my own neck. The rigid angle of her arm: my arm, too, was oddly bent. Always between us there had been this symmetry, this sympathetic pain, born of thousands of hours of sleepovers and creek walks, born, I think, of being children together. A kinship between our cells. I realized what I should have known right away: she didn’t want to be here. She had come for him.

We locked eyes again, and in that moment I knew—­but the kind of knowledge that is like a dream, so that you doubt it afterward, if you even remember it—­that I had haunted her twenties the way she had haunted mine. I had lived inside her brain. I knew it.

Kyle McCarthy is a graduate of the Iowa Writers’ Workshop. Her fiction has appeared in The Best American Short Stories, American Short Fiction, and the Harvard Review, and she has received support and grants from the Edward F. Albee Foundation, the Lighthouse Works, and the Elizabeth George Foundation. She lives in Brooklyn, New York. 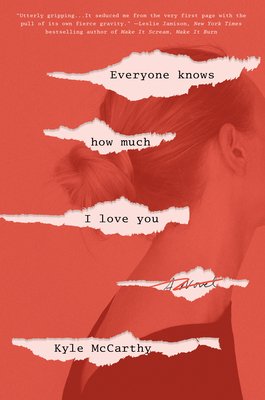