“Brilliant . . . To read this book is to become more human.”—Claudia Rankine, author of Citizen

Poet and essayist Cathy Park Hong fearlessly and provocatively blends memoir, cultural criticism, and history to expose fresh truths about racialized consciousness in America. Part memoir and part cultural criticism, this collection is vulnerable, humorous, and provocative—and its relentless and riveting pursuit of vital questions around family and friendship, art and politics, identity and individuality, will change the way you think about our world.

Binding these essays together is Hong’s theory of “minor feelings.” As the daughter of Korean immigrants, Cathy Park Hong grew up steeped in shame, suspicion, and melancholy. She would later understand that these “minor feelings” occur when American optimism contradicts your own reality—when you believe the lies you’re told about your own racial identity. Minor feelings are not small, they’re dissonant—and in their tension Hong finds the key to the questions that haunt her.

With sly humor and a poet’s searching mind, Hong uses her own story as a portal into a deeper examination of racial consciousness in America today. This intimate and devastating book traces her relationship to the English language, to shame and depression, to poetry and female friendship. A radically honest work of art, Minor Feelings forms a portrait of one Asian American psyche—and of a writer’s search to both uncover and speak the truth.

“Hong begins her new book of essays with a bang. . . .The essays wander a variegated terrain of memoir, criticism and polemic, oscillating between smooth proclamations of certainty and twitches of self-doubt. . . . Minor Feelings is studded with moments [of] candor and dark humor shot through with glittering self-awareness.”—The New York Times

“Hong uses her own experiences as a jumping off point to examine race and emotion in the United States.”—Newsweek

“Powerful . . . [Hong] brings together memoiristic personal essay and reflection, historical accounts and modern reporting, and other works of art and writing, in order to amplify a multitude of voices and capture Asian America as a collection of contradictions. She does so with sharp wit and radical transparency.”—Salon

An excerpt from Minor Feelings

My depression began with an imaginary tic.

For an hour, I stared at the mirror, waiting for my eyelid to flutter or the corner of my mouth to tingle.

“Do you see my tic?” I asked my husband.

“Do you see my tic now?” I asked my husband.

“Do you see my tic now?” I asked my husband.

In my early twenties, I used to have an actual tic in my right eyelid that spread so that my right facial muscles contracted my eye into an occasional Popeye squint. I found out I had a rare neuromuscular condition called hemifacial spasm, triggered by two cranial nerves behind my ear that became twisted. In 2004, when I was twenty-six years old, a doctor in Pittsburgh corrected my spasms by inserting a tiny sponge to separate the two entwined nerves.

Now, seven years later, I was convinced my spasms had returned—­that somehow the sponge had slipped and my nerves had knotted themselves up again. My face was no longer my face but a mask of trembling nerves threatening to mutiny. There was a glitch in the machine. Any second, a nerve could misfire and spasm like a snaking hose hissing water. I thought about my face so much I could feel my nerves, and my nerves felt ticklish. The face is the most naked part of ourselves, but we don’t realize it until the face is somehow injured, and then all we think of is its naked condition.

My self-­conscious habits returned. I found elaborate ruses to hide my face in public, cradling my cheek against my hand as if I were in constant dismay, or looking away to quietly ponder a question about the weather when all I could think of was my ticklish nerves that could, any second, seize my face into a tic.

There was no tic.

It was my mind threatening mutiny. I was turning paranoid, obsessive. I wanted someone to unscrew my head and screw on a less neurotic head.

I lived in a beautiful rent-­stabilized loft on an unremarkable corridor of Lower Broadway known for its retail jeans stores that pumped out a wallpaper of Hot 97 hits. I was finally living the New York life I wanted. I was recently married and had just finished writing a book. There was no reason for me to be depressed. But anytime I was happy, the fear of an awful catastrophe would follow, so I made myself feel awful to preempt the catastrophe from hitting. Overtaxed by this anxiety, I sank into deep depression. A friend said that when she was depressed, she felt like a “sloth that fell from its tree.” An apt description. I was dull, depleted, until I had to go out and interface with the public, and then I felt flayed.

I decided to see a therapist to treat my depression. I wanted a Korean American therapist because I wouldn’t have to explain myself as much. She’d look at me and just know where I was coming from. Out of the hundreds of New York therapists available on the Aetna database of mental health care providers, I found exactly one therapist with a Korean surname. I left a message for her and she called me back. We set up a consultation.

Her small, dimly lit waiting room had a framed Diego Rivera poster of a kneeling woman holding a giant basket of calla lilies. The whole room was furnished in Rivera’s tranquilizing palette: the brown vase of cattails, the caramel leather armchair, a rug the color of dying coral.

The therapist opened her door. The first thing I noticed was the size of her face. The therapist had an enormous face. I wondered if this was a problem for her, since Korean women are so self-­conscious about the size of their faces that they will go under the knife to shave their jawlines down (a common Korean compliment: “Your face is so small it’s the size of a fist!”).

I went into her office and sat down on her couch. She told me she was going to begin with some standard consultation questions. The questions she asked were indeed standard: Was I hearing voices in my head? Having suicidal thoughts? I was soothed by how standard these questions were since it assured me that my depression was not in fact me but a condition that was typical. I answered her consultation questions despondently; I might have even hammed up my despondency, to prove to her, and myself, that I needed to be there. But when she asked, “Was there ever a time in childhood where you felt comfort?” I searched for a memory, and when I couldn’t recall a time, I collapsed into sobs. I told her the beginning of everything—­my depression, my family history—­and when our consultation was over, I felt remarkably cleansed. I told her I’d like to see her again.

“I’m not sure I’m taking any more patients with Aetna,” the therapist said neutrally. “I’ll contact you soon.”

The day after, I went ahead and called her office phone to set up another appointment. When I didn’t hear from her after twenty-­four hours, I left two more messages. The following day, she left a voicemail, telling me she couldn’t take me as a patient since she’d decided to stop taking Aetna insurance. I immediately called back and left my own voicemail explaining that Aetna would reimburse me 80 percent for all out-­of-­pocket costs. She didn’t return my call. Throughout the week, I left four more voicemails, each one more desperate than the last, begging for her cell number so we could text about this. Then I began to randomly call her and hang up when I got her machine, hoping to catch her between appointments. I did this half a dozen times per day, until it dawned on me that she might very well have caller ID, which shamed me so badly I slunk into bed and didn’t come out for the rest of the day. Finally, she left another terse message: “It’s a lot of paperwork for you to be reimbursed.” I speed-­dialed her number and shouted into her machine: “I can handle the paperwork!”

While I was waiting for her to call back, I had to attend a reading at the University of Wyoming in Laramie. At this point, I was severely depressed. It was a miracle that I managed to board a plane when all I wanted to do was cut my face off. As expected, the reading went badly. To recite my poems to an audience is to be slapped awake by my limitations. I confront the infinite chasm between the audience’s conception of Poet and the underwhelming evidence of me as that poet. I just don’t look the part. Asians lack presence. Asians take up apologetic space. We don’t even have enough presence to be considered real minorities. We’re not racial enough to be token. We’re so post-­racial we’re silicon. I recited my poems in the kazoo that is my voice. After my reading, everyone rushed for the exit.

At a layover in the Denver airport on my way back to New York, I saw the therapist’s number on my phone. “Eunice!” I shouted into the phone. “Eunice!” Was it rude to call her by her first name? Should I have called her Dr. Cho? I asked her when I could make my next appointment. Her voice was cold. “Cathy, I appreciate your enthusiasm,” she said, “but it’s best you find another therapist.”

“I can’t be your therapist.”

“We’re not right for each other.”

I was shocked. Every pore in my skin sang with hurt. I had no idea that therapists could reject patients like this.

“Can you tell me why?” I asked feebly.

“You’re not going to give me a reason?”

“I’m not allowed to reveal that information.”

“Is it because I left too many voicemails?”

“Are you seeing someone I know?”

“Not to my knowledge.”

“Well, that’s how I’m going to feel if you don’t tell me why. You’re making me feel like I should never open up and never share my feelings because I’m going to scare everyone away with my problems! Isn’t this the opposite of what a therapist is supposed to do?”

“I understand how you feel,” she said blandly.

“If I do anything drastic after this phone call, it will be all your fault.”

“This is your depression talking.”

“I have another patient waiting,” she said.

Cathy Park Hong is the author of three poetry collections including Dance Dance Revolution, chosen by Adrienne Rich for the Barnard Women Poets Prize, and Engine Empire. Hong is a recipient of the Windham-Campbell Literature Prize, a Guggenheim Fellowship, and a National Endowment for the Arts Fellowship. Her poems have been published in Poetry, The New York Times, The Paris Review, McSweeney’s, Boston Review, and other journals. She is the poetry editor of The New Republic and full professor at the Rutgers University–Newark MFA program in poetry. In 2021, she was named one of Time’s 100 most influential people in the world. 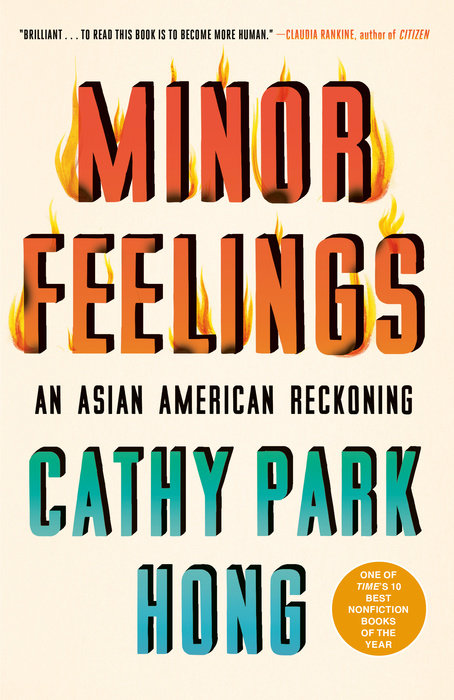