NATIONAL BESTSELLER • The jaw-dropping conclusion to the acclaimed Founders Trilogy, from the Hugo–nominated author of Foundryside and Shorefall

Sancia, Clef, and Berenice have gone up against long odds in the past. But the war they’re fighting now is one even they can’t win.

This time, they’re not facing robber-baron elites or even an immortal hierophant, but an entity whose intelligence is spread over half the globe—one that uses the magic of scriving to control not just objects but human minds.

To fight it, they’ve used scriving technology to transform themselves and their allies into an army—a society—unlike anything humanity has seen before. With its strength at their backs, they’ve freed a handful of their enemy’s hosts from servitude, and even defeated some of its fearsome, reality-altering dreadnoughts.

Yet despite their efforts, their enemy marches on. Implacable. Unstoppable.

Now, as their opponent closes in on its true prize—an ancient doorway, long buried, that leads to the chambers at the center of creation itself—Sancia and her friends glimpse a last opportunity to stop this unbeatable foe. To do so, they’ll have to unlock the centuries-old mystery of scriving’s origins, embark on a desperate mission into the heart of their enemy’s power, and pull off the most daring heist they’ve ever attempted.

But their adversary might have a spy in their ranks—and a last trick up its sleeve.

And to have a chance at victory, Sancia, Clef, and Berenice will have to make a sacrifice beyond anything that’s come before.

An excerpt from Locklands


Are you ready? whispered a voice.

Berenice opened her eyes. The morning sunlight reflected brightly off the ocean, and her vision adjusted slowly, the forms of the city walls and the ramparts and the coastal batteries calcifying in the glimmering light. She’d been meditating so deeply it took her a moment to remember—Am I in Old Tevanne? Or somewhere else?—but then her senses fully returned to her, and she saw.

Grattiara: a tiny fortress enclave balanced atop a thread of stone stretching into the Durazzo Sea, all ocean-gray walls and cloudwhite towers and wheeling gulls. It wasn’t quite a town as much as a residue of civilization clinging to the battlements, the homes and huts like barnacles spreading across the hull of a ship. She watched as the little fishing boats trundled up to the piers, their sails pale and luminescent. They reminded her faintly of bat wings catching the first rays of dawn.

Almost. Claudia moved to stand next to her at the balcony, her eyes hard and sharp under her dark metal helmet. Her voice whispered in the back of Berenice’s thoughts, quiet but clear: How far we've fallen, to find a little shithole like this pretty.

Yes, sighed Berenice. And yet, it's up to us to save it.

Claudia picked her teeth with a length of wood. Or at least the people here, anyways. She flicked her toothpick away. So—you ready?

Like a grim warrior queen, said Claudia. She grinned. Maybe a little too grim. This is a Morsini fortress, mind. The governor might not take to an imtimidating woman.

It's going to be a grim conversation. But I'll make sure to do a lot of smiling and bowing, she added acidly. She adjusted the way her cuirass hung on her shoulders, feeling the flex and bend of the pauldrons, then plucked at the leather shirt at her neck to let some of the humidity out. Their armor was a far sight from anything like a lorica, as it only covered critical exposures while leaving the joints free to move, but it was still hot as hell in the Grattiaran sun.

It'll have to do, Berenice said. She slung her espringal over her back, then checked to make sure her scrived rapier was sheathed at her side. Are the espringals rigged up properly?

We'll have to get within line of sight with them, said Claudia. She pointed to a small plate on her right pauldron, then the same on Berenice’s armor. But they'll come to us when we call them.

Still think it's wise to bring weapons to this chat? I mean—they're going to make us disarm before we see the governor, yeah?

Oh, almost certainly, said Berenice. But being asked to disarm is a terrific opportunity to show off how many armaments you're packing.

The winds shifted, and the reek of rot wormed into Berenice’s nostrils—undoubtedly from the refugee camp sprawling beyond the city’s fortifications. She slipped out her spyglass and glassed the camps on the hills to the northwest.

It all made for a cruelly pointed contrast: the town of Grattiara remained more or less impeccable, its scrived coastal batteries huge and hulking along the sea, the towers of the innermost fortifications still tall and elegant; but mere yards from them lay field upon field of ragged tents and improvised shelters and spoiled waters—a reminder of how much the world had changed beyond this tiny fortress town.

Berenice turned to look. A small group of men were making their way down the stairs from the central keep’s gates, all colorfully dressed in shades of blue and red. She studied the keep above, its towers bedecked with espringal and shrieker batteries—scrived models she knew were at least four years out of date. And the walls, of course, weren’t scrived at all, just brick and mortar and decades of patching: no sigils, no strings, no arguments embedded in them to trick them into being preternaturally durable or strong.

“Once it gets here,” she murmured aloud, “it’s going to tear through this place like a hot knife through eel fat.”

Yeah, said Claudia. She peered out at the refugee camp. And all those people are going to die—or worse.

How long do we have, again?

Last estimate was two weeks, she said. It'll have to go through Balfi to the north, and that should slow it down, we hope. We should have at least a week before it's at the gates here, Capo.

Berenice wondered whether those estimates were accurate. If she had a massive army, and intended to use it to annihilate everything in its path—what road would she take, which rivers, and how fast would she move?

How tired I am, she thought, of such grisly questions.

You still haven't answered me, Ber, said Claudia gently. Are you ready?

Getting there, she said. She walked to where the two other members of her team sat on a small bench before the end of the stairs. Diela, the younger and smaller of the two, popped to attention immediately, standing up so fast her helmet rattled on her head. Vittorio stood languidly, smirking as he unfolded his tall, lean form to stand beside her. He held a heavy wooden crate in his arms, about three feet wide and tall, built of plain wood with a hinged top fastened shut.

I'm ready to put this thing down and get out of the sun, Capo, whispered Vittorio in the back of her mind. He made eye contact with her, and his smile grew. You sure they're going to let me into the keep with this?

“They will,” she said. “Remember, both of you—this is purely a diplomatic operation. Just keep your eyes open, keep your gear tight and accessible—and if they make a move on us, remember your training.”

If it comes to that, fighting off a bunch of merchant house thugs should be easier than what we're used to, said Vittorio, now grinning.

Diela blinked beside him, and Berenice felt a slow anxiety building in the back of the girl’s thoughts.

It probably will not come to that, Berenice said to the girl. Again, this is a diplomatic mission. But even if you haven't seen fighting, Diela, you still know what we know, and you've seen what we've seen. I have no doubt you'll succeed.

Berenice looked up. The men from the keep were close now. She put on her helmet, adjusting it so her eyes looked through its visor properly, and strapped it tight. Eight years I’ve waged this war, she thought, and I still can’t get one of these goddamned things to fit right.

She stood there, tall and assured in her dark armor, and watched as the Morsini men descended the stairs. Once men like this would have frightened or at least worried her, but those days were long since gone: there had been too many battles, and far too much death and horror, for merchant house men to haunt her thoughts.

I’m ready, she thought to herself. I’m ready for this.

Yet she felt a flicker of insecurity, sensing an absence like she’d forgotten something critical. She pulled her spyglass from her pocket and peered through it once more, though this time she glassed the distant ocean, far to the south.

At first she saw nothing but sea, yet then she spotted it—a tiny dot in the distance, just on the horizon.

Sancia and Clef, she thought. Keeping their distance. But they’re there. She’s there.

She heard footsteps, and quickly stowed the glass away.

God, my love. How I wish you were with me here today.

A voice from the stairs, prim and assured: “The governor will see you now, General Grimaldi.”

ROBERT JACKSON BENNETT is the author of American Elsewhere, The Troupe, The Company Man, and Mr. Shivers, as well as The Divine Cities trilogy. His work has received the Edgar Award, the Shirley Jackson Award, and the Phillip K. Dick Citation of Excellence, and he has been shortlisted for the World Fantasy, British Fantasy, and Locus Awards. He lives in Austin with his family. 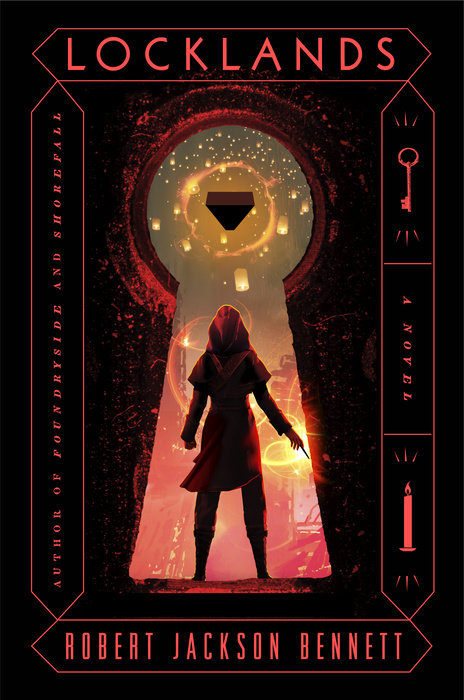