A woman trying to outrun her past is drawn to a coastal village in Maine—and to a string of unsolved murders—in this novel of romance and psychological suspense from New York Times bestselling author Tess Gerritsen.

After an unspeakable tragedy in Boston, Ava Collette flees to a remote village in Maine, where she rents an old house named Brodie’s Watch.

In that isolated seaside mansion, Ava finally feels at peace . . . until she glimpses the long-dead sea captain who still resides there.

Rumor has it that Captain Jeremiah Brodie has haunted the house for more than a century. One night, Ava confronts the apparition, who feels all too real, and who welcomes her into his world—and into his arms. Even as Ava questions her own sanity, she eagerly looks forward to the captain’s ghostly visits. But she soon learns that the house she loves comes with a terrible secret, a secret that those in the village don’t want to reveal: Every woman who has ever lived in Brodie’s Watch has also died there. Is the ghost of Captain Brodie responsible, or is a flesh-and-blood killer at work? A killer who is even now circling closer to Ava?

Praise for The Shape of Night

“Gerritsen is at her atmospheric best in this spine-tingling tale of a lone woman, an old house, and all the secrets everyone tries to hide.”—Lisa Gardner, #1 New York Times bestselling author

“Curl up in your favorite reading chair and let Tess Gerritsen whisk you away to a coastal town reminiscent of Daphne du Maurier’s best settings. You are in for a dark and sexy night, and you will be up very late with Tess’s twisted, haunting tale.”—Iris Johansen, #1 New York Times bestselling author

An excerpt from The Shape of Night

Even now I still dream about Brodie’s Watch, and the nightmare is always the same. I am standing in the gravel driveway and the house looms before me like a ghost ship adrift in the fog. Around my feet mist curls and slithers and it coats my skin in icy rime. I hear waves rolling in from the sea and crashing against the cliffs, and overhead, seagulls scream a warning to stay far, far away. I know that Death waits behind that front door, yet I do not retreat because the house is calling to me. Perhaps it will always call to me, its siren song compelling me to once again climb the steps to the porch, where the swing creaks back and forth.

I open the door.

Inside everything is wrong, all wrong. This is no longer the magnificent house I once lived in and loved. The massive carved banister is strangled by vines that twist like green serpents around the railing. The floor is carpeted by dead leaves which have blown in through shattered windows. I hear the slow tap, tap of rainwater dripping relentlessly from the ceiling, and I look up to see one solitary crystal pendant dangling from the skeletal chandelier. The walls, once painted cream and adorned with handsome crown molding, are now streaked with tentacles of mold. Long before Brodie’s Watch was here, before the men who built it hauled up wood and stone, hammered beams to posts, this hill where it stands was a place of moss and forest. Now the forest is reclaiming its territory. Brodie’s Watch is in retreat and the smell of decay hangs in the air.

I hear the humming of flies somewhere above me, and as I start up the staircase the ominous sound grows louder. The once-sturdy steps I climbed every night sag and groan with my weight. The banister, once polished to satiny smoothness, bristles with thorns and vines. I reach the second-floor landing and a fly appears, buzzing as it circles and dive-bombs my head. Another fly moves in, and another, as I start down the hallway toward the master bedroom. Through the closed door I can hear the flies’ greedy hum in the room beyond, where something has drawn them to feast.

I open the door and the hum instantly becomes a roar. They attack me in a cloud so thick I am choking. I wave and flail at them but they swarm my hair, my eyes, my mouth. Only then do I realize what has drawn the flies to this room. To this house.

Me. They are feasting on me.

I had felt no such apprehension on that day in early August when I turned onto North Point Way and drove toward Brodie’s Watch for the first time. I knew only that the road needed maintenance and the pavement was rippled by the roots of encroaching trees. The property manager had explained to me on the phone that the house was over a hundred fifty years old and currently still under renovation. For the first few weeks, I would have to put up with a pair of carpenters swinging hammers up in the turret, but that was the reason why a house with such a commanding ocean view could be rented for a song.

“The tenant who was renting it had to leave town a few weeks ago, months before her lease was up. So you called me at just the right time,” she said. “The owner doesn’t want his house to stand vacant all summer and he’s anxious to find someone who’ll take good care of it. He’s hoping to find another female tenant. He thinks women are much more responsible.”

The lucky new female tenant just happens to be me.

In the backseat my cat, Hannibal, yowls, demanding to be released from the pet carrier he’s been trapped in since we left Boston six hours ago. I glance back and see him glaring at me through the grate, a hulking coon cat with pissed-off green eyes. “We’re almost there,” I promise, although I’m beginning to worry that I’ve taken a wrong turn. Roots and frost heaves have cracked the pavement and the trees seem to crowd in ever closer. My old Subaru, already weighed down with luggage and kitchenware, scrapes the road as we bounce along an ever-narrowing tunnel through pines and spruce. There is no room here to turn around; my only choice is to continue up this road, wherever it may lead. Hannibal yowls again, this time more urgently as if to warn: Stop now, before it’s too late.

Through the overhanging branches I catch glimpses of gray sky, and the woods suddenly give way to a broad slope of granite mottled with lichen. The weathered sign confirms that I’ve arrived at the driveway for Brodie’s Watch, but the road climbs into fog so thick that I can’t see the house yet. I continue up the unpaved driveway, my tires sputtering and spitting gravel. Mist veils my view of windswept scrub brush and granite barrens but I can hear seagulls circling overhead, wailing like a legion of ghosts.

Suddenly there is the house, looming in front of me.

I shut off the motor and just sit for a moment, staring up at Brodie’s Watch. No wonder it had been invisible from the bottom of the hill. Its gray clapboards blend in perfectly with the fog and only faintly can I make out a turret, which soars into low-hanging clouds. Surely there’s been a mistake; I’d been told it was a large house, but I was not expecting this hilltop mansion.

I step out of the car and stare up at clapboards weathered to a silvery gray. On the porch a swing rocks back and forth, squeaking, as if nudged by an unseen hand. No doubt the house is drafty and the heating system is archaic and I imagine damp rooms and air that smells of mold. No, this is not what I had in mind as a summer refuge. I’d hoped for a serene place to write, a place to hide.

A place to heal.

Instead this house feels like enemy territory, its windows glaring at me like hostile eyes. The seagulls scream louder, urging me to run while I still can. I back away and I’m about to retreat to my car when I hear tires crunch up the gravel road. A silver Lexus pulls to a stop behind my Subaru and a blond woman climbs out, waving as she walks toward me. She’s about my age, trim and attractive, and everything about her radiates chipper confidence, from her Brooks Brothers blazer to her I’m your best friend smile.

As we shake hands, I’m already hunting for an excuse to back out of the rental agreement. This house is too big for me. Too isolated. Too creepy.

“Gorgeous spot, isn’t it?” Donna gushes, gesturing toward the granite barrens. “It’s a shame you can’t see anything right now with this weather, but when the fog lifts, the ocean view will knock your socks off.”

“I’m sorry, but this house isn’t exactly what—”

The front door swings open, revealing a gleaming oak floor and a staircase with an elaborately carved banister. Whatever excuses I had on the tip of my tongue suddenly evaporate and an inexorable force seems to pull me over the threshold. 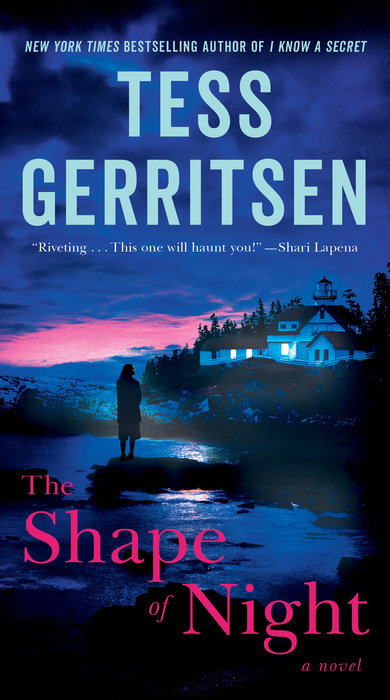