WINNER OF THE BARONDESS/LINCOLN AWARD • From the New York Times bestselling author of A. Lincoln and American Ulysses, a revelatory glimpse into the intellectual journey of our sixteenth president through his private notes to himself, explored together here for the first time

A deeply private man, shut off even to those who worked closely with him, Abraham Lincoln often captured “his best thoughts,” as he called them, in short notes to himself. He would work out his personal stances on the biggest issues of the day, never expecting anyone to see these frank, unpolished pieces of writing, which he’d then keep close at hand, in desk drawers and even in his top hat. The profound importance of these notes has been overlooked, because the originals are scattered across several different archives and have never before been brought together and examined as a coherent whole.

Now, renowned Lincoln historian Ronald C. White walks readers through twelve of Lincoln’s most important private notes, showcasing our greatest president’s brilliance and empathy, but also his very human anxieties and ambitions. We look over Lincoln’s shoulder as he grapples with the problem of slavery, attempting to find convincing rebuttals to those who supported the evil institution (“As I would not be a slave, so I would not be a master. This expresses my idea of democracy.”); prepares for his historic debates with Stephen Douglas; expresses his private feelings after a defeated bid for a Senate seat (“With me, the race of ambition has been a failure—a flat failure”); voices his concerns about the new Republican Party’s long-term prospects; develops an argument for national unity amidst a secession crisis that would ultimately rend the nation in two; and, for a president many have viewed as not religious, develops a sophisticated theological reflection in the midst of the Civil War (“it is quite possible that God’s purpose is something different from the purpose of either party”). Additionally, in a historic first, all 111 Lincoln notes are transcribed in the appendix, a gift to scholars and Lincoln buffs alike.

These are notes Lincoln never expected anyone to read, put into context by a writer who has spent his career studying Lincoln’s life and words. The result is a rare glimpse into the mind and soul of one of our nation’s most important figures.

An excerpt from Lincoln in Private

The Lyrical Lincoln: The Transcendence of Niagara Falls

Niagara-­Falls! By what mysterious power is it that millions and millions, are drawn from all parts of the world, to gaze upon Niagara Falls? There is no mystery about the thing itself. Every effect is just such as any intelligent man knowing the causes, would anticipate, without [seeing] it. If the water moving onward in a great river, reaches a point where there is a perpendicular jog, of a hundred feet in descent, in the bottom of the river—­it is plain the water will have a violent and continuous plunge at that point. It is also plain the water, thus plunging, will foam, and roar, and send up a mist, continuously, in which last, during sunshine, there will be perpetual rain-­bows. The mere physical of Niagara Falls is only this. Yet this is really a very small part of that world’s wonder. Its power to excite reflection, and emotion, is its great charm. The geologist will demonstrate that the plunge, or fall, was once at Lake Ontario, and has worn its way back to its present position; he will ascertain how fast it is wearing now, and so get a basis for determining how long it has been wearing back from Lake Ontario, and finally demonstrate by it that this world is at least fourteen thousand years old. A philosopher of a slightly different turn will say Niagara Falls is only the lip of the basin out of which pours all the surplus water which rains down on two or three hundred thousand square miles of the earth’s surface. He will estimate [with] approximate accuracy, that five hundred thousand [to]ns of water, falls with its full weight, a distance of a hundred feet each minute—­thus exerting a force equal to the lifting of the same weight, through the same space, in the same time. And then the further reflection comes that this vast amount of water, constantly pouring down, is supplied by an equal amount constantly lifted up, by the sun; and still he says, “If this much is lifted up for this one space of two or three hundred thousand square miles, an equal amount must be lifted for every other equal space, and he is overwhelmed in the contemplation of the vast power the sun is constantly exerting in quiet, noiseless operation of lifting water up to be rained down again.

But still there is more. It calls up the indefinite past. When Columbus first sought this continent—when Christ suffered on the cross—­when Moses led Israel through the Red-­Sea—­nay, even, when Adam first came from the hand of his Maker—­then as now, Niagara was roaring here. The eyes of that species of extinct giants, whose bones fill the mounds of America, have gazed on Niagara, as ours do now. Co[n]temporary with the whole race of men, and older than the first man, Niagara is strong, and fresh to-­day as ten thousand years ago. The Mammoth and Mastodon—­now so long dead, that fragments of their monstrous bones, alone testify, that they ever lived, have gazed on Niagara. In that long—­long time, never still for a single moment. Never dried, never froze, never slept, never rested.


The train carrying the Lincoln family from Buffalo to Niagara Falls passed close enough to the river for them to glimpse its white-­peaked rapids and hear its roar as it surged to the falls. Arriving at the small village on the American side of the falls in late September 1848, Lincoln, then one year into his congressional term as a representative for Illinois, his wife, Mary, and their two small sons, Robert and Eddy, checked into a tourist hotel.

Sometime in the afternoon, they boarded a carriage and crossed the three-­hundred-­foot bridge to Bath Island to register at the tollbooth, where Lincoln paid the price of admission of twenty-­five cents for full access to the falls area for up to a year.

The young family probably then strolled along a gravel path under the yellow and scarlet fall foliage of elm, ash, and maple trees, heading toward the thunderous roar of the waters of the Great Lakes as they plummeted 167 feet into a deep, surging pool.

Suddenly, there it was: Niagara Falls.

Lincoln’s visit to Niagara Falls prompted him to write his most lyrical surviving fragment. Captivated by America’s preeminent natural wonder of his day, his intellectual curiosity shines through in this private piece of writing. This reflection expresses a rhapsodic, imaginative spirit with a Thoreau-­like admiration for nature.

The note, at over five hundred words long, was designated as a fragment by Nicolay and Hay, Lincoln’s first biographers, because it ends abruptly with an incomplete sentence.

What drew Lincoln to Niagara Falls?

Congressman Lincoln, having just completed the first of two sessions of the 30th Congress, decided to spend part of the summer and fall recess campaigning in New England for the Whig presidential candidate, General Zachary Taylor. Months earlier, when he came out in favor of Taylor, Lincoln had made no bones about the pragmatism of his decision to support the slaveholding war hero, whose military bravery at the Battle of Buena Vista in America’s War with Mexico made him a popular figure. “I am in favor of Gen. Taylor as the whig candidate for the Presidency,” Lincoln wrote earlier that year to a fellow Whig, “because I am satisfied we can elect him, and that he would give us a whig administration, and that we cannot elect any other whig.”

Two months later, as the contest for the presidential nominee ramped up before the Whig convention would meet in June, Lincoln admitted that no one really knew where Taylor stood on many issues, but “I go for him, not because I think he would make a better president than [Henry] Clay, but because I think he would make a better one than [James] Polk, or [Lewis] Cass, or [James] Buchanan, or any such creatures, one of whom is sure to be elected, if he is not.” Lincoln had long idolized Clay, the Whig candidate who unsuccessfully ran for president in 1824, 1832, and 1844—­but in 1848 realism trumped idealism. Lincoln opposed the candidacies of Lewis Cass, the Democrat, and Martin Van Buren, running on a Free Soil ticket.

Lincoln and his family arrived in Massachusetts on September 12, 1848. He immediately set out on a speaking tour across the Bay State.

After the freshman congressman gave a speech in Taunton, Massachusetts, the Old Colony Republican, a Whig newspaper, captured the dynamism of his speaking style. “It was an altogether new show for us—­a western stump speaker.” The newspaper reporter described Lincoln: “Leaning himself up against the wall, as he commenced, and talking in the plainest manner, and in the most indifferent tone, yet gradually fixing his footing, and getting command of his limbs, loosening his tongue, and firing up his thoughts, until he had got possession of himself and of his audience.”

The content of Lincoln’s stump speech also fascinated the reporter. “Argument and anecdote, wit and wisdom, hymns and prophecies, platforms and syllogisms, came flying before the audience like wild game before the fierce hunter of the prairie.”

The western congressman won his way in speeches in Worcester, Lowell, Dorchester, Chelsea, Dedham, and Cambridge.

Lincoln’s speaking tour climaxed at a giant Whig rally at Tre­mont Temple in Boston, where he shared the platform with the main speaker, former New York governor William H. Seward. The soon-to-be-elected U.S. senator—January 1849—gave such a drawn-­out speech that Lincoln was not introduced until 9:30 p.m.

The late hour did not stop Lincoln from giving a one-­hour speech of his own, which caught the attention of the Boston Courier. Its reporter wrote that Lincoln spoke “in a most forcible and convincing speech, which drew down thunders of applause.”

Ronald C. White is the New York Times bestselling author of American Ulyssesand three books on Abraham Lincoln, most recently A. Lincoln. White earned his PhD at Princeton and has taught at UCLA, Colorado College, Whitworth University, and Princeton Theological Seminary. He has lectured at the White House, been interviewed on PBS NewsHour, and spoken about Lincoln in England, France, Germany, Italy, Mexico, and New Zealand. He is a reader at the Huntington Library and a senior fellow of the Trinity Forum in Washington, D.C. He lives with his wife, Cynthia, in Pasadena, California. 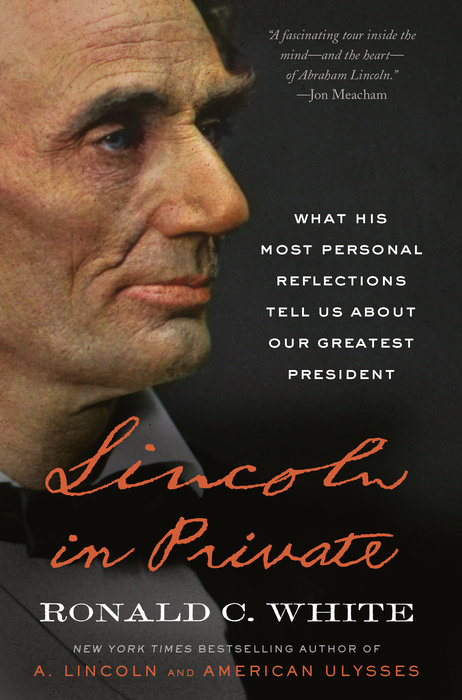