The Rise of Authoritarianism in the World We've Made

NEW YORK TIMES BESTSELLER • “Vital reading for Americans and people anywhere who seek to understand what is happening ‘after the fall’ of the global system created by the United States” (New York Journal of Books), from the former White House aide, close confidant to President Barack Obama, and author of The World as It Is

At a time when democracy in the United States is endangered as never before, Ben Rhodes spent years traveling the world to understand why. He visited dozens of countries, meeting with politicians and activists confronting the same nationalism and authoritarianism that are tearing America apart. Along the way, he discusses the growing authoritarianism of Vladimir Putin, and his aggression towards Ukraine, with the foremost opposition leader in Russia, who was subsequently poisoned and imprisoned; he profiled Hong Kong protesters who saw their movement snuffed out by China under Xi Jinping; and America itself reached the precipice of losing democracy before giving itself a fragile second chance.

The characters and issues that Rhodes illuminates paint a picture that shows us where we are today—from Barack Obama to a rising generation of international leaders; from the authoritarian playbook endangering democracy to the flood of disinformation enabling authoritarianism. Ultimately, Rhodes writes personally and powerfully about finding hope in the belief that looking squarely at where America has gone wrong can make clear how essential it is to fight for what America is supposed to be, for our own country and the entire world.

An excerpt from After the Fall

7
The House of Soviets


For much of the twenty-first century, Russia has led the counter­revolution to American domination—not by seeking to upend the global order that America constructed, but rather by disrupting it from within, turning it (and ultimately America itself) into the ugli­est version of itself. I think of how Russians must have seen us Amer­icans as I was growing up: capitalist stooges, driven entirely by a lust for profit; a militarized empire, unconcerned with the lives of the distant people harmed by our foreign policies; racist hypocrites, preaching human rights abroad and practicing systemic oppression at home. That’s the America that Putin wants the world to see, and that’s the America that Putin wants us to be.

Think about it. Isn’t that what you would want for someone that humiliated you? For them to be revealed, before the world, as the worst version of themselves? By doing so, Putin leveled the playing field—the world is what it is, a hard place in which might makes right, capitalism is as fungible as Communism, and a ruthless Russia will always have to be treated with the respect that it was denied after the wall came crashing down.

The city of Kaliningrad is one of those oddities of history, traded back and forth between empires and nation-states, swapping lan­guages and ethnic majorities, caught in the shifting currents of his­tory. Nestled between Poland and Lithuania along the Baltic Sea, it used to be the German city of Königsberg even though it didn’t bor­der Germany. After its brutal conquest by the Red Army, the city was renamed, Stalin repopulated it with Russians, and Kaliningrad served as the home for the Soviet Baltic fleet during the Cold War (as well as the home for some unverifiable number of nuclear weapons). After the disintegration of the Soviet Union, the Russians hung on to Kaliningrad even as neighboring Lithuania became free, leaving the city once again cut off from its nation—a part of Russia, two hun­dred miles from the Russian border. It was this peculiar political identity that drew me there in the summer of 2001—a twenty-three-year-old part-time teacher and graduate student with little idea what I was going to do with the rest of my life.

Before I got to Kaliningrad, I set foot on Russian soil for the first time, traveling through St. Petersburg and then the three Baltic na­tions, independent states for just a decade. St. Petersburg—Putin’s hometown—seemed to be covered in a layer of dust. The Hermitage held masterpieces on a par with those of any museum in the world, but it lacked what you’d take for granted in the West: fresh paint on the walls, central air conditioning, a pristine gift shop. The boule­vards were grand, but trash piled up on the sidewalks. In parks, menacing-looking men drank out of tall cans. Even the beer had an edge to it, a higher alcohol content that could more quickly make you forget whatever it was you didn’t want to remember. On the train ride out of the country, I fell asleep and my camera was stolen out of my backpack. By contrast, the Baltic capitals were largely re­furbished, on their way to becoming newly embraced members of the Western clubs—the European Union, NATO. Visiting the Baltics in 2001 was like going to a neighborhood in Brooklyn on the cusp of gentrification.

Kaliningrad, by contrast, felt forgotten by time. The only foreign tourists there other than stray backpackers like me were busloads of Germans, hoping to reconnect with some lost piece of their heritage. They walked in packs, cameras around their necks, the losers of World War II now exponentially wealthier than the Russians who’d conquered them and repopulated their city.
Among the low-rise apartment blocks and storefronts, a tower loomed. The House of Soviets was visible from almost all parts of the city. Construction had begun on the building more than forty years earlier, in 1970, among the ruins of the old Königsberg castle. The House of Soviets would be a living symbol of the fact that Com­munism triumphed over fascism. But the impulse for triumphalism backfired because the wet soil that the castle ruins sat on was like quicksand beneath the Soviet tower. Once the House of Soviets reached twenty-one stories, the engineers realized that it wasn’t going to be safe to complete without risking collapse. Construction was halted in the 1980s, and the giant structure stood empty until I laid eyes on it, an unfinished ruin. It did not take a literary mind to see the unpleasant concrete structure as a metaphor for the Soviet Union itself: an ideal that triumphed in war but proved incapable of meeting the basic needs of human beings or keeping pace with a changing world.

I passed a couple of uneventful days in Kaliningrad. One night, my friend and I went to a bar touted by our guidebook as the kind of place that drew a colorful assortment of gangsters, arms dealers, and artists. Unfortunately, that’s exactly who seemed to be there, and we finished our beers while reading danger in every glance thrown our way. As Americans cocooned by our Cold War victory and prosper­ity, we weren’t ready to confront the rough edges of the residue of the empire we had defeated. But still there was a feeling of invincibil­ity that came with the passport tucked into the cloth wallet affixed to my belt, stamped united states of america. This was the last trip I took outside the United States before 9/11, which changed every­thing about international travel, legitimized Putin’s instinct for bru­tality, and set in motion the chain of events that would somehow propel me—just seven years later—into the White House.

Looking back, I see that trip to Kaliningrad as one last journey through the post–Cold War world that America bestrode like a colossus—the total domination of global politics, economics, and in­stitutions, the sense that there was an inevitability to world events, the mindset that the rest of the world was a series of places on a map to be visited and measured against the clearly superior way of life that we’d fine-tuned. Even the calamities visited upon that world— a genocide in Rwanda or a war in the Balkans—were something that America could surely learn from and prevent from happening again, aided by think tank papers and Hollywood movies, like a well-intentioned sovereign striving to do better for his subjects. The idea that this kind of world order was even then contributing to a sense of rage and longing for more ancient identities that would lead to the destruction of the World Trade Center was something that my twenty-three-year-old liberal imagination was incapable of even con­templating. So was the idea that Russia would also eventually strike at the heart of American democracy, motivated by a similar cocktail of humiliation, rage, and longing for past greatness that would book­end my experience in the White House.

That was also the time before smartphones and GPS systems, when you planned itineraries days in advance, worked off guide­books and folded maps, and made your most interesting discoveries by accident. We ended our time in Kaliningrad by boarding an over­night bus that would take us to Warsaw. As we climbed on, I noticed that nearly all of the other passengers were older women carrying giant black plastic shopping bags. The shopping bags were full of bottles of vodka and cartons of cigarettes, and my more worldly—and Russian-speaking—companion deduced from eavesdropping and clipped conversation that these women made a living buying these goods at Kaliningrad prices, then selling them for a profit on the Polish side of the border.

There was tension in the quiet of the bus as we drove to a check­point at the border, where we were told to get off with our things. As we stepped off, the older women started running as fast as they could, clutching their bags tightly. They were pursued by the few border guards present, and I saw that this drama was a simple num­bers game—there were far more women than guards, so even though the guards could easily tackle a few to the ground, most of the women escaped into the darkness, to reap the few dollars to be made on a black market that had emerged over the previous decade.

Russian women, running into a country that Russians only re­cently ruled, to participate in the crudest form of capitalism. People’s wives and mothers and sisters. From the country that produced Dos­toyevsky, won World War II, and sent the first satellite into space. Standing there, even in my youth and naïveté, I experienced a brief wave of what it must have felt like to be a Russian in that time, a feel­ing not dissimilar to what one must have felt growing up in the shadow of the House of Soviets: a sense of bottomless humiliation and unutterable rage.

Ben Rhodes is the author of the New York Times bestseller The World as It Is, co-host of Pod Save the World, a contributor for NBC News and MSNBC, and an adviser to former president Barack Obama.

The Rise of Authoritarianism in the World We've Made 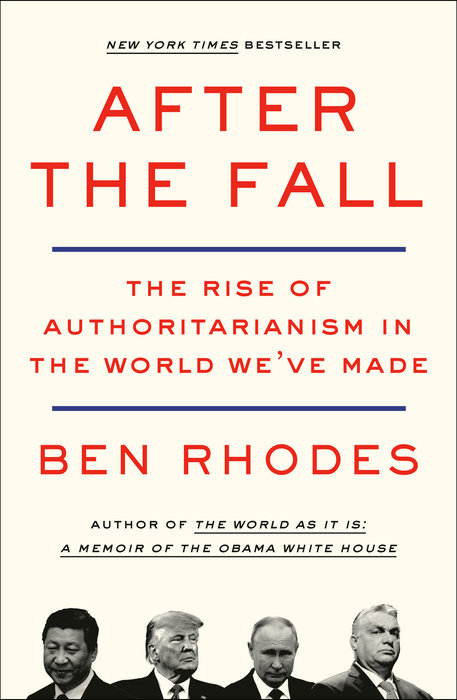