A groundbreaking tour of Southern craft bakeries featuring more than 75 rich, grain-forward recipes, from one of the leaders of the cold stone-milled flour movement in the South.

NAMED ONE OF THE BEST COOKBOOKS OF THE YEAR BY GARDEN & GUN • “I felt like I was there, on the journey with Jennifer Lapidus herself, as I read her beautifully written book.”—Peter Reinhart, author of The Bread Baker’s Apprentice

At Carolina Ground flour mill in Asheville, North Carolina, Jennifer Lapidus is transforming bakery offerings across the southern United States with intensely flavorful flour, made from grains grown and cold stone–milled in the heart of the South. While delivering extraordinary taste, texture, and story, cold stone-milled flour also allows bakers to move away from industrial commodity flours to create sustainable and artisanal products.

In Southern Ground, Lapidus celebrates the incredible work of craft bakers from all over the South. With detailed profiles on top Southern bakers and more than seventy-five highly curated recipes arranged by grain, Southern Ground harnesses the wisdom and knowledge that the baking community has gained. Lapidus showcases superior cold stone-milled flour and highlights the importance of baking with locally farmed ingredients, while providing instruction and insight into how to use and enjoy these geographically distinct flavor-forward flours. Southern Ground is a love letter to Southern baking and a call for the home baker to understand the source and makeup of the most important of ingredients: flour.

An excerpt from Southern Ground


If the fire went out, my eyes would open at exactly 2 a.m. From my bedroom within my little shotgun house adjacent to the bakery, even from a deep sleep, my body always knew 2 a.m. I’d be pulled from sleep because my wood was green or because it was raining, or both—moisture from the wood and the air threatened to smother the flames.

The evening before each bake, I’d carefully choose the wood that would burn in my oven—ideally, seasoned hardwood—aiming to get the right amount of heat built up within the time it took for my bulk doughs to ferment, get divided and shaped, and perform their final rise or proof. For twelve hours the fire would burn within the chamber that would eventually bake the bread. The fire burned to coals, the coals to ash. The ash was swept out and the hearth mopped clean before well-proofed loaves were loaded into the chamber and baked within the heat radiating from the oven’s mass. My normal baker’s hour was 4 a.m. For over a decade, this was my life. Rising before the sun, tending to fire, flour, water, and salt. With my Natural Bridge Bakery, located in the mountains outside of Asheville, North Carolina, I produced naturally leavened breads baked in a wood-fired brick oven. And then, after fourteen years, my focus shifted and my lens widened. I stepped away from baking and became a miller.


What started as a concept—to revive a regional grains economy centered on a community mill—became Carolina Ground, placing me, as miller, between the farmer and baker, bridging these worlds—from farm-grade to food-grade, from crop to ingredient. Cold stone-ground flour of predominantly Southern grains, this flour is the conduit between Southern, independent, often conservative farmers and innovative, mostly urban, Instagram-savvy bakers. Although I can never quite remove the baker from my core self, it was the flour that pulled me in this deep. How I arrived in the position of miller is one unbroken narrative—from baking for my community to harnessing a community of bakers. It is a narrative that seeks to reclaim elements of our past that I believe should never have been sacrificed in the service of progress.

I first attempted to bake bread in 1990, my junior year of college. Flour, water, salt, honey, oil, commercial baking yeast, and sometimes eggs and milk went into those loaves. I had my mother’s copy of Beard on Bread to guide me, and I stumbled through some pretty awful bakes before I finally began to find my way. With each bake, I understood a little bit more. Baking pulled me in. I was drawn to something at the core—a history, a story of a different time, and a different way of life. After graduation, I continued to bake weekly. I was studying for the LSATs, with plans to go to law school, and had started a little baking business out of my apartment. Friends and friends of friends picked up bread from me once a week. And with each weekly bake, my interest grew, and not just to baking, but to a deeper understanding of bread. I felt a familiarity with bread baking. It was a visceral attraction not grounded in my own experience of time and place. I began to wonder about the RapidRise yeast I was using. The claim rapid implied that there had been an improvement on a slower method, that something had come before in bread’s story. With each bake my gut kept telling me I was just skimming the surface. There was no World Wide Web to search yet, and very few publications addressed natural leavening at the time, as there were very few bakers producing naturally leavened breads. But I had this gut sense that the bread I was baking was not living up to the potential of what bread could be, so I began looking for the information, trying to find some crumb of evidence that revealed bread’s past. And then during a weekend work-stay on an organic farm in Blairsville, Georgia, at the end of a long day of weeding, I was flipping through a copy of Biodynamics Journal and came to an article entitled “Berkshire Mountain Bakery—The Art of Natural Baking.” The article was an interview with Berkshire Mountain’s baker, Richard Bourdon, and it began: “Before the art of baking joined forces with the brewing industry, the baker would assemble his commonplace ingredients on the stage—simple things the peasants knew quite well, like flour, water, and salt—mix them together, and then pull out something entirely different, something that could never have been predicted with those three humble ingredients.” Reading those first few words, I knew I had landed on something: I’d found a glimpse into bread’s past. The article’s author, Joel Morrow, affirmed, “The taste had nothing to do with the floury, yeasty, grainy, adulterated products that are passed off as bread today, even  in the organic health food industry,even among dedicated small organic bakers.” Here was the evidence: just three humble ingredients.

A few weeks later, at a local bookstore in Athens, Georgia, I picked up a copy of The Laurel’s Kitchen Bread Book and opened directly to a section titled “Flemish Desem Bread.” Laurel describes this naturally leavened old-world bread as “Composed of just a few ingredients—wheat, water, salt—the loaves are light and delicious without sweetener, milk, fat, or yeast ... To us, this is the perfect Staff of Life.” Laurel counsels the home baker that “it can be done, it is not all that difficult, and once you get set up, making the bread is simplicity itself.” One begins by making the desem (pronounced dayzum) culture or starter, what Laurel calls “the spirit or soul...that gives life to the dough.” The process sounded simple: just form a stiff dough ball out of flour and water, bury the dough ball in a sack of flour, and every day for two weeks, pull out the dough ball, discard half of it, dissolve the other half in water, add flour until another stiff dough ball is formed, and then bury it again in the sack of flour. But fresh stone-ground whole-wheat flour was listed as the first ingredient needed to make this bread. Although I could get whole-wheat flour in the bulk section of my local food co-op, I had no idea how the flour was milled or how fresh it was. I attempted to follow Laurel’s instructions, but my inability to find the key ingredient was disorienting. Developing the desem culture required temperatures ranging from 50° to 65°F. It was summertime in Georgia. I was to rely on my senses to guide the process—the smell of the dough ball each day—but nothing seemed right, and I wasn’t even sure if I would recognize right.

I was supposed to be studying for the LSATs, but I was determined to find my way with this bread, which morphed into finding bakers baking this bread. I wanted to see the bread being made, feel the dough, and smell the culture. In search of bakers, I scanned my bookshelf for the few baking books I owned and pulled down Uprisings, a compilation of recipes by cooperative and collective bakeries from around the country put together by the Cooperative Whole Grain Educational Association. On the inside cover I found a phone number and called. A friendly voice on the other end of the line informed me that bakers would be gathering for the association’s annual meeting in two weeks in Fayetteville, Arkansas, at a bakery that was producing desem bread.

Propelled by this single focus, I traveled to Arkansas. And I met bakers. Which was what led me in the opposite direction from law school to the hills of Marin County, California, and an apprenticeship with Alan Scott, a mythic figure who was baking naturally leavened whole-grain breads for his community in a wood-fired brick oven he’d built in his backyard.

Jennifer Lapidus is the founder and principal of Carolina Ground flour mill in Asheville, North Carolina. She launched Natural Bridge Bakery in 1994, where she milled her flours in-house and baked her naturally leavened breads in a wood-fired brick oven. Her bakery was the first of its kind in western North Carolina and was featured in Peter Reinhart’s Whole Grain Breads. Jennifer has appeared on The Splendid Table podcast and in the New York Times, Wall Street Journal, Bon Appétit, Food & Wine, Saveur, Taste of the South, and numerous other local publications. Jennifer sits on the board of Carolina Farm Stewardship Association and is co-organizer of the Asheville Bread Festival. 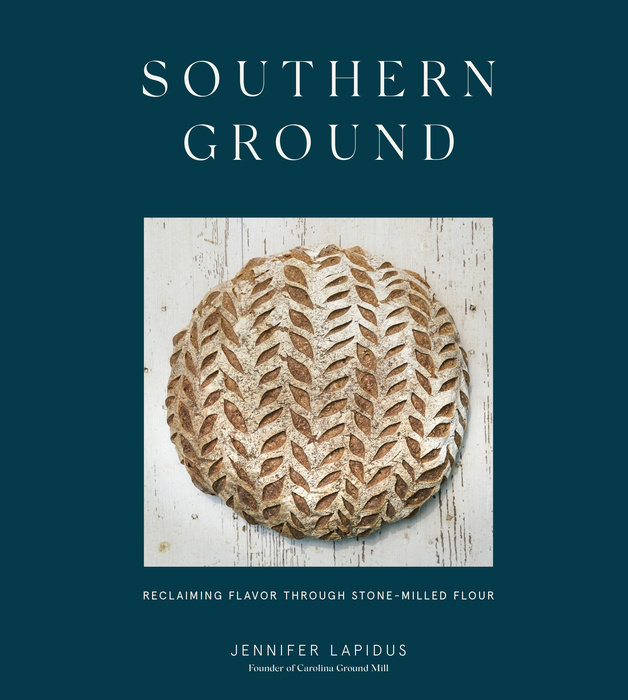