50 Simple and Satisfying Ways to Cook Dinner [A Cookbook]

A cookbook of 50 recipes that combines everyone’s favorite protein with the ease of cooking all on one pan, from a James Beard Award–winning food writer and TASTE contributor.

“For the chicken aficionado, Cathy Erway’s treatise is sure to delight. This gorgeous collection of delicious recipes is sure to bring joy to the cook and eaters alike.”—Nik Sharma, cooking columnist and author of Season and The Flavor Equation

Sheet Pan Chicken is a fresh, modern approach to cooking dinner all on one pan. These aren’t ordinary protein and potatoes dishes—they’re internationally-inspired recipes for roasting whole chickens, chicken breasts, legs, thighs, and wings but also chicken meatballs and chicken skewers. With Coriander-Crusted Chicken with Crispy Chickpeas and Pomegranate, Thai Yellow Curry Chicken Thighs with Cucumber Relish, Chicken Katsu with Plum Sauce, and much more, you’ll elevate your dinner game with new flavors and techniques while enjoying the ease of one-pan cooking.

An excerpt from Sheet Pan Chicken

Why the Chicken Crossed the Sheet Pan


The 1990s had the George Foreman Grill. The early 2000s were all about the Dutch oven. Today, you’d be hard-pressed to find a recipe without the words “Instant Pot” before it. These trendy, and often expensive, pieces of prized cooking equipment may tempt us every decade. But a sheet pan is eternal.

A sheet pan is for roasting at its most elemental. It’s the no-nonsense industrial workhorse of the home kitchen, conveniently built to maximize your sauced and seasoned ingredients’ exposure to hot air, creating bronzed surfaces and crisped bottoms. Casserole dishes, with their high sides, reduce airflow and prevent your food from browning as much as it could. Cast-iron pans, with their limited real estate, can only handle a small crowd. But shallow, rimmed sheet pans make efficient use of your oven space and your time, delivering everything from bronze-topped vegetables to crisped potatoes and chickpeas to umami-blessed roasted chicken. And it can be all yours for less than $30.

As the world’s second-biggest fan of chicken (the number one fan being my terrier mutt, Doug), I love it unconditionally, in all its forms. I love white meat, dark meat, chicken hearts, chicken feet, and whole rotisserie chickens from Costco. I’ve never met a sauced wing I didn’t like. I love a good, piping-hot fried chicken drumstick and a not-so-good leftover one, too. I love chicken almost as much as I love my mom’s Chinese dumplings (and no, you can’t have it both ways, because she only makes dumplings with pork). I show up to barbecues with marinated chicken to throw on the grill. And I love bringing cold chicken salad in Tupperware to a picnic—a habit that spawned a story I wrote for TASTE titled “The Subtle Thrills of Cold Chicken Salad,” which won me a James Beard Award.

Yet these two culinary love affairs of mine—roasting in sheet pans and chicken—didn’t really meet up until I was in my twenties. Growing up in New Jersey, my Taiwan-raised Chinese mom cooked pretty much everything on the stovetop—often stir-fries that crackled in a deep chef ’s pan. My American father, born in upstate New York, also didn’t really use the oven unless it was for a Thanksgiving turkey or pies; long-simmered stews like chili were more his style. In my youth, the family oven was often used for storing cookware, like an extra cupboard.

Roasting was my solo expedition, which began as an adult in my own kitchen (a typically small New York City one, as I have lived in Brooklyn for the last sixteen years). Enriched by a community of similarly food-obsessed friends, this journey was filled with discoveries that I relished and wrote about endlessly on my blog and in my first book, The Art of Eating In, published in 2010. The oven, I learned, was the gateway to so many treasures. It was where kale leaves crisped to the texture and flavor of nori. Where winter squash, halved and roasted cut-side down, bled sugars like sap and softened to fudgy smears of orange. The oven was where fatty fish fillets could cook evenly while crisping at their edges, where pork shoulder could languish and fulfill its destiny as tasty, citrusy morsels of carnitas. Where almost any vegetable—carrots, broccoli, brussels sprouts, eggplant, turnips, tomatoes—becomes not just beautifully caramelized but concentrated in flavor. And where chicken skin turns from pale, gelatinous sheaths to golden brittle. That’s the beauty of dry heat: zapping moisture so that the ingredients crisp and concentrate, intensifying in flavor like a tomato left in the sun to dry.

And this is the nexus of the recipes in this book: By roasting chicken on a sheet pan along with everything you want to eat with it, you have a family of ingredients that are individually intensifying in flavor while at the same time, by sheer proximity, leaching up the rendered juices and fats from the chicken, lifting up their flavors even more. Apples roasted without chicken on the same pan would be a much less exciting product (and a vegan one). Onions are not just onions once they’re on a sheet pan with chicken; you’re taking advantage of every droplet of the incredible flavor enhancer that is chicken fat—properly revered in traditional Jewish cooking and named schmaltz in Yiddish. And when you crisp the chicken skin, it’s worthy of grabbing the spotlight as in kawa yakitori, Japanese grilled skewers of just chicken skin.

Throughout this book, you’ll encounter different combinations of chicken, vegetables, grains, and spices all undergoing this metamorphosis into a higher dimension of flavor together. In some of the recipes, you’ll see that those combinations were inspired by well-loved dishes that are not typically cooked on a sheet pan. They might have roots in other cooking methods, such as over an open fire, or in a big old pot, or whatever it made the most sense to cook in at the time and place the dish came into being (in the case of the New England clambake–inspired recipe on page 53, that happened to be a dug-out trench in the sand).

I’m convinced that roasting chicken is one of the easiest ways to coax out all the flavors and features chicken provides, from the sweet, sticky glaze that may form on its skin to the seasoned juices that run freely from a wingette’s succulent flesh. And unlike stovetop preparations, you’re not constantly tossing things around in a splattering pan. There’s something so satisfying about wiping your hands and walking away from the kitchen for a good while after you’ve shoved a sheet pan in the oven. It’s one of the few hands-off moments in cooking. Set it and forget it, as the saying goes. So as a simple, flexible route to dinner, cranking up the oven and assembling ingredients on a sheet pan makes a lot of sense for home cooks today. And it’s very telling that this is a popular cooking method in home kitchens—rather than in restaurants, where the chef move of “picking up” (or finishing the dish) on the stovetop is more the rule than the exception. There are simply dishes and cooking practices that are well suited to home cooking, and there are those that are well suited to restaurant cooking, and these two styles do not overlap nearly as much as some cookbooks would like you to believe.

Once you know how to roast a sheet pan full of chicken and vegetables one way, you’re ready to start improvising with seasonal ingredients as they hit the farmers’ market. In most of these recipes, the prep work and oven time are relatively minimal, particularly in the first section, “On the Fly.” But there are always extra steps and tips that can really expand your cooking IQ: to ensure that the chicken skin is crispy as can be, or that the meat is supremely marinated, or just to do something kind of funky and out there—and also delicious. So the second section, “Worth the Wait,” is for those recipes that call for a longer lead time.

Most important, this cookbook gathers chicken recipes that really thrive on a sheet pan. Not every beloved dish, from every cuisine, translates well to this format. But I was delighted by the way oven-roasting some dishes, like Chinese Lion’s Head Meatballs (page 39), gave them wholly new dimensions, setting them apart from the original. And some dishes were just too irresistible not to give a sheet pan spin, like Mustard Chicken with Bacon, Mushrooms, and Onions (page 73), a hearty French stew. So I’ve taken inspiration from favorite chicken recipes from around the world—whether they originated on the hibachi or the stovetop or anywhere else—and I’ve asked a handful of cookbook authors with whom I’m enamored to contribute recipes for this book, too. Each of these women has greatly helped me understand the cuisines of their heritage through their work, so I’m grateful to feature recipes from Melissa Clark, Jenn de la Vega, Von Diaz, Pati Jinich, Yewande Komolafe, Preeti Mistry, Leela Punyaratabandhu, and Louisa Shafia, as well as recipes inspired by Darra Goldstein, Sara Jenkins, and Andrea Nguyen.

Developing dozens of sheet pan chicken recipes was a dream project that I took on with the passion of a chicken with too many delicious things to peck. I am so thrilled with the results of my many experiments and the recipes of those contributors, and I hope you will be, too. This is not haute cuisine, but recipes from and for the home cook, focused on a single, chicken-y theme you can feel empowered to riff on at your will. Simple, flexible, and delicious, these are the hallmarks of a winner chicken dinner in my book.

Cathy Erway is a James Beard Award-winning food writer with bylines in TASTE, Eater, Food & Wine, and more. She is the author of the cookbook, The Food of Taiwan: Recipes From the Beautiful Island, and the memoir, The Art of Eating In: How I Learned to Stop Spending and Love the Stove. She has hosted the IACP award-winning podcast Why We Eat What We Eat, and she currently hosts the podcast Self Evident, exploring Asian American identity. Her personal food blog is Not Eating Out in NY. Cathy lives in Brooklyn, New York.

50 Simple and Satisfying Ways to Cook Dinner [A Cookbook] 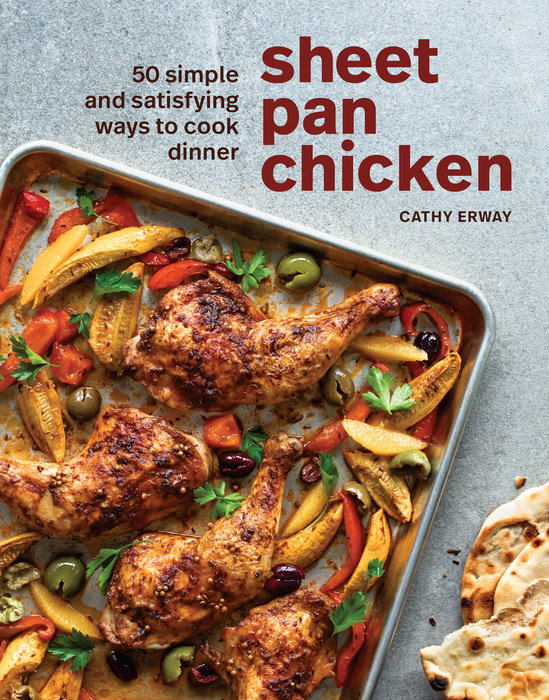