As one of the big names at his family’s gym, Legends, MMA star Rory Kavanagh is used to being in the spotlight—until a gruesome leg injury knocks him out of the cage. Rory is left feeling sidelined in more ways than one, battling the inner demons that come with losing the one shot at his dreams. Then Clare walks into his life and gives him a new dream: winning her heart. There aren’t many new faces in Woodlawn these days, but this tough, beautiful stranger makes Rory want to get his life back into fighting shape.

Clare Ivers doesn’t think she’ll be able to tell anyone what really brought her to the close-knit Bronx neighborhood where she just started bartending. But her life’s on pause and her past is catching up fast, try as she might to move on—with new friends, steady work, and a chiseled alpha male trying to get her attention. Even though Rory’s more than a little intense, she can’t deny that her heart beats faster when he looks at her with those soulful silver eyes. Clare thought she was done with love, but Rory might just be man enough to show her she thought wrong.

Praise for Breaking a Legend

“I loved this book. The romance gave me butterflies, the intimacy between the characters made me blush, and the drama made me hungry for more.”—Jamie Otis, reality television star, FYI’s Married at First Sight and ABC’s The Bachelor

“Breaking a Legend will suck you in from the very first page and refuse to let go until long after you’ve finished. It’s one of my favorite MMA books to date.”—#1 New York Times bestselling author Rachel Van Dyken

“Rory Kavanagh will have your Irish blood warming, even if you aren’t Irish. Sarah Robinson does an amazing job with this sexy, sweet, edge-of-your-seat romance.”—New York Times bestselling author Kelly Elliott

“Breaking a Legend is a steamy, white-hot romance that will leave you wanting more!”—New York Times bestselling author Lauren Hawkeye

An excerpt from Breaking a Legend


“I will tell you when I’ve had enough.” He spoke through clenched teeth, slowly raising his silver eyes to stare down the irritated bartender.

“Rory, come on. Don’t make me throw you out.” The bartender peered sideways at him, clearly exasperated as he draped a dishrag over one shoulder.

Rory Kavanagh narrowed his gaze, anger coursing through his blood as he contemplated reaching across and smashing the arrogant prick’s face right into the wooden bar. Instead, he stood and reached into the back pocket of his jeans, tightening his jaw in frustration. Separating a few bills from a rather thick wad of cash, he tossed them down next to his glass before turning and heading for the door.

As the infamous oldest Kavanagh brother stalked in their direction, the bouncers securing the entrance straightened, giving him a wide berth as he shoved his way out into the cold night air. Rory stumbled slightly as he turned right and slumped his shoulders, shoving his fists into his jacket pockets to keep warm. The alcohol warmed his insides, but still wasn’t a match for the winter chill as he made his way north on Kepler Avenue in the Bronx.

Rory slid one hand out from its warm haven to shove back his messy long brown locks with a quick sweep of his fingers. Glancing around, he was a bit surprised not to see more people roaming about the Woodlawn neighborhood on a Saturday night. Taking advantage of the momentary privacy, he pulled out an orange pill bottle from his pocket, shaking a few white pills onto his palm. He closed the container and stuck it back in his coat before dropping the pills onto his tongue and swallowing them dry. He was used to the sensation as well as eager to feel the numbing he knew would soon follow.

Yawning slightly, he slid his phone out of his pocket and turned on the screen, revealing that it was already one in the morning. He was feeling tired, but he wasn’t ready to call it a night just yet. Turning at the next intersection, he made a beeline east to Katonah Avenue, eager to get to O’Leary’s Pub before their last call in an hour.

“Well, if it isn’t our long-lost brother,” a familiar voice said a few minutes later, as he meandered into the neighborhood bar that everyone he knew frequented. A hand clasped his shoulder. “Shit, Rory, where the hell have you been?”

Rory inwardly groaned as he turned to face his younger brother, Quinn Kavanagh. Rory wanted to wipe Quinn’s smug smirk off with his fist. He had been sporting that same cocky attitude since the moment he popped into this world, a trait that Rory found uniquely irritating.

Now I remember why I’ve been avoiding this bar, Rory thought as he forced a smile at his brother.

“Just stopping in for a quick drink, Quinn,” Rory said, attempting to make clear that he wasn’t interested in socializing.

He headed over to the long wooden bar that wrapped around two sides of the small pub and stood before walls of liquor bottles and televisions. Several bartenders moved around swiftly, filling drink orders and talking with the full crowd that O’Leary’s always attracted on weekend nights. Rory found an empty stool down at one end, far away from the door, and quickly staked his claim.

He saw Cian, who had worked at O’Leary’s for as long as he could remember, and nodded his head to him. Cian nodded back and put up his hand, indicating he would be over in a minute, as he finished serving the group of college-aged kids at that end of the bar. The door to the kitchen swung open and a short, petite blonde ambled through carrying a large bucket of ice that seemed much too heavy for her small frame to manage.

Rory smiled slightly as he lifted one eyebrow, watching her with interest while she carefully poured the ice over the liquor bottles that sat in a metal bin below the bar’s surface. She huffed and her face was slightly red at the task, but she still managed to completely empty the bucket’s contents evenly around each of the glass bottles.

He took advantage of her being distracted by her task to stare at her shapely legs, which disappeared under a short skirt barely longer than her small apron. Her skin was delicately pale and smooth, and he wondered what it would feel like to slide his fingers up the length of those legs. His eyes traveled up her body, disappointed that the thick, blond ringlets dangling halfway down her back were also hiding most of her face as she leaned over the bar. He wanted to see her perfectly sloped nose, catch her eyes with his, and see what her small pink lips would look like when they smiled.

Something about this woman was intriguing him, although he couldn’t pinpoint what.

Her work completed, she exhaled loudly and plopped the empty bucket at her feet, taking a breather. Rory chuckled lightly, finally grabbing her attention.

“You laughing at me?” She put her hands on her hips, daring him to make fun of her.

Her eyes narrowed as she spoke, but he was still able to catch a glimpse of the dazzling emerald color that contrasted against her light skin and golden hair so perfectly.

“Wouldn’t dream of it, mhuirnín.” A smile spread across his face as he watched her saunter over to him, her full, pink lips tightly pressed together in irritation.

“What’s that mean?” she asked when she reached him, standing across the bar with her arms folded across her chest and one hip tilted higher than the other. Her tone was defiant and he loved the feisty spirit she exuded.

“Mhuirnín? You’re all questions today. I’ll answer your question, if you answer mine.” Rory concentrated on keeping his speech normal and not slurring his words. He might have had a bit more to drink tonight than he had intended.

She turned away from him, looking back down the length of the bar and drumming her fingers on its surface.

Rory could sense her nervousness. He already missed her green gaze and silently begged her to turn back to him. There was something about her that stirred a protective instinct in him, a feeling entirely foreign toward anyone who wasn’t family. She was smiling, but there was an undercurrent of pain breaking through her friendliness.

“I guess that’s fair,” she relented, turning back to him and leaning against the wall.

“I haven’t seen you here before. What’s your name?” His question was simple, but the desire in his eyes was not as he licked his bottom lip and admired how perfectly her uniform hugged her curves, even on her small figure.

“Clare Ivers. I’m new in town. Needed a job.” She shrugged, not divulging much, but he felt a sliver of hope when he saw that the smile on her face had yet to disappear.

He knew that she could feel his attraction toward her when he saw the blush creep up her cheeks. The smile she couldn’t push away told him she was enjoying their banter as much as he was.

Sarah Robinson is the bestselling author of the Kavanagh Legends series, The Photographer Trilogy, and the Forbidden Rockers series. A native of Washington, D.C., Robinson has both her bachelor’s and master’s degrees in criminal psychology. She is married to a local police officer who is just as much of an animal rescue enthusiast as she is. Together, they own a zoo of rescue and foster animals. 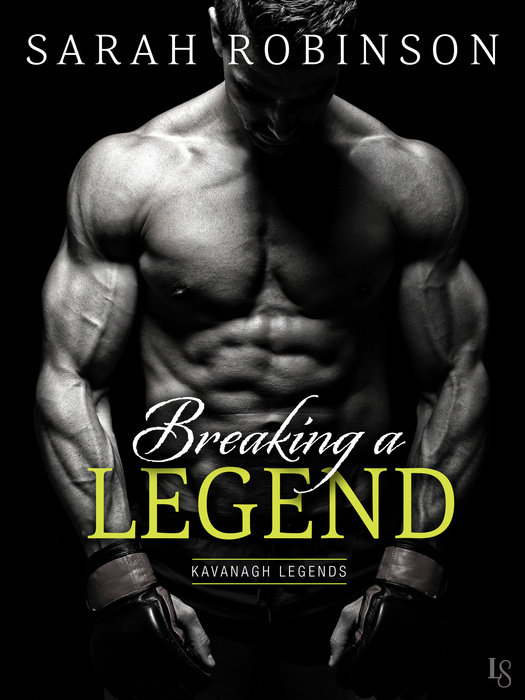