A queen, a castle, a dark and ageless threat—all await Mary Russell and Sherlock Holmes in this chilling new adventure.

The queen is Marie of Roumania: the doubly royal granddaughter of Victoria, Empress of the British Empire, and Alexander II, Tsar of Russia. A famous beauty who was married at seventeen into Roumania’s young dynasty, Marie had beguiled the Paris Peace Conference into returning her adopted country’s long-lost provinces, singlehandedly transforming Roumania from a backwater into a force.

The castle is Bran: a tall, quirky, ancient structure perched on high rocks overlooking the border between Roumania and its newly regained territory of Transylvania. The castle was a gift to Queen Marie, a thank-you from her people, and she loves it as she loves her own children.

The threat is . . . well, that is less clear. Shadowy figures, vague whispers, the fears of girls, dangers that may be only accidents. But this is a land of long memory and hidden corners, a land that had known Vlad the Impaler, a land from whose churchyards the shades creep.

When Queen Marie calls, Mary Russell and Sherlock Holmes are as dubious as they are reluctant. But a young girl is involved, and a beautiful queen. Surely it won’t take long to shine light on this unlikely case of what would seem to be strigoi?

An excerpt from Castle Shade

I ripped myself from the fever-dream somewhere west of Ljubliana.

My face was pressed up to a window, as it had been in the dream. Outside was the same mist-soaked night, the same eerie glow of a full moon.

I jerked upright and thrust out my hands, turning them over, back and front—but even in the near-dark, I could see they were perfectly clean. There were no red and dripping stains gloving the skin.

And no wolves, I thought, chasing after the smell of blood on my hands. The pack’s vivid howls merged into the distant rise and fall of a passing train’s whistle, while my horse-drawn carriage and its sinister driver became, reluctantly, an aged train compartment behind a steam-powered engine.

I shuddered to rid myself of the macabre sensations, then pulled the thin blanket back up around my shoulders, coughing as I patted around for my glasses. With them on my nose, menace retreated a step. Only a nightmare. Wolves and a carriage, triggered by our destination. The blood, though . . . ​I’d had the blood of two different dead men on my hands, these past months. Perhaps I should have anticipated the psychic toll.

I wiped ineffectually at the cracked window, trying to see where we were. Not a mysterious forest, thank goodness, but a railway station, with one dim light shining through the decorative iron braces of the platform roof. Silent and deserted.

How long had I been here? For that matter, where was here? My memories weren’t entirely gone—I knew what that felt like—just . . . ​slow. Like pulling a boot from deep mud. Let me see: we had boarded the train in the Côte d’Azur. And we were headed to Roumania. The last station-marker I’d noticed was—Padua?

None of which helped much. I squinted at the rusty and ill-lit metal sign, decided that I had assembled as much information as I could without outside resources, tossed back the travelling rug—and only then realised that I was not alone in the compartment.

“Holmes, what are you—” I began, then dissolved into a fit of coughing, followed by an enormous sneeze. That knocked loose a recollection: the Murphy children, back in France, hacking and snuffling in all directions. “Sorry, I seem to have picked up a head-cold. And I think a fever—I had the most vivid dream, that I was in Jonathan Harker’s coach at the start of Dracula. All the evil things in the world will have full sway—sorry, I’m babbling. But why are you sitting there in the dark? And where on earth are we? I can’t even tell what language that sign is.” Surely Italian didn’t have that pepper-pot sprinkling of accents and subscript marks?

He stirred in his dark corner. His feet came down from the seat, his features coming into view as he leaned forward to look out of the window. “I believe that is Slovenian,” he said, then retreated back into the shadows.

Slovenia. Edge of the Balkans, south of . . . ​everywhere. Next to Italy?

I sneezed again. This time his arm stretched out, offering a clean handkerchief. Sherlock Holmes always had a clean handkerchief. I used it, and again the pressure on my sinuses knocked forth a couple of ideas. First, that any question Holmes did not answer was generally more important than the one he did, and second, the fog I was looking through was not all on the outside.

“Good Lord, Holmes, are you trying to suffocate us?” I stood to wrestle with the window latch, no more able to smell the air than I could read the sign outside, but knowing that at least some of my dizziness was due to the dense smoke in my lungs. Heaven only knew how long he had been sitting there in the dark, mulling over some conundrum. By the looks of the compartment’s atmosphere, it had been quite a five-pipe problem.

The stuff that billowed out into the night was thick enough to summon the fire services. I dropped onto my seat, coughing now with fresh air rather than stale fug.

With an exaggerated show of patience, Holmes put down his pipe and picked up the Italian newspaper from the seat beside him. He crossed his legs and switched on a reading lamp, to disappear behind the pages.

When the coughing spate passed, I tried again. “Slovenia is some way from Bucharest.”

My husband and partner muttered something under his breath. The exiting air had ceased to look like a chimney, so I closed the window somewhat, scowled at the station-name that might have been spillage from a typesetter’s tray, then turned on my companion a glare strong enough to burn a hole in the pages he was pretending to read. He raised the paper a little.

“How long have we been sitting here?” Another mutter. “How long?”

He gave up, folding the newspaper noisily into something resembling a rectangle, and took out his watch. “Not quite three hours.”

During which time he had not been stirring up alternate transport or threatening the engineer with bodily harm, but instead, silently poisoning us both with nicotine.

I recognised the signs. To find him curled in a corner with his filthy old pipe and a handful of the very cheapest tobacco meant he was searching for connections between a series of apparently unrelated facts. As Dr Watson said, Holmes had a positive genius for minutiae—dogs that stayed silent, dried pips from an orange. Many of his cases started with some tiny event that the rest of humanity would not even notice.

A pipe-fuelled rumination explained why he had been sitting there, oblivious to the world. However, in my current state, there was little point asking what he was working on. I would never be able to follow his thoughts without stimulation of my own.

“What are the chances of getting some tea?”

“Very slim. We left the dining car behind in Trieste.”

“Trieste?” I laboriously summoned a mental image of Europe, drawing a line between where we had started and where I’d thought we were going. Granted, I’d been both busy and distracted in the Riviera, where several much-interrupted nights (and, I suspected now, a low-grade fever) caused my brain to shut down within minutes of boarding the train. That same mental state, come to think of it, had led me to follow Holmes blindly in the first place, without questioning the details of his travel plans. Never a wise thing to do.

“Holmes, why the devil are we—never mind. Where’s the Bradshaw’s?”

“Our Bradshaw’s Guide appears to be somewhat out of date. Hence the siding upon which we sit.” He handed me a book that looked as if it had walked from Paris on its own.

“Holmes, this was published before the War.”

“I was assured that little had changed in this part of the Continent.”

“You were duped,” I said brutally. I dropped the thick volume onto the seat, causing several pages to shoot to the floor. When I stood, stretching my cramped limbs, I could feel the rawness in my throat and the ache in my bones.

Children: such a gift.

The passageway was dark, lit by bulbs of tiny wattage at both ends. I set off down it, glancing into the other compartments, but the train seemed as deserted as the station. Two cars back, I became aware of a noise, and followed it to the train’s last car. The snores of a uniformed attendant were causing the windows to rattle. Until I walked over and kicked his feet from their rest.

He fell to the floor, snorting himself awake, then leapt upright when he beheld me looming over him. “Madam! Yes! May I be of service?” He straightened his tie and looked surreptitiously around for his shoes.

The answer required his cap, but that, once firmly squared on his blunt head, seemed to bring a degree of professional memory. “Madam is going to Bucharest, is she not?”

“Madam is clearly going nowhere at the moment, and I can’t see why I should visit every tiny village in Eastern Europe on the way. Getting out of . . .” I waved towards the unpronounceable sign outside. “. . . here, in any direction will give us more of a chance of actual progress than waiting for the tides to wash us to the north-east.”

He blinked in incomprehension, and bent to retrieve the footwear he had spotted under the table.

I sighed. “Do you have a Bradshaw’s? Or any train schedule?”

The one he had was in German, but it was only three years out of date, rather than Holmes’ fifteen. I pored over it, trying to locate a string of letters approximating those on the sign outside. I found one at last, followed its listings along the page, then consulted the clock on his wall.

“We are here?” I asked. He bent to study the name above my finger.

“Yes, Madam,” he said, following that with a noise like an aged coal miner clearing his throat. I took a sharp step back, then decided he’d been pronouncing the village name.

“And this train, going west, will pass here at three-fifteen? This is Tuesday, right? And not a second or fourth Tuesday?” There did not seem to be any other tiny-print rubrics in the train schedule—assuming it was still August, and I hadn’t been in a Sleeping Beauty coma on the cramped leather seat.

He looked at the calendar under the clock, his lips moving as he worked on the complicated matter of the day of the week, then nodded. “Yes, Madam.”

Now the big question: “Can you get that train to stop?” 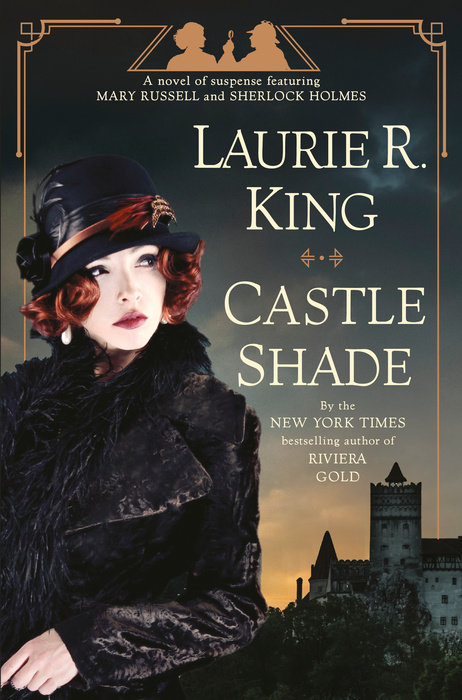