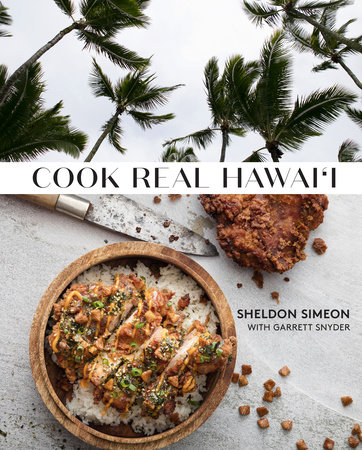 Through stunning photography, poignant stories, and dishes like wok-fried poke, pork dumplings made with biscuit dough, crispy cauliflower katsu, and charred huli-huli chicken slicked with a sweet-savory butter glaze, Cook Real Hawai‘i will bring a true taste of the cookouts, homes, and iconic mom and pop shops of Hawai‘i into your kitchen.
Read more
Close

“An incredible primer on the delights of Hawai‘i’s food, and a heartfelt portrait of Simeon’s own family history there.”—Eater, “The 17 Best Cookbooks of Spring 2021”
Read more
Close

Sheldon Simeon is the chef and owner of Lineage, a restaurant that explores the ancestral roots of Hawaiian cuisine, as well as Tin Roof, where he serves contemporary Hawaiian dishes in a casual setting, both in Maui. In 2019, Lineage was named one of Bon Appétit's Top 50 Nominees for America's Best New Restaurants. Sheldon was a finalist on Season 10 of Top Chef: Seattle, becoming a finalist en route, and later competed on Season 14 of Top Chef: Charleston. He was voted Fan Favorite on both seasons. More by Sheldon Simeon

Sheldon Simeon is the chef and owner of Lineage, a restaurant that explores the ancestral roots of Hawaiian cuisine, as well as Tin Roof, where he serves contemporary Hawaiian dishes in a casual setting, both in Maui. In 2019, Lineage was named one of Bon Appétit's Top 50 Nominees for America's Best New Restaurants. Sheldon was a finalist on Season 10 of Top Chef: Seattle, becoming a finalist en route, and later competed on Season 14 of Top Chef: Charleston. He was voted Fan Favorite on both seasons. More by Garrett Snyder