NEW YORK TIMES BESTSELLER • This sweeping novel from the author of A Long Petal of the Sea tells the epic story of Violeta Del Valle, a woman whose life spans one hundred years and bears witness to the greatest upheavals of the twentieth century.

“An immersive saga about a passion-filled life.”—People

ONE OF THE BEST BOOKS OF THE YEAR: PopSugar, Real Simple, Reader’s Digest

Violeta comes into the world on a stormy day in 1920, the first girl in a family with five boisterous sons. From the start, her life is marked by extraordinary events, for the ripples of the Great War are still being felt, even as the Spanish flu arrives on the shores of her South American homeland almost at the moment of her birth.

Through her father’s prescience, the family will come through that crisis unscathed, only to face a new one as the Great Depression transforms the genteel city life she has known. Her family loses everything and is forced to retreat to a wild and beautiful but remote part of the country. There, she will come of age, and her first suitor will come calling.

She tells her story in the form of a letter to someone she loves above all others, recounting times of devastating heartbreak and passionate affairs, poverty and wealth, terrible loss and immense joy. Her life is shaped by some of the most important events of history: the fight for women’s rights, the rise and fall of tyrants, and ultimately not one, but two pandemics.

Through the eyes of a woman whose unforgettable passion, determination, and sense of humor carry her through a lifetime of upheaval, Isabel Allende once more brings us an epic that is both fiercely inspiring and deeply emotional.

An excerpt from Violeta [English Edition]

I came into the world one stormy Friday in 1920, the year of the scourge. The evening of my birth the electricity went out, something that often happened during storms, so they lit candles and kerosene lamps, which were always kept on hand for these types of emergencies. María Gracia, my mother, began to feel the contractions—a sensation she knew well since she’d already birthed five sons—and she surrendered to the pain, resigned to bringing another male into the world with the help of her sisters, who had assisted her through the difficult process several times. The family doctor had been working tirelessly for weeks in one of the field hospitals and she felt it imprudent to call him for something as prosaic as childbirth. On previous occasions they had used a midwife, always the same one, but the woman had been among the first to fall victim to the flu and they didn’t know of anyone else.

To my mother it seemed she’d spent the entirety of her adult life either pregnant, recovering from childbirth, or convalescing after a miscarriage. Her oldest son, José Antonio, had turned seventeen, she was sure of that, because he had been born the same year as one of our worst earthquakes, which knocked half the country to the ground and left thousands of deaths in its wake. But she could never precisely recall the ages of her other sons nor how many pregnancies she’d failed to carry to term. Each miscarriage had left her incapacitated for months and after each birth she’d felt exhausted and melancholic for a long while. Before getting married she had been the most beautiful debutante in the capital—slender, with an unforgettable face, green eyes, and translucent skin—but the extremes of motherhood had distorted her body and drained her spirit.

She loved her sons, in theory, but in practice she preferred to keep them at a comfortable distance. The exuberant band of boys was as disruptive as a battle in her peaceful feminine realm. She’d once admitted during confession that she felt doomed to bear only sons, like a curse from the Devil. In penitence she was ordered to recite a rosary every day for two years straight and to make a sizable donation to the church renovation fund. Her husband forbade her from returning to confession.

Under my aunt Pilar’s direction, Torito, the boy we employed for a wide range of chores, climbed a ladder to hang a labor sling from two steel hooks that he himself had installed in the ceiling. My mother, kneeling in her nightdress, each hand pulling at a strap, pushed for what felt like an eternity, cursing like a pirate, using words she’d never utter under normal circumstances. My aunt Pía, crouched between her legs, waited to receive the newborn baby before he could fall to the floor. She had already prepared the infusions of nettle, artemisia, and rue for after the birth. The clamor of the storm, which beat against the shutters and ripped tiles from the roof, drowned out the low moans and then the long final scream as I began to emerge, first a head, followed by a body covered in mucus and blood, slipping through my aunt’s fingers and crashing down onto the wood floor.

“You’re so clumsy, Pía!” Pilar shouted, holding me up by one foot. “It’s a girl!” she added, surprised.

“It can’t be, check him good,” my mother mumbled, exhausted.

“I’m telling you, sister, she doesn’t have a willy,” Pilar responded.

That night, my father returned home late, after dinner and several hands of cards at the club, and went directly to his room to change his clothes and rub himself down with alcohol as a precautionary measure before greeting his family. He ordered a glass of cognac from the housekeeper on shift, who didn’t think to give him the news because she wasn’t accustomed to speaking to the boss, and then he went to say hello to his wife. The rusty smell of blood warned him of what had occurred before he’d even crossed the threshold. He found his wife in bed, flushed, her hair damp with sweat, wearing a clean nightdress, resting. They’d already removed the straps from the ceiling and the buckets of soiled rags.

“Why didn’t anyone tell me!” he exclaimed after kissing his wife on the forehead.

“How could we have? The driver was with you and none of us were going out on foot in that storm, assuming your henchmen would even let us,” Pilar responded coldly.

“It’s a girl, Arsenio. You finally have a daughter,” Pía interrupted, showing him the bundle she held in her arms.

“Thank God!” my father muttered, but his smile faded as he saw the creature peeking out from the folds of the blanket. “She has a lump on her forehead!”

“Don’t worry. Some babies are born that way. It goes down after a few days. It’s a sign of intelligence,” Pilar improvised.

“What are you going to name her?” Pía asked.

“Violeta,” my mother said firmly, without giving her husband a chance to chime in.

It was the name of our illustrious great-grandmother who had embroidered the shield of the first flag after independence, in the 1800s.

The pandemic had not taken my family by surprise. As soon as word spread about the dying people in the streets near the port and the alarming number of blue corpses in the morgue, my father, Arsenio Del Valle, calculated that the plague would not take more than a few days to reach the capital, but he did not lose his calm. He had prepared for this eventuality with the efficiency he applied to his business. He was the only one of his brothers on track to recover the prestige and wealth that my grandfather had inherited but lost over the years because he’d had too many children and because he was an honest man. Of my grandfather’s fifteen children, eleven survived, a considerable number that proved the heartiness of the Del Valle bloodline, as my father liked to brag. But such a large family took a lot of effort and money to maintain, and the fortune had dwindled.

Before the national press ever called the illness by its name, my father already knew that it was the Spanish flu. He kept up to date on the news of the world through foreign newspapers, which arrived with considerable delay to the Union Club but provided better information than the local papers, and via a radio he had built himself, by following the instructions in a manual, to keep in touch with other enthusiasts. And so, punctuated by the static and shrieks of the shortwave, he learned of the havoc wreaked by the pandemic in other places. He had followed the advance of the virus from the beginning, and he knew how it had blown through Europe and the United States like a deadly breeze. He deduced that if civilized countries had experienced such tragic consequences we should expect worse in ours, where resources were more limited.

The Spanish influenza, “the flu” for short, reached us after almost two years’ delay. According to the scientific community, we’d be spared infection entirely due to our geographic isolation, the natural barrier afforded by the mountains to one side and the ocean to the other, as well as our remoteness. Popular opinion, however, attributed our salvation to Father Juan Quiroga, in whose honor precautionary processions were held. Quiroga is the only saint worth worshipping, because no one can outdo him when it comes to domestic miracles, even if the Vatican has failed to canonize him. Nevertheless, in 1920 the virus arrived in all its majestic glory with more force than anyone could have imagined, toppling the notions of scientists and theologians alike.

The onset of illness brought first a terrible chill from beyond the grave, which nothing could quell, followed by fevered shivering, a pounding headache, a blazing fire behind the eyes and in the throat, and deliriums, with terrifying hallucinations of death clurking steps away. The person’s skin turned a purplish blue color that soon darkened until the feet and hands were black; a cough impeded breathing as a bloody foam flooded the lungs, the victim moaned and writhed in agony, and the end arrived by asphyxiation. The most fortunate ones were dead in just a few hours.

My father suspected, on good grounds, that the flu had reaped a greater death toll among the soldiers in Europe, huddled in the trenches with no way to mitigate the spread, than the bullets and mustard gas had. It ravaged the United States and Mexico with equal ferocity and then turned toward South America. The newspapers said that in other countries the bodies were piled up like cordwood along the streets because there was not enough time or cemetery space to bury them all, that a third of humanity was infected, and that there were more than fifty million victims. The reports were as contradictory as the terrifying rumors that circulated. It had been eighteen months since the armistice had been signed, putting an end to the four horrific years of the Great War in Europe. But the full scope of the pandemic, which military censorship had covered up, was only just starting to be understood. No nation had wanted to report the true number of deaths. Only Spain, who had remained neutral in the conflict, shared news of the illness, which is why it ended up being called the Spanish influenza.

Born in Peru and raised in Chile, Isabel Allende is the author of a number of bestselling and critically acclaimed books, including Violeta, A Long Petal of the Sea, The House of the Spirits, Of Love and Shadows, Eva Luna, and Paula. Her books have been translated into more than forty-two languages and have sold more than seventy-four million copies worldwide. She lives in California. 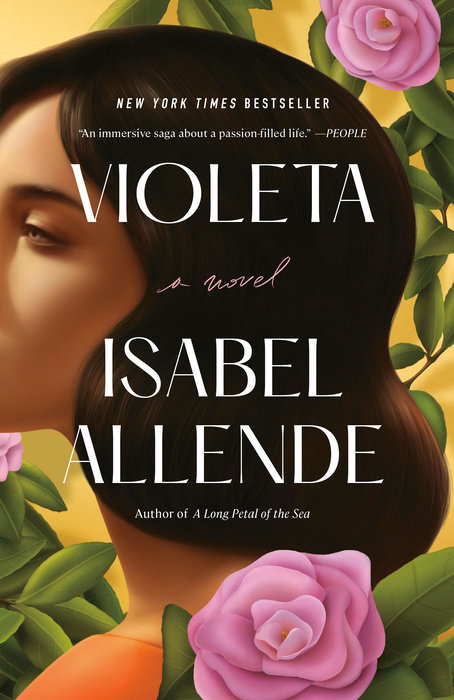