The acclaimed chef behind the Michelin-starred Mister Jiu’s restaurant shares the past, present, and future of Chinese cooking in America through 90 mouthwatering recipes.

“Brandon Jew’s affection for San Francisco’s Chinatown and his own Chinese heritage is palpable in this cookbook, which is both a recipe collection and a portrait of a district rich in history.”—Fuchsia Dunlop, James Beard Award-winning author of The Food of Sichuan

Brandon Jew trained in the kitchens of California cuisine pioneers and Michelin-starred Italian institutions before finding his way back to Chinatown and the food of his childhood. Through deeply personal recipes and stories about the neighborhood that often inspires them, this groundbreaking cookbook is an intimate account of how Chinese food became American food and the making of a Chinese American chef.

Jew takes inspiration from classic Chinatown recipes to create innovative spins like Sizzling Rice Soup, Squid Ink Wontons, Orange Chicken Wings, Liberty Roast Duck, Mushroom Mu Shu, and Banana Black Sesame Pie. From the fundamentals of Chinese cooking to master class recipes, he interweaves recipes and techniques with stories about their origins in Chinatown and in his own family history. And he connects his classical training and American roots to Chinese traditions in chapters celebrating dim sum, dumplings, and banquet-style parties.

With more than a hundred photographs of finished dishes as well as moving and evocative atmospheric shots of Chinatown, this book is also an intimate portrait—a look down the alleyways, above the tourist shops, and into the kitchens—of the neighborhood that changed the flavor of America.

An excerpt from Mister Jiu's in Chinatown

Chinatown is just waking up. On Waverly Place, aunties stroll past the colorful facades lining the two-block alley to burn incense at the temple that has served this neighborhood for more than one hundred seventy years. Here, in San Francisco, in the oldest Chinatown in North America, things move on a longer timeline.

I’m meeting Betty Louie, a landlord with a restaurant space—28 Waverly. Only two businesses have stood on this spot. The first was Hang Far Low, which, for decades, beginning in the 1850s, was the city’s grandest restaurant. Nearly a century later, this space reopened as the opulent Four Seas. Now, in 2013, the Lim family is beat. They’re ready to pass on all 10,000 square feet.

For a kid who trailed his grandma through the markets and did gung fu in the Chinese New Year parade, this building should be legend. But the neglected entrance doesn’t look familiar. The dark-red staircase, covered in worn carpeting, is lined with faded photos of past guests—politicians, Chinese dignitaries, and celebrities; near the top, a grinning Vince Vaughn.

Inside, we’re greeted by silence. The long, mirrored bar is empty. The dining room too. The signs of life are outside. Out the balcony doors, across the street, pork belly hangs to cure on a fire escape, set against flapping laundry and the tip of the Transamerica Pyramid. The shops on the main streets threaded with red lanterns and gilt are welcoming their first tourists.

The kitchen is missing all the proper sounds, just the drip of faucets over a long wok station. But a cook is hanging his life’s work in the kitchen’s picture window: a row of beautifully lacquered roast ducks. They are a culinary feat; air pumped between the skin and fat, a boiling water bath, followed by days of continuous basting until they are roasted to a gleaming mahogany. How many lifetimes, centuries ago, did it take for cooks to perfect the process?

There’s more, Betty says, pointing up. I follow her upstairs to a massive banquet hall. Everything in it is a throwback. There are murals on the walls, a stage, a parquet dance floor, and golden lotus chandeliers. There’s the lingering aroma of celebration—cognac and firecrackers. That’s when I remember; I’ve been here.

My uncle celebrated his wedding with a massive banquet in this room. A legion of staff in black-and-white tended to three hundred guests. Here stands the site of countless red-egg parties for new babies, New Year’s feasts, and families catching up over Sunday afternoon dim sum. Everyone connected to the Chinese American community celebrated something here.

But, then, the parties dwindled. A new generation grew up with a taste for quick meals and take-out from other parts of the city, like the Richmond and the Sunset Districts, and from the suburbs. The walls were held up by so much joy, so many memories. The space was too big. It would take so much work to get it back into shape. But I knew I couldn’t turn my back on this place.

I didn’t understand that I had to open Mister Jiu’s until Ying Ying (人人)—our name for our paternal grandmother in Toisanese—was diagnosed with cancer. She was, at seventy-nine years old, the athletic, hilarious, strong-willed matriarch of our family. I was twenty-six and cooking on the line at Quince, a legendary restaurant in San Francisco, executing perfect Ricotta Sformato with artichokes, radicchio, and Umbrian lentil vinaigrette. I loved my job. I loved to work. I had not taken a vacation in what seemed like years. But my Ying Ying was dying, and with her a history in recipes and love. Ying Ying was our family’s head cook. She and I spoke the same language: heat, time, taste. But Ying Ying’s noh mái gāi was a long way from Ricotta Sformato. Which meant every day at work in the kitchen, I was a long way from home.

I had spent a solid chunk of my childhood in Ying Ying’s kitchen in the Richmond. She would cook the northern Chinese food of her childhood and the southern Chinese food of my grandfather’s, and I would clean my plate; then she would refill my plate and praise me for being a good, big-boned boy. I did not tire of it. I had grown up speaking English but my culinary language was Chinese.

On her table would be pickled radish, dried shrimp, and slivers of tofu skin on glass noodles. Platters of dumplings, whole steamed bass, or stir-fried crabs served as mains. Her jīn dēui were extraordinarily light puffs of sticky rice dough stuffed with red bean paste. Her noh m.i gāi was a treasure of savory chicken and sweet sticky rice to be unearthed from within a parcel of fragrant lotus leaves. The depth of her cooking knowledge was immense.

My parents moved us—my big sister, little brother, and me—thirty minutes south of the city when I was in middle school, so going to Ying Ying’s on the weekends also meant going back to San Francisco. That was a major perk. I loved the city, especially Ying Ying’s version of it. When she needed ingredients, she took me shopping. I imagined Chinatown was just like China—red and gold everywhere, with dragons on streetlights.

On special occasions, when the whole family gathered at Ying Ying’s—the Toisan relatives (my dad’s side) and the Zhongshan relatives (mom’s side)—we had two Chinese dialects plus English flying across the table. On those nights, in addition to all the Cantonese fare, we might also see a well-seared steak for Yeh Yeh (爺爺), my paternal grandfather, a paper son, World War II and Korean War veteran, and man of few words. Yeh Yeh loved radios and all-you-can-eat buffets. My dad also had a taste for American standards. We were a household that swung easily between meatloaf and h.ahm y., fermented salted fish. And, always, there was Ying Ying in the kitchen in the middle of everything. Even when we could not come to her, she came to us, braving the trek to the suburbs. While Yeh Yeh hunted for thrift-store treasure in downtown San Carlos, Ying Ying would wait outside our school to walk us home—where she would feed us the necessary after-school snacks. No detail was lost on her, if it was food related. When I was cooking at Quince, Ying Ying would often show up at the one window to the kitchen, just to wave hello.

Ying Ying cooked by memory, taste, and feel. Nothing was written down. She lived for only a few days after I learned she was sick. Her death marked a crossroads in my life and career. I’d climbed the rungs in the fine-dining world and was proud of my accomplishments; but suddenly, mastery of the Art Culinaire mattered less to me than the mysteries of Ying Ying and her kitchen. I quit thinking of ways to reimagine risotto and instead concentrated on combinations of jook. I put down books by Michel Bras and Alain Ducasse and picked up those of Grace Young, Ken Hom, Barbara Tropp, Irene Kuo, Rhoda Yee, Susur Lee, Florence Lin, and Eileen Yin-Fei Lo.

I went deep, fast—reading my way back to the Chinese food my grandmother had mastered, and even regional styles I’d never tried. I read for pleasure late at night, through weekends, and even at the beach. I started practicing recipes as if I was running controlled experiments. So many cookbook recipes were rough approximations. I’d spend days at a stretch trying to read between the lines. I’d re-create the dishes from our family dinners; like noh mái gāi, the chicken and sticky rice in lotus leaf. Instead of the lean chicken that my grandmother had used, I tried different birds, like fatty duck confited with orange zest. Instead of dried scallops to flavor the rice, I smoked fresh scallops and dried them in my oven. I was cooking from flavor memories and bringing the skills that I’d learned in professional kitchens to make something new but still rooted in my past. Then the day came when I knew I needed to go to China. I gave notice at Quince and bought a one-way ticket to Shanghai.

Picking up a wok instead of a sauté pan wasn’t a small adjustment. I’d apprenticed in Piedmont and Bologna in Italy, where monuments to food described the exact width and length of a region’s beloved pasta. After Italy, I’d worked for a pair of geniuses back in the Bay Area; Judy Rodgers at Zuni, first, and then Michael Tusk at Quince. Judy was in the kitchen every day, tasting all the mise en place and examining the orders that were being dropped off from farmers. Judy set the menu, put me in front of a wood-fired oven, and taught me to turn up all my senses (even as I was sweating like crazy). Michael showed me how to create dishes around ingredients as we collaborated on the day’s menu. I’d pester him with why’s, and he’d humor my empirical brain. I’d dedicated my entire career up to this point to variations of classical and California-style Italian and Mediterranean cuisine. Chinese cuisine shared many of the same techniques and philosophies, but it had its own as well—beginning with the way you stood and the way you held your knife. There was a lot to learn.

But then Ying Ying. Some things just matter most.

I looked to China for culinary answers and to connect ancestral dots. But I arrived and discovered quickly it would not be the trip I’d planned. I was neither obviously American nor clearly Chinese. Taxi drivers loved guessing where I was from, and they thought I was Korean, Japanese, Mexican, and everything but what I was. The first big stage I sought out fell through, but I stayed in Shanghai anyway, accepting kitchen gigs that afforded me time for Mandarin lessons and eating everything everywhere.

Brandon Jew (周英卓) is a native San Franciscan and the chef and co-owner with Anna Lee (the Missus) of Mister Jiu’s, a Chinese American restaurant in the heart of North America’s oldest Chinatown.

Tienlon Ho (何天蘭) is a writer originally from Columbus, Ohio, where the best Chinese food was always in her family’s kitchen. She lives with Jon and Quin in San Francisco. 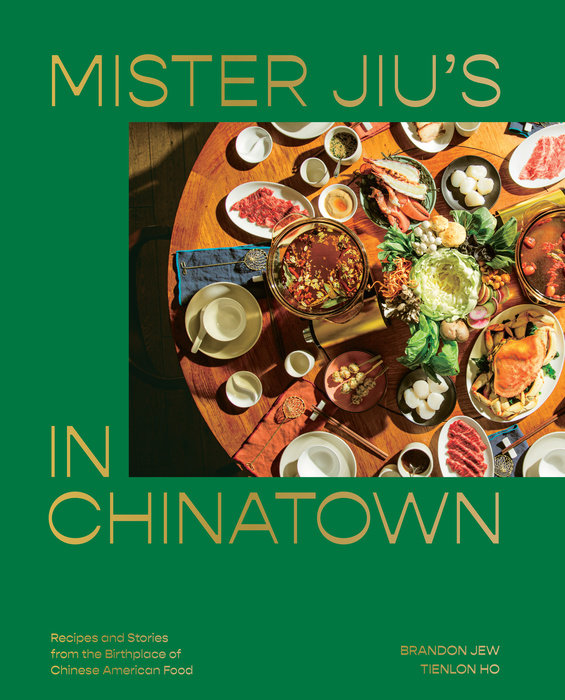