A woman returns to her small southern hometown in the wake of her mother’s sudden death—only to find the past upended by stunning family secrets—in this intimate debut novel, written with deep compassion and sharp wit.

“A deeply moving work of Southern fiction that will appeal to fans of Where the Crawdads Sing . . . a story to remember long after the last page is turned.”—Susan Wiggs, #1 New York Times bestselling author of The Lost and Found Bookshop

Lila Bruce Breedlove never quite felt at home in Wesleyan, Georgia, especially after her father’s untimely demise when she was a child. Both Lila and her brother, Henry, fled north after high school, establishing fulfilling lives of their own. In contrast, their younger sister, Abigail, opted to remain behind to dote on their domineering, larger-than-life mother, Geneva. Yet despite their independence, Lila and Henry know deep down that they’ve never quite reckoned with their upbringing.

When their elderly mother dies suddenly and suspiciously in the muscadine arbor behind the family estate, Lila and Henry return to the town that essentially raised them. But as they uncover more about Geneva’s death, shocking truths are revealed that overturn the family’s history as they know it, sending the pair on an extraordinary journey to chase a truth that will dramatically alter the course of their lives. The Sweet Taste of Muscadines reminds us all that true love never dies.

An excerpt from The Sweet Taste of Muscadines

As a child I was afraid of tornadoes. Actually, “afraid” is a puny word to describe how I felt when an unusual stillness would thread the air of a late-­spring afternoon, weaving a blanket of quiet that silenced birdsong and suspended the breeze. The skies over Wesleyan would darken to horror green, and the wind would awaken with the soul of a dervish, causing the pines and poplars to wring themselves into fraying, flailing knots. Though meant for good, the sound of the tornado siren was as welcome as a scream. As the witchy webs of lace curtains reached out for me in the wind, I would run through the house in blind panic, grabbing up my diaries and favorite photos, all the books I could carry, all the while herding a grumbling Henry before me like a wayward sheep. Into our dark rabbit hole of a cellar I would vanish like Alice to wait it out, nervous and shaking, while in my mind’s eye I could clearly see the swirling evil coming right down my street, like the dark finger of God, casually tracing a line on the earth. The world was always unchanged when I reemerged, and the next hour or so was spent putting back the treasured items I’d saved from threatened obliteration while enduring the teasing of my family for my oversize, misplaced fear. Then came the afternoon of Lolly Carmichael’s seventh-­birthday party.

Any party at the Carmichaels’ was a dress-­up affair, even seventh-­birthday ones, so I found myself sitting in the back of our family’s green Pontiac in a pink, full-­skirted dress with my feet trapped in black patent shoes, riding to the event in a sulk, on a beautiful day in May. As we neared Lolly’s house, I felt a bit vindicated when I spied dark clouds rolling in, threatening rain. At least we wouldn’t have to endure outside games trussed up in these clothes. But my glee was waning as we pulled up the drive to a giant’s footfall of thunder. Egg-­size drops of rain spattered my pink shoulders as I ran up the stairs, my beribboned present tucked underneath my arm. The front door flew open, and Mrs. Carmichael, face white-­tight, called past me to my mother.

“Geneva! Get in here! There’s a tornado!”

My worst fear in the world, and I was away from home in a pink dress. Mama ran inside, and we scrambled to join the rest of the party all huddled together in the center of the family room, away from the windows. A rainbow of balloons floated near the ceiling, a big number 7 written on each one in gold. A stack of presents teetered on the dining-­room table, pink punch waveless in a cut-­glass bowl. The tornado siren blared just then, sending shivers up our bare legs and causing Mary Ann Archer’s mother to blurt out, “Oh, Jesus!” in a voice as shrill as the siren itself.

“Hush up, Jessie,” my mother hissed.

Just then, as one, every balloon in the room popped, a sound that shattered our stoicism and uncorked Jessie Archer’s full-­throated pleas to the heavens. We scattered like frilly buckshot into every nook and cranny of that house. I grabbed Lolly, who’d frozen to the spot, wailing, and made for the basement along with the more sensible members of the crowd, my mother included. We left Mrs. Archer standing right in front of the window, hands raised in either terror or supplication, I never knew which.

If you stick a microphone in the face of someone who’s been through a tornado, you can bet money they’ll say the familiar line, “It sounded like a freight train.” It almost seems a scripted description. But I can empirically say there’s a reason for that. From my hiding place that afternoon in Lolly Carmichael’s basement, that is precisely the sound I heard as I sat with my head down and my hands clasped around my knees as though bound to a railroad track with no hope of escape. I could hear it coming, hear it hit like a battering ram, hear it continue on, leaving the Carmichael house totally, eerily silent as we waited to breathe again.

Mama was the first one back up the stairs. Throwing open the basement door, she gasped when she saw the trunk of a tree sticking like a tongue depressor through the gaping mouth of the living-­room wall. The air smelled sickly strong of pine, and looking up, I could see a nonchalant blue sky already pushing the darkness away to the east.

We found Mrs. Archer sprawled across the hooked rug of the family room, her right leg twisted behind her like a strand of spaghetti, her hands still raised to the ceiling, loudly praising God for her salvation, to which Mama replied as she picked up the phone to call for help, “God nothing, Jessie. If you’d been listening to God, you’d have been downstairs with the rest of us with not even a run in your stocking.” Mrs. Archer had a slight limp for the rest of her days.

Maybe once you’ve faced down something so frightening, it loses its power over you. I’ve never been afraid of tornadoes again. And my reaction to the news of my mother’s death this morning was not as dramatic as it probably should have been. After all, at eight years old I’d spent an endless afternoon believing her dead. I’d already experienced the shock, the hideous fascination, of her passing. The fact that her death had ended up false didn’t lessen all I’d felt that day. Those same feelings now returned to meet Abigail’s news, squeezing themselves through telephone wires to grab me around the throat, but being somewhat familiar, their power was lessened. So I didn’t sway; I didn’t gasp. Instead I asked Abby for the answer to what was, for me at least, the strangest part of the story. What on earth was my mother doing out in the muscadine arbor? In rapid-­fire fashion, Abby told me that’s exactly what she wanted to know. She delivered her account with an urgency undiluted by the drawl of her words, which shot through the phone like honey-­coated bullets.

“I don’t have a clue, Lila. I mean, I thought at first maybe she’d gotten hot and stepped outside to get some fresh air. It’s been pretty sticky, though there was a nice breeze last night. But Lord, that air conditioner was running full blast when I got here this morning, so I know she couldn’t have been hot. It was cold as a meat locker in this house. And I swear, I don’t even know if her bed’s been slept in. I mean, it’s hard to tell, ’cause she won’t make it up every day anymore. Not unless Jackie’s coming over to clean. You know how Mama never wants anybody, not even her cleaning lady, to think she needs a cleaning lady, so she always straightens things up before Jackie gets here. They said she’d been dead for about four hours, which means it had to have happened around two in the morning, ’cause I got here at six. I called her before I went to bed to remind her about her hair appointment at eight—­she likes to get it done real early so the heat won’t make it fall before she gets back home—­and to tell her I’d be picking her up at the crack of dawn so we could have breakfast out like usual. You know how she loves to eat breakfast out.”

“Yes. What happened, Abby?” I was trying to hurry this story along even though I knew I hadn’t a hope of succeeding.

“Well. Everything seemed fine on the phone. She sounded a little peevish, but I’d interrupted a rerun of that John Wayne movie she likes so much, so I figured that was why. You know, the one where he’s out looking for that little girl the whole time and when he finds her, she turns out to be an Indian? So anyway, I drove on over this morning real early so we could go to the Pancake Parlor like she likes to. The coffee wasn’t on, and the house was as quiet as the grave. Sorry. Wrong choice of words. I’m still upset. Well, you can imagine.”

A lifelong Southerner, Pamela Terry learned the power of storytelling at a very early age. For the past decade, Terry has been the author of the internationally popular blog From the House of Edward, which was named one of the top ten home blogs of the year by London's The Telegraph. She lives in Smyrna, Georgia, with her songwriter husband, Pat, and their three dogs, Apple, Andrew, and George. She travels to the Scottish Highlands as frequently as possible and is currently at work on her second novel. 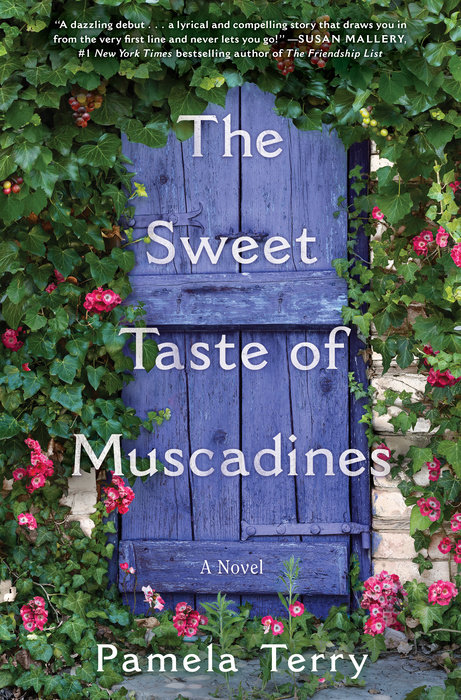