The classic adventure that started it all

Luke Skywalker lived and worked on his uncle's farm on the remote planet of Tatooine—and he was bored beyond belief. He yearned for adventures out among the stars, adventures that would take him beyond the farthest galaxies to distant and alien worlds.

But Luke gets more than he bargained for when he intercepts a cryptic message from a beautiful princess held captive by a dark and powerful warlord. Luke doesn't know who she is, but he knows he has to save her—and soon, because time is running out.

Armed only with courage and with the lightsaber that had been his father's, Luke is catapulted into the middle of the most savage space war ever—and headed straight for a desperate encounter on the enemy battle station known as the Death Star. . . .

An excerpt from A New Hope: Star Wars: Episode IV

IT was a vast, shining globe and it cast a light of lambent topaz into space—but it was not a sun. Thus, the planet had fooled men for a long time. Not until entering close orbit around it did its discoverers realize that this was a world in a binary system and not a third sun itself.

At first it seemed certain nothing could exist on such a planet, least of all humans. Yet both massive G1 and G2 stars orbited a common center with peculiar regularity, and Tatooine circled them far enough out to permit the development of a rather stable, if exquisitely hot, climate. Mostly this was a dry desert of a world, whose unusual starlike yellow glow was the result of double sunlight striking sodium-rich sands and flats. That same sunlight suddenly shone on the thin skin of a metallic shape falling crazily toward the atmosphere.

The erratic course the galactic cruiser was traveling was intentional, not the product of injury but of a desperate desire to avoid it. Long streaks of intense energy slid close past its hull, a multihued storm of destruction like a school of rainbow remoras fighting to attach themselves to a larger, unwilling host.

One of those probing, questing beams succeeded in touching the fleeing ship, striking its principal solar fin. Gemlike fragments of metal and plastic erupted into space as the end of the fin disintegrated. The vessel seemed to shudder.

The source of those multiple energy beams suddenly hove into view—a lumbering Imperial cruiser, its massive outline bristling cactuslike with dozens of heavy weapons emplacements. Light ceased arching from those spines now as the cruiser moved in close. Intermittent explosions and flashes of light could be seen in those portions of the smaller ship which had taken hits. In the absolute cold of space, the cruiser snuggled up alongside its wounded prey.

Another distant explosion shook the ship—but it certainly didn’t feel distant to Artoo Detoo or See Threepio. The concussion bounced them around the narrow corridor like bearings in an old motor.

To look at these two, one would have supposed that the tall, humanlike machine, Threepio, was the master and the stubby, tripodal robot, Artoo Detoo, an inferior. But while Threepio might have sniffed disdainfully at the suggestion, they were in fact equal in everything save loquacity. Here Threepio was clearly—and necessarily—the superior.

Still another explosion rattled the corridor, throwing Threepio off balance. His shorter companion had the better of it during such moments with his squat, cylindrical body’s low center of gravity well balanced on thick, clawed legs.

Artoo glanced up at Threepio, who was steadying himself against a corridor wall. Lights blinked enigmatically around a single mechanical eye as the smaller robot studied the battered casing of his friend. A patina of metal and fibrous dust coated the usually gleaming bronze finish, and there were some visible dents—all the result of the pounding the rebel ship they were on had been taking.

Accompanying the last attack was a persistent deep hum which even the loudest explosion had not been able to drown out. Then for no apparent reason, the basso thrumming abruptly ceased, and the only sounds in the otherwise deserted corridor came from the eerie dry-twig crackle of shorting relays or the pops of dying circuitry. Explosions began to echo through the hip once more, but they were far away from the corridor.

Threepio turned his smooth, humanlike head to one side. Metallic ears listened intently. The imitation of a human pose was hardly necessary—Threepio’s auditory sensors were fully omnidirectional—but the slim robot had been programmed to blend perfectly among human company. This programming extended even to mimicry of human gestures.

“Did you hear that?” he inquired rhetorically of his patient companion, referring to the throbbing sound. “They’ve shut down the main reactor and the drive.” His voice was as full of disbelief and concern as that of any human. One metallic palm rubbed dolefully at a patch of dull gray on his side, where a broken hull brace had fallen and scored the bronze finish. Threepio was a fastidious machine, and such things troubled him.

“Madness, this is madness.” He shook his head slowly. “This time we’ll be destroyed for sure.”

Artoo did not comment immediately. Barrel torso tilted backward, powerful legs gripping the deck, the meter-high robot was engrossed in studying the roof overhead. Though he did not have a head to cock in a listening posture like his friend, Artoo still somehow managed to convey that impression. A series of short beeps and chirps issued from his speaker. To even a sensitive human ear they would have been just so much static, but to Threepio they formed words as clear and pure as direct current.

“Yes, I suppose they did have to shut the drive down,” Threepio admitted, “but what are we going to do now? We can’t enter atmosphere with our main stabilizer fin destroyed. I can’t believe we’re simply going to surrender.”

A small band of armed humans suddenly appeared, rifles held at the ready. Their expressions were as worry-wrinkled as their uniforms, and they carried about them the aura of men prepared to die.

Threepio watched silently until they had vanished around a far bend in the passageway, then looked back at Artoo. The smaller robot hadn’t shifted from his position of listening. Threepio’s gaze turned upward also though he knew Artoo’s senses were slightly sharper than his own.

“What is it, Artoo?” A short burst of beeping came in response. Another moment, and there was no need for highly attuned sensors. For a minute or two more, the corridor remained deathly silent. Then a faint scrape, scrape could be heard, like a cat at a door, from somewhere above. That strange noise was produced by heavy footsteps and the movement of bulky equipment somewhere on the ship’s hull.

When several muffled explosions sounded, Threepio murmured, “They’ve broken in somewhere above us. There’s no escape for the Captain this time.” Turning, he peered down at Artoo. “I think we’d better—”

The shriek of overstressed metal filled the air before he could finish, and the far end of the passageway was lit by a blinding actinic flash. Somewhere down there the little cluster of armed crew who had passed by minutes before had encountered the ship’s attackers.

Threepio turned his face and delicate photoreceptors away—just in time to avoid the fragments of metal that flew down the corridor. At the far end a gaping hole appeared in the roof, and reflective forms like big metal beads began dropping to the corridor floor. Both robots knew that no machine could match the fluidity with which those shapes moved and instantly assumed fighting postures. The new arrivals were humans in armor, not mechanicals.

One of them looked straight at Threepio—no, not at him, the panicked robot thought frantically, but past him. The figure shifted its big rifle around in armored hands—too late. A beam of intense light struck the head, sending pieces of armor, bone, and flesh flying in all directions.

Half the invading Imperial troops turned and began returning fire up the corridor—aiming past the two robots.

“Quick—this way!” Threepio ordered, intending to retreat from the Imperials. Artoo turned with him. They had taken only a couple of steps when they saw the rebel crewmen in position ahead, firing down the corridor. In seconds the passageway was filled with smoke and crisscrossing beams of energy.

One beam struck near the robot’s feet at the same time as a second one burst the wall directly behind him, exposing sparking circuitry and rows of conduits. The force of the twin blast tumbled Threepio into the shredded cables, where a dozen different currents turned him into a jerking, twisting display.

Strange sensations coursed through his metal nerve-ends. They caused no pain, only confusion. Every time he moved and tried to free himself there was another violent crackling as a fresh cluster of componentry broke. The noise and man-made lightning remained constant around him as the battle continued to rage.

Smoke began to fill the corridor. Artoo Detoo bustled about trying to help free his friend. The little robot evidenced a phlegmatic indifference to the ravening energies filling the passageway. He was built so low that most of the beams passed over him anyhow.

“Help!” Threepio yelled, suddenly frightened at a new message from an internal sensor. “I think something is melting. Free my left leg—the trouble’s near the pelvic servomotor.” Typically, his tone turned abruptly from pleading to berating.

“This is all your fault!” he shouted angrily. “I should have known better than to trust the logic of a half-sized thermocapsulary dehousing assister. I don’t know why you insisted we leave our assigned stations to come down this stupid access corridor. Not that it matters now. The whole ship must be—” Artoo Detoo cut him off in midspeech with some angry beepings and hoots of his own, though he continued to cut and pull with precision at the tangled high-voltage cables.

An exceptionally violent explosion shook the passage, drowning him out. A lung-searing miasma of carbonized component filled the air, obscuring everything.

George Lucas’s devotion to timeless storytelling and cutting-edge innovation has resulted in some of the most successful and beloved films of all time, including the Star Wars saga and the Indiana Jones franchise. He has pioneered new digital standards for sophistication in film visuals and sound, and inspired generations of young people to follow their dreams. 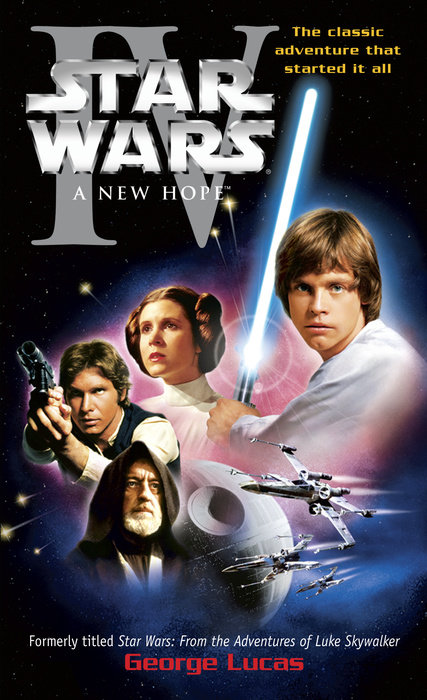