EPISODE III–THE ONE AND ONLY OFFICIAL SCREENPLAY, available exclusively in ebook format, including scenes that did not appear in the movie itself!

This is the complete, final screenplay written by George Lucas, as brought to life before the cameras by a stellar cast of performers and an unparalleled team of special effects wizards.

Enjoy a rare and fascinating director’s-eye-view of all the action, all the legendary characters, and each of the exotic worlds from science fiction cinema’s greatest saga, as it comes full circle. And thanks to the images from the final cut of the movie itself, you’ll be able to visualize the adventure as it unfolded throughout the shooting of Star Wars: Episode III: Revenge of the Sith.

For the total Star Wars fan and filmmaking enthusiast alike, this extraordinary ebook is an essential part of the Star Wars experience.

Features a bonus section following the novel that includes a primer on the Star Wars expanded universe, and over half a dozen excerpts from some of the most popular Star Wars books of the last thirty years!

An excerpt from Revenge of the Sith: Illustrated Screenplay: Star Wars: Episode III

THE FINAL SCRIPT OF STAR WARS:
EPISODE III REVENGE OF THE SITH

What follows is the final script by George Lucas, accompanied by many final frames from the movie. The script is the result of a rough draft and four subsequent drafts—all written before principal photography began in Sydney, Australia—as well as extensive revisions made during postproduction, including new scenes added during the pickups at Shepperton Studios in England (for a detailed description of Lucas’s writing process, see The Making of Star Wars: Revenge of the Sith). An example of previous revisions can be seen by comparing two versions of the film’s opening crawl:

War! General Grievous, commander of the separatist armies, has attacked Coruscant, the capital of the Republic, and has been driven back by the Jedi Commanders and their army of clones.

Evil is everywhere. There are heroes on both sides. Separatist commandos have kidnapped Supreme Chancellor Palpatine, leader of the Galactic Senate.

In the midst of the battle, two Jedi have discovered the starship where Chancellor Palpatine is being held captive and are attempting a rescue. . . .

War! The Republic is crumbling under the brutal attacks by the Separatist leader, Count Dooku. There are heroes on both sides. Evil is everywhere.

In a stunning move, the dreaded Separatist General Grievous has swept into the Republic capital and kidnapped Chancellor Palpatine, leader of the Galactic Senate.

As the Separatist Droid Army attempts to flee the besieged Capital with their valuable hostage, two Jedi Knights lead a desperate mission to rescue the captive Chancellor. . . .


Not only did Lucas change the script from draft to draft, he altered it extensively in the editing room, by moving scenes around, deleting some, adding others, and inter-cutting many. As a result, the scene numbers attributed to the shooting script used on the set in Sydney are different from those of the final script. For easy reader reference, scene numbers in parentheses refer to the shooting script scene number, as they appear in the Art of and Making of Star Wars: Episode III Revenge of the Sith.

A vast sea of stars serves as the backdrop for the Main Title, followed by a rollup, which crawls into infinity.

War! The Republic is crumbling under attacks by the ruthless Sith Lord, Count Dooku. There are heroes on both sides. Evil is everywhere.

In a stunning move, the fiendish droid leader, General Grievous, has swept into the Republic capital and kidnapped Chancellor Palpatine, leader of the Galactic Senate.

As the Separatist Droid Army attempts to flee the besieged capital with their valuable hostage, two Jedi Knights lead a desperate mission to rescue the captive Chancellor. . . .

PAN DOWN to reveal a REPUBLIC ATTACK CRUISER. Continue to PAN with the Cruiser as TWO JEDI STARFIGHTERS enter and head toward an enemy Battle Cruiser. TRUCK with the Jedi Fighters as they maneuver in unison, dodging flack and enemy laser fire. R2-D2 is on Anakin’s ship. R4-P17 is on Obi-Wan’s ship. A giant space battle is revealed as the tiny Jedi ships continue their assault in a synchronous ballet.

OBI-WAN bounces through the flack with a frown. His ship rocks violently.

ANAKIN: There isn’t a droid made that can out fly you, Master, and no other way to get to the Chancellor . . .

OBI-WAN struggles to maintain control of his ship.

OBI-WAN: We’ve got to split them up.

ANAKIN: Break left, fly through the guns on that tower.

OBI-WAN flies to the left of a huge tower on a REPUBLIC CRUISER. The TWO DROID DROP FIGHTERS follow.

ANAKIN: Don’t worry, I’m coming around behind you.

OBI-WAN deftly maneuvers around a large Starship’s superstructure, but the TWO DROID FIGHTERS stay on his tail, BLASTING him with intense laser fire.

OBI-WAN: Anakin, they’re all over me!

ARTOO BEEPS his reply as ANAKIN swoops in for the kill. ANAKIN BLASTS one of the DROID DROP FIGHTERS. It EXPLODES.

ANAKIN: (continuing, laughs) We got him, Artoo!

ANAKIN BLASTS away at the second DROID DROP FIGHTER as ARTOO BEEPS an angry warning.

OBI-WAN: I’m going down on the deck.

OBI-WAN dives toward the surface of one of the larger TRADE FEDERATION BATTLESHIPS and is forced to fly through a maelstrom of laser flack. He skims the surface, followed by the DROID DROP FIGHTER, which is followed by ANAKIN.

ANAKIN: (continuing) Cut right. Do you hear me?! Cut right. Don’t let him get a handle on you. Come on, Artoo, lock on! Lock on!

ARTOO BEEPS. The crosshairs merge on the DROID DROP FIGHTER.

OBI-WAN flies through a narrow gap between two towers on a Battleship. The DROID DROP FIGHTER hits one of Obi-Wan’s wings with a laser blast, and parts of the ship go flying around Obi-Wan’s Astro Droid, ARFOUR.

OBI-WAN: (continuing) Don’t even try to fix it, Arfour. I’ve shut it down.

ANAKIN drops in behind the DROID DROP FIGHTER and blows him apart. ARTOO SQUEALS with delight.

ANAKIN: Lock onto them, Artoo. Master, General Grievous’s ship is directly ahead.

ARTOO BEEPS a reply, and it reads out in Anakin’s cockpit.

ANAKIN: (continuing) The one crawling with vulture droids.

Ahead is a TRADE FEDERATION CRUISER with batlike DROID VULTURE FIGHTERS stalking around on the hull. The VULTURE FIGHTERS transform into flight configuration, lift off the CRUISER, and attack the JEDI STARFIGHTERS.

OBI-WAN: Not this time. There’s too much at stake. We need help. Odd Ball, do you copy?

OBI-WAN: Mark my position and form your squad up behind me . . .

The protective ray shield lowers on the main hangar of the TRADE FEDERATION CRUISER, and six new DROID TRI-FIGHTERS emerge and join the DROID VULTURE FIGHTERS heading toward the Jedi. The JEDI STARFIGHTERS extend the stability foils on the ends of their wings.

George Lucas’s devotion to timeless storytelling and cutting-edge innovation has resulted in some of the most successful and beloved films of all time, including the Star Wars saga and the Indiana Jones franchise. He has pioneered new digital standards for sophistication in film visuals and sound, and inspired generations of young people to follow their dreams. 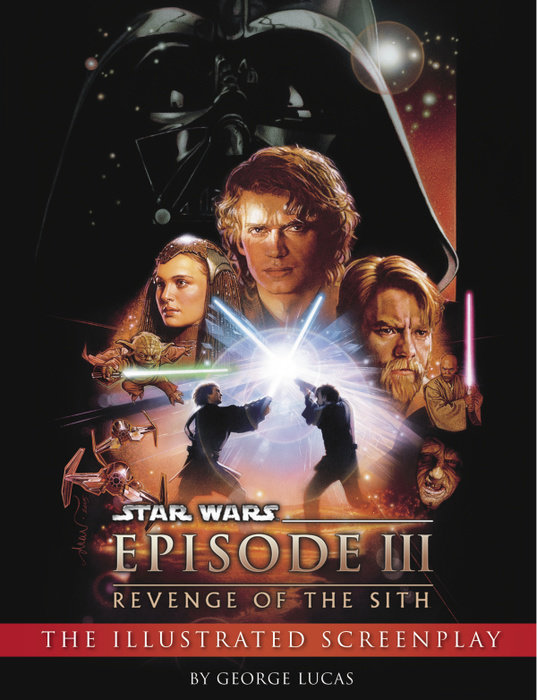