The Rise of Darth Vader

Throughout the galaxy, it was believed that Jedi Knight Anakin Skywalker–the Chosen One–had died on Coruscant during the siege of the Jedi Temple. And, to some extent, that was true. Anakin was dead.

From the site of Anakin Skywalker’s last stand–on the molten surface of the planet Mustafar, where he sought to destroy his friend and former master, Obi-Wan Kenobi–a fearsome specter in black has risen. Once the most powerful Knight ever known to the Jedi Order, he is now a disciple of the dark side, a lord of the dreaded Sith, and the avenging right hand of the galaxy’s ruthless new Emperor. Seduced, deranged, and destroyed by the machinations of the Dark Lord Sidious, Anakin Skywalker is dead . . . and Darth Vader lives.

Word of the events that created him–the Jedi Council’s failed mutiny against Supreme Chancellor Palpatine, the self-crowned Emperor’s retaliatory command to exterminate the Jedi Order, and Anakin’s massacre of his comrades and Masters in the Jedi Temple–has yet to reach all quarters. On the Outer Rim world of Murkhana, Jedi Masters Roan Shryne and Bol Chatak and Padawan Olee Starstone are leading a charge on a Separatist stronghold, unaware that the tide, red with Jedi blood, has turned suddenly against them.

When the three narrowly elude execution–and become the desperate prey in a hunt across space–it’s neither clone soldiers, nor the newly deployed stormtroopers, nor even the wrath of the power-hungry Emperor himself they must fear most. The deadliest threat rests in the hideously swift and lethal crimson lightsaber of Darth Vader–behind whose brooding mask lies a shattered heart, a poisoned soul, and a cunning, twisted mind hell-bent on vengeance.

For the handful of scattered Jedi, survival is imperative if the light side of the Force is to be protected and the galaxy somehow, someday reclaimed. Yet more important still is the well-being of the twin infants, Leia and Luke Skywalker, the children of Anakin and his doomed bride, Padmé Amidala. Separated after Padmé’s death, they must be made safe at all costs, lest the hope they represent for the future be turned to horror by the new Sith regime–and the unspeakable power of the dark side.

Dropping into swirling clouds conjured by Murkhana’s weather stations, Roan Shryne was reminded of meditation sessions his former Master had guided him through. No matter how fixed Shryne had been on touching the Force, his mind’s eye had offered little more than an eddying whiteness. Years later, when he had become more adept at silencing thought and immersing himself in the light, visual fragments would emerge from that colorless void—pieces to a puzzle that would gradually assemble themselves and resolve. Not in any conscious way, though frequently assuring him that his actions in the world were in accord with the will of the Force.

Frequently but not always.

When he veered from the course on which the Force had set him, the familiar white would once again be stirred by powerful currents; sometimes shot through with red, as if he were lifting his closed eyes to the glare of a midday sun.

Red-mottled white was what he saw as he fell deeper into Murkhana’s atmosphere. Scored to reverberating thunder; the rush of the wind; a welter of muffled voices . . .

He was standing closest to the sliding door that normally sealed the troop bay of a Republic gunship, launched moments earlier from the forward hold of the Gallant—a Victory-class Star Destroyer, harried by vulture and droid tri-fighters and awaiting High Command’s word to commence its own descent through Murkhana’s artificial ceiling. Beside and behind Shryne stood a platoon of clone troopers, helmets fitting snugly over their heads, blasters cradled in their arms, utility belts slung with ammo magazines, talking among themselves the way seasoned warriors often did before battle. Alleviating misgivings with inside jokes; references Shryne couldn’t begin to understand, beyond the fact that they were grim.

The gunship’s inertial compensators allowed them to stand in the bay without being jolted by flaring anti-aircraft explosions or jostled by the gunship pilots’ evasive maneuvering through corkscrewing missiles and storms of white-hot shrapnel. Missiles, because the same Separatists who had manufactured the clouds had misted Murkhana’s air with anti-laser aerosols.

Acrid odors infiltrated the cramped space, along with the roar of the aft engines, the starboard one stuttering somewhat, the gunship as battered as the troopers and crew it carried into conflict.

Even at an altitude of only four hundred meters above sea level the cloud cover remained dense. The fact that Shryne could barely see his hand in front of his face didn’t surprise him. This was still the war, after all, and he had grown accustomed these past three years to not seeing where he was going.

Nat-Sem, his former Master, used to tell him that the goal of the meditative exercises was to see clear through the swirling whiteness to the other side; that what Shryne saw was only the shadowy expanse separating him from full contact with the Force. Shryne had to learn to ignore the clouds, as it were. When he had learned to do that, to look through them to the radiant expanse beyond, he would be a Master.

Pessimistic by nature, Shryne’s reaction had been: Not in this lifetime. Though he had never said as much to Nat-Sem, the Jedi Master had seen through him as easily as he saw through the clouds.

Shryne felt that the clone troopers had a better view of the war than he had, and that the view had little to do with their helmet imaging systems, the filters that muted the sharp scent of the air, the earphones that dampened the sounds of explosions. Grown for warfare, they probably thought the Jedi were mad to go into battle as they did, attired in tunics and hooded robes, a lightsaber their only weapon. Many of them were astute enough to see comparisons between the Force and their own white plastoid shells; but few of them could discern between armored and unarmored Jedi—those who were allied with the Force, and those who for one reason or another had slipped from its sustaining embrace.

Murkhana’s lathered clouds finally began to thin, until they merely veiled the planet’s wrinkled landscape and frothing sea. A sudden burst of brilliant light drew Shryne’s attention to the sky. What he took for an exploding gunship might have been a newborn star; and for a moment the world tipped out of balance, then righted itself just as abruptly. A circle of clarity opened in the clouds, a perforation in the veil, and Shryne gazed on verdant forest so profoundly green he could almost taste it. Valiant combatants scurried through the underbrush and sleek ships soared through the canopy. In the midst of it all a lone figure stretched out his hand, tearing aside a curtain black as night . . .

Shryne knew he had stepped out of time, into some truth beyond reckoning.

A vision of the end of the war, perhaps, or of time itself.

Whichever, the effect of it comforted him that he was indeed where he was supposed to be. That despite the depth to which the war had caused him to become fixed on death and destruction, he was still tethered to the Force, and serving it in his own limited way.

Then, as if intent on foiling him, the thin clouds quickly conspired to conceal what had been revealed, closing the portal an errant current had opened. And Shryne was back where he started, with gusts of superheated air tugging at the sleeves and cowl of his brown robe.

“The Koorivar have done a good job with their weather machines,” a speaker-enhanced voice said into his left ear. “Whipped up one brute of a sky. We used the same tactic on Paarin Minor. Drew the Seps into fabricated clouds and blew them to the back of beyond.”

Shryne laughed without merriment. “Good to see you can still appreciate the little things, Commander.”

“What else is there, General?”

Shryne couldn’t make out the expression on the face behind the tinted T-visor, but he knew that shared face as well as anyone else who fought in the war. Commander of the Thirty-second air combat wing, the clone officer had somewhere along the line acquired the name Salvo, and the sobriquet fit him like a gauntlet.

The high-traction soles of his jump boots gave him just enough added height to stand shoulder-to-shoulder with Shryne, and where his armor wasn’t dinged and scored it was emblazoned with rust-brown markings. On his hips he wore holstered hand blasters and, for reasons Shryne couldn’t fathom, a version of the capelike command skirt that had become all the rage in the war’s third year. The left side of his shrapnel-pitted helmet was laser-etched with the motto live to serve!

Torso markings attested to Salvo’s participation in campaigns on many worlds, and while he wasn’t an ARC—an Advanced Reconnaissance Commando—he had the rough edges of an ARC, and of their clone template, Jango Fett, whose headless body Shryne had seen in a Geonosian arena shortly before Master Nat-Sem had fallen to enemy fire.

“Alliance weapons should have us in target lock by now,” Salvo said as the gunship continued to descend.

Other assault ships were also punching through the cloud cover, only to be greeted by flocks of incoming missiles. Struck by direct hits, two, four, then five craft were blown apart, flaming fuselages and mangled troopers plummeting into the churning scarlet waves of Murkhana Bay. From the nose of one gunship flew a bang-out capsule that carried the pilot and co- pilot to within meters of the water before it was ripped open by a resolute heat seeker.

In one of the fifty-odd gunships that were racing down the well, three other Jedi were going into battle, Master Saras Loorne among them. Stretching out with the Force, Shryne found them, faint echoes confirming that all three were still alive.

He clamped his right hand on one of the slide door’s view slots as the pilots threw their unwieldy charge into a hard bank, narrowly evading a pair of hailfire missiles. Gunners ensconced in the gunship’s armature-mounted turrets opened up with blasters as flights of Mankvim Interceptors swarmed up to engage the Republic force. The anti-laser aerosols scattered the blaster beams, but dozens of the Separatist craft succumbed to missiles spewed from the gunships’ top-mounted mass-drive launchers.

“High Command should have granted our request to bombard from orbit,” Salvo said in amplified voice.

“The idea is to take the city, Commander, not vaporize it,” Shryne said loudly. Murkhana had already been granted weeks to surrender, but the Republic ultimatum had expired. “Palpatine’s policy for winning the hearts and minds of Separatist populations might not make good military sense, but it makes good political sense.”

Salvo stared at him from behind his visor. “We’re not interested in politics.”

Shryne laughed shortly. “Neither were the Jedi.”

“Why fight if you weren’t bred for it?”

“To serve what remains of the Republic.” Shryne’s brief green vision of the war’s end returned, and he adopted a rueful grin. “Dooku’s dead. Grievous is being hunted down. If it means anything, I suspect it’ll be over soon.”

“The war, or our standing shoulder-to-shoulder?”

“What becomes of the Jedi then?”

“We’ll do what we have always done: follow the Force.”

“And the Grand Army?”

Shryne regarded him. “Help us preserve the peace.”

The Rise of Darth Vader 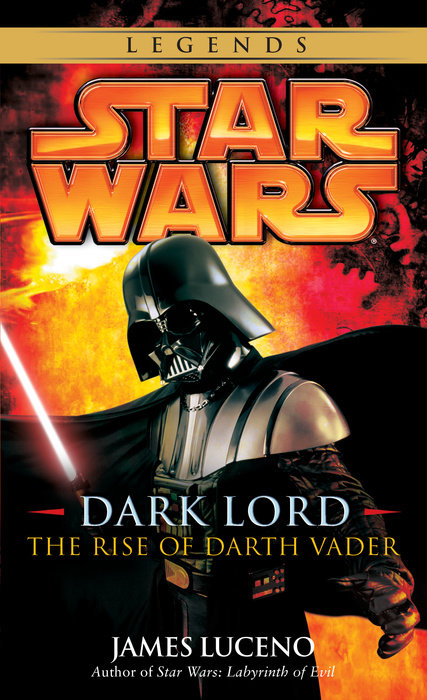