Agents of Chaos, Book I

Merciless attacks by an invincible alien force have left the New Republic reeling. Dozens of worlds have succumbed to occupation or annihilation, and even the Jedi Knights have tasted defeat. In these darkest of times, the noble Chewbacca is laid to rest, having died as heroically as he lived--and a grief-stricken Han Solo is left to fit the pieces of his shattered soul back together before he loses everything: friends, family, and faith.

Refusing help from Leia or Luke, Han becomes the loner he once was, seeking to escape the pain of his partner's death in adventure . . . and revenge. When he learns that an old friend from his smuggling days is operating as a mercenary for the enemy, he sets out to expose the traitor. But Han's investigation uncovers an even greater evil: a sinister conspiracy aimed at the very heart of the New Republic's will and ability to fight--the Jedi.

Now Han must face down his inner demons and, with the help of a new and unexpected ally, honor Chewbacca's sacrifice in the only way that matters--by being worthy of it.

If the system’s primary was distressed by the events that had transpired on and about the fourth closest of its brood, it betrayed nothing to the naked eye. Saturating local space with golden radiance, the star was as unperturbed now as it was before the battle had begun. Only the conquered world had suffered, its punished surface revealed in the steady crawl of sunlight. Regions that had once been green, blue, or white appeared ash-gray or reddish-brown. Below banks of panicked clouds, smoke chimneyed from immolated cities and billowed from tracts of firestormed evergreen forests. Steam roiled from the superheated beds of glacier-fed lakes and shallow seas.

Deep within the planet’s shroud of cinder and debris moved the warship most responsible for the devastation. The vessel was a massive ovoid of yorik coral, its scabrous black surface relieved in places by bands of smoother stuff, lustrous as volcanic glass. In the pits that dimpled the coarse stretches hid projectile launchers and plasma weapons. Other, more craterlike depressions housed the laser-gobbling dovin basals that both drove the vessel and shielded it from harm. From fore and aft extended bloodred and cobalt arms, to which asteroidlike fighters clung like barnacles. Smaller craft buzzed around it, some effecting repairs to battle-damaged areas, others keen on recharging depleted weapons systems, a few delivering plunder from the planet’s scorched crust.

Farther removed from the battle floated a smaller vessel, black, as well, but faceted and polished smooth as a gemstone. Light pulsed through the ship at intervals, exciting one facet, then another, as if data were being conveyed from sector to sector.

From a roost in the underside of its angular snout, a gaunt figure, cross-legged on cushions, scanned the flotsam and jetsam a quirk of a gravitational drift had borne close to his ship: pieces of New Republic capital ships and starfighters, space-suited bodies in eerie repose, undetonated projectiles, the holed fuselage of a noncombat craft whose legend identified it as the Penga Rift.

In the near distance hung the blackened skeleton of a defense platform. Off to one side a ruined cruiser rolled end over end in a decaying orbit, surrendering its contents to vacuum like a burst pod scattering fine seeds. Elsewhere a fleeing transport, snagged by the spike of a bloated capture vessel, was being tugged inexorably toward the bowels of the giant warship.

The seated figure beheld these sights without cheer or regret. Necessity had engineered the destruction. What had been done needed to be done.

An acolyte stood in the rear of the command roost, relaying updates as they were received by a slender, living device fastened to his right inner forearm by six insectile legs.

“Victory is ours, Eminence. Our air and ground forces have overwhelmed the principal population centers and a war coordinator has installed itself in the mantle.” The acolyte glanced at the receiving villip on his arm, whose soft bioluminescent glow added appreciably to the roost’s scant light. “Commander Tla’s battle tactician is of the opinion that the astrogation charts and historical data stored here will prove valuable to our campaign.”

The priest, Harrar, glanced at the warship. “Has the tactician made his feelings known to Commander Tla?”

The acolyte’s hesitancy was answer enough, but Harrar suffered the verbal reply anyway.

“Our arrival does not please the commander, Eminence. He does not dismiss out of hand the need for sacrifice, but he asserts that the campaign has been successful thus far without the need for religious overseers. He fears that our presence will only confound his task.”

“Commander Tla fails to grasp that we engage the enemy on different fronts,” Harrar said. “Any opponent can be beaten into submission, but compliance is no guarantee that you have won him over to your beliefs.”

“Shall I relay as much to the commander, Eminence?”

“It is not your place. Leave that to me.”

Harrar, a male of middle years, rose and moved to the lip of the roost’s polygonal transparency, where he stood with three-fingered hands clasped at the small of his back—the missing digits having been offered in dedication ceremonies and ritual sacrifices, as a means of escalating himself. His tall slender frame was draped in supple fabrics of muted tones. A head cloth, patterned and significantly knotted, bound his long black tresses. The back of his neck showed vibrant markings etched into skin stretched taut by prominent vertebrae.

The planet turned beneath him.

“What is this world called?”

“Obroa-skai,” Harrar mused aloud. “What does the name signify?”

“The meaning is unknown at present. Though no doubt some explanation can be found among the captured data.”

A flash of weapons drew his eye to Obroa-skai’s terminator, where a yorik coral gunship was angling into the light, spewing rear fire at a quartet of snub-nosed starfighters that had evidently chased it from the planet’s dark side. The little X-wings were closing fast, thrusters ablaze and wingtips lancing energy beams at the larger ship. Harrar had heard that the New Republic pilots had become adept at foiling the dovin basals by altering the frequency and intensity of the laser bolts the fighters discharged. These four pursued the gunship with a single-mindedness born of thorough self-possession. Such fierce confidence spoke to qualities the Yuuzhan Vong would need to keep solidly in mind as the invasion advanced. Largely oblivious to nuance, the warrior caste would have to be taught to appreciate that survival figured as strongly in the enemy’s beliefs as death figured in the beliefs of the Yuuzhan Vong.

The gunship had changed vector and was climbing now, seemingly intent on availing itself of the protection offered by Commander Tla’s warship. But the four fighters were determined to have it. Breaking formation, they accelerated, ensnaring the gunship at the center of their wrath.

The X-wing pilots executed their attack with impressive precision. Laser bolts and brilliant pink torpedoes rained from them, taxing the abilities of the gunship’s dovin basals. For every bolt and torpedo engulfed by the gravitic collapses the dovin basals fashioned, another penetrated, searing fissures in the assault craft and sending hunks of reddish-black yorik coral exploding in all directions. Stunned by relentless strikes, the gunship huddled inside its shields, hoping for a moment’s respite, but the starfighters refused to grant it any quarter. Bursts of livid energy assailed the ship, shaking it off course. The dovin basals began to falter. With defenses hopelessly compromised, the larger ship diverted power to weapons and counterattacked.

In a desperate show of force, vengeful golden fire erupted from a dozen gun emplacements. But the starfighters were simply too quick and agile. They made pass after pass, raking fire across the gunship’s suddenly vulnerable hull. Gouts of slagged flesh fountained from deep wounds and lasered trenches. The destruction of a plasma launcher sent a chain of explosions marching down the starboard side. Molten yorik coral streamed from the ship like a vapor trail. Shafts of blinding light began to pour from the core. The ship rolled over on its belly, shedding velocity. Then, jolted by a final paroxysm, it disappeared in a short-lived globe of fire.

It looked as if the X-wings might attempt to take the fight to the warship itself, but at the last moment the pilots turned tail. Salvos from the warship’s weapons crisscrossed nearby space, but no missiles found their mark.

His scarified face a deeply shadowed mask, Harrar glanced over his shoulder at the acolyte. “Suggest to Commander Tla that his zealous gunners allow the little ones to escape,” he said with incongruous composure. “After all, someone needs to live to speak of what happened here.”

“Harrar pivoted to face him fully, a bemused glint in his deeply set eyes. “Is that respect I hear?”

The acolyte nodded his head in deference. “Nothing more than an observation, Eminence. To earn my respect, they would have to embrace willingly the truth we bring them.”

A herald of lesser station appeared in the roost, offering salute by snapping his fists to opposite shoulders. “Belek tiu, Eminence. I bring word that the captives have been gathered.”

“Several hundred—of diverse aspect. Do you wish to oversee the selection for the sacrifice?”

Harrar squared his shoulders and adjusted the fall of his elegant robes. “I am most eager to do so.”

Agents of Chaos, Book I 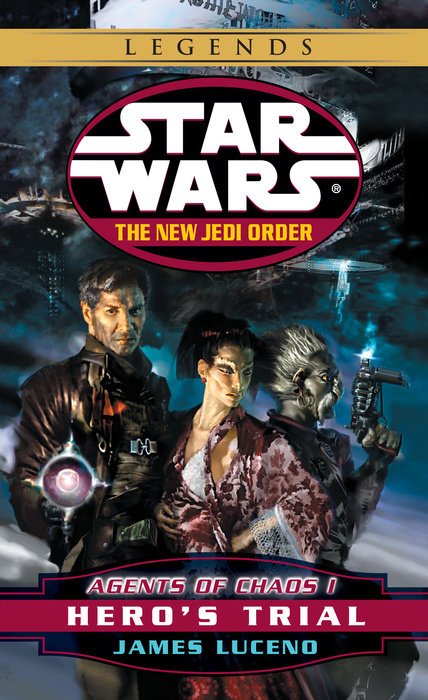