In the searing pages of this classic autobiography, originally published in 1964, Malcolm X, the Muslim leader, firebrand, and anti-integrationist, tells the extraordinary story of his life and the growth of the Black Muslim movement. His fascinating perspective on the lies and limitations of the American Dream, and the inherent racism in a society that denies its nonwhite citizens the opportunity to dream, gives extraordinary insight into the most urgent issues of our own time. The Autobiography of Malcolm X stands as the definitive statement of a movement and a man whose work was never completed but whose message is timeless. It is essential reading for anyone who wants to understand America.

Praise for The Autobiography of Malcolm X

“This book will have a permanent place in the literature of the Afro-American struggle.”—I. F. Stone

An excerpt from The Autobiography of Malcolm X

When my mother was pregnant with me, she told me later, a party of hooded Ku Klux Klan riders galloped up to our home in Omaha, Nebraska, one night. Surrounding the house, brandishing their shotguns and rifles, they shouted for my father to come out. My mother went to the front door and opened it. Standing where they could see her pregnant condition, she told them that she was alone with her three small children, and that my father was away, preaching, in Milwaukee. The Klansmen shouted threats and warnings at her that we had better get out of town because “the good Christian white people” were not going to stand for my father’s “spreading trouble” among the “good” Negroes of Omaha with the “back to Africa” preachings of Marcus Garvey.

My father, the Reverend Earl Little, was a Baptist minister, a dedicated organizer for Marcus Aurelius Garvey’s U.N.I.A. (Universal Negro Improvement Association). With the help of such disciples as my father, Garvey, from his headquarters in New York City’s Harlem, was raising the banner of black-race purity and exhorting the Negro masses to return to their ancestral African homeland—a cause which had made Garvey the most controversial black man on earth.
Still shouting threats, the Klansmen finally spurred their horses and galloped around the house, shattering every window pane with their gun butts. Then they rode off into the night, their torches flaring, as suddenly as they had come.

My father was enraged when he returned. He decided to wait until I was born—which would be soon—and then the family would move. I am not sure why he made this decision, for he was not a frightened Negro, as most then were, and many still are today. My father was a big, six-foot-four, very black man. He had only one eye. How he had lost the other one I have never known. He was from Reynolds, Georgia, where he had left school after the third or maybe fourth grade. He believed, as did Marcus Garvey, that freedom, independence and self-respect could never be achieved by the Negro in America, and that therefore the Negro should leave America to the white man and return to his African land of origin. Among the reasons my father had decided to risk and dedicate his life to help disseminate this philosophy among his people was that he had seen four of his six brothers die by violence, three of them killed by white men, including one by lynching. What my father could not know then was that of the remaining three, including himself, only one, my Uncle Jim, would die in bed, of natural causes. Northern white police were later to shoot my Uncle Oscar. And my father was finally himself to die by the white man’s hands.

It has always been my belief that I, too, will die by violence. I have done all that I can to be prepared.

I was my father’s seventh child. He had three children by a previous marriage—Ella, Earl, and Mary, who lived in Boston. He had met and married my mother in Philadelphia, where their first child, my oldest full brother, Wilfred, was born. They moved from Philadelphia to Omaha, where Hilda and then Philbert were born.

I was next in line. My mother was twenty-eight when I was born on May 19, 1925, in an Omaha hospital. Then we moved to Milwaukee, where Reginald was born. From infancy, he had some kind of hernia condition which was to handicap him physically for the rest of his life.

Louise Little, my mother, who was born in Grenada, in the British West Indies, looked like a white woman. Her father was white. She had straight black hair, and her accent did not sound like a Negro’s. Of this white father of hers, I know nothing except her shame about it. I remember hearing her say she was glad that she had never seen him. It was, of course, because of him that I got my reddish-brown “mariny” color of skin, and my hair of the same color. I was the lightest child in our family. (Out in the world later on, in Boston and New York, I was among the millions of Negroes who were insane enough to feel that it was some kind of status symbol to be light-complexioned—that one was actually fortunate to be born thus. But, still later, I learned to hate every drop of that white rapist’s blood that is in me.)

Our family stayed only briefly in Milwaukee, for my father wanted to find a place where he could raise our own food and perhaps build a business. The teaching of Marcus Garvey stressed becoming independent of the white man. We went next, for some reason, to Lansing, Michigan. My father bought a house and soon, as had been his pattern, he was doing freelance Christian preaching in local Negro Baptist churches, and during the week he was roaming about spreading word of Marcus Garvey.

He had begun to lay away savings for the store he had always wanted to own when, as always, some stupid local Uncle Tom Negroes began to funnel stories about his revolutionary beliefs to the local white people. This time, the get-out-of-town threats came from a local hate society called The Black Legion. They wore black robes instead of white. Soon, nearly everywhere my father went, Black Legionnaires were reviling him as an “uppity nigger” for wanting to own a store, for living outside the Lansing Negro district, for spreading unrest and dissention among “the good niggers.”

As in Omaha, my mother was pregnant again, this time with my youngest sister. Shortly after Yvonne was born came the nightmare night in 1929, my earliest vivid memory. I remember being suddenly snatched awake into a frightening confusion of pistol shots and shouting and smoke and flames. My father had shouted and shot at the two white men who had set the fire and were running away. Our home was burning down around us. We were lunging and bumping and tumbling all over each other trying to escape. My mother, with the baby in her arms, just made it into the yard before the house crashed in, showering sparks. I remember we were outside in the night in our underwear, crying and yelling our heads off. The white police and firemen came and stood around watching as the house burned down to the ground.

My father prevailed on some friends to clothe and house us temporarily; then he moved us into another house on the outskirts of East Lansing. In those days Negroes weren’t allowed after dark in East Lansing proper. There’s where Michigan State University is located; I related all of this to an audience of students when I spoke there in January, 1963 (and had the first reunion in a long while with my younger brother, Robert, who was there doing postgraduate studies in psychology). I told them how East Lansing harassed us so much that we had to move again, this time two miles out of town, into the country. This was where my father built for us with his own hands a four-room house. This is where I really begin to remember things—this home where I started to grow up.”

After the fire, I remember that my father was called in and questioned about a permit for the pistol with which he had shot at the white men who set the fire. I remember that the police were always dropping by our house, shoving things around, “just checking” or “looking for a gun.” The pistol they were looking for—which they never found, and for which they wouldn’t issue a permit—was sewed up inside a pillow. My father’s .22 rifle and his shotgun, though, were right out in the open; everyone had them for hunting birds and rabbits and other game.

Alex Haley is the world-renowned author of Roots, which has sold six million hardcover copies and has been translated into thirty languages. He was awarded the Pulitzer Prize and the National Book Award. Alex Haley died in February 1992. 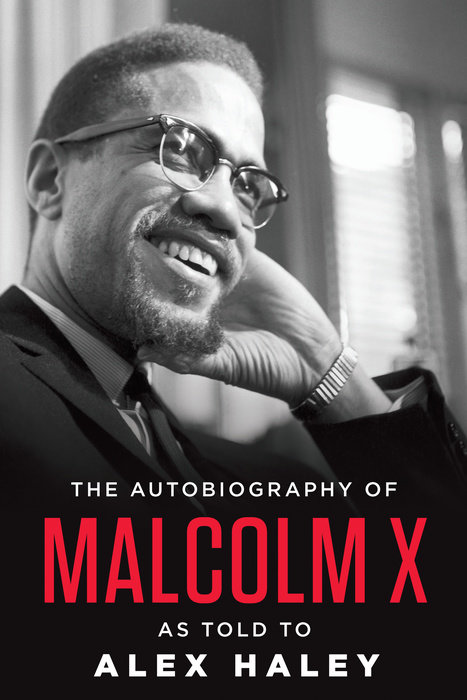