The Making of the American Constitution

In May 1787, in an atmosphere of crisis, delegates met in Philadelphia to design a radically new form of government. Distinguished historian Richard Beeman captures as never before the dynamic of the debate and the characters of the men who labored that historic summer. Virtually all of the issues in dispute—the extent of presidential power, the nature of federalism, and, most explosive of all, the role of slavery—have continued to provoke conflict throughout our nation's history. This unprecedented book takes readers behind the scenes to show how the world's most enduring constitution was forged through conflict, compromise, and fragile consensus. As Gouverneur Morris, delegate of Pennsylvania, noted: "While some have boasted it as a work from Heaven, others have given it a less righteous origin. I have many reasons to believe that it is the work of plain, honest men."

An excerpt from Plain, Honest Men

it was a blustery Saturday morning on March 15, 1783, and patches of snow still flecked the ground. General George Washington strode up a long hill toward a rocky promontory at the American army encampment seven miles southwest of Newburgh, New York. He was about to face the greatest personal challenge of his career. He was uncharacteristically nervous and uncertain, roiled by sensations of anger, frustration, and inadequacy. He had led his army to a brilliant victory over the British at Yorktown some seventeen months earlier. Yet the soldiers at Newburgh remained in the field, languishing, while peace negotiations dragged on in Paris. His troops had not been paid for many months, and the Continental Congress’s promises of a generous pension seemed as empty as the coffers of the bankrupt Confederation government.

To make matters worse, a cabal of American army officers, angry over the failure of the continental government to make good on its promises, had decided to take matters into their own hands. Five days earlier, Major John Armstrong, aide-de-camp to the commander at Newburgh, General Horatio Gates (Washington’s longtime rival), circulated an “address” to the soldiers, urging them to cease their meek supplications to an uncaring Congress and, if necessary, to throw off Washington’s leadership and redress their grievances by force of arms. In a letter to his former aide-de-camp and protégé Alexander Hamilton, Washington expressed his fear that the disgruntled soldiers might throw “themselves into a gulph of Civil Horror.” Yet at the same time he had deep sympathy for their plight. Indeed, Hamilton had been gently nudging his mentor to throw in his lot with the discontented soldiers. As he approached his destination, Washington faced a painful choice: to remain loyal to his long-suffering troops or to honor the rule of law.

America’s ambitious experiment in liberty had seemed full of promise seven years earlier, in the summer of 1776, when Washington had ordered his commanders to read the Declaration of Independence aloud to their troops in order to steel them for the sacrifices ahead. And they had met the challenge. Since that time they had persevered through the cold and deprivation of Valley Forge, through nearly seven years of often dispiriting battle against the better-equipped British Army. Washington had come to understand that American liberty and American union—a strong union—were inseparable. The discontented soldiers at Newburgh threatened to put both liberty and the union at risk.

When he reached the top of the promontory, Washington entered a cavernous, drafty building, one hundred ten by thirty feet, which looked down on the Continental army encampment below. The “New Building” had been constructed a few months earlier to encourage “sociability” among the officers. But as Washington walked the length of the long hall past the five hundred assembled officers toward a small stage and lectern at the far end, there was little feeling of sociability in the air. The spectacle presented by the officers, many of them with faces set in anger, deepened Washington’s gloom. Everything about their appearance testified to the shameful neglect they had suffered at the hands of the continental government—from their torn and soiled uniforms to their worn-out boots and gaunt faces. And these were the privileged few, the officers. Washington knew that the enlisted men, waiting in their barracks for news of the outcome of the meeting, had suffered even greater privation. While the officers were at times reduced to making their overcoats out of blankets, they wore those overcoats, as historian Charles Royster has observed, “in the presence of men who had no blankets.” Forced to endure bitterly cold winters, often clad in uniforms pieced together from an old hunting shirt, overalls, or even rags, and subsisting on a diet barely adequate to keep body and soul together, the ordinary foot soldiers in Washington’s army had every reason to believe their country had betrayed them. The failure of the government to pay the soldiers their wages hit the enlisted men the hardest, and it seemed to Washington nothing short of criminal. Their wives and children back home were reduced to begging in the streets in order to avoid starvation. Was this the “liberty” for which Americans had fought?

By the time Washington made his entrance, General Gates had already opened the meeting. Washington interrupted him, asking for permission to address the officers. Visibly shaken by Washington’s presence, Gates had no choice but to accede to the request of his rival, who was, after all, the commander in chief of the Continental army.4
A man typically comfortable and confident in any public situation, Washington was visibly agitated and uneasy. He began with an apology. He had not intended to involve himself in the controversy, but upon reading the content of Major Armstrong’s address, he felt it necessary to speak his mind. In a departure from his usual manner in speaking to his officers, he would not speak off-the-cuff. Instead he took from the pocket of his coat a speech he had painstakingly written out the day before. He began by vowing that he would extend every effort and power at his command “in the attainment of complete justice for all of your trials and dangers,” but then, assuming a suppliant tone, he proceeded.

Let me entreat you, gentlemen, on your part, not to take any measures which, viewed in the calm light of reason, will lessen the dignity and sully the glory you have hitherto maintained; let me request you to rely on the plighted faith of your country, and place a full confidence in the purity of the intentions of Congress.... You will, by the dignity of your conduct afford occasion for posterity to say, when speaking of the glorious example you have exhibited to mankind, “had this day been wanting, the world had never seen the last stage of perfection of which human nature is capable of attaining.”

It was an impressive ending, perhaps as impressive a speech as Washington had ever given, but looking out at his audience, he could see that many of the officers remained unmoved. At that point he pulled from his pocket a letter from one of his Virginia friends—Joseph Jones, a delegate to the Continental Congress—who had written him expressing sympathy for the plight of the soldiers and promising to work in the Congress to honor the government’s obligations to them. The letter was scrawled out in barely legible form, and Washington stumbled over its first few sentences. Disoriented, he searched in the pocket of his coat once again and pulled out a pair of spectacles that had recently been sent to him by the Philadelphia scientist, David Rittenhouse. It was probably the first time anyone had ever seen Washington wear spectacles in public. “Gentlemen,” he said, “you must pardon me. I have grown grey in your service, and now find myself going blind.” He put on the glasses and finished reading the letter, making it clear to the officers that he would place his prestige and honor on the line in their cause, so long as that cause was served in a peaceful and lawful manner. Then, without fanfare, he left the room—and the soldiers to their deliberations.

As he made his exit, tears streamed down the cheeks of some of the soldiers’ faces, and a hush—a hush borne of contrition and shame—fell over the hall. When they recovered their composure, the soldiers gave him a formal vote of thanks, repudiated Major Armstrong’s address, and asked their commander in chief to act as their agent in securing their just rewards for service to their country.

Was it a guileless performance? It probably was not, for Washington was a man who always carefully gauged the effects of his demeanor and his words in any public situation. But one thing is certain. No other man in America could have pulled it off. And Washington was true to his word. The Continental Congress, terrified by the threat of armed revolt and grovelingly grateful to Washington for his intervention, pledged its support for a financial settlement that went at least a part of the way toward meeting the soldiers’ salary and pension demands.

If one is looking for critical turning points in American history, times when the future direction of the republic might have altered course, Washington’s performance at Newburgh, the Constitutional Convention, Lincoln’s Gettysburg Address, and the subsequent passage of the constitutional amendments eradicating slavery from the American Constitution stand out as decisive. Washington was the only man in America who possessed the combination of charisma, political and military experience, and public support capable of converting America’s experiment in republican liberty into a dictatorship—a benevolent dictatorship perhaps, but a dictatorship nevertheless. Given the financial disarray and civil disorder represented by the discontent of the soldiers at Newburgh, Washington could have convinced himself that military solutions to civil political problems were the best course of action, as did many leaders in the revolutions of Latin America in the century to come. Some, like Simón Bolívar in Venezuela, Peru, and Columbia, did so reluctantly. Others, like Santa Anna in Mexico or Bernardo O’Higgins in Chile, did so more eagerly. All of these countries have lived with a tradition of military intrusion in the affairs of their governments ever since.

Richard Beeman is a professor of history at the University of Pennsylvania and the author of several books on the history of revolutionary America; his biography of Patrick Henry was a finalist for the National Book Award. He has received awards from, among others, the Rockefeller Foundation and the National Endowment for the Humanities, and he has served as Harmsworth Professor of American History at Oxford University. Professor Beeman also serves as a trustee and vice-chair of the Distinguished Scholars Panel of the National Constitution Center. He lives in Philadelphia.

The Making of the American Constitution 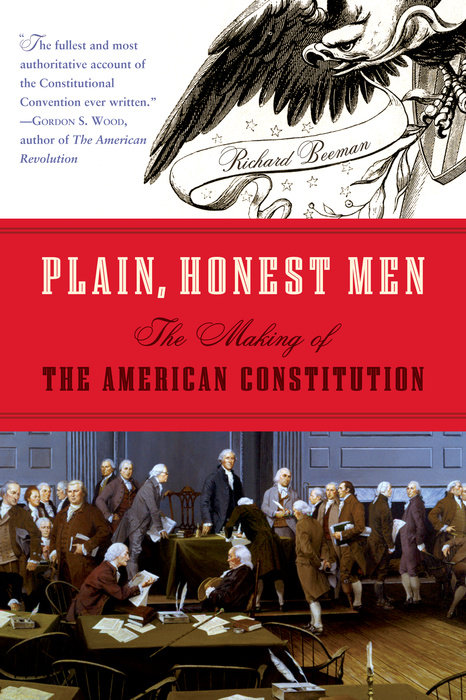