The timeless masterpiece from Alessandro Manzoni, the father of modern Italian literature, in the first new English-language translation in fifty years, hailed as “a landmark literary occasion” by Jhumpa Lahiri in her preface to the edition

The Betrothed is a cornerstone of Italian culture, language, and literature. Published in its final form in 1842, the novel has inspired generations of Italian readers and writers. Giuseppe Verdi composed his majestic Requiem Mass in honor of Manzoni. Italo Calvino called the novel “a classic that has never ceased shaping reality in Italy” while Umberto Eco praised its author as a “most subtle critic and analyst of languages.” The Betrothed has been celebrated by Primo Levi and Natalia Ginzburg, and is one of Pope Francis’s favorite books. But, until now, it has remained relatively unknown to English readers.

In the fall of 1628, two young lovers are forced to flee their village on the shores of Lake Como after a powerful lord prevents their marriage, plunging them into the maelstrom of history. Manzoni draws on actual people and events to create an unforgettable fresco of Italian life and society. In this greatest of historical novels, he takes the reader on a journey through the Spanish occupation of Milan, the ravages of war, class tensions, social injustice, religious faith, and a plague that devastates northern Italy. But within Manzoni’s epic tale, readers will also hear powerful echoes of our own day.

An excerpt from The Betrothed

The branch of Lake Como that turns south between two unbroken mountain chains, bordered by coves and inlets that echo the furrowed slopes, suddenly narrows to take the flow and shape of a river, between a promontory on the right and a wide shoreline on the opposite side. The bridge that joins the two sides at this point seems to make this transformation even more visible to the eye and mark the spot where the lake ends and the Adda begins again, to reclaim the name lake where the shores, newly distant, allow the water to spread and slowly pool into fresh inlets and coves. Formed from the sediment of three large streams, the shoreline lies at the foot of two neighboring mountains, the first called San Martino, the second, in Lombard dialect, the “Resegone”—the big saw—after the row of many small peaks that really do make it look like one. So clear is the resemblance that no one—provided they are directly facing it, from the northern walls of Milan, for example—could fail to immediately distinguish this summit from other mountains in that long and vast range with more obscure names and more common shapes. For a good stretch the shore rises upward into a smooth rolling slope. Then it breaks off into small hills and ravines, steep inclines and flat terraces, molded by the contours of the two mountains and the erosion of the waters. The water’s edge, cut by the outlets of the streams, is almost all pebbles and stones. The rest is fields and vineyards, dotted with towns, villages, and hamlets. Here and there a woods climbs up the side of the mountain.

Lecco, the capital that lends its name to the province, stands at a short remove from the bridge, and is on and indeed partly inside the lake when the water rises. Nowadays it is a large town well on its way to becoming a city. At the time of the events I am about to relate, this already good-sized village was also fortified, which conferred upon it the honor of a commander in residence, and the benefit of a permanent garrison of Spanish soldiers, who taught modesty to the girls and women of the town, gave an occasional tap on the back to a husband or father, and, at summer’s end, never failed to spread out into the vineyards to thin the grapes and relieve the peasants of the trouble of harvesting them.

Roads and footpaths used to run—and still do—from town to town, from summit to shore, from hill to hill. Some are more or less steep; some are level. In places they dip, sinking between two walls, and all you can see when you look up is a patch of sky and a mountaintop. In others they climb to open embankments, where the view encompasses a broader panorama, always rich, always new, depending on the vantage point and how much of the vast expanse can be seen, and on whether the landscape protrudes or recedes, stands out from or disappears into the horizon.

One piece, then another, then a long stretch of that vast and varied mirror of water. Over here, the lake—terminating at the far end or vanishing into a cluster, a procession of mountains—slowly growing wider between yet more mountains that unfold before the eyes, one by one, whose image, alongside that of the towns by the lake, is reflected upside down in the water. Over there, a bend in the river, then more lake, then river again disappearing into a shiny ribbon curling between the mountains on either side, and slowly descending to vanish on the horizon.

The place from which you contemplate these varied sights offers its own display on every side. The mountain along whose slopes you walk unfolds its peaks and crags above and around you, distinct, prominent, changing with every step, opening and then circling into ridges where a lone summit had at first appeared. The shapes that were reflected in the lake only minutes before now appear close to the summit. The tame, pleasant foothills temper the wild landscape and enhance the magnificence of the other vistas.

Along one of these footpaths, on the evening of the seventh day of November in 1628, Don Abbondio, the parish priest of one of the villages just mentioned, was making his way home from a leisurely walk. (Neither here nor elsewhere does the manuscript give the name of his parish or family.) He was calmly reciting the Liturgy of the Hours. Occasionally, between one psalm and another, he would close his breviary, keeping his right index finger inside as a bookmark. Clasping his hands together behind his back, he would continue his walk, staring at the ground and kicking toward the wall any stones that got in the way. Then he would look up, let his eyes wander idly, and gaze at the wide and uneven splashes of purple on the cliffs, painted there by the light of the setting sun that had peeked through crevices in the mountain on the opposite shore.

After opening his breviary again and reciting another passage, he came to a curve in the path where it was always his custom to look up from his book and stare straight ahead. Today was no different. Past the curve, the road continued straight for another sixty steps or so and then split into two lanes, in a Y shape. The path to the right went up the mountain and toward the rectory. The one to the left went down to the valley as far as a stream. On that side the wall was only waist high.

The inner walls of the two lanes converged not on a corner but on a roadside shrine painted with long, wavy figures that ended in a point. In the intentions of the artist and to the eyes of the neighborhood residents they depicted tongues of fire, alternating with vague figures representing souls in purgatory. The souls and flames were brick-red against a gray background that was mottled in spots where the plaster had flaked off.

As he turned the corner and directed his gaze, as usual, toward the shrine, the priest noticed something unexpected that he would rather not have seen. Two men were facing each other at the spot where the two lanes meet. The first was sitting astride the low wall, one leg dangling on the outside and one foot planted on the ground. His companion stood, leaning against the opposite wall, arms folded over his chest. Their clothing, demeanor, and expression—or what  little the priest could discern from a distance—left little doubt as to their station in life.

Around his head each man was wearing a loose-knit green stocking cap underneath which a thick forelock poked out; the cap hung down to the left shoulder and ended in a large tassel. Both had a long mustache curled to a tip; a shiny leather belt with two pistols attached; a small powder horn dangling over his chest like a pendant; a knife handle sticking out of one pocket of his wide, baggy britches; and a longsword whose large hilt was covered with shiny brass fretwork in the shape of a monogram. At a glance you could see they were letting themselves be known as members of the bravi species.

This species, which is extinct nowadays, flourished in Lombardy at that time and already had for decades. For those who know nothing about them, here are some excerpts from original documents that indicate their main characteristics, the efforts made to eradicate them, and their hardy, enduring vitality.

On the eighth of April in the year 1583, the Most Illustrious and Excellent Don Carlos of Aragon, Prince of Castelvetrano, Duke of Terranuova, Marquis of Avola, Count of Burgeto, Grand Admiral, and Grand Constable of Sicily, Governor of Milan, and Captain-General of His Catholic Majesty in Italy, fully apprised of the intolerable misery in which this city of Milan has lived and lives, by reason of bravi and vagrants, published a decree against them. He hereby declares and defines as included in this decree, to be deemed bravi and vagrants, all those who . . . whether foreign or native, having no occupation or, having one, do not exercise it . . . but rather, without a salary, or even with one, attach themselves to some member of the nobility or the gentry, an official or a merchant . . . to protect and serve him, or in truth, as can be presumed, to do injury to others . . . He ordered all of them to leave the city within six days, threatened the recalcitrant with jail, and gave the officers of the law the broadest and most indefinite emergency powers to execute the order. But the following year, on the twelfth of April, the same nobleman, observing that this City is still filled with said bravi . . . who have gone back to living as they previously had, without any alteration in their behavior or decrease in their numbers, issued another more vigorous and remarkable decree in which, among other things, he ordered:

That any person, whether of this City or foreign, whom two witnesses testify is deemed and commonly reputed to be a bravo, and bears such a title, even if he has committed no crime . . . for the sole reputation of being a bravo, without any other evidence, can by said judges and by each and every one of them be interrogated through the corda and torture . . . and even if he does not confess to any crime, can nevertheless be sent to the galleys for a three-year sentence solely for having the reputation and title of bravo. All this, and more that I have omitted, because His Excellency is resolved to be obeyed by all.

Alessandro Manzoni (1785-1873) is best known for his novel The Betrothed, which ranks among the masterpieces of world literature. It was first published in 1827 and then in 1842 in a revised edition. Manzoni was also a poet, prolific essayist, and playwright. In his life and in his writing, he was committed to the cause of Italian independence and the forging of a modern Italian identity, culture, and language. 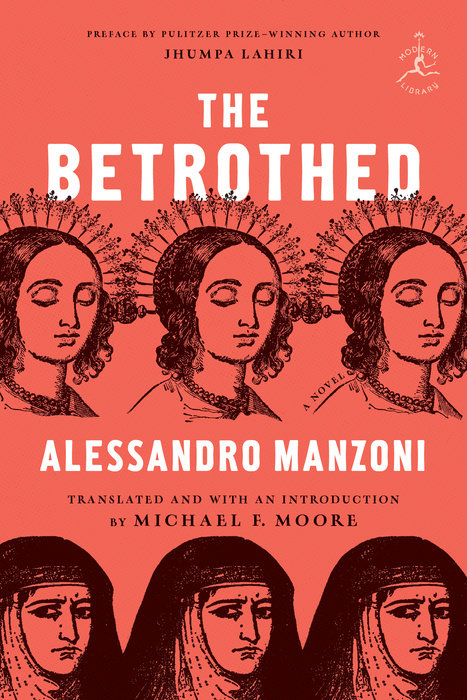