By day he made thousands of dollars a minute. By night he spent it as fast as he could. From the binge that sank a 170-foot motor yacht and ran up a $700,000 hotel tab, to the wife and kids waiting at home and the fast-talking, hard-partying young stockbrokers who called him king, here, in Jordan Belfort’s own words, is the story of the ill-fated genius they called the Wolf of Wall Street. In the 1990s, Belfort became one of the most infamous kingpins in American finance: a brilliant, conniving stock-chopper who led his merry mob on a wild ride out of Wall Street and into a massive office on Long Island. It’s an extraordinary story of greed, power, and excess that no one could invent: the tale of an ordinary guy who went from hustling Italian ices to making hundreds of millions—until it all came crashing down.

Praise for The Wolf of Wall Street

“A rollicking tale of [Jordan Belfort’s] rise to riches as head of the infamous boiler room Stratton Oakmont . . . proof that there are indeed second acts in American lives.”—Forbes

“A cross between Tom Wolfe’s The Bonfire of the Vanities and Scorsese’s GoodFellas . . . Belfort has the Midas touch.”—The Sunday Times (London)

“Entertaining as pulp fiction, real as a federal indictment . . . a hell of a read.”—Kirkus Reviews

Prologue
A Babe in the Woods

You’re lower than pond scum,” said my new boss, leading me through the boardroom of LF Rothschild for the first time.

“You got a problem with that, Jordan?”

“Good,” snapped my boss, and he kept right on walking.

We were walking through a maze of brown mahogany desks and black telephone wire on the twenty-third floor of a glass-andaluminum tower that rose up forty-one stories above Manhattan’s fabled Fifth Avenue. The boardroom was a vast space, perhaps fifty by seventy feet. It was an oppressive space, loaded with desks, telephones, computer monitors, and some very obnoxious yuppies, seventy of them in all. They had their suit jackets off, and at this hour of morning–9:20 a.m.–they were leaning back in their seats, reading their Wall Street Journals, and congratulating themselves on being young Masters of the Universe.

Being a Master of the Universe; it seemed like a noble pursuit, and as I walked past the Masters, in my cheap blue suit and clodhopper shoes, I found myself wishing I were one of them. But my new boss was quick to remind me that I wasn’t. “Your job”–he looked at the plastic nametag on my cheap blue lapel–“Jordan Belfort, is a connector, which means you’ll be dialing the phone five hundred times a day, trying to get past secretaries. You’re not trying to sell anything or recommend anything or create anything. You’ re just trying to get business owners on the phone.” He paused for a brief instant, then spewed out more venom. “And when you do get one on the phone, all you’ll say is: ‘Hello, Mr. So and So, I have Scott holding for you,’ and then you pass the phone to me and start dialing again. Think you can handle that, or is that too complicated for you?”

“No, I can handle it,” I said confidently, as a wave of panic overtook me like a killer tsunami. The LF Rothschild training program was six months long. They would be tough months, grueling months, during which I would be at the very mercy of assholes like Scott, the yuppie scumbag who seemed to have bubbled up from the fiery depths of yuppie hell.

Sneaking peaks at him out of the corner of my eye, I came to the quick conclusion that Scott looked like a goldfish. He was bald and pale, and what little hair he did have left was a muddy orange. He was in his early thirties, on the tall side, and he had a narrow skull and pink, puffy lips. He wore a bow tie, which made him look ridiculous. Over his bulging brown eyeballs he wore a pair of wire-rimmed spectacles, which made him look fishy–in the goldfish sense of the word.

“Good,” said the scumbag goldfish. “Now, here are the ground rules: There are no breaks, no personal calls, no sick days, no coming in late, and no loafing off. You get thirty minutes for lunch”–he paused for effect–“and you better be back on time, because there are fifty people waiting to take your desk if you fuck up.” He kept walking and talking as I followed one step behind, mesmerized by the thousands of orange diode stock quotes that came skidding across gray-colored computer monitors. At the front of the room, a wall of plate glass looked out over midtown Manhattan. Up ahead I could see the Empire State Building. It towered above everything, seeming to rise up to the heavens and scrape the sky. It was a sight to behold, a sight worthy of a young Master of the Universe. And, right now, that goal seemed further and further away.

“To tell you the truth,” sputtered Scott, “I don’t think you’re cut out for this job. You look like a kid, and Wall Street’s no place for kids. It’s a place for killers. A place for mercenaries. So in that sense you’re lucky I’m not the one who does the hiring around here.” He let out a few ironic chuckles.

I bit my lip and said nothing. The year was 1987, and yuppie assholes like Scott seemed to rule the world. Wall Street was in the midst of a raging bull market, and freshly minted millionaires were being spit out a dime a dozen. Money was cheap, and a guy named Michael Milken had invented something called “junk bonds,” which had changed the way corporate America went about its business. It was a time of unbridled greed, a time of wanton excess. It was the era of the yuppie.

As we neared his desk, my yuppie nemesis turned to me and said, “I’ll say it again, Jordan: You’re the lowest of the low. You’re not even a cold caller yet; you’re a connector.” Disdain dripped off the very word. “And ’til you pass your Series Seven, connecting will be your entire universe. And that is why you are lower than pond scum. You got a problem with that?”

“Absolutely not,” I replied. “It’s the perfect job for me, because I am lower than pond scum.” I shrugged innocently.

Unlike Scott, I don’t look like a goldfish, which made me feel proud as he stared at me, searching my face for irony. I’m on the short side, though, and at the age of twenty-four I still had the soft boyish features of an adolescent. It was the sort of face that made it difficult for me to get into a bar without getting proofed. I had a full head of light brown hair, smooth olive skin, and a pair of big blue eyes. Not altogether bad-looking.

But, alas, I hadn’t been lying to Scott when I’d told him that I felt lower than pond scum. In point of fact, I did. The problem was that I had just run my first business venture into the ground, and my self-esteem had been run into the ground with it. It had been an ill-conceived venture into the meat and seafood industry, and by the time it was over I had found myself on the ass end of twenty-six truck leases–all of which I’d personally guaranteed, and all of which were now in default. So the banks were after me, as was some belligerent woman from American Express–a bearded, three-hundred-pounder by the sound of her–who was threatening to personally kick my ass if I didn’t pay up. I had considered changing my phone number, but I was so far behind on my phone bill that NYNEX was after me too.

We reached Scott’ s desk and he offered me the seat next to his, along with some kind words of encouragement. “Look at the bright side,” he quipped. “If by some miracle you don’t get fired for laziness, stupidness, insolence, or tardiness, then you migt actually become a stockbroker one day.” He smirked at his own humor. “And just so you know, last year I made over three hundred thousand dollars, and the other guy you’ll be working for made over a million.”

Over a million? I could only imagine what an asshole the other guy was. With a sinking heart, I asked, “Who’s the other guy?”

Sweet Jesus! I thought. Only speak when spoken to, you nincompoop! It was like being in the Marines. In fact, I was getting the distinct impression that this bastard’s favorite movie was An Officer and a Gentleman, and he was playing out a Lou Gossett fantasy on me–pretending he was a drill sergeant in charge of a substandard Marine. But I kept that thought to myself, and all I said was, “Uh, nothing, I was just, uh, curious.”

“His name is Mark Hanna, and you’ll meet him soon enough.”

With that, he handed me a stack of three-by-five index cards, each of them having the name and phone number of a wealthy business owner on it. “Smile and dial,” he instructed, “and don’t pick up your fucking head ’til twelve.” Then he sat down at his own desk, picked up a copy of The Wall Street Journal, and put his black crocodile dress shoes on the desktop and started reading.

After graduating from American University, Jordan Belfort worked on Wall Street for ten years. He currently lives in Los Angeles with his two children. 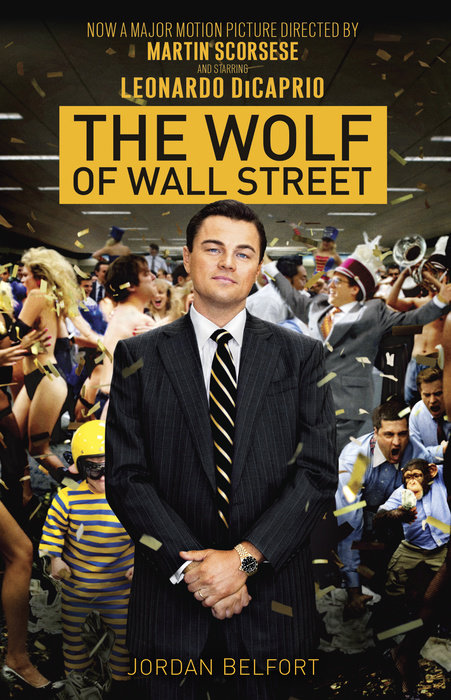