Throughout history, the Balkans have been a crossroads, a zone of endless military, cultural, and economic mixing and clashing between Europe and Asia, Christianity and Islam, Catholicism and Orthodoxy. In this highly acclaimed short history, Mark Mazower sheds light on what has been called the tinderbox of Europe, whose troubles have ignited wider wars for hundreds of years. Focusing on events from the emergence of the nation-state onward, The Balkans reveals with piercing clarity the historical roots of current conflicts and gives a landmark reassessment of the region’s history, from the world wars and the Cold War to the collapse of communism, the disintegration of Yugoslavia, and the continuing search for stability in southeastern Europe.

An excerpt from The Balkans

Over millions of years, the play of the earth's tectonic plates pushed up a series of mountain ranges in the Mediterranean along the geological frontier between Europe and Africa. Stretching from the Iberian peninsula in the west to the ranges of southeastern Europe in the east, they eventually link up with the mountain chains of Asia Minor and central Asia. To their north, the great Eurasian lowlands extend with scarcely a break from Calais to the Urals. There rainfall is abundant, arable land is plentiful and numerous navigable rivers connect the interior with the sea. To the south, it is a different story: good farming land becomes scarcer, the ground is more broken and rainfall less frequent.

Unlike the mountain chains guarding the necks of the Iberian and Italian peninsulas, the Balkan ranges offer no barrier against invasion, leaving the region open to easy access and attack from north and east. On the other hand, their irregular formation hinders movement between one valley and the next. Communication is often easier with areas outside the peninsula than between its component parts, so that Dubrovnik, for instance, has had closer ties for much of its history with Venice than with Belgrade. In this way, mountains have made commerce within the region more expensive and complicated the process of political unification.

The effect of mountains is felt everywhere from the skies to the sea. Rain shadows deprive much of the peninsula of the moisture found in Europe's continental climatic zone. Kola&szlig;in in Montenegro has an average annual rainfall of 104 inches, while a little way east, Skopje in Macedonia has only 18 inches per year. A tiny coastal strip running down the Dalmatian coast to western Greece enjoys sufficient rain to soften the impact of the harsh Mediterranean summers. On Corfu the vegetation is luxuriant; the Cyclades, by contrast, are parched and dry. The former is able to support itself, the latter--as wartime starvation revealed--relies on food imports to keep going. In general, the annual precipitation east of the mountains is at least 10 to 20 inches less than farther west, leading to recurrent droughts even in the fertile plains. "A dreary
arid sandy level" was how the Vardar valley presented itself to an intrepid Englishwoman crossing it in the mid-nineteenth century. "For many miles the country is entirely without trees."

In the Mediterranean climatic zone, watercourses dry up during the summer, leaving rocky beds and canyons. The result is parched, broken upland with scarce water supplies--a harsh environment for human habitation that is suited chiefly to abstemious plants. "A curious feature in the mountains began to make itself painfully felt," noted Arthur Evans in 1875, walking across the Hercegovinan karst. "There was no water." He describes "a prospect of desolation. . . . In every direction rose low mountains, mere heaps of disintegrated limestone rock, bare of vegetation . . . aptly compared to a petrified glacier or a moonscape." Where summer rain permits, mountain forests and woodland--with beeches, oaks and sweet chestnuts--testify to perennial supplies of running water. Even so, the peninsula suffers drought more than anywhere else in Europe, except southern Spain and Malta, and deaths caused by water scarcity were reported from Montenegro as late as 1917.

Not everywhere in the Balkans is as dry as this. In the Rhodope mountains, rivers flow throughout the year; the Albanian uplands remind travelers of Alpine meadows. Farther east, large parts of former Yugoslavia, Romania and northern Bulgaria enjoy something closer to a central European weather pattern. Long cool winters and heavy rains nourished the impenetrable Shumadija, which once covered much of lowland Serbia in dense oak forest. "Endless and endless now on either side the tall oaks closed over us," wrote Alexander Kinglake in Eothen, describing a ride toward Constantinople in 1834. "Through this our road was to last for more than a hundred miles."

To the east, the Danube estuary shares climatic features with the southern steppes and the Black Sea, though it suffers from a lack of rainfall where the rain shadow of the Carpathians makes itself felt. Mountains make the contrast between Mediterranean and these northern and eastern weather zones a sudden one, as anyone who has climbed the road from Kotor on the Dalmatian coast to the old Montenegrin capital Cetinje will know. "The climate had suddenly changed," wrote a traveler after having traversed the Balkan mountains in Ottoman Bulgaria. "A warmer air surrounded us. The whole of European Turkey, from the southern declivities of the Haemus, lies in a delightful climate, which can display all the charms of the tropics as well as the vigor of the higher latitudes, without suffering their disagreeable effects." For this sun-deprived northerner, not even the plague was enough to overshadow his sense of warmth and well-being as he came closer to the Mediterranean.

Rivers are generally crucial for prosperity because until modern times transportation was easier and cheaper by water than by land. Some historians explain the "European miracle" by the abundance of navigable waterways that connect coasts and the interior. But river systems that compare with the Rhine and Rhone in west Europe, or the Vistula-Dnieper trade route in east Europe, do not exist in the southeast of the continent. Balkan rivers, when more than winter torrents, descend too rapidly to be navigable, or else they meander idly in curves and loops away from the nearest coastline. Important rivers such as the Sava, the Vardar and the Aliákmon are thus of limited use for trade and communications. "Nothing can be more striking," wrote Henry Tozer in 1867 as he traveled south down the Vardar, "than the entire absence of towns along this great artery of internal communication. . . . The river itself is a fine sight when it flows in one stream, but . . . the work of making it navigable would now be a difficult one." Even the Danube has served the region less well than it might, blocked from the Mediterranean by the mountains and then heading north--in quite the wrong direction from the merchant's point of view--before reaching the Black Sea. Before the Second World War, the lower Danube iced over for four to five months of the year. And before the early nineteenth century, while fought over by the Russians and the Turks, it was scarcely used for commerce at all; trade caravans between the Balkans and central Europe went by road, while travelers and diplomats en route to the Ottoman capital frequently left the river halfway along its course and completed their journey overland instead.

Mark Mazower is the Ira D. Wallach Professor of History at Columbia University. He is the author of Governing the World, Hitler’s Empire and The Balkans: A Short History, winner of the Wolfson Prize for History, among other books. He lives in New York City. 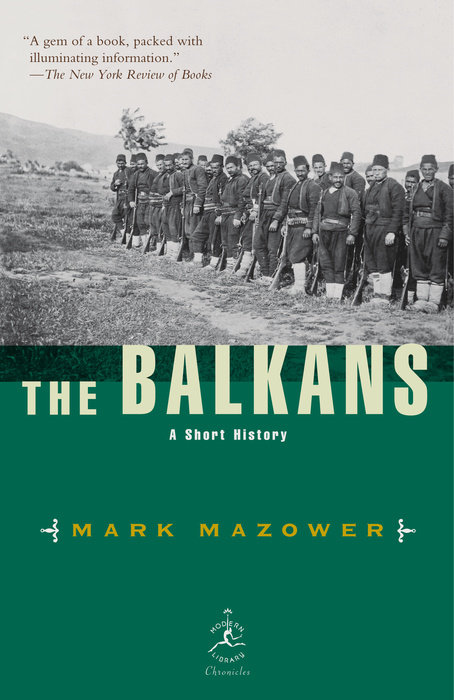