In the idyllic town of Lake Esther, Florida, little is allowed to ripple the surface calm—which is just the way Sheriff Kyle Deluth likes it. But when Deluth "removes" two young children from the local school because of the color of their skin, the sheriff's senseless act of cruelty sparks a fire under the women of Lake Esther that will scorch the lives of all involved. In their pursuit of justice, an indomitable heiress, a revered journalist, and a fading Southern Belle will forge an unlikely alliance across the racial divide. One that will change the face of the town—and their lives—forever.

Deeply moving and peopled with a rich cast of characters, Susan Carol McCarthy mines the hotbed of racism with insight and compassion. Bittersweet, inspirational and wholly compelling, True Fires confirms McCarthy’s reputation as a dazzling new voice in probing real-life events to interpret the injustices of our past.

An excerpt from True Fires

Outside the wall of windows, the unrelenting flatness sets Daniel’s mind to dreaming, sketching mountains, ridges, and rain gullies in the wasted space between the sparse Bermuda grass and the vast staring-down sky. Suddenly, a flare of light—blazing sun careening off polished car chrome—yanks Daniel’s eyes out the open doorway. The light glares in the face of the skinny boy on his left and the girl with the yellow hair in front of him. As the two-toned car comes to a stop in front of the school office, the skinny boy points; the girl gawks. And the two of them whisper, not to Daniel, never to him, “The Sheriff, K. A. DeLuth,” their tones at once fearful and reverential.

Haw, Daniel scoffs inside his head, y’all call that a Sheriff in Floridy? Looks like he couldn’t tell a still from a smudge pot, and wouldn’t bother dirtyin’ his boots to try. Up home, Sheriff Jim is Pap’s fifth cousin and he’s got two stills. One to keep, he says, and one to share, when the revenuers come through, needin’ somethin’ to bust up. That still’s been moved around and busted up more times than anyone can count. Sheriff Jim brags he’s got the least still still in Avery County!

Daniel snickers at ol’ Jim’s familiar joke but stops as the skinny boy and the yellow-haired girl turn on him, their flat eyes hard with disgust.

He’s been at this school ten days now, but nonetheless, the depth of their contempt surprises him. The first two days, his fellow fifth graders had seemed entertained, charmed even, by his tales from up home in Pigeon Ridge, North Carolina.

“Pigeon Ridge? You got lots of pigeons up there?” they’d asked.

“Nary one.” He’d grin. “But we got more ravens than you kin shake a stick at. Know why the raven’s so black? Th’ Ol’ Cher’kee says he got burned black, stealing fire from heaven for the folks on Grandfather Mountain.”

Oh, they’d liked him fine then. But, the day after that, the girl with the hair as bright and shiny as a river trout turned on him, her blue eyes squinty, her nose squinched, and asked, real loud, “Don’t you have anything else to wear?” That question and his answer turned everything sideways. The grins of the others were gone. Now, their eyes either glittered with bone-naked revulsion or skittered off elsewhere as if he weren’t even there.

Daniel the Lone Ranger he’d become, laying low behind a mask of amused mockery he didn’t really feel, feeding the hungry rumble of his homesickness constant helpings of memory and imagination.

Outside, the Sheriff’s door slams shut. He’s got a fancier car than ol Jim, I’ll give ’im that. And, Daniel notes as the big man hitches up his broad belt, an even fancier gun.

The sight of the Sheriff’s pistol with its pearly white handle sends the boy’s mind wandering. In his lap, his palms fold, one up, one down, several inches apart. In his mind, he grasps his own little bolt-action .22, its barrel ice cold as he crunches through the crisp freedom of the October woods; brown nut grass, stiff with first frost, crumbling beneath his feet. Here, sun slants bright through the half-bare hickory grove. And just there, the tail of a fat fox squirrel flickers. Daniel stops, takes aim, lets the squirrel back his way round the trunk into full view, then, Bam! Got him! Easy pickin’s for a lover of Mam’s squirrel burgoo.

Mam. Without warning, her long skinny face swells up in front of him: grinning at a tow sack heavy with a dozen skinned pink squirrels, grimacing at the pain eating up her innards, composed peaceful-like by old Miz Sary on the pine plank she called her cooling board. This last memory of his mother, colorless except for the strange spots of rouge somebody smudged on her cheekbones, tightens the muscles around his sore heart. All at once, Mam’s pointy fingers, never still, ever impatient with any sort of dillydallying, poke him sharply in the shoulder.

“Sammy,” the harsh whisper says. Mam never called him that. “Sammy! Teacher want you, up to the front,” the grubby boy behind him says.

Dazed, Samuel Daniel Dare stands and shuffles his oversize feet between the desks toward the front. He feels, like pinpricks, the other children’s eyes on his plaid shirttail. He drops his chin hastily, hoping they can’t see, don’t notice the backs of his big ears flushing darkly red. Their sharp laughter tells him they can, and do.

Sheriff K. A. DeLuth grabs his hat off the other seat then pauses to center his belt buckle between the stiff parallel creases in his shirt and pants legs. “A fine figure of a man,” the President of the Ladies Auxiliary called him, meaning his six-foot, six-inch height which, with his hat on (an authentic Texan ten-gallon, a gift from the Governor) and the heels of his size-thirteen boots, grows to damn near seven feet tall.

SHERIFF K. A. DeLUTH. The gold letters on his car door glint his arrival. To the voters who will, no doubt, reelect him next month for an unprecedented third term, the ballot reads Sheriff Kyle Ambrose (K. A.) DeLuth, Incumbent. But among his powerful friends, the citrus growers and cattlemen who own and run this county, and among those who dare cross them, he’s Kick Ass. The Honorable Sheriff Kick Ass DeLuth. He nods, relishing the feel of his hat on his head, the velvety smooth rim of the brim. At your service.

This place hasn’t changed a bit, he thinks, ducking his head to enter the school office. Same damn chairs, same old prune face behind the counter, must be—what? seventy-something by now.

“Good afternoon, young lady,” he says, turning on the charm, removing his hat in a practiced arc.

“Kyle DeLuth! Last time I saw you in here, you were on the receiving end of a rather large piece of pine!” Miss May White’s attempted grin cross-stitches the folds of her ancient face. “You sure have done well for yourself.”

“Thank you, Miss May. And you haven’t changed a bit. Boss man in?”

“In for you, I’ll bet. Edward,” she calls loudly into the open door six feet away, “you here for Kyle DeLuth?”

DeLuth passes through the swinging half door next to the counter, drops his big hat in the center of Miss May’s desk, and extends his right hand to grip the principal’s squat little paw.

“Missed you at Rotary today,” the Sheriff says, settling into one of the uncomfortably small wooden chairs in front of the principal’s desk, adjusting the crease in his crossed pants leg.

“Damn district reports, due end of the week,” Cantrell says and shakes his bald head at the paperwork blanketing his desk. “What can I do you for?” he asks quickly.

The Sheriff notes the hint of anxiousness in Cantrell’s voice, views it as the respect that he considers his due.

“Sat next to Clive Cunningham at lunch. You got the last of his kids here in the fifth grade, sweet little thing named Caroline, pick of ol’ Clive’s litter?”

“Sure do. ‘A’ student, too.” Cantrell says it a little too heartily, clearly curious why a man of Clive Cunningham’s status would involve the Sheriff in a school problem.

“Well, Caroline’s come home complaining about some boy in her class. New kid, name of Dare? Not that he’s bothered her or anything, but seems he’s a little on the too-tan side. Clive’s driven by the playground, given him the once-over, thinks he might be some sort of high-toned mule-otto, tryin’ to pass for white.”

Cantrell’s big chair squeaks as he shifts his bulk forward, alert now. “I know the boy you mean. He and his little sister are new—week ago Monday, October sixth. But they got redheaded cousins who’ve been here a year already.”

“Well,”—DeLuth stretches a foot to admire the mirror-sharp sheen on his boot toe—“with all this nonsense coming out of the Supreme Court, and you know better ’n I do the Governor’ll close the schools before he’ll integrate, we got to keep an eye out for any sort of left-wing foolishness. I told Clive I’d check this kid out myself, that is,”—DeLuth pauses to make sure Cantrell realizes he’s being thrown a bone—“if it’s all right with you.”

“Of course.” The principal nods hastily. “He’s in Sarah Burch’s room. Want me to call him out?” He’s already swiveling toward the P.A. system on the table beside his desk.

The Sheriff shakes his head, rising up and out of the too-small chair. “You got your hands full here, Ed. I’ll just stroll over there, take a look-see and be on my way. Fifth grade still where it used to be? And the sister’s in—what? First grade? Second?”

“Second,” Cantrell says, standing awkwardly. “Sure you don’t want me to come?”

“Naw, probably nothing anyway,” DeLuth says, waving him back into his seat.

“Haven’t changed a bit,” he winks at Miss May as he swings his hat off the rack behind her desk.

Susan Carol McCarthy is the award-winning author of three novels, Lay That Trumpet in Our Hands, True Fires, and A Place We Knew Well, and the nonfiction Boomers 101: The Definitive Collection. Her debut novel received the Chautauqua South Fiction Prize and has been widely selected by libraries and universities for their One Book, One Community and Freshman Year Read programs. A native Floridian, she lives in Carlsbad, California. 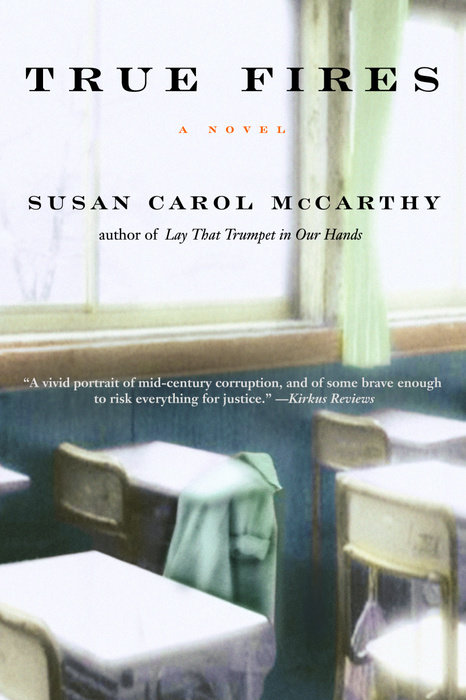