In this amazing and at times ribald story, Laton McCartney tells how Big Oil handpicked Warren G. Harding, an obscure Ohio senator, to serve as our twenty-third president. Harding and his “oil cabinet” made it possible for cronies to secure vast fuel reserves that had been set aside for use by the U.S. Navy. In exchange, the oilmen paid off senior government officials, bribed newspaper publishers, and covered the GOP campaign debt. When news of the scandal finally emerged, the consequences were disastrous. Drawing on contemporary records newly made available to McCartney, The Teapot Dome Scandal reveals a shocking, revelatory picture of just how far-reaching the affair was, how high the stakes, and how powerful the conspirators–all told in a dazzling narrative style.

An excerpt from The Teapot Dome Scandal

1 A Reversal of Fortune

“The Oil King of Oklahoma” came back to the Randal Hotel and flopped down on the bed in room 28 without undressing. It was just after 6:00 p.m. Jake Hamon had been drinking most of the afternoon. He needed a nap if he was going to make supper.

Clara Hamon was in the adjoining room when Jake came in. She listened as he dropped his keys and change on the bureau and collapsed on the bed. She and Jake had been together ten years. They shared the Hamon name but were neither married nor related. A few months after they met, Jake had paid his nephew Frank Hamon $10,000 to marry Clara and then sent him off on the first train to California. The marriage had been a “blind.” Jake wanted Clara for himself. Sharing the Hamon name made it easier for them to travel together, registering in hotels as Jake and Clara Hamon.

Jake had left his wife and two children for Clara. A clerk in a dry goods store, Clara had been seventeen at the time, eighteen years Jake’s junior. With her wavy brown hair modestly done up, her deep blue eyes, and her reluctance to wear rouge, she looked more like an attractive young schoolteacher than Jake Hamon’s mistress. After they met, Jake offered her a job, sent her to stenography school, and took her out to the oil fields with him when he’d been wildcatting on the Osage and up on the Panhandle. Clara was smart and every bit as ambitious as Jake. For the past few years, she’d been acting as his business partner and adviser. “He was . . . a masterful man,” Clara said. “He dominated me from the first time I looked into his eyes and noted the strange glint in them.”

Now Jake had hit the big time, the jackpot of all jackpots. Not even in his wildest dreams could he have imagined the good fortune that had recently befallen him. Until six months ago, Jake had been a big fish in a pond that was far too small to accommodate his vast ambitions. “The Oil King of Oklahoma,” the newspapers called him. The raucous, hard-drinking Hamon had graduated from the Law Department of the University of Kansas, then set off for Indian Territory (present-day Oklahoma), where he clerked in a store in Newkirk. When the Kiowa-Comanche country opened up to settlement, Jake went in with the first rush of new settlers to Lawton, then an Indian town. Over the next few years, he had been named Lawton’s first city attorney and chairman of the Oklahoma Republican Territorial Committee; made money building a railroad with John Ringling, the circus impresario; and then got into oil, where the real money was.

With the 1920 presidential election coming up, Jake decided to gamble almost everything he had on backing a long shot in the 1920 Republican presidential convention, Senator Warren G. Harding from Ohio. Hamon borrowed nearly $1 million from the National City Bank of New York (today’s Citibank), using his substantial oil holdings as collateral. He took his bankroll to Chicago and spread his money around where it counted, buying delegates and influencing the people who needed influencing. Working in tandem with Harding’s campaign manager, Harry Micajah Daugherty, Hamon got Warren Harding the Republican presidential nomination.

Six months later, Warren Harding was elected president of the United States. Going into the convention, Harding had been a forty-to-one shot. Hamon agreed to back him on the condition that if he was nominated—and made it to the White House—Harding would appoint Hamon secretary of the interior. That would give Hamon control of the Teapot Dome Naval Reserve in Wyoming, an oil supply potentially worth several hundred million dollars—1920 dollars—a bonanza so rich that it was almost beyond comprehension. Of course, Jake wasn’t going to pocket it all. He agreed to lease out the government fields to some of his friends in the oil business, who in turn would kick back a third of the take to Jake.

Hamon had a fortune within his grasp that could put him in the same league as old John D. Rockefeller, the richest man in America. And Jake already knew what he was going to do with a big chunk of the money—make his son president of the United States. If Hamon and Big Oil could get an empty suit like Harding elected, putting a bright, ambitious kid like Jake Jr. in the White House would be a breeze when the time came. Of course, there was a caveat regarding the Interior post. Initially, Jake hadn’t thought the matter would prove a problem, but he’d been badly mistaken. When Hamon and Harding first met in New York before the convention, they discovered to their mutual amazement that their wives were related—second cousins, in fact. This, of course, had given Jake a big “in” with Harding, but it also presented a problem. Once “the Duchess,” as Harding called his wife, Florence, got the lowdown on Jake and Clara, she insisted that Jake get back with his wife before coming to Washington. Florence Harding wasn’t going to allow her cousin’s husband to come to Washington accompanied by some twenty-seven-year-old floozy.

Clara had to go.

Harding spelled out the demands in a letter Jake had brought back from the Chicago convention, packed in his trunk. It stated unequivocally that Hamon had to resume his legal marital relations before he could be considered for an appointment. Not that Harding cared one way or another. He chased anything in a skirt; that was no secret. But Florence was a tough old bird. There was no getting around her.

Of course, Jake waited until after Harding won the election to break the bad news to Clara. No point in getting her all riled up until he was sure Harding had the job. Clara wasn’t the kind of woman you wanted to give up unless you had a good reason, and Jake had two of the best—money and power. Jake would be generous in settling with her, of course. He’d already given Clara a couple of oil wells from which she received small royalties. He’d instructed his business manager, Frank Ketch, to work out a reasonable agreement. Clara would walk away from their ten-year relationship a well-to-do woman with enough to put her younger brother, Jimmy, through college and take care of her ailing father, J. T. Smith, down in El Paso. Back a decade or so ago, J.T. had come after Jake with a pistol for having absconded with poor innocent Clara. Fortunately, the sheriff managed to disarm him before he could do any damage.

Old J.T. had a nasty temper, but then so did Clara, though she had seemed calm enough when Jake told her that he had to leave her, that he was going back to his wife. Icy calm, in fact. He broke the news on November 7 and gave Clara three weeks to clear out, explaining that his wife and family would be arriving at the end of the month in Ardmore.

God knows, Jake told Clara, he hadn’t wanted it to end this way, not after ten years, didn’t know what he’d do without her. Jake wanted nothing more than to bring Clara with him to Washington, take her to black-tie dinners at the White House and formal balls, have her meet heads of state, even royalty, but the president-elect of the United States had insisted. Either get back with his wife or forget about the Interior job. What choice did he have?

The day after Jake broke the news, Clara went out and bought a .25-caliber pistol. That, Jake hadn’t known. What he knew was that Clara had started packing and seemed resigned to the breakup. It was only a matter of a few days now before she’d be off. In fact, when he got back to the hotel on the evening of November 21, he half expected that she would have already gone. Instead, she came into Jake’s room from the adjoining room, her room, after he toppled onto the bed. He was awake, if a little woozy from the whiskey. It was nearly dark. Clara came over to the bed and put her left hand on Jake’s forehead as if to stroke it and with her right shot him in the chest with the .25-caliber pistol. Pop—one shot that pierced his ribs and lodged in his liver.

Jake jumped up from the bed, knocked the gun from Clara’s hand before she could get off a second round, and then began crawling around the floor on his hands and knees, clutching the chest wound with one hand and looking for the tiny pistol with the other in the near darkness. Finally he retrieved the gun, put it in his pocket, and staggered to his feet to confront Clara.

“Clara, you hit me,” Jake said, looking at the blood that had begun to soak through his vest and now covered his hand.

Clara would later claim that she pleaded with Jake to lie back down on the bed. She wanted to call for Dr. Walter Hardy, the town doctor, but Jake was determined to walk to the nearby Hardy Sanitarium himself. “Let’s call it an accident,” he said as he staggered out the door. That suited Clara just fine. She wanted Jake Hamon dead, and she wanted it to appear as if he’d shot himself while cleaning his pistol. She told her driver so the following day.

Laton McCartney is the author of the national bestseller Friends in High Places: The Bechtel Story–The Most Secret Corporation and How It Engineered the World, The Teapot Dome Scandal: How Big Oil Bought the Harding White House and Tried to Steal the Country, and Across the Great Divide: Robert Stuart and the Discovery of the Oregon Trail. McCartney has written extensively on business, finance, and politics for many national magazines. He and his wife, Nancy, divide their time between Wyoming and New York City. 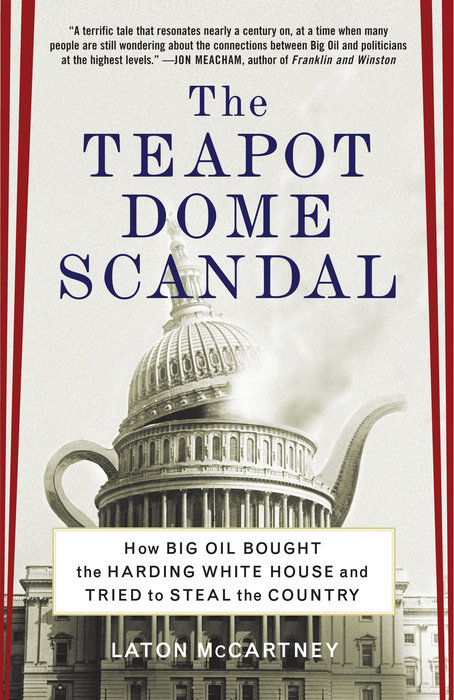