A contemporary prose rendering of the great medieval French epic, The Song of Roland is as canonical and significant as the Anglo-Saxon Beowulf. It extols the chivalric ideals in the France of Charlemagne through the exploits of Charlemagne's nephew, the warrior Roland, who fights bravely to his death in a legendary battle. Against the bloody backdrop of the struggle between Christianity and Islam, The Song of Roland remains a vivid portrayal of medieval life, knightly adventure, and feudal politics. The first great literary works of a culture are its epic chronicles, those that create simple hero-figures about whom the imagination of a nation can crystallize, observed V. S. Pritchett.

The Song of Roland is animated by the crusading spirit and fortified by national and religious propaganda. This edition features W. S. Merwin's glowing, lyrical translation.

An excerpt from The Song of Roland

Charles the King, our great emperor, has stayed seven whole years in Spain and has conquered the haughty country as far as the sea. Not a single castle resists him any longer; not one wall has yet to be broken nor one city taken, except Saragossa, which is on a mountain and is held by King Marsiliun, who does not love God. Marsiliun serves Mahomet and prays to Appolin. But he cannot prevent harm from overtaking him.

II
King Marsiliun, in Saragossa, has gone out into the shade of an orchard. He reclines on a bench of blue marble. There are more than twenty thousand men around him. He summons his dukes and his counts:
Lords, hear this, regarding the scourge which has come upon us. The emperor Charles has come to this country from sweet France to destroy us. I have no host with which to offer him battle, nor such an army as could crush his. Give me counsel, my men of wisdom, to save me from death and shame!

None of the pagans says a word in reply, except Blancandrin, from the Castle of Val-Fonde.

III
Blancandrin was one of the wisest of the pagans. He was well endowed with the kind of courage which befits a knight, and he had shrewdness and judgment to bring to the aid of his lord. And he said to the King: "Do not give way to alarm! Send promises of faithful service and great friendship to Charles, the proud, the haughty. Send him bears and lions and dogs, seven hundred camels and a thousand new-molted falcons, four hundred mules weighed down with gold and silver, fifty wagons for him to range in a wagon train. He will be able to pay his mercenaries well. Tell him that he has made war long enough in this country, that he would do well to return to Aix, in France. Tell him that you will meet him there at Michaelmas and bow to the law of the Christians and become his vassal, in all honor and good faith. If he demands hostages send him ten or twenty to gain his confidence. Let us send the sons of our own wives. I will send my own son, even at the risk of his life. It is far better that our children should lose their heads than that we should forfeit our honor and possessions, or be reduced to begging."

IV
Blancandrin said: "I will swear by this right hand, by this beard which the wind flutters at my breast, that you will see the French army break camp at once. The Franks will go back into France, to their country. When each man has returned to the place which is dearest to him, at Michaelmas Charles will hold high court in his chapel at Aix. The day will arrive, the allotted time will run out, and Charles will receive no word from us, no tidings. The King is proud, and he has a hard heart. He will command them to take our hostages and strike off their heads. It is far better that they should lose their heads than that we should forfeit serene lovely Spain or endure suffering or distress!" The pagans say: "Perhaps he is right."

V
King Marsiliun has brought his council to an end. He summons Clarin of Balaguet, Estamarin and his friend Eudropin, and Priamun and Guarlan the Bearded, and Machiner and his uncle Maheu, and Jouner, and Malbien from across the sea, and Blancandrin, to speak in his name. He calls to one side ten of the wiliest and most treacherous.

"My lords, barons, you will go to Charlemagne. He is laying siege to the city of Cordres. You will approach him carrying olive branches in your hands to signify peace and humility. If you are cunning enough to arrange an agreement for me, I will give you as much gold and silver as you could wish for, and as much land, and as many possessions."

The pagans answer: "We are more than satisfied!" 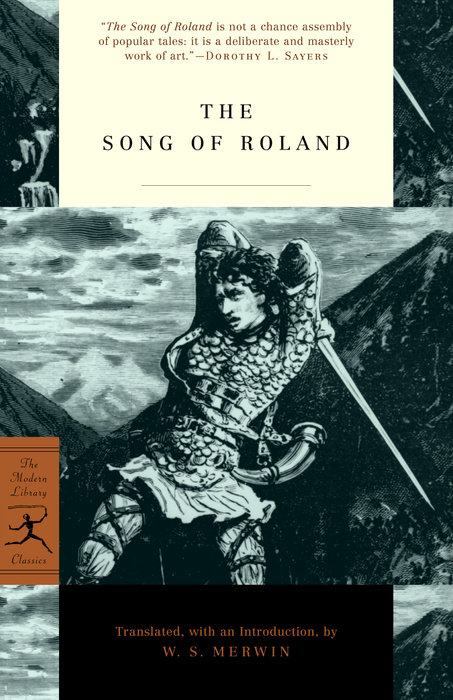