A Life-Saving Guide to the Myths and Realities of Alcoholism

The now-classic guide to alcoholism returns with new, enlightening research that confirms the revolutionary ideas first trailblazed by this book in a time when such theories were unheard of—now featuring a new foreword, new resources, and the same reliable insights and easy-to-read style.

Ten of millions of Americans suffer from alcoholism, yet most people still wrongly believe that alcoholism is a psychological or moral problem that can be “cured” once the purported underlying psychological problems or moral failings of the alcoholic are addressed. Based on groundbreaking scientific research, Under the Influence examines the physical factors that set alcoholics and non-alcoholics apart, and suggests a bold, stigma-free way of understanding and treating the disease of alcoholism.

You’ll learn:
• How to tell if someone you know is an alcoholic.
• The progressive stages of alcoholism.
• How to help an alcoholic into treatment and how to choose the right treatment program.
• Why diet and nutritional therapy are essential elements of treatment.
• Why frequently prescribed medications can be dangerous for alcoholics.
• How to ensure a lasting recovery.

An essential resource for anyone hoping to better understand the nature of alcoholism—whether you are looking to support a loved one or learning how to best care for yourself—it’s no wonder this innovative work has been hailed as “the best book ever written on alcoholism” (AA Beyond Belief). This special updated edition of Under the Influence will continue to earn its standing as a classic in the alcoholism field for years to come.

An excerpt from Under the Influence

Every human soul is worth saving; but . . . ​if a choice is to be made, drunkards are about the last class to be taken hold of.

When he drinks, he has problems. His car is scarred with dents and scratches from his erratic driving. He sometimes “forgets” what he did while he was drinking, and the next day he tries to piece together the night before. On one drunk, he broke his leg jumping over a fence. His wife takes a lot of verbal and emotional abuse when Bob drinks. After a New Year’s Eve party, Bob was driving, drunk, and his wife asked him to let her drive. Furious, he stopped the car, leaned across her, opened the door, and pushed her out. Then he sped away, leaving her stranded on the highway.

After these episodes, Bob feels guilty and ashamed and vows to cut back on his drinking. He begs his wife’s forgiveness, and together they try to understand what bothers him when he is drinking and why he cannot just stop after a few drinks. Bob thinks the problem is psychological. He tells his wife that his career is difficult and demanding; the ups are euphoric, he explains, but the downs are devastating. Anyone would drink in this work, he tells her; it just comes with the territory. His wife blames the heavy drinking and violent behavior on his upbringing. His mother was a big drinker and set a bad example; furthermore, she never gave her kids any love or affection. Bob is just insecure, his wife insists. He needs understanding and tender loving care. She knows that he is a sensitive, loving man, and she believes she can be most helpful by supporting and helping him through the rough times.

Both Bob and his wife believe the drinking is just a symptom of some deep insecurity or emotional hang-up. Once Bob becomes successful and their financial situation is secure, they believe, he will have the confidence to work his problems out more rationally. “It is just a temporary problem,” they agree.

Bob is an alcoholic. His wife, doctor, friends, and relatives do not know that he is addicted to alcohol. He does not know it either, although he is often afraid that something terrible is happening to him. He worries that he may have some kind of mental health problem, although he struggles with these fears by himself, convinced that once he admits them they will be confirmed. He is deeply ashamed of himself and full of guilt about his inability to control his drinking and keep his promises to his wife.

What will happen to Bob? If he is like most of the 26 million alcoholics in the United States, his children will be ashamed of him, his friends will shun him, his doctors will despair of helping him, and his wife will finally leave him. His personality will be gradually distorted, his talents and intelligence wasted, and his integrity and self-respect eroded. He will take tranquilizers and sedatives in an effort to combat his depression and anxiety. He will switch doctors, hoping to find one who can tell him what is wrong. He will see a psychiatrist and spend countless hours and thousands of dollars trying to dig up the roots of his unhappiness. He will be reprimanded by his boss, and eventually he will be fired.

Throughout it all, he will drink. He will try to stop drinking, and sometimes he will succeed. But he will shake, sweat, and feel sick to his stomach when he stops drinking. After a week or a month, he will start drinking again. As he continues to drink, these withdrawal symptoms will get worse, and he will drink more, and more often, to relieve his pain.

As his disease progresses, his blood pressure will escalate and his depression will increase. The drinking will not stop but instead will become more and more of a problem, causing difficulties at home, on the job, with the children. His heart, liver, and nervous system will begin to function less effectively. He will be hospitalized from time to time for various complications caused by his excessive drinking.

He will have numerous accidents—falling down the stairs or off a ladder, driving his car into a tree, overdosing on sleeping pills or tranquilizers—and one of these accidents may kill him. He may commit suicide. Or he may eventually die from acute alcohol poisoning, cirrhosis of the liver, pancreatitis, heart or respiratory failure, pneumonia, infections, or cancer.

Most alcoholics will die an average of twenty-nine years earlier than their nonalcoholic friends.1 Most will never receive treatment for their primary disease, alcoholism. Their death certificates will typically state heart failure, accident, suicide, or respiratory failure as the cause of death. The chances are that no one—physician, social worker, family member, or alcoholic—will diagnose the cause of the problem as addiction to alcohol.

While tens of thousands of alcoholics like Bob die every year, scientists, physicians, and professional alcoholism specialists disagree, often heatedly, about the nature of the disease that destroys them. Those involved in trying to understand alcoholism—and that includes psychologists, psychiatrists, physicians, nutritionists, biologists, neurophysiologists, biochemists, anthropologists, and sociologists—operate in a confused and chaotic system where prejudiced opinion, fierce competition for resources, and deep distrust abound. Professionals argue about the causes of the disease, how it should be treated, and how it can be prevented.

The problem is deeper than a superficial disagreement among scholars. Violent feeling lurks here. Hatred, distrust, and prejudices abound. Profound insecurities and long-standing feuds smolder. Each scientist or research team appears to be working in a narrow compartment, oblivious of work conducted by others outside their special field. Scientists in the laboratory accuse the clinicians, who work directly with alcoholics, of ignoring scientific data and conforming to old-fashioned and outdated treatment methods. Clinicians accuse the scientists of dismissing all firsthand experiences with alcoholics as “nonscientific” and therefore invalid. Neuroscientists argue with social scientists about the causes of alcoholism while researchers from all disciplines accuse government bureaucrats of pandering to fads and special interests.

These deep and often painful schisms were once again thrust into the spotlight at the 2015 Nobel Conference titled “Addiction: Exploring the Science and Experience of an Equal Opportunity Condition.”2 Panelists from various academic disciplines including psychology, philosophy, sociology, epidemiology, and neurobiology struggled for days to find common areas of agreement. In one telling exchange, neuroscientist Eric Kandel stated his conviction that addiction is a genetically transmitted brain disease characterized by progressive loss of control, and developmental psychologist Marc Lewis vehemently disagreed.

“I would not agree that addiction is a disease,” Lewis said. “There’s lots of stuff that’s genetic, like having an impulsive personality or a low frustration tolerance, that I would not call a disease.”

“It’s a disease of the brain,” Kandel repeated with some irritation.

“How can you show genetically that it’s a disease?” Lewis responded.

“If your father has it and you get it, that’s a gene,” Kandel said.

“My father has a big nose and I’ve got a big nose. That doesn’t make it a disease,” Lewis said with a chuckle.

“I think we need a course in biology before we go further, to be honest with you,” Kandel responded, clearly exasperated.

“That’s below the belt,” Lewis muttered.

“I think this is a long discussion which we’re not going to solve,” Kandel said, summarizing the proceedings. “It really requires a common culture. It was as if we came into this room a Tower of Babel. We are each speaking different languages, and we’re not quite communicating with each other because we don’t share a common culture.”

As long as the experts continue to speak different languages and find themselves incapable of discovering a “common culture,” the layperson will be confused and misinformed about alcoholism. The scope of this confusion and misunderstanding is truly astonishing, given the abundance of factual information already known about the disease. For example, alcoholism is known to be a true physiological disease that transforms its victims, leaving them in its later stages with little or no control over their behavior. Yet the majority of people in this country—professionals and nonprofessionals alike—stubbornly cling to the belief that alcoholism is an emotional “weakness” and a moral evil capable of destroying society. Note such influential views as the following:

Morris Chafetz, director of the National Institute on Alcohol Abuse and Alcoholism (NIAAA), in addressing a special prevention task force on alcoholism, December 17, 1973: “I do not happen to believe that alcoholism is a disease.” Instead, it is “a symptom of a myriad of psychological and social problems.”

Katherine Ketcham has been writing nonfiction books for forty years. Her work has been published in sixteen foreign languages and has sold nearly one million copies. She founded and serves on the board of a grassroots nonprofit organization called Trilogy Recovery Community, which helps youth and their family members dealing with alcohol and other drug problems. Ketcham lives in Walla Walla, Washington.

A Life-Saving Guide to the Myths and Realities of Alcoholism 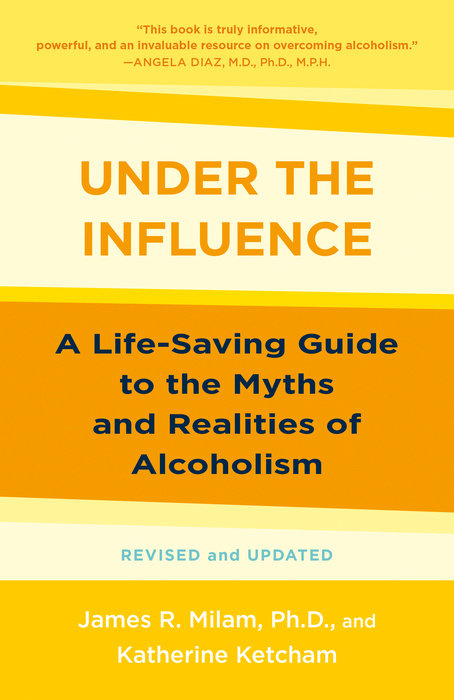