“Pulpy and hard-core, but with a heart of gold.”—io9

The otherworldly Kiriath once used their advanced technology to save the world from the dark magic of the Aldrain, only to depart as mysteriously as they arrived. Now one of the Kiriath’s uncanny machines has fallen from orbit, with a message that humanity once more faces a grave danger: the Ilwrack Changeling, a boy raised to manhood in the ghostly realm of the Gray Places. Wrapped in sorcerous slumber on an island that drifts between this world and the Gray Places, the Ilwrack Changeling is stirring. When he wakes, the Aldrain will rally to him and return in force. But with the Kiriath long gone, humankind’s fate now depends on warrior Ringil Eskiath and his few, trusted allies. Undertaking a perilous journey to strike first against the Ilwrack Changeling, each of them seeks to outrun a haunted past and find redemption in the future. But redemption won’t come cheap. Nor, for that matter, will survival.

An excerpt from The Cold Commands

hen they got down into the fringes of the forest beyond Hinerion, Gerin saw the heat shimmering off the scrublands ahead of them, and knew the crunch had come.

Live or die, this was the shape of their last chance.

“We’re going to broil out there,” he told the others that evening as they sat in their chains and waited to be fed. “You hear the march-masters talking? It’s another six weeks to Yhelteth at least, all southward, hotter every step of the way. You think these motherfuckers are going to give us any more water or food than we’re getting already?”

“Of course they will, idiot.” Tigeth, city- pallid and ponderous, and apparently too bone-fucking idle to want his freedom at any real cost, snorted, sniffed, and blew his nose on his fingers. Like half the men on the coffle, he was coming down with a cold. He wiped the snot away on the ground and glowered at Gerin. “Don’t you get it? They have to sell us when we get to Yhelteth. How they going to do that if we don’t make it, or if we’re starved to the sinew by the time we arrive? Maybe you’re too young or stupid to grasp the fact, marsh-foot, but this is commerce. We’re worth nothing to them dead.”

In some quarters of Trelayne, it was insult enough to bring down an instant formal challenge and a duel at Brillin Hill Fields with the dawn. Elsewhere, it would simply get you stabbed and dumped in the river. As with everything else in the city, assumptions were general but wealth and station defined your specifics for you. And upriver or down, the Glades or the harbor-end slums, the common truth held—no one in the city of Trelayne would easily let word stand that they might have marsh dweller blood.

Gerin had grown up in the marshes and he wouldn’t have lived in the city if you’d paid him. He let the epithet pass, the way he’d watched his kin put up with it for as long as he could remember.

Too much else at stake right now.

“You ever see the trawlers come in at harbor end, Tigeth?” he asked evenly. “You think every fish in that net makes it to market?”

“What are you talking about—fish?”

It was another city dweller, Gerin didn’t recall the name, this one more gaunt and work-worn than Tigeth. He’d barely spoken a word in the week they’d been marching; at rest stops, he spent the bulk of his time staring off into space, jaw set and working as if he had the last shreds of a tobacco twist between his teeth.

Like most of his kind, he still didn’t seem able to get his head around the enormity of what had been done to him.

“Shit is what he’s talking,” Tigeth sneered. “Doesn’t know any better. I mean, look at him; he’s a stunted little marsh brat just like any other you’d see down at Strov market, reading fortunes or twitching for the crowd. Can’t read, can’t write, chances are he can’t even count above five. He’s got no idea how commercial concerns work.”

“Well, since you and everyone else on this coffle was sold for debt, I guess that makes us about even.”

Tigeth swore and lunged at him. Brief, impotent rattle of chains and a chorus of protests as the move dragged at the other men where they sat. The gaunt man grappled Tigeth back, held the fat man’s twitching hands a few inches off Gerin’s face until Tigeth gave it up and slumped down again.

“Sit quiet, you fucking twat,” the gaunt man hissed. “You want a march-master on us? Want to end up like Barat?”

Gerin’s gaze switched involuntarily to the set of wrenched and empty manacles they still carried with them on the coffle. Big, tough Barat, a harbor-end pimp by trade, had come to the auction block the same way as Gerin—through the criminal courts. In the pimp’s case, it was some business about cutting up the wrong slumming noble when he got rough with one of the girls. Said noble turns out to have Glades connections, the Watch get off their lazy, drink-sodden arses for a change and ask some questions, break some uncooperative heads. Someone talks, Barat lands in jail long enough to spit in his accuser’s upriver face rather than cringe, ends up on the coffle as a result. Standard stuff, that same old city song.

Barat the pimp brought with him an arrogant dislike for the debt-slaves he found himself chained to, and he spent the first three days of the march taunting them to explosions of ill-judged violence, which he then slapped down with practiced thug ease and a sneer. For some reason, he’d left Gerin mostly alone, but the coffle chains were generous enough that he got to lay hands on at least four or five other men before the march-masters grew tired of the spectacle as sport, and started instead to resent the chaos it caused.

On the third day, the fifth or sixth outbreak of brawling, two or three of the caravan’s mounted overseers and owners rode back down the line to see what all the fuss was about. One of them was a woman, and when the march-masters had kicked and cursed the coffle back into order, she beckoned their chief over, leaned down in her saddle to talk to him, and sent him back to his colleagues flushed dark with chagrin. Gerin never heard what was said, but he knew what was coming the same way he’d know a change in the wind off the marsh.

He chose not to share the knowledge with Barat, and the pimp was apparently too slum-stupid or iron-headed to work it out for himself. He started another fight later that same afternoon.

The march-masters took him at midday latrine stop the following noon, just across the river from Parashal. Four of them at once, grim, leather-faced men with long wooden clubs in hand and eyes that glinted like mica. They held him down and opened the manacles with the bolt cutters they all carried at their belts like weapons. It was an act whose irrevocability turned the pimp to snorting and kicking like a terrified horse when he saw it.

But by then, of course, it was far too late.

They dragged Barat thrashing and roaring into a nearby copse, and there they took their time beating him to death. It was close enough for the sounds to carry—solid, meaty thwacks, like a butcher chopping joints apart; high, awful shrieks that very shortly broke down into pleading and gurgling moans; finally a silence that was worse than either, as the sounds of the beating went on. Gerin had seen more than his fair share of brutality, out on the marsh and in the streets of Trelayne both; but even for him, the killing seemed to take forever.

Elsewhere on the coffle, less hardened men—and these included earlier victims of Barat’s thuggish bullying—bowed their heads and stared at the ground they sat upon. One or two crammed fingers to their mouths like women, and choked back vomit. Gerin made it halfway to a sneering disdain before he realized he, too, was trembling with reaction.

Or, he told himself a little giddily, just coming down with Tigeth’s Hoiran-cursed fucking cold.

Presently, the noises stopped and the march-masters emerged from the trees, trading guffaws, grinning like well-fed wolves. They carried their clubs at rakish shoulder arms. One of them swung his manacle cutters idly to and fro in the other hand, slashing at the knee-high grass. The implement’s pincer end was dipped with blood, bright where the midday sun caught it as it swung.

And later, the unspoken knowledge settled among the silent captives, also grinning, like some new, skull-headed companion on the coffle—the understanding that it could have been any one of them in Barat’s place.

“Yeah, and speaking of that,” Gerin told them grimly, when Tigeth had quieted under the gaunt man’s admonition. “You think that’s the only empty set of cuffs you’re going to see on this chain? Every day we don’t make the market in Yhelteth is coins dripping through these fucks’ fingers. You think they’ll stop or slow down for anyone who can’t hack the heat once we start across the scrub?”

“They have to sell us,” Tigeth insisted petulantly. “It isn’t in their interests to—”

“They have to sell some of us, Mister Commerce. Enough of us to make it pay. Like I said before, you think a trawl skipper cares if he spills a few fish on the dock when he unloads?”

“How old are you, son?” someone asked curiously.

Gerin skinned an urchin grin in the gloom. “Fifteen. And contrary to what Mister Commerce there tells you, I can count above five. I count thirty-five coffles on this caravan, thirty-two head on each. That’s eleven hun dred and twenty, less Barat, and you saw what happened to him. You think any one of us is worth the extra water or the wait while they coddle us along? This is march or die, people, and Hoiran gather in the hindmost. You’re not citizens anymore, you’re slaves. You fall down out there, they’ll maybe kick you a couple of times to see if you can get up again. But if you don’t …” He spread his hands in the manacles, shrugged. “They’re going to cut you loose and leave you to die right where you fell.”

There was a murmur of agreement through the huddled figures on the chain. But as it died down, the gaunt man was gazing blankly southward, and he seemed unconvinced by his own argument.

Richard K. Morgan is the acclaimed author of The Cold Commands, The Steel Remains, Thirteen, Woken Furies, Market Forces, Broken Angels, and Altered Carbon, a New York Times Notable Book that also won the Philip K. Dick Award in 2003. The movie rights to Altered Carbon were optioned by Joel Silver and Warner Bros on publication, and a film version is currently in development with Mythology Entertainment. Market Forces was also optioned to Warner Bros, before it was even published, and it won the John W. Campbell Award in 2005. Thirteen won the Arthur C. Clarke Award in 2007 and is currently under movie option to Straight Up films. The Steel Remains won the Gaylactic Spectrum Award in 2010, and its sequel, The Cold Commands, appeared in both Kirkus Reviews’ and NPR’s Best Science Fiction/Fantasy Books of the Year lists. Morgan is a fluent Spanish speaker and has lived and worked in Madrid, Istanbul, Ankara, and London, as well as having traveled extensively in the Americas, Africa, and Australia. He now lives in Scotland with his wife, Virginia, and son, Daniel. 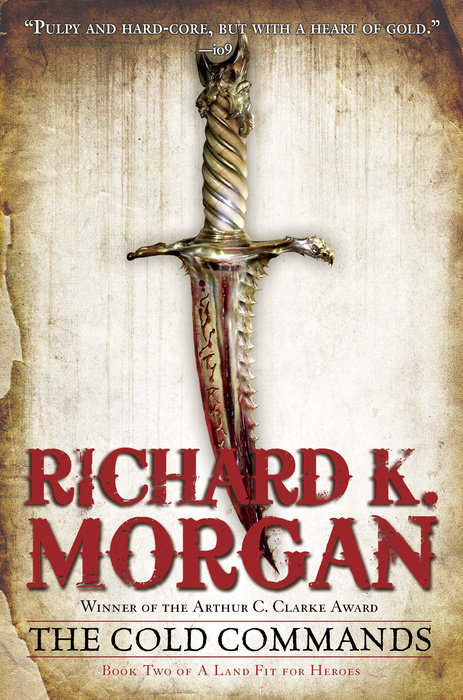