This classic biography is the story of seven men—a naturalist, a writer, a lover, a hunter, a ranchman, a soldier, and a politician—who merged at age forty-two to become the youngest President in history.

The Rise of Theodore Roosevelt begins at the apex of his international prestige. That was on New Year’s Day, 1907, when TR, who had just won the Nobel Peace Prize, threw open the doors of the White House to the American people and shook 8,150 hands. One visitor remarked afterward, “You go to the White House, you shake hands with Roosevelt and hear him talk—and then you go home to wring the personality out of your clothes.”

The rest of this book tells the story of TR’s irresistible rise to power. During the years 1858–1901, Theodore Roosevelt transformed himself from a frail, asthmatic boy into a full-blooded man. Fresh out of Harvard, he simultaneously published a distinguished work of naval history and became the fist-swinging leader of a Republican insurgency in the New York State Assembly. He chased thieves across the Badlands of North Dakota with a copy of Anna Karenina in one hand and a Winchester rifle in the other. Married to his childhood sweetheart in 1886, he became the country squire of Sagamore Hill on Long Island, a flamboyant civil service reformer in Washington, D.C., and a night-stalking police commissioner in New York City. As assistant secretary of the navy, he almost single-handedly brought about the Spanish-American War. After leading “Roosevelt’s Rough Riders” in the famous charge up San Juan Hill, Cuba, he returned home a military hero, and was rewarded with the governorship of New York. In what he called his “spare hours” he fathered six children and wrote fourteen books. By 1901, the man Senator Mark Hanna called “that damned cowboy” was vice president. Seven months later, an assassin’s bullet gave TR the national leadership he had always craved.

His is a story so prodigal in its variety, so surprising in its turns of fate, that previous biographers have treated it as a series of haphazard episodes. This book, the only full study of TR’s pre-presidential years, shows that he was an inevitable chief executive. “It was as if he were subconsciously aware that he was a man of many selves,” the author writes, “and set about developing each one in turn, knowing that one day he would be President of all the people.”

An excerpt from The Rise of Theodore Roosevelt

Then King Olaf entered,
Beautiful as morning,
Like the sun at Easter
Shone his happy face.

On the late afternoon of 27 October 1858, a flurry of activity disturbed the genteel quietness of East Twentieth Street, New York City. Liveried servants flew out of the basement of No. 28, the Roosevelt brownstone, and hurried off in search of doctors, midwives, and stray members of the family-a difficult task, for it was now the fashionable visiting hour. Meanwhile Mrs. Theodore Roosevelt lay tossing in her satinwood bed, awaiting the arrival of her second child and first son.

Gaslight was flaring on the cobbles by the time a doctor arrived. The child was born at a quarter to eight, emerging so easily that neither chloroform nor instruments were needed. “Consequently,” reported his grandmother, “the dear little thing has no cuts nor bruises about it.” Theodore Roosevelt, Junior, was “as sweet and pretty a young baby as I have ever seen.”

Mittie Roosevelt, inspecting her son the following morning, disagreed. She said, with Southern frankness, that he looked like a terrapin.

Apart from these two contradictory images, there are no further visual descriptions of the newborn baby. He weighed eight and a half pounds, and was more than usually noisy. When he reappears in the family chronicles ten months later, he has acquired a milk-crust and a nickname, “Teedie.” At eighteen months the milk-crust has gone, but the nickname has not. He is now “almost a little beauty.”

Scattered references in other letters indicate a bright, hyperactive infant. Yet already the first of a succession of congenital ailments was beginning to weaken him. Asthma crowded his lungs, depriving him of sleep. “One of my memories,” the ex-President wrote in his Autobiography, “is of my father walking up and down the room with me in his arms at night when I was a very small person, and of sitting up in bed gasping, with my father and mother trying to help me.” Even more nightmarish was the recollection of those same strong arms holding him, as the Roosevelt rig sped through darkened city streets, forcing a rush of air into the tiny lungs.

Theodore Roosevelt, Senior, was no stranger to childhood suffering. Gifted himself with magnificent health and strength-“I never seem to get tired”-he overflowed with sympathy for the small, the weak, the lame, and the poor. Even in that age when a certain amount of charitable work was expected of well-born citizens, he was remarkable for his passionate efforts on behalf of the waifs of New York. He had what he called “a troublesome conscience.”

Every seventh day of his life was dedicated to teaching in mission schools, distributing tracts, and interviewing wayward children. Long after dark he would come home after dinner at some such institution as the Newsboys’ Lodging-House, or Mrs. Sattery’s Night School for Little Italians. One of his prime concerns, as a founder of the Children’s Aid Society, was to send street urchins to work on farms in the West. His charity extended as far as sick kittens, which could be seen peeking from his pockets as he drove down Broadway.

At the time of Teedie’s birth, Theodore Senior was twenty-seven years old, a partner in the old importing firm of Roosevelt and Son, and already one of the most influential men in New York. Handsome, wealthy, and gregarious, he was at ease with millionaires and paupers, never showing a trace of snobbery, real or inverse, in his relations with either class. “I can see him now,” remembered a society matron years later, “in full evening dress, serving a most generous supper to his newsboys in the Lodging-House, and later dashing off to an evening party on Fifth Avenue.”

A photograph taken in 1862 shows deep eyes, leonine features, a glossy beard, and big, sloping shoulders. “He was a large, broad, bright, cheerful man,” said his nephew Emlen Roosevelt, “. . . deep through, with a sense of abundant strength and power.” The word “power” runs like a leitmotif through other descriptions of Theodore Senior: he was a person of inexorable drive. “A certain expression” on his face, as he strode breezily into the offices of business acquaintances, was enough to flip pocketbooks open. “How much this time, Theodore?”

For all his compulsive philanthropy, he was neither sanctimonious nor ascetic. He took an exuberant, masculine joy in life, riding his horse through Central Park “as though born in the saddle,” exercising with the energy of a teenager, waltzing all night long at society balls. Driving his four-in-hand back home in the small hours of the morning, he rattled through the streets at such a rate that his grooms allegedly “fell out at the corners.”

Such a combination of physical vitality and genuine love of humanity was rare indeed. His son called Theodore Senior “the best man I ever knew,” adding, “. . . but he was the only man of whom I was ever really afraid.”

In all respects except their intense love for each other, Theodore and Martha Roosevelt were striking opposites. Where he was big and disciplined and manly, “Mittie” was small, vague, and feminine to the point of caricature. He was the archetypal Northern burgher, she the Southern belle eternal, a lady about whom there always clung a hint of white columns and wisteria bowers. Born and raised in the luxury of a Georgia plantation, she remained, according to her son, “entirely unreconstructed until the day of her death.”

Of her beauty, especially in her youth (she was twenty-three when Teedie was born), contemporary accounts are unanimous in their praise. Her hair was fine and silky black, with a luster her French hairdresser called noir doré. Her skin was “more moonlight-white than cream-white,” and in her cheeks there glowed a suggestion of coral.14 Every day she took two successive baths, “one for cleaning, one for rinsing,” and she dressed habitually in white muslin, summer and winter. “No dirt,” an admirer marveled, “ever stopped near her.”

On Mittie’s afternoons “at home” she would sit in her pale blue parlor, surrounded always by bunches of violets, while “neat little maids in lilac print gowns” escorted guests into her presence. Invariably they were enchanted. “Such loveliness of line and tinting . . . such sweet courtesy of manner!” gushed Mrs. Burton Harrison, a memoirist of the period. Of five or six gentlewomen whose “birth, breeding, and tact” established them as the flowers of New York society, “Mrs. Theodore Roosevelt seemed to me easily the most beautiful.”

Edmund Morris was born and educated in Kenya and attended college in South Africa. He worked as an advertising copywriter in London before immigrating to the United States in 1968. His first book, The Rise of Theodore Roosevelt, won the Pulitzer Prize and the National Book Award in 1980. Its sequel, Theodore Rex, won the Los Angeles Times Book Prize for Biography in 2001. In between these two books, Morris became President Reagan’s authorized biographer and wrote the national bestseller Dutch: A Memoir of Ronald Reagan. He then completed his trilogy on the life of the twenty-sixth president with Colonel Roosevelt, also a bestseller, and has published Beethoven: The Universal Composer and This Living Hand and Other Essays. Edison is his final work of biography. He was married to fellow biographer Sylvia Jukes Morris for fifty-two years. Edmund Morris died in 2019. 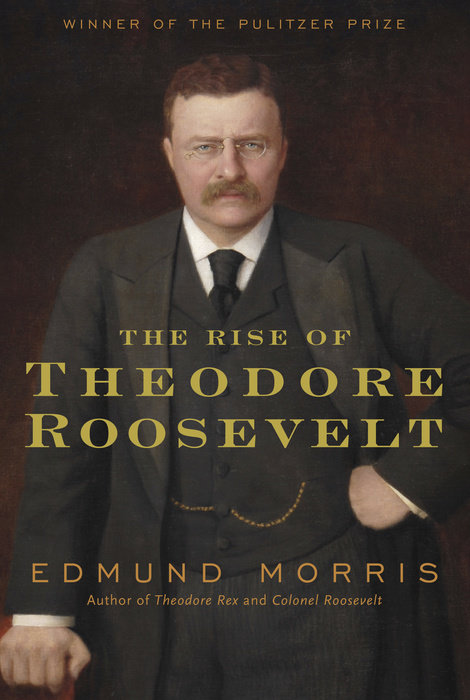