The fifth edition of the beloved classic--completely revised and updated

The miracle of life—for a new generation. The completely revised fifth edition of the beloved classic offers an astonishing glimpse of the world within the womb alongside authoritative advice for expectant parents.

Deep inside a woman’s body, a miracle occurs. An egg and sperm meet and a new human being is created. Through the unique photographs of Lennart Nilsson, we see the fascinating process of fertilization unfold and watch as an embryo develops from a tiny cluster of cells into a fetus, growing and maturing day by day until the time comes to meet the world outside the womb. The book also describes pregnancy from a parent's perspective, diving into maternity care, health during pregnancy, prenatal testing, and labor and delivery.

First published nearly fifty years ago, A Child Is Born broke astonishing new ground, bringing the magic of pregnancy and birth to life. This is the fifth edition of the beloved international classic, which teams Nilsson’s classic medical photographs with new documentary photographs by Linda Forsell and a revised text by professor Lars Hamberger and midwife Gudrun Abascal.

An excerpt from A Child Is Born

Love—desire—longing. Sexual desire at its simplest is a biological drive, designed to ensure reproduction and the survival of our species, ideally with the best possible gene pool. Desire can be primitive, but also complex—as when two people fall in love. Love and sex bring us closer together, in body as well as spirit, instilling a feeling of deep connection.

The chemistry of love

It all begins in the brain, with that tiny, magical spark of first attraction. Something about another person tugs at us: their looks, their charisma, the sound of their voice, the way they carry themselves, or the way they smell. It could be a glint in the eye, a lingering glance, or an infectious laugh. Or maybe it is just that the time is right, for us or for our biological clock. What­ever the cause, our attraction has real physical effects. We blush and stammer. Our palms sweat. We feel a tingling in our veins, butterflies in our stomach.

When it comes to attraction and our choice of partner, our biology and chemistry probably affect us more than we know. The chemistry of love involves a host of substances: dopamine, noradrenaline, serotonin, oxytocin, vasopressin, cortisol, pheromones, and especially the sex hormones estrogen and testosterone. Testosterone in men and estrogen in women transmit complicated chemical messages. These hormones affect our appearance and feelings and are essential to the reproduction process.

Like sexual desire, the longing for a child is a powerful, primal drive in women and men alike. In nature, almost all reproductive processes rely on one male and one female parent. This is true in both the plant and the animal kingdoms, which means it is true for humans as well. Conceiving a human baby requires a mature and viable egg from a woman and a mature and viable sperm from a man, although this may or may not be reflected in the actual partner relationship or the makeup of the family-to-be. For many couples, a child is the natural consequence of what began with attraction, then be­came passion, and finally grew into love.

All human beings belong to the biological species homo sapiens, with a shar­ed genetic code that distinguishes us, for example, from apes, from pigs, and from birds. The great apes, chimpanzees, gorillas, and orangutans are our closest relations; our genetic codes differ only marginally from theirs. We are also genetically very similar to swine, or the porcine family. The differences from one human being to the next are even smaller, measurable in tenths of a percent, but they are still big enough to make each individual unique. We now know that even identical twins carry tiny genetic differences. Human beings of the same descent are genetically very similar; the closest likeness is among members of the same nuclear or extended family, who can share the same hair and eye color, height and weight, and even health status and life expectancy.

In recent years genetics has become a central focus in biology. Much can be explained by genetics, but it is important to realize that genetics and the environment are in constant interaction. We know that our environment affects us in many ways, and that the environment we experienced at the embryonic and fetal stages of our development influences our later lives. We are now very much aware of how important it is for pregnant women to think about what they eat and drink and the environments to which they are exposed.

Today we know much more than ever before about the significance of genetics, both for mankind as a unique species and for each individual. Our complete genetic code, consisting of some 20,000 different genes, has now been mapped. But we still know relatively little about what these genes do, what they imply for each of us, and how they either cooperate with or op­pose one another in our bodies. And much remains to be learned about how the environment affects the ability of each individual gene to express itself.

A copy of our genetic code is stored in the nucleus of every cell in our bodies. Within the nucleus, forty-six chromosomes carry the genetic material itself: our genes. This structure is common to all human beings. But there are small variations within the structure that determine the characteristics of each human being, and these little differences are what make every individual just slightly different from every other, in terms of appearance, talents, behavior, and so on.

Since the genetic material in every cell of each human being is identical, the details of that individual’s genetic composition may be determined by exa­mining any single cell. These techniques are used today to trace hereditary disposition for certain diseases.

Genetic material consists of DNA (deoxyribonucleic acid) molecules in the shape of a long double helix. These intertwined spirals of chemical building blocks are often designated by the letters A, C, G, and T. Combinations of these letters can spell out a very large number of different messages.

Our cells multiply by division, and each time a cell divides, two new ones, with exactly the same genetic material, are created. In every second in time, in every part of our bodies, throughout our entire lives, thousands of new cells, identical to the old ones, are being created. Once the cells of a bodily organ age, they expire, in accordance with a special pattern (known as programmed cell death, or apoptosis), and are replaced by new ones, keeping our bodies young and strong for many years.

Sex cells differ from the other cells in the human body in that at the moment of fertilization they contain only twenty-three chromosomes each. When egg and sperm fuse, the same number of chromosomes come from the man and the woman, bringing the total back up to forty-six chromosomes, in twenty-three pairs. The first twenty-two pairs of chromosomes are the same in both sexes and they are numbered by size: chromosome 1 is the largest and chromosome 22 is the smallest. But the twenty-third pair is unique, because it can consist either of two X chromosomes in women, or one X and one Y chromosome in men.

Immature eggs, like all cells in the body, contain forty-six chromosomes, and the twenty-third pair is always two X chromosomes. But a few hours before ovulation, when the egg is almost ready to be fertilized, the number of chromosomes is reduced by half. Immature sperm also contain forty-six chromosomes, and this number is also halved when the sperm matures. But here something unique occurs, because the twenty-third chromosome pair in a man consists of one X and one Y chromosome. When the immature sperm splits into two parts, one contains an X chromosome and the other a Y. Thus half the mature sperm contain the genetic traits for girls and the other half for boys. The trait of the sperm that fertilizes the egg determines the sex of the new human being.

After both the man and the woman have passed their own genetic material on to the new individual, the woman plays the main part until birth. In her body the first cell divisions take place, and a new little being is formed. Her reproductive system, which prepares for fertilization and pregnancy every month for about thirty-five years, is optimally adapted to nurturing an embryo and carrying it to term.

In contrast to a man, who produces sex cells throughout his life, a woman’s stock of eggs develops before she is born, then decreases gradually. In the fourth month of embryonic development the ovaries of the female fetus have already produced the six to seven million eggs that comprise her lifetime production of eggs. Even before she is born, millions of the eggs expire; this programmed cell death in the ovaries continues steadily after birth. By puberty, when the young woman ovulates for the first time, only about 400,000 immature eggs remain, and by the time she reaches menopause, in her fifties, virtually her entire stock has been depleted.

During the entire period in which a woman is fertile and ovulating, her ovaries use up no more than four hundred eggs; this figure is often lower since pregnancies, nursing, and hormonal methods of birth control all prevent a woman from ovulating for certain periods. Only a few of these eggs at most will ever be fertilized and become a child. So a woman actually has an enormous reserve capacity.

Before puberty a girl’s hormones undergo a change that makes her ovaries begin to produce more estrogen, and the eggs begin to mature. The shape of her girlish body also begins to change, and her entrance into adulthood is confirmed when she begins to menstruate. The most important female hormone is estrogen. It contributes not only to the development of a woman’s figure but also the size of her breasts, the softness of her skin, and the thickness of her pubic hair; it also affects some regions of her brain. Estrogen reaches all these parts of her body via the circulatory system.

A century ago young women usually had their first period around the age of fifteen, but today in well-to-do countries such as Sweden and the United States and Britain menarche is much earlier (the average age is 12.5). One explanation is that the timing is governed more by weight than by age. We eat differently today, and girls tend to achieve the critical weight for menstruation (46–47 kilograms/101–103 pounds) far earlier than in the past. Of course, there are wide individual and ethnic variations.

LENNART NILSSON was born in 1922 near Stockholm. He embarked on his career in the mid-1940s, when modern photojournalism was beginning to expand in Sweden. His breakthrough photo-essays were published both in Sweden and abroad, for magazines such as Life, Picture Post and Illustrated. In the mid-1950s Nilsson started experimenting with new photographic techniques, using microscopes to 'get closer'. His revealing macro studies of the human body's inner mysteries were a big sensation and were published in magazines and books worldwide. In 1965 his groundbreaking images illustrating the beginning of life, from conception to birth, were published in the book, A Child is Born, which has since been translated into twenty languages. He has also made several award-winning films. Lennart Nilsson was designated an Honorary Doctor of Medicine by the Karolinska Institute in 1976 and he is Honorary Doctor of Philosophy of the Technische Unversitat Braunschweig in Germany (2002) as well as of Linkoping University in Sweden (2003).

The fifth edition of the beloved classic--completely revised and updated 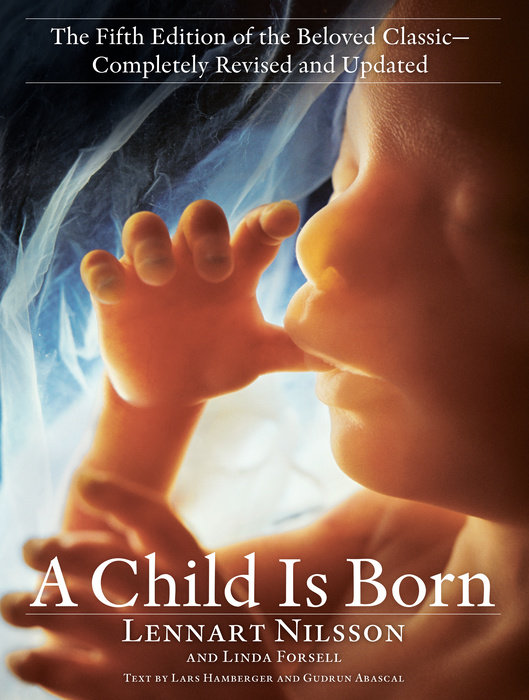