The New York Times compared Sheldon M. Novick’s Henry James: The Young Master to “a movie of James’s life, as it unfolds, moment to moment, lending the book a powerful immediacy.” Now, in Henry James: The Mature Master, Novick completes his super, revelatory two-volume account of one of the world’s most gifted and least understood authors, and of a vanished world of aristocrats and commoners.

Using hundreds of letters only recently made available and taking a fresh look at primary materials, Novick reveals a man utterly unlike the passive, repressed, and privileged observer painted by other biographers. Henry James is seen anew, as a passionate and engaged man of his times, driven to achieve greatness and fame, drawn to the company of other men, able to write with sensitivity about women as he shared their experiences of love and family responsibility.

James, age thirty-eight as the volume begins, basking in the success of his first major novel, The Portrait of a Lady, is a literary lion in danger of being submerged by celebrity. As his finances ebb and flow he turns to the more lucrative world of the stage–with far more success than he has generally been credited with. Ironically, while struggling to excel in the theatre, James writes such prose masterpieces as The Wings of the Dove and The Golden Bowl.

Through an astonishingly prolific life, James still finds time for profound friendships and intense rivalries. Henry James: The Mature Master features vivid new portraits of James’s famous peers, including Edith Wharton, Oscar Wilde, and Robert Louis Stevenson; his close and loving siblings Alice and William; and the many compelling young men, among them Hugh Walpole and Howard Sturgis, with whom James exchanges professions of love and among whom he thrives. We see a master converting the materials of an active life into great art.

Here, too, as one century ends and another begins, is James’s participation in the public events of his native America and adopted England. As the still-feudal European world is shaken by democracy and as America sees itself endangered by a wave of Jewish and Italian immigrants, a troubled James wrestles with his own racial prejudices and his desire for justice. With the coming of world war all other considerations are set aside, and James enlists in the cause of civilization, leaving his greatest final works unwritten.

Hailed as a genius and a warm and charitable man–and derided by enemies as false, effeminate, and self-infatuated–Henry James emerges here as a major and complex figure, a determined and ambitious artist who was planning a new novel even on his deathbed. In Henry James: The Mature Master, he is at last seen in full; along with its predecessor volume, this book is bound to become the definitive biography.

NOTE: This edition does not include a photo insert.

An excerpt from Henry James: The Mature Master

Henry James’s first major novel, The Portrait of a Lady, was published in the fall of 1881 and was an immediate success. He was at the time a middle-aged bachelor living in furnished lodgings at 3 Bolton Street, in the heart of London, two doors in from Piccadilly. Bolton Street was an enclave of transients, of furnished lodgings in what had once been modest town houses between shops and galleries to the east and the great houses and gentlemen’s clubs to the west. The broad, mile-long neighboring avenue of Piccadilly was noisy with carriages, cabs, vans; there was a cab rank at his corner, and in the evenings prostitutes were numerous as one walked up toward the crowded hub of Piccadilly Circus.

His rooms were on the “parlor floor” of the house, up a set of stairs from the street, and comprised a dim, high-ceilinged front sitting room, whose tall corniced windows looked out upon the blank side wall of the great house opposite, and a dark back bedroom: a place to work and a place to sleep.His landlady was on the ground floor; her daughter opened the outside door to visitors. A kitchen maid brought tea and toast in the mornings, a chop and a boiled potato for his lunch, from the subterranean kitchen. For a small fee, a stout red-faced woman carried off his dirty linen once each week and returned it heavily starched and pressed. In the evenings he dined out, walking the winter streets for exercise and to save cab fare.

The city’s essential characteristic was its immensity: on such a scale, violence became grandeur. James’s image for London was masculine, the city was a giant, or an ogre that fed on human flesh. On winter afternoons, a filthy yellowish brown fog hung over the city; gas lamps were lighted, but their weak gleam barely penetrated the fog. A dim red glow on the horizon might have been the light of the setting sun or the flames of gasworks, it was impossible to tell. Indoors in the warmly lit Reform Club fog lay on the lower steps of the broad marble staircase, and only in the library upstairs did firelight and lamplight fully dispel the gloom. As he wrote to his brother Robertson in America:

You know that I am very much settled in London & have pretty well adopted the place as my permanent residence. It agrees with me in every particular & I feel thoroughly at home here. It is a wonderful, brutal great Babylon of a place, & if one doesn’t like it very much, one must hate it: but fortunately I like it. I have every reason to do so, having had a good deal of success here, & put my fame & fortune on a sufficiently promising footing.

His father, the elder Henry James, had restlessly uprooted his family, had fled the confining village atmosphere of pre–Civil War Manhattan, with wife, five children, nursemaid, and tutors trailing after him. The family had lived for a time in Paris, until their funds ran out, and then in a succession of seaside resorts, and finally landed in what had seemed to Henry the desert of Cambridge, Massachusetts. He had fled, in his turn, to Paris and now at last to London, the world city.

In London every race and nation, every form of worship, were represented. As Baedeker famously said, there were more Scots in London than in Aberdeen, more Jews than in Palestine, more Catholics than in Rome. Cosmopolitan to the last degree, London was the capital of the world and the present home of its ruling class, who over centuries had created a highly distinct and elaborated civilization, a cosmopolitan community that for James approached the “ideal of a convenient society,” one in which he had a place:

a society in which intimacy is possible, in which the associated meet often and sound and select and measure and inspire each other, and relations and combinations have time to form themselves.

The most important part of London life, the center to which he was drawn, was James’s circle of men active in the arts, whose position or means allowed them to serve as mentors and patrons to younger men. He had found his way into it slowly. His principal guides were Lord Houghton, Lord Rosebery, and Charles Hamilton Aïdé, the last a man who still kept his youthful appearance although he was at this time about fifty years old. Aïdé would come to typify the bachelors of this world. He was slender and below average height: “A dapper little gentleman with dark hyacinthine locks . . . most exquisite of exquisites,” as a mutual friend knowingly said. Aïdé was French as well as English and had the graceful manner and conscious carriage of a Parisian. “An aesthetic bachelor of a certain age,” James called him, expecting to be understood, “excellent and amiable.”

In later years, when Aïdé visited America and presumed on their long friendship to call on James’s family and friends, James awkwardly distanced himself and disavowed their intimacy; but in his early years in London, Aïdé was a valued and close friend. Like Houghton and Rosebery, Aïdé entertained regularly, and his musical evenings were well attended by actors and patrons of the theater; at his little dinners James also met the most promising of painters and poets. Aïdé introduced James to overlapping, vaguely defined circles that a later generation—not entirely accurately or fairly—would call aristocratic and homosexual and that the middle-class press satirized as “aesthetic”: the sculptor and patron Lord Ronald Gower and his protégé Morton Fullerton, the painter Sir Frederick Leighton and his pupil the sculptor Hamo Thornycroft; the poet and critic J. A. Symonds, who would publish a celebrated defense of homosexuality; Thornycroft’s intimate friend Edmund Gosse; and a shifting circle of other young painters, actors, and writers. These men, many of whom had shared public school and university experiences, would be among James’s closest friends. His beloved Hendrik Andersen would later join the circle, first as Gower’s protégé and then as James’s.

Aïdé wrote light verse and had made an early success with a novel, Rita, the fictional autobiography of a young woman. His sentimental love songs, sonnets, and ballads, sometimes set to his own music, were addressed to a genderless “you” and were popular in Great Britain and America. He was, like James, a habitué of the theater, and for his friend the actor George Alexander, for whom James too would eventually write a play, he would adapt a French farce. Again like James, he was always carefully dressed; perhaps too carefully. A friend said of James, “He was always well dressed,” not meaning precisely a compliment:

he gave the impression—with his rather conspicuous spats and extra shiny boots—of having just come from an ultra-smart wedding.

At Aïdé’s frequent small dinners for artists and writers, in his flat in Hanover Square, or at weekends at his house in Lyndhurst (and later in Ascot), James met many of the leading painters and illustrators of the day, especially George du Maurier, Alfred Parsons, and his young protégé the American Edwin Abbey, who would be among his most intimate friends. James would draw Aïdé’s portrait, dressed in rags, as “Hyacinth Robinson,” the hero of The Princess Casamassima, James’s novel of the dark side of London.

In many ways, Aïdé embodied the distinctive attractions of London. Elizabeth Robins had called him “hyacinthine,” and James would call his fictional avatar “Hyacinth,” after the beautiful youth loved and slain by Apollo, using a name that was a slang reference to a man attractive to other men. Aïdé was charming but by no means effeminate; he was aristocratic in a particular sense, he was cosmopolitan—which was to say not precisely English, as James was not precisely or only American. There were as yet no salons like Aïdé’s in New York or Boston; in Paris, salons were conducted by women, and their dynamics were driven by heterosexual attractions. In Rome and in London, however, James found gatherings of men like himself, cultivated and intelligent, artists and their mentors who were attracted to other men as well as to women, some who were absolute bachelors and some who were married and fathers: cosmopolitan men who were at home in the languages and capitals of Europe. They and the women of their class and generation were the keepers of transmitted culture. When James returned to the United States later in life, he would record his dismay that American men had abandoned their obligations to civilized life and left art and religion solely in the keeping of women.

Sheldon M. Novick is the author of Henry James: The Young Master and Honorable Justice: The Life of Oliver Wendell Holmes, and is the editor of The Collected Works of Justice Holmes. He is Adjunct Professor of Law and History at Vermont Law School, and lives in Norwich, Vermont. 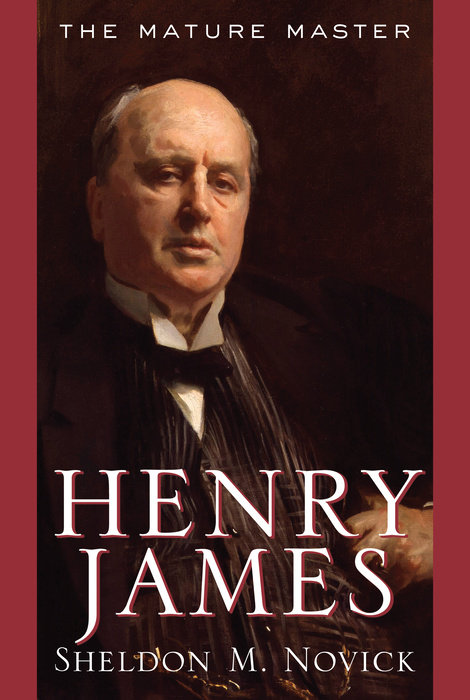