Book Three of the Temeraire

In the third novel of the New York Times bestselling Temeraire series, Captain Will Laurence and his dragon transport precious cargo while fending off enemies on all sides.

After their fateful adventure in China, Captain Will Laurence of His Majesty’ s Aerial Corps and his extraordinary dragon, Temeraire, are waylaid by a mysterious envoy bearing urgent new orders from Britain. Three valuable dragon eggs have been purchased from the Ottoman Empire, and Laurence and Temeraire must detour to Istanbul to escort the precious cargo back to England. Time is of the essence if the eggs are to be borne home before hatching.

Yet disaster threatens the mission at every turn—thanks to the diabolical machinations of the Chinese dragon Lien, who blames Temeraire for her master’s death and vows to ally herself with Napoleon and take vengeance. Then, faced with shattering betrayal in an unexpected place, Laurence, Temeraire, and their squad must launch a daring offensive. But what chance do they have against the massed forces of Bonaparte’s implacable army?

An excerpt from Black Powder War

The hot wind blowing into Macao was sluggish and unrefreshing, only stirring up the rotting salt smell of the harbor, the fish-corpses and great knots of black-red seaweed, the effluvia of human and dragon wastes. Even so the sailors were sitting crowded along the rails of the Allegiance for a breath of the moving air, leaning against one another to get a little room. A little scuffling broke out amongst them from time to time, a dull exchange of shoving back and forth, but these quarrels died almost at once in the punishing heat.

Temeraire lay disconsolately upon the dragondeck, gazing towards the white haze of the open ocean, the aviators on duty lying half-asleep in his great shadow. Laurence himself had sacrificed dignity so far as to take off his coat, as he was sitting in the crook of Temeraire’s foreleg and so concealed from view.

“I am sure I could pull the ship out of the harbor,” Temeraire said, not for the first time in the past week; and sighed when this amiable plan was again refused: in a calm he might indeed have been able to tow even the enormous dragon transport, but against a direct headwind he could only exhaust himself to no purpose.

“Even in a calm you could scarcely pull her any great distance,” Laurence added consolingly. “A few miles may be of some use out in the open ocean, but at present we may as well stay in harbor, and be a little more comfortable; we would make very little speed even if we could get her out.”

“It seems a great pity to me that we must always be waiting on the wind, when everything else is ready and we are also,” Temeraire said. “I would so like to be home soon: there is so very much to be done.” His tail thumped hollowly upon the boards, for emphasis.

“I beg you will not raise your hopes too high,” Laurence said, himself a little hopelessly: urging Temeraire to restraint had so far not produced any effect, and he did not expect a different event now. “You must be prepared to endure some delays; at home as much as here.”

“Oh! I promise I will be patient,” Temeraire said, and immediately dispelled any small notion Laurence might have had of relying upon this promise by adding, unconscious of any contradiction, “but I am quite sure the Admiralty will see the justice of our case very quickly. Certainly it is only fair that dragons should be paid, if our crews are.”

Having been at sea from the age of twelve onwards, before the accident of chance which had made him the captain of a dragon rather than a ship, Laurence enjoyed an extensive familiarity with the gentlemen of the Admiralty Board who oversaw the Navy and the Aerial Corps both, and a keen sense of justice was hardly their salient feature. The offices seemed rather to strip their occupants of all ordinary human decency and real qualities: creeping, nip-farthing political creatures, very nearly to a man. The vastly superior conditions for dragons here in China had forced open Laurence’s unwilling eyes to the evils of their treatment in the West, but as for the Admiralty’s sharing that view, at least so far as it would cost the country tuppence, he was not sanguine.

In any case, he could not help privately entertaining the hope that once at home, back at their post on the Channel and engaged in the honest business of defending their country, Temeraire might, if not give over his goals, then at least moderate them. Laurence could make no real quarrel with the aims, which were natural and just; but England was at war, after all, and he was conscious, as Temeraire was not, of the impudence in demanding concessions from their own Government under such circumstances: very like mutiny. Yet he had promised his support and would not withdraw it. Temeraire might have stayed here in China, enjoying all the luxuries and freedoms which were his birthright, as a Celestial. He was coming back to England largely for Laurence’s sake, and in hopes of improving the lot of his comrades-in-arms; despite all Laurence’s misgivings, he could hardly raise a direct objection, though it at times felt almost dishonest not to speak.

“It is very clever of you to suggest we should begin with pay,” Temeraire continued, heaping more coals of fire onto Laurence’s conscience; he had proposed it mainly for its being less radical a suggestion than many of the others which Temeraire had advanced, such as the wholesale demolition of quarters of London to make room for thoroughfares wide enough to accommodate dragons, and the sending of draconic representatives to address Parliament, which aside from the difficulty of their getting into the building would certainly have resulted in the immediate flight of all the human members. “Once we have pay, I am sure everything else will be easier. Then we can always offer people money, which they like so much, for all the rest; like those cooks which you have hired for me. That is a very pleasant smell,” he added, not a non sequitur: the rich smoky smell of well-charred meat was growing so strong as to rise over the stench of the harbor.

Laurence frowned and looked down: the galley was situated directly below the dragondeck, and wispy ribbons of smoke, flat and wide, were seeping up from between the boards of the deck. “Dyer,” he said, beckoning to one of his runners, “go and see what they are about, down there.”

Temeraire had acquired a taste for the Chinese style of dragon cookery which the British quartermaster, expected only to provide freshly butchered cattle, was quite unable to satisfy, so Laurence had found two Chinese cooks willing to leave their country for the promise of substantial wages. The new cooks spoke no English, but they lacked nothing in self-assertion; already professional jealousy had nearly brought the ship’s cook and his assistants to pitched battle with them over the galley stoves, and produced a certain atmosphere of competition.

Dyer trotted down the stairs to the quarterdeck and opened the door to the galley: a great rolling cloud of smoke came billowing out, and at once there was a shout and halloa of “Fire!” from the look-outs up in the rigging. The watch-officer rang the bell frantically, the clapper scraping and clanging; Laurence was already shouting, “To stations!” and sending his men to their fire crews.

All lethargy vanished at once, the sailors running for buckets, pails; a couple of daring fellows darted into the galley and came out dragging limp bodies: the cook’s mates, the two Chinese, and one of the ship’s boys, but no sign of the ship’ s cook himself. Already the dripping buckets were coming in a steady flow, the bosun roaring and thumping his stick against the foremast to give the men the rhythm, and one after another the buckets were emptied through the galley doors. But still the smoke came billowing out, thicker now, through every crack and seam of the deck, and the bitts of the dragondeck were scorching hot to the touch: the rope coiled over two of the iron posts was beginning to smoke.

Young Digby, quick-thinking, had organized the other ensigns: the boys were hurrying together to unwind the cable, swallowing hisses of pain when their fingers brushed against the hot iron. The rest of the aviators were ranged along the rail, hauling up water in buckets flung over the side and dousing the dragondeck: steam rose in white clouds and left a grey crust of salt upon the already warping planks, the deck creaking and moaning like a crowd of old men. The tar between the seams was liquefying, running in long black streaks along the deck with a sweet, acrid smell as it scorched and smoked. Temeraire was standing on all four legs now, mincing from one place to another for relief from the heat, though Laurence had seen him lie with pleasure on stones baked by the full strength of the midday sun.

Captain Riley was in and among the sweating, laboring men, shouting encouragement as the buckets swung back and forth, but there was an edge of despair in his voice. The fire was too hot, the wood seasoned by the long stay in harbor under the baking heat; and the vast holds were filled with goods for the journey home: delicate china wrapped in dry straw and packed in wooden crates, bales of silks, new-laid sailcloth for repairs. The fire had only to make its way four decks down, and the stores would go up in quick hot flames running all the way back to the powder magazine, and carry her all away.

Naomi Novik is the acclaimed author of A Deadly Education, the Temeraire series, and the award-winning novels Uprooted and Spinning Silver. She is a founder of the Organization for Transformative Works and the Archive of Our Own. She lives in New York City with her family and six computers.

Book Three of the Temeraire 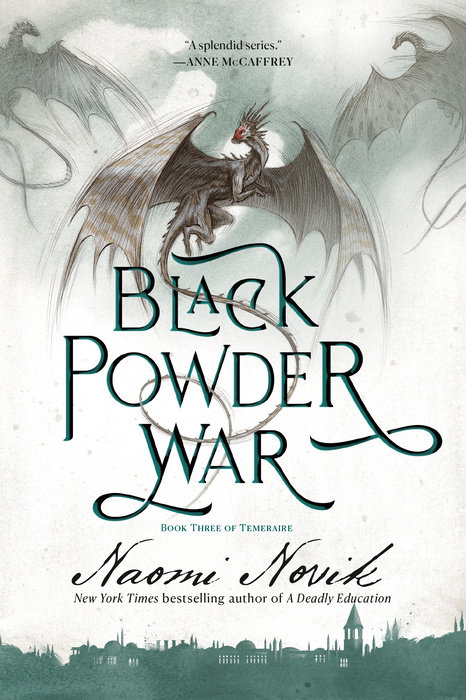