From the New York Times bestselling author of A Deadly Education comes the fourth volume of the Temeraire series, as the Napoleonic Wars bring Will Laurence and Temeraire to Africa in search of aid.

“Temeraire is a dragon for the ages.”—Terry Brooks

Tragedy has struck His Majesty's Aerial Corps, whose magnificent fleet of fighting dragons and their human captains valiantly defends England’s shores against the encroaching armies of Napoleon Bonaparte. An epidemic of unknown origin and no known cure is decimating the noble dragons’ ranks—forcing the hopelessly stricken into quarantine. Now only Temeraire and a pack of newly recruited dragons remain uninfected—and stand as the only means of an airborne defense against France's ever bolder sorties.

Bonaparte’s dragons are already harrowing Britain’s ships at sea. Only one recourse remains: Temeraire and his captain, Will Laurence, must take wing to Africa, whose shores may hold the cure for the mysterious and deadly contagion. On this mission there is no time to waste, and no telling what

An excerpt from Empire of Ivory

Send up another, damn you, send them all up, at once if you have to,” Laurence said savagely to poor Calloway, who did not deserve to be sworn at: the gunner was firing off the flares so quickly his hands were scorched black, skin cracking and peeling to bright red where some powder had spilled onto his fingers; he was not stopping to wipe them clean before setting each flare to the match.

One of the little French dragons darted in again, slashing at Temeraire’s side, and five men fell screaming as a piece of the makeshift carrying-harness unraveled. They vanished at once beyond the lantern-light and were swallowed up in the dark; the long twisted rope of striped silk, a pillaged curtain, unfurled gently in the wind and went billowing down after them, threads trailing from the torn edges. A moan went through the other Prussian soldiers still clinging desperately to the harness, and after it followed a low angry muttering in German.

Any gratitude the soldiers might have felt for their rescue from the siege of Danzig had since been exhausted: three days flying through icy rain, no food but what they had crammed into their pockets in those final desperate moments, no rest but a few hours snatched along a cold and marshy stretch of the Dutch coast, and now this French patrol harrying them all this last endless night. Men so terrified might do anything in a panic; many of them had still their small-arms and swords, and there were more than a hundred of them crammed aboard, to the less than thirty of Temeraire’s own crew.

Laurence swept the sky again with his glass, straining for a glimpse of wings, an answering signal. They were in sight of shore, the night was clear: through his glass he saw the gleam of lights dotting the small harbors all along the Scottish coast, and below heard the steadily increasing roar of the surf. Their flares ought to have been plain to see all the way to Edinburgh; yet no reinforcements had come, not a single courier-beast even to investigate.

“Sir, that’s the last of them,” Calloway said, coughing through the grey smoke that wreathed his head, the flare whistling high and away. The powder-flash went off silently above their heads, casting the white scudding clouds into brilliant relief, reflecting from dragon scales in every direction: Temeraire all in black, the rest in gaudy colors muddied to shades of grey by the lurid blue light. The night was full of their wings: a dozen dragons turning their heads around to look back, their gleaming pupils narrowing; more coming on, all of them laden down with men, and the handful of small French patrol-dragons darting among them.

All seen in the flash of a moment, then the thunderclap crack and rumble sounded, only a little delayed, and the flare dying away drifted into blackness again. Laurence counted ten, and ten again; still there was no answer from the shore.

Emboldened, the French dragon came in once more. Temeraire aimed a swipe which would have knocked the little Pou-de-Ciel flat, but his attempt was very slow, for fear of dislodging any more of his passengers; their small enemy evaded with contemptuous ease and circled away to wait for his next chance.

“Laurence,” Temeraire said, looking round, “where are they all? Victoriatus is in Edinburgh; he at least ought to have come. After all, we helped him, when he was hurt; not that I need help, precisely, against these little dragons,” he added, straightening his neck with a crackle of popping joints, “but it is not very convenient to try and fight while we are carrying so many people.”

This was putting a braver face on the situation than it deserved: they could not very well defend themselves at all, and Temeraire was taking the worst of it, bleeding already from many small gashes along his side and flanks, which the crew could not bandage up, so cramped were they aboard.

“Only keep everyone moving towards the shore,” Laurence said; he had no better answer to give. “I cannot imagine the patrol will pursue us over land,” he added, but doubtfully; he would never have imagined a French patrol could come so near to shore as this, either, without challenge; and how he should manage to disembark a thousand frightened and exhausted men under bombardment he did not like to contemplate.

“I am trying; only they will keep stopping to fight,” Temeraire said wearily, and turned back to his work. Arkady and his rough band of mountain ferals found the small stinging attacks maddening, and they kept trying to turn around mid-air and go after the French patrol-dragons; in their contortions they were flinging off more of the hapless Prussian soldiers than the enemy could ever have accounted for. There was no malice in their carelessness: the wild dragons were unused to men except as the jealous guardians of flocks and herds, and they did not think of their passengers as anything more than an unusual burden; but with malice or none, the men were dying all the same. Temeraire could only prevent them by constant vigilance, and now he was hovering in place over the line of flight, cajoling and hissing by turns, encouraging the others to hurry onwards.

“No, no, Gherni,” Temeraire called out, and dashed forward to swat at the little blue-and-white feral: she had dropped onto the very back of a startled French Chasseur-Vocifère: a courier-beast of scarcely four tons, who could not bear up under even her slight weight and was sinking in the air despite the frantic beating of its wings. Gherni had already fixed her teeth in the French dragon’s neck and was now worrying it back and forth with savage vigor; meanwhile the Prussians clinging to her harness were all but drumming their heels on the heads of the French crew, crammed so tightly not a shot from the French side could fail of killing one of them.

In his efforts to dislodge her, Temeraire was left open, and the Pou-de-Ciel seized the fresh opportunity; this time daring enough to make an attempt at Temeraire’s back. His claws struck so near that Laurence saw the traces of Temeraire’s blood shining black on the curved edges as the French dragon lifted away again; his hand tightened on his pistol, uselessly.

“Oh, let me, let me!” Iskierka was straining furiously against the restraints which kept her lashed down to Temeraire’s back. The infant Kazilik would soon enough be a force to reckon with; as yet, however, scarcely a month out of the shell, she was too young and unpracticed to be a serious danger to anyone besides herself. They had tried as best they could to secure her, with straps and chains and lecturing, but the last she roundly ignored, and though she had been but irregularly fed these last few days, she had added another five feet of length overnight: neither straps nor chains were proving of much use in restraining her.

“Will you hold still, for all love?” Granby said despairingly; he was throwing his own weight against the straps to try and pull her head down. Allen and Harley, the young lookouts stationed on Temeraire’s shoulders, had to go scrambling out of the way to avoid being kicked as Granby was dragged stumbling from side to side by her efforts. Laurence loosened his buckles and climbed to his feet, bracing his heels against the strong ridge of muscle at the base of Temeraire’s neck. He caught Granby by the harness-belt when Iskierka’s thrashing swung him by again, and managed to hold him steady, but all the leather was strung tight as violin strings, trembling with the strain.

“But I can stop him!” she insisted, twisting her head sidelong as she tried to work free. Eager jets of flame were licking out of the sides of her jaws as she tried once again to lunge at the enemy dragon, but their Pou-de-Ciel attacker, small as he was, was still many times her size and too experienced to be frightened off by a little show of fire; he only jeered, backwinging to expose all of his speckled brown belly to her as a target in a gesture of insulting unconcern.

“Oh!” Iskierka coiled herself tightly with rage, the thin spiky protrusions all over her sinuous body jetting steam, and then with a mighty heave she reared herself up on her hindquarters. The straps jerked painfully out of Laurence’s grasp, and involuntarily he caught his hand back to his chest, the numb fingers curling over in reaction. Granby had been dragged into mid-air and was dangling from her thick neck-band, vainly, while she let loose a torrent of flame: thin and yellow-white, so hot the air about it seemed to twist and shrivel away, it made a fierce banner against the night sky.

But the French dragon had cleverly put himself before the wind, coming strong and from the east; now he folded his wings and dropped away, and the blistering flames were blown back against Temeraire’s flank. Temeraire, still scolding Gherni back into the line of flight, uttered a startled cry and jerked away while sparks scattered over the glossy blackness of his hide, perilously close to the carrying-harness of silk and linen and rope. 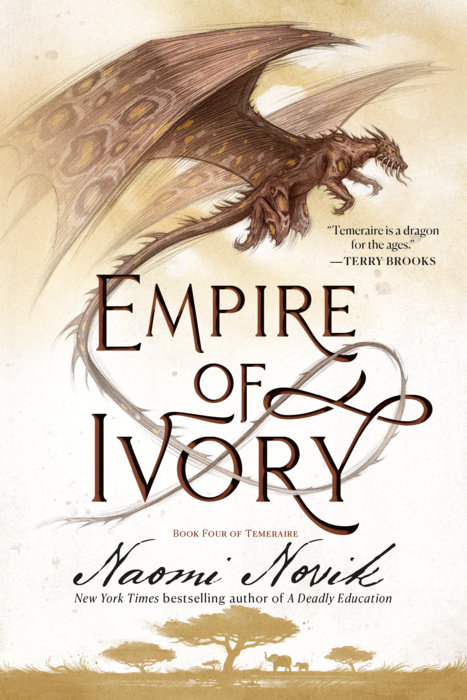