From the New York Times bestselling author of A Deadly Education comes the fifth volume of the Temeraire series, as Will Laurence and Temeraire struggle to reunite and face the Napoleonic army on London's doorstep.

“A story about friendship that transcends not only time and class, but species.”—NPR

For Britain, conditions are grim: Napoleon’s resurgent forces have breached the Channel and successfully invaded English soil. Napoleon’s prime objective is the occupation of London. Unfortunately, the dragon Temeraire has been removed from military service—and his captain, Will Laurence, has been condemned to death for treason.

Separated by their own government and threatened at every turn by Napoleon’s forces, Laurence and Temeraire must struggle to find each other amid the turmoil of war. If only they can be reunited, master and dragon might rally Britain’s scattered resistance forces and take the fight to the enemy as never before, for king and country—and for their own liberty.

An excerpt from Victory of Eagles

The breeding grounds were called Pen Y Fan, after the hard, jagged slash of the mountain at their heart, like an ax-blade, rimed with ice along its edge and rising barren over the moorlands: a cold, wet Welsh autumn already, coming on towards winter, and the other dragons sleepy and remote, uninterested in anything but their meals. There were a few hundred of them scattered throughout the grounds, mostly established in caves or on rocky ledges, wherever they could fit themselves; nothing of comfort or even order provided for them, except the feedings, and the mowed-bare strip of dirt around the borders, where torches were lit at night to mark the lines past which they might not go, with the town-lights glimmering in the distance, cheerful and forbidden.

Temeraire had hunted out and cleared a large cavern, on his arrival, to sleep in; but it would be damp, no matter what he did in the way of lining it with grass, or flapping his wings to move the air, which in any case did not suit his instinctive notions of dignity: much better to endure every unpleasantness with stoic patience, although that was not very satisfying when no-one would appreciate the effort. The other dragons certainly did not.

He was quite sure he and Laurence had done as they ought, in taking the cure to France, and no-one sensible could disagree; but just in case, Temeraire had steeled himself to meet with either disapproval or contempt, and he had worked out several very fine arguments in his defense. Most importantly, of course, it was just a cowardly, sneaking way of fighting: if the Government wished to beat Napoleon, they ought to fight him directly, and not make his dragons sick to try and make him easy to defeat; as if British dragons could not beat French dragons, without cheating. “And not only that,” he added, “but it would not be only the French dragons who died: our friends from Prussia who are imprisoned in their breeding grounds would also have got sick, and perhaps it might even have gone so far as China; and that would be like stealing someone else’s food, even when you are not hungry; or breaking their eggs.”

He made this impressive speech to the wall of his cave, as practice: they had refused to give him his sand-table, and he had no-one of his crew to jot it down for him, either; he did not have Laurence, who would have helped him work out just what to say. So he repeated the arguments over to himself quietly, instead, so he should not forget them. And if these should not suffice to persuade, he thought, he might point out that after all, he had brought the cure back, in the first place: he and Laurence, with Maximus and Lily and the rest of their formation, and if anyone had a right to say where it should be shared out, they did: no-one would even have known of it if Temeraire had not contrived to be sick in Africa, where the mushrooms which cured it grew.

He might have saved the trouble. No-one accused him of anything, nor, as he had privately, a little wistfully, thought just barely possible, hailed him as a hero; because they did not care.

The older dragons, not feral but retired, were a little curious about the latest developments in the war, but only distantly, more inclined to tell over their own battles of earlier wars; and the rest had plenty of indignation over the recent epidemic, but only in a provincial way. They cared that they and their own fellows had sickened and died; they cared that the cure had taken so long to reach them; but it did not mean anything to them that dragons in France had also been ill, or that the disease would have spread, killing thousands, if Temeraire and Laurence had not taken over the cure; they also did not care that the Lords of the Admiralty had called it treason, and sentenced Laurence to die.

They had nothing to care for. They were fed, and there was enough for everyone. If the shelter was not pleasant, it was no worse than what even the retired dragons were used to, from the days of their active service; they had none of them even heard of a pavilion, or thought they might be made more comfortable than they were. No-one ever molested an egg; the grounds-keepers would take them away, but with infinite care, in waggons lined with straw, hot-water bottles and woolen blankets in the wintertime; and they would bring back reports until the eggs were hatched and no more of anyone’s concern; so everyone knew the eggs were safe in their hands; safer, even, than keeping them oneself, so even the dragons who had not cared to take a captain themselves, at all, would often as not hand over their own eggs. They could not go flying very far, because they were fed at no set time but randomly, from day to day, so if one went away out of ear-shot of the bells, one was likely to come too late, and go hungry all the day. So there was no larger society, no intercourse with the other breeding grounds or with the coverts, except when some other dragon came from afar, to mate; even that was arranged for them. Instead they sat, willing prisoners in their own territory, Temeraire thought bitterly; he would never have endured it if not for Laurence, only for Laurence, who would surely be put to death at once if Temeraire did not obey.

He held himself aloof from their society at first. There was his cave to be arranged: despite its fine prospect it had been left vacant for being inconveniently shallow, and he was rather crammed-in; but there was a much larger chamber beyond, visible through holes in the back wall, which he gradually opened up with the slow and cautious use of his roar. Slower, even, than perhaps necessary—he was very willing to have the task consume several days. The cave had then to be cleared of debris, old gnawed bones and inconvenient boulders, which he scraped out painstakingly even from the corners too small for him to lie in, for neatness’ sake; and he found a few rough boulders in the valley and used them to grind the cave walls a little smoother, by dragging them back and forth, throwing up a great cloud of dust.

It made him sneeze, but he kept on; he was not going to live in a raw untidy hole. He knocked down stalactites from the ceiling, and beat protrusions flat into the floor, and when he was satisfied, he arranged along the sides of what was now his antechamber, with careful nudges of his talons, some attractive rocks and old, dead tree-branches, twisted and bleached white, which he had collected from the woods and ravines. He would have liked a pond and a fountain, but he could not see how to bring the water up, or how to make it run when he had got it there, so he settled for picking out a promontory on Llyn y Fan Fawr which jutted into the lake, and considering it also his own.

To finish he carved the characters of his name into the cliff face by the entrance, and also in English, although the letter R gave him some difficulty and came out looking rather like the reversed numeral 4; then he was done with that, and routine crept up and devoured his days. To rise, when the sun came in at the cave-mouth; to take a little exercise, to nap, to rise again when the herdsmen rang the bell, to eat, then to nap and to exercise again, and then back to sleep; and that was the end of the day, there was nothing more. He hunted for himself, once, and so did not go to the daily feeding; later that day one of the small dragons brought up the grounds-master, Mr. Lloyd, and a surgeon, to be sure that he was not ill; and they lectured him on poaching sternly enough to make him uneasy for Laurence’s sake.

For all that, Lloyd did not think of him as a traitor, either; did not think enough of him to consider him one. The grounds-master only cared about his charges so far as they all stayed inside the borders, and ate, and mated; he recognized neither dignity nor stoicism, and anything which Temeraire did out of the ordinary was only a bit of fussing. “Come now, we have a fresh lady Anglewing visiting to-day,” Lloyd would say, jocularly, “quite a nice little piece; we will have a fine evening, eh? Perhaps we would like a bite of veal, first? Yes, we would, I am sure,” providing the responses with the questions, so Temeraire had nothing to do but sit and listen; and as Lloyd was a little hard of hearing, if Temeraire did try to say, “No, I would rather have some venison, and you might roast it first,” he was sure to be ignored.

It was almost enough to put one off making eggs, and in any case Temeraire was growing uncomfortably sure that his mother would not have approved in the least, how often they wished him to try, and how indiscriminately. Lien would certainly have sniffed in the most insulting way. It was not the fault of the female dragons sent to visit him, they were all very pleasant, but most of them had never managed an egg before, and some had never even been in a real battle or done anything interesting at all. So then they were embarrassed, as they did not have any suitable present for him which might have made up for it; and it was not as though he could pretend that he was not a very remarkable dragon, even if he liked to. Which he did not, very much, although he would have tried for Bellusa, a poor young Malachite Reaper without a single action to her name, sent by the Admiralty from Edinburgh, who miserably offered him a small knotted rug, which was all her confused captain would afford: it might have made a blanket for Temeraire’s largest talon. 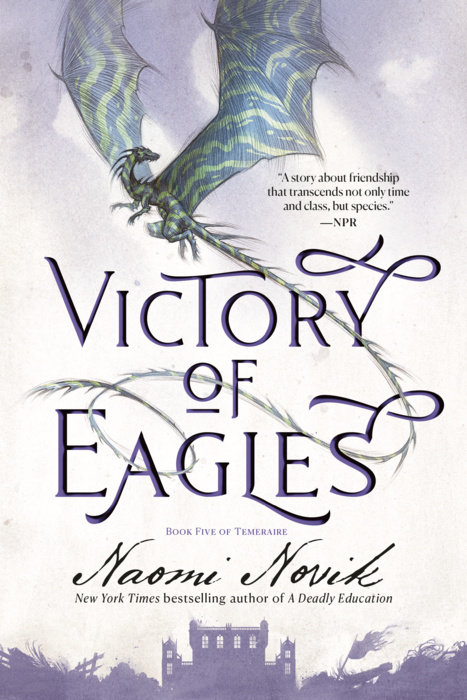