Sailing with Jason and the Argonauts, Ulysses, the Vikings, and Other Explorers of the Ancient World

The story of Jason and the Argonauts and Homer's tales of Ulysses' wanderings are among the greatest of the ancient epics, but they are not merely fiction. Following the clues in the classical texts, Mauricio Obregón here maps the likely routes of these adventurers and reveals the remaining traces of the things and places they describe, re-creating the geographical discovery of the ancient world.

Obregón takes us with him on his reenactments of the hazardous adventures of Jason, sailing east along the coast of the Black Sea, and of Ulysses, sailing clockwise around the Mediterranean. These voyages map the two major seas of the ancient era and help us understand how the Greeks viewed their world — including the many startling deductions they were able to make about it (such as the circumference of the earth) from what today seems like limited knowledge.

Obregón has also traced the voyages depicted in the Norse legends, followed adventurous Muslims on southern journeys, and emulated the Polynesians who managed to traverse the seemingly limitless Pacific. He scrutinizes every detail of sailing in ancient times, such as the mechanics of navigation: The stars, for example, which the mariners took as their guides, were not in the positions that we see them in today, a crucial fact in re-creating past voyages.

This wonderful book contains more than forty drawings and photographs, including depictions of the explorers' ships based on the descriptions in the literature that has come down to us, the facts hidden in the fiction, from ancient times.

An excerpt from Beyond the Edge of the Sea

History is a symphony of myths and legends. From the beginning, man's intelligence sketched the myths that would enable him to explain what he discovered, and from these myths collective memory built the legends that would make it possible to pass on the story.

When the Argonauts sailed east across the Black Sea to the Caucasus, and Odysseus west to the Pillars of Hercules, they broadened the limits of an earthbound sea already teeming with myths; and their adventures were handed down from generation to generation until Homer's poetry molded them at last into history. When the Polynesians sailed east across the Pacific to Easter Island and west across the Indian Ocean to Madagascar, their legends also went with them, but, unfortunately, they lacked a bard. Greeks and Polynesians, two antipodal peoples, explored more than half the world, yet they never met. They were very different, but their gods and their stars had much in common, for man seems to find similar solutions to similar problems wherever he may be.

The Greeks lived in walled cities, usually dominated by an acropolis, and their homes looked inward, not at the street but at an enclosed courtyard. The Polynesians, on the other hand, lived under wide thatched roofs, held up by open colonnades of palm wood. Their villages stood near the beach and generally included a house for meetings and for visitors, the manaeba. Though the Greeks watched jealously over their families and their property, the Polynesians usually owned at most a palm mat on which to sleep, with perhaps a small coffer at its head for a few belongings; all the rest was owned by the tribe. The Greeks buried their dead deep under great tumuli, such as can still be seen in Mycenae; the Polynesians buried them in small tombs right in front of their houses, and their children played on the tombs.

Each people sailed in character with the way each lived. The prudent Greeks usually sailed along coasts or toward the visible peaks of high islands, preferably in daytime and in summer. At night, or when the weather threatened, they pulled their ships up on the beach, singing to the rhythm of the waves, which helped raise the ship out of the water. (Caribbean fishermen still do this.) The Polynesians, on the contrary, were blue-water sailors, always ready to probe the deep.

Homer's world was a green ring of earth surrounding the known seas, the eastern Mediterranean and the Aegean. Around this world roared the Infinite Ocean, which fed the seas through two Rivers of Ocean, one from the east, where Helios, the Sun, rose from the Elysian Fields, and the other from the west, where he descended into Hades. The Polynesians' world, on the other hand, was the all-encompassing Ocean.

Mythology and its daughter, science, have always known whence life first came. To those who listen, the Gregorian chant of the waves speaks as clearly of gods as does the multitudinous rocking of the atoms, and it was out of the Infinite Ocean that the gods arose. In Babylon and in Egypt, Nun and Apsú floated above the all-encircling waters. In Hesiod's theogony and in Homer, Gaia, the Earth, and Uranus, the Sky, were born of Ocean, which was chaos, and engendered all the gods. For Polynesians it all began with Io, the waters; and the waters begot Rangui, the heavens, and Paapa, the earth. Even in Genesis, the Spirit of God moved first over the waters. And the Kogi Indians, Colombia's great mythologists, begin their story of creation with these words: "When all was dark, our mother was the Sea."

Having flown formation with an eagle down the god-infested canyon of Delphi, I myself need no further evidence for the ancient legends, and Homer's gods are easy to understand. But they are difficult to explain because the very word God obstructs the explanation in modern terms. The Greek gods are not otherworldly spirits but an integral part of society, an essentially feudal one in which everyone is subject to a superior being, or master of an inferior. There are servants, squires, chieftains, kings, tutelary spirits, nymphs, demigods, and gods; and within this framework one might do better to speak of "overlords" than of gods.

Since they form part of a tightly knit hierarchy, the Greek gods are always present to illuminate everyday things like bread and wine and death, with that transcendence necessary to sanity that we so lack today. When they want to be equivocal they use omens and signs, such as those that are interpreted through bird lore; but when they wish to be clearly understood they simply disguise themselves as men or women and speak. There is no question as to the gods' existence; the only question concerns their unpredictable behavior, for they are imperfect gods, and therefore quite real. One might say that whereas we have to make do with an imperfect faith in a perfect God, the Greeks were more comfortable with their perfect faith in imperfect gods. It is always difficult to seek perfection without first making one's peace with imperfection.

These imperfect gods act exactly as such, their always human reactions simply magnified by their wonderful powers, unlimited by the laws of nature but often limited by the desires and actions of another god. This has quite distinct advantages, not the least of which is that the gods, in order to avoid chaos, must enter into contracts or covenants not only with one another but also with men, thus laying the foundation for all subsequent justice by simple do ut des (tit for tat). This tradition lasts all the way to the covenants that underlie the Jewish, the Christian, and the Muslim faiths. In a world thus ordered, men also live according to a series of bilateral agreements with other men and simply pay the price whenever an agreement is broken, or, in the last resort, blame the gods. They can afford to live by a moral code (mores means "manners") rather than by what we would call ethics, and they can be virtuous and noble for reasons more sensible than the nagging avoidance of a sense of guilt. Revenge is to be feared more than guilt, and since an offense only breaks a bilateral contract, a third party such as the state can be quite lenient. We, on the other hand, always seem ready to unload our problems on the state and to throw morals out of the window, the young bent on replacing manners with fashion; the old, morals with money.

Mauricio Obregón was a Colombian ambassador to the Caribbean, Venezuela, and the O.A.S. He was founder and president of the Caribbean Naval Museum in Cartagena, and a member of the academies of history of Colombia and of Spain.

He retraced, under sail and in the air, fourteen voyages of discovery and followed space flights from the NASA control center. He held the Chair of History of Discovery at the University of the Andes, Bogota, of which he was president, and lectured at universities worldwide, from Harvard (where he was elected to its Board of Overseers) to Dubrovnik.

In addition to publishing a dozen books, including The Caribbean as Columbus Saw It, he narrated the international TV series Columbus and the Age of Discovery, was a test-flight captain at Grumman, was president of the International Aviation Federation, and held for a time the world's light-plane speed record.

As a friend and companion to Samuel Eliot Morison, he helped determine the voyages of Columbus and wrote the Foreword to Morison's Admiral of the Ocean Sea. Mauricio Obregón died in 1998, just after completing Beyond the Edge of the Sea.

Sailing with Jason and the Argonauts, Ulysses, the Vikings, and Other Explorers of the Ancient World 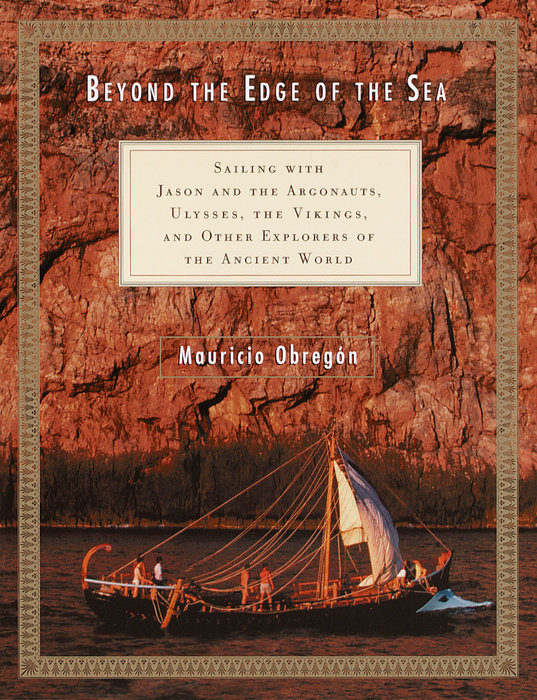