The Ornish Diet has been named the “#1 best diet for heart disease” by U.S. News & World Report for seven consecutive years!

Dr. Dean Ornish is the first clinician to offer documented proof that heart disease can be halted, or even reversed, simply by changing your lifestyle. Based on his internationally acclaimed scientific study, which has now been ongoing for years, Dr. Ornish's program has yielded amazing results. Participants reduced or discontinued medications; they learned how to lower high blood pressure; their chest pain diminished or disappeared; they felt more energetic, happy, and calm; they lost weight while eating more; and blockages in coronary arteries were actually reduced.

In his breakthrough book, Dr. Ornish presents this and other dramatic evidence and guides you, step-by-step, through the extraordinary Opening Your Heart program, which is winning landmark approval from America's health insurers. The program takes you beyond the purely physical side of health care to include the psychological, emotional and spiritual aspects so vital to healing. This book represents the best modern medicine has to offer. It can inspire you to open your heart to a longer, better, happier life.

1
“Why Don’t You Do Something
More Conventional?”

“Who are you gonna believe, me or your own eyes?”
—Groucho Marx, in Duck Soup

“Not everything that counts can be counted.”
—Denis Burkitt, M.D., in The Cancer Survivors

“Keep an open mind, but not so open that your brains fall out.”
—Unknown”

Forty million people in this country suffer from diagnosed cardiovascular disease, and an even larger number don’t yet know that they have a heart problem. Sixty million people have high blood pressure. Eighty million have elevated cholesterol levels. Over 1.5 million Americans have heart attacks every year. And for almost one third of them, having a heart attack was their first indication that they had a heart problem— clearly, not the best way to find out.

Although lifestyle factors play a major role in all of these, I was trained to treat hypertension, high levels of blood cholesterol, and coronary heart disease primarily by prescribing drugs. Yet increasing evidence indicates that medications to lower blood pressure and cholesterol prevent or reverse heart disease in only a small percentage of people. These drugs sometimes make people worse. And moderate dietary changes are not enough to reverse heart disease for most people.

Faced with this new information, many people are beginning to wonder, “Well, why bother? There’s not much I can do to make a difference. Bring out the bacon and eggs!”

Fortunately, my colleagues and I are finding that the comprehensive lifestyle program described in this book can lower cholesterol and blood pressure more than has ever been reported without drugs and can even begin to reverse severe coronary heart disease in many people without using cholesterol-lowering drugs or surgery. Of course, none of us is going to live forever, but we don’t have to suffer the premature death, disability, and cost that come from heart disease.

I first became interested in conducting research on heart disease in 1975 when I was a medical student at the Baylor College of Medicine in Houston. In 1977, I had the privilege of studying with Dr. Michael DeBakey, assisting in the operating room when he performed coronary bypass surgery. His surgical skill was amazing, the technology was impressive, and the circumstances were dramatic. After a while, though, I became a little disheartened as I saw the limitations of technological approaches that literally and figuratively bypassed the underlying causes of the problem. It was the difference between temporizing and healing.

Bypass surgery became, for me, a metaphor for the inadequacy of treating a problem without also addressing the underlying causes. We would operate on patients, their chest pain would usually go away, and they were told that they were cured. Most would go home and continue to do the same things that led to the problem in the first place. They would smoke, eat a high-fat, high-cholesterol diet, manage stress poorly, and lead sedentary lives.

At that time, even the hospital had several cigarette machines in the lobby, and just about the only foods available in the hospital cafeteria were cheeseburgers, fried fish, and french fries. In many hospitals, it’s still that way. Some even have McDonald’s or Burger King franchises right in the hospital. (Now, though, Baylor has a lowfat gourmet restaurant.) Several years ago, Dr. Robert Wissler, an eminent pathologist at the University of Chicago, fed his patients’ regular hospital diet to baboons. The baboons developed arterial blockages.

I began to wonder: What would happen if, instead of bypassing the problem, patients began to change what seemed to be the underlying causes of their heart disease?

Each investigator worked in his or her own area—for example, Dr. Herbert Benson studied meditation, Dr. Ralph Paffenbarger studied exercise, Dr. Frank Sacks studied diet, and so on. Surprisingly, no one at that time had studied a comprehensive lifestyle program that used all of these lifestyle interventions, and no one had examined the effects of these lifestyle changes not only on risk factors such as cholesterol and blood pressure but also, more importantly, the effects of a comprehensive lifestyle program on the underlying heart disease process.

It seemed like an exciting opportunity, so in 1977 I decided to take a year off between my second and third years of medical school in order to conduct a small pilot study of ten patients using this combined lifestyle program. The Chief of Medicine, Dr. Antonio Gotto, was very supportive and provided most of the testing facilities, and the Franzheim Synergy Trust provided a grant to help support the study. The Plaza Hotel in Houston donated ten rooms to us for one month.

One of the advantages of being a second-year medical student was that I hadn’t had enough clinical experience to be jaded, to know that it was “impossible” to reverse heart disease, so I told the patients that this program might help them get better. Since most of them had heard from their physicians that their heart disease was only likely to stabilize or worsen over time—the so-called natural history of the disease process—I was unwittingly giving many of them hope for the first time since their illness had been diagnosed.

It was hard to find eligible patients. We were looking for people who had documented coronary heart disease and chest pain but who were not going to have bypass surgery. More bypass surgery is performed in Houston than anywhere in the world, so if a patient had anigiographically documented heart disease and chest pain, then most of the time he or she underwent bypass surgery. As a result, we had to look through over ten thousand patients’ charts to find even one hundred patients who were eligible for the study.

Eventually, ten people volunteered. They all experienced remarkable improvements after one month on our program. People who had had incapacitating chest pain with even minimal exertion—showering, shaving, gentle sexual activity, walking short distances—became essentially pain-free and were able to do all of these activities without difficulty. In most cases, these improvements began to occur after only a few days.

Many of those who had been out of work for years now were able to return to work full-time. Everyone reported feeling more energy, less depression, and a greater sense of well-being.

The participants’ cholesterol levels dropped significantly. Their blood pressures decreased so much that we often had to reduce or even discontinue the anti-hypertensive medications that many of them had been taking for many years (and had been told they would need to take for the rest of their lives). Exercise capability improved in everyone.”

Most participants not only felt better, they were better. We used what was at that time a new test called an exercise thallium scan, a type of nuclear medicine study now in use in most hospitals. This test noninvasively measured how much blood flow the heart received. Using this test, we found that most patients showed significant improvements in coronary blood flow—after only thirty days!

This was thought by most doctors to have been impossible—“There must be some mistake,” many of them told us at the time. “The tests must be wrong.” Nuclear medicine tests such as the thallium scan were sometimes called “unclear medicine” by doctors because the images were not always 100 percent reliable—although they were accurate enough to serve as the basis for clinical decisions every day. Since the pilot study hadn’t included a randomized control group for comparison, some critics asked, “How do you know that patients wouldn’t have gotten better anyway?” even though it would have been highly unusual for anyone’s thallium scan to improve without drugs or surgery. Nevertheless, we published a summary of our results in the journal Clinical Research. A few years later, similar improvements in blood flow and function were found in studies by Dr. Gerhard Schuler in West Germany, by Dr. William Haskell at Stanford, and by Dr. Victor Froelicher in San Diego.

I then learned that a few physicians (including Dr. Lester Morrison, Dr. William Castelli, Dr. Walter Kempner, and others) and some laypeople such as Nathan Pritikin speculated that coronary artery blockages could be reversed in humans by a low-fat diet and exercise, whereas most cardiologists dismissed this idea as a lot of nonsense. Unfortunately, there was little scientific evidence to prove or refute these claims, so the public became confused and the medical community became polarized. Other physicians such as Dr. Robert Eliot, Dr. Carl Simonton, and Dr. Βernie Siegel and people such as Jeanne Achterberg, Joan Borysenko, and Norman Cousins discussed in their books and lectures the importance of managing emotional stress and interventions such as visualization in treating chronic diseases. Again, due to the lack of scientific proof, there were more debates, misunderstandings, and disagreements.

Dean Ornish, M.D., is the founder and president of the nonprofit Preventive Medicine Research Institute and clinical professor of medicine at the University of California, San Francisco, and also clinical professor of medicine at the University of California, San Diego. Dr. Ornish was trained in internal medicine at the Baylor College of Medicine, Harvard Medical School, and the Massachusetts General Hospital. His research has been published in the leading peer-reviewed medical journals, including the Journal of the American Medical Association, The Lancet, and The New England Journal of Medicine. His work has been featured in all major media, including cover stories in Newsweek, Time, and U.S. News & World Report. He has received numerous awards, including the 1994 Outstanding Young Alumnus Award from the University of Texas, Austin, and the National Public Health Hero Award from the University of California, Berkeley. Dr. Ornish is the medical editor for the Huffington Post and his TED talks have been viewed by more than 5 million people. The author of six books, all national bestsellers, he was recognized by Life magazine as “one of the 50 most influential members of his generation” and by Forbes magazine as “one of the world’s seven most powerful teachers.”  Dr. Ornish lives in the San Francisco area with his wife and partner, Anne, and children, Lucas (Luke) and Jasmine (Jazz). 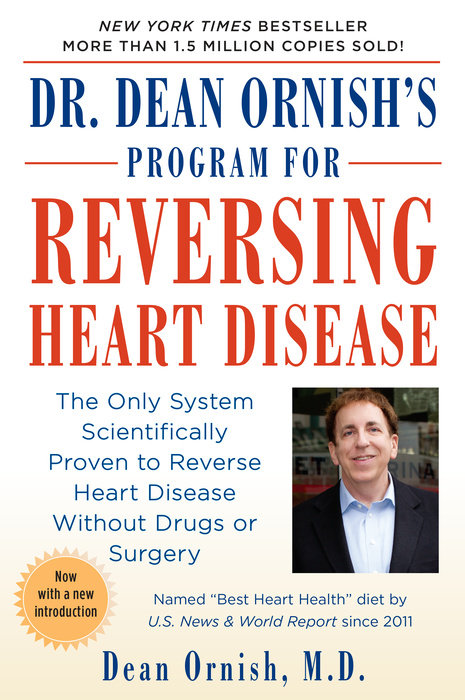