A provocative study of the gnostic gospels and the world of early Christianity as revealed through the Nag Hammadi texts.

An excerpt from The Gnostic Gospels

The Controversy over Christ’s Resurrection: Historical Event or Symbol?

“JESUS CHRIST ROSE from the grave.” With this proclamation, the Christian church began. This may be the fundamental element of Christian faith; certainly it is the most radical. Other religions celebrate cycles of birth and death: Christianity insists that in one unique historical moment, the cycle reversed, and a dead man came back to life! For Jesus’ followers this was the turning point in world history, the sign of its coming end. Orthodox Christians since then have confessed in the creed that Jesus of Nazareth, “crucified, dead, and buried,” was raised “on the third day.” Many today recite that creed without thinking about what they are saying, much less actually believing it. Recently some ministers, theologians, and scholars have challenged the literal view of resurrection. To account for this doctrine, they point out its psychological appeal to our deepest fears and hopes; to explain it, they offer symbolic interpretations.

But much of the early tradition insists literally that a man—Jesus—had come back to life. What makes these Christian accounts so extraordinary is not the claim that his friends had “seen” Jesus after his death—ghost stories, hallucinations, and visions were even more commonplace then than now—but that they saw an actual human being. At first, according to Luke, the disciples themselves, in their astonishment and terror at the appearance of Jesus among them, immediately assumed that they were seeing his ghost. But Jesus challenged them: “Handle me and see, for a spirit does not have flesh and bones, as you see that I have.” Since they remained incredulous, he asked for something to eat; as they watched in amazement, he ate a piece of broiled fish. The point is clear: no ghost could do that.

Had they said that Jesus’ spirit lived on, surviving bodily decay, their contemporaries might have thought that their stories made sense. Five hundred years before, Socrates’ disciples had claimed that their teacher’s soul was immortal. But what the Christians said was different, and, in ordinary terms, wholly implausible. The finality of death, which had always been a part of the human experience, was being transformed. Peter contrasts King David, who died and was buried, and whose tomb was well known, with Jesus, who, although killed, rose from the grave, “because it was not possible for him to be held by it”—that is, by death.3 Luke says that Peter excluded metaphorical interpretation of the event he said he witnessed: “[We] ate and drank with him after he rose from the dead.”

Tertullian, a brilliantly talented writer (A.D. C. 190), speaking for the majority, defines the orthodox position: as Christ rose bodily from the grave, so every believer should anticipate the resurrection of the flesh. He leaves no room for doubt. He is not, he says, talking about the immortality of the soul: “The salvation of the soul I believe needs no discussion: for almost all heretics, in whatever way they accept it, at least do not deny it.” What is raised is “this flesh, suffused with blood, built up with bones, interwoven with nerves, entwined with veins, (a flesh) which … was born, and … dies, undoubtedly human.” Tertullian expects the idea of Christ’s suffering, death, and resurrection to shock his readers; he insists that “it must be believed, because it is absurd!”

Yet some Christians—those he calls heretics—dissent. Without denying the resurrection, they reject the literal interpretation; some find it “extremely revolting, repugnant, and impossible.” Gnostic Christians interpret resurrection in various ways. Some say that the person who experiences the resurrection does not meet Jesus raised physically back to life; rather, he encounters Christ on a spiritual level. This may occur in dreams, in ecstatic trance, in visions, or in moments of spiritual illumination. But the orthodox condemn all such interpretations; Tertullian declares that anyone who denies the resurrection of the flesh is a heretic, not a Christian.

Why did orthodox tradition adopt the literal view of resurrection? The question becomes even more puzzling when we look at what the New Testament says about it. Some accounts, like the story we noted from Luke, tell how Jesus appears to his disciples in the form they know from his earthly life; he eats with them, and invites them to touch him, to prove that he is not a ghost.” John tells a similar story: Thomas declares that he will not believe that Jesus had actually risen from the grave unless he personally can see and touch him. When Jesus appears, he tells Thomas, “Put your finger here, and see my hands; and put out your hand, and place it in my side; do not be faithless, but believing.” But other stories, directly juxtaposed with these, suggest “different views of the resurrection. Luke and Mark both relate that Jesus appeared “in another form”—not his former earthly form—to two disciples as they walked on the road to Emmaus. Luke says that the disciples, deeply troubled about Jesus’ death, talked with the stranger, apparently for several hours. They invited him to dinner; when he sat down with them to bless the bread, suddenly they recognized him as Jesus. At that moment “he vanished out of their sight.” John, too, places directly before the story of “doubting Thomas” another of a very different kind: Mary Magdalene, mourning for Jesus near his grave, sees a man she takes to be the gardener. When he speaks her name, suddenly she recognizes the presence of Jesus—but he orders her not to touch him.

So if some of the New Testament stories insist on a literal view of resurrection, others lend themselves to different interpretations. One could suggest that certain people, in moments of great emotional stress, suddenly felt that they experienced Jesus’ presence. Paul’s experience can be read this way. As he traveled on the Damascus road, intent on arresting Christians, “suddenly a light from heaven flashed about him. And he fell to the ground,” hearing the voice of Jesus rebuking him for the intended persecution. One version of this story says, “The men who were traveling with him stood speechless, hearing the voice, but seeing no one”; another says the opposite (as Luke tells it, Paul said that “those who were with me saw the light, but did not hear the voice of the one who was speaking to me”). Paul himself, of course, later defended the teaching on resurrection as fundamental to Christian faith. But although his discussion often is read as an argument for bodily resurrection, it concludes with the words “I tell you this, brethren: flesh and blood cannot inherit the kingdom of God, nor does the perishable [that is, the mortal body] inherit the imperishable.” Paul describes the resurrection as “a mystery,” the transformation from physical to spiritual existence.

If the New Testament accounts could support a range of interpretations, why did orthodox Christians in the second century insist on a literal view of resurrection and reject all others as heretical? I suggest that we cannot answer this question adequately as long as we consider the doctrine only in terms of its religious content. But when we examine its practical effect on the Christian movement, we can see, paradoxically, that the doctrine of bodily resurrection also serves an essential political function: it legitimizes the authority of certain men who claim to exercise exclusive leadership over the churches as the successors of the apostle Peter. From the second century, the doctrine has served to validate the apostolic succession of bishops, the basis of papal authority to this day. Gnostic Christians who interpret resurrection in other ways have a lesser claim to authority: when they claim priority over the orthodox, they are denounced as heretics.

Such political and religious authority developed in a most remarkable way. As we have noted, diverse forms of Christianity flourished in the early years of the Christian movement. Hundreds of rival teachers all claimed to teach the “true doctrine of Christ” and denounced one another as frauds. Christians in churches scattered from Asia Minor to Greece, Jerusalem, and Rome split into factions, arguing over church leadership. All claimed to represent “the authentic tradition.”

How could Christians resolve such contrary claims? Jesus himself was the only authority they all recognized. Even during his lifetime, among the small group traveling through Palestine with him, no one challenged—and no one matched—the authority of Jesus himself. Independent and assertive a leader as he was, Jesus censured such traits among his followers. Mark relates that when James and John came to him privately to ask for special positions in his administration, he spoke out sharply against their ambition:

Elaine Pagels is the Harrington Spear Paine Foundation Professor of Religion at Princeton University. She is the author of several books, including Reading Judas: The Gospel of Judas and the Shaping of Christianity, the New York Times bestseller Beyond Belief: The Secret Gospel of Thomas, and The Gnostic Gospels, winner of the National Book Critics Circle Award and the National Book Award. Professor Pagels lives in Princeton, New Jersey. 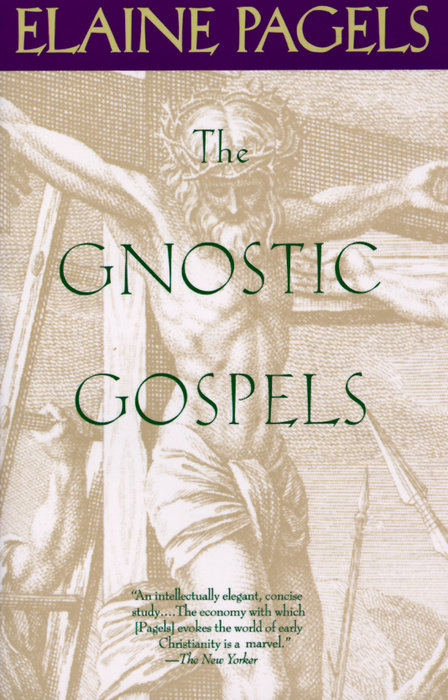